From the world's tallest dog to its most dangerous ant, you'll find the fastest, tallest, oldest, strangest and most awesome species from the animal kingdom right here. And if you want more, pick up our books - Amazing Animals and Wild Things - which celebrate the most incredible creatures on Earth.

Watch the likes of the biggest horse in the world, Big Jake the horse and Corduroy, one of the oldest cats ever measured

Tallest cat and longest tail ever

Meet Blosom the tallest cow ever

Most bird species in an aviary

Loudest purr by a domestic cat

Loading...
Meet the smallest horse in the world that's shorter than a greyhound
Humphrey - the world’s shortest bull who is only 67 cm tall
Horns of plenty: steer from Alabama has horn span wider than the Statue of Liberty’s face!
An introduction to the biggest crocodile ever that makes today's crocs look tiny
Twin pandas born in China make history in conservation first
The animal from which great whites flee: 5 killer records held by orcas
A history of the biggest and smallest dog breeds – from giant Great Danes to tiny Chihuahuas
Introducing Jonathan, the world’s oldest animal on land at 187 years old 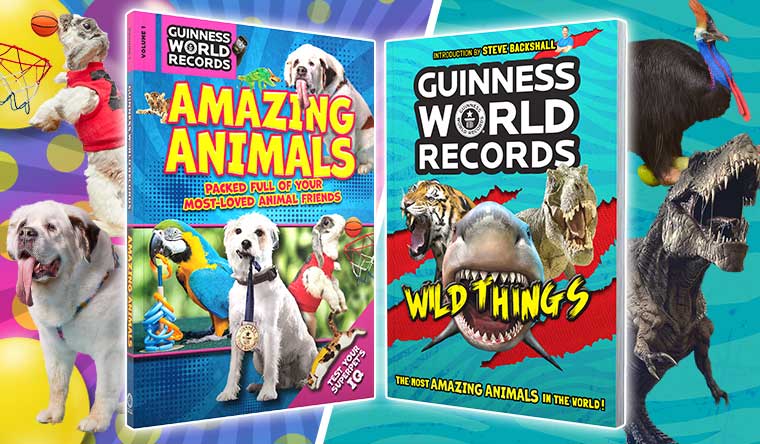 From talented pets to extreme wildlife, animals are always among our most popular record-breakers. Guinness World Records has records for everything from the largest dinosaurs and nature’s fastest and deadliest beasts, to skateboarding dogs, furry felines, leaping llamas and phenomenal farm animals. Find out more about these incredible records and stories in two dedicated animal record books: Wild Things and Amazing Animals.

Try out our amazing animal online games! Bring creepy-crawlies to life, or your very own record-breaking animal or see how many hoops you can shoot in Basketball Bunny.

Images of record-breaking animals from all over the world

Based upon current research results, the world's most venomous lizard is the Gila monster Heloderma…

The world's largest living species of penguin is the emperor penguin ( Aptenodytes forsteri ),…

The largest mammal to construct a nest is the gorilla ( Gorilla gorilla ) of Africa, where adult…

The largest of all the carnivores is the polar bear ( Ursus maritimus ). Adult males typically weigh…

The largest species of sea turtle ever known to have existed was Archelon ischyros , which lived…

The largest parade of alpacas consisted of 1,048 alpacas, and was achieved by Comite FEGASUR 2019…