Horns of plenty: steer from Alabama has horn span wider than the Statue of Liberty’s face!

A seven-year-old Texas longhorn from Alabama, USA, has earned a place in the record books thanks to his humongous horns.

Poncho lives on a ranch in the small town of Goodwater – south-east of Birmingham, Alabama – where he has been raised since he was a weanling by the Pope family. 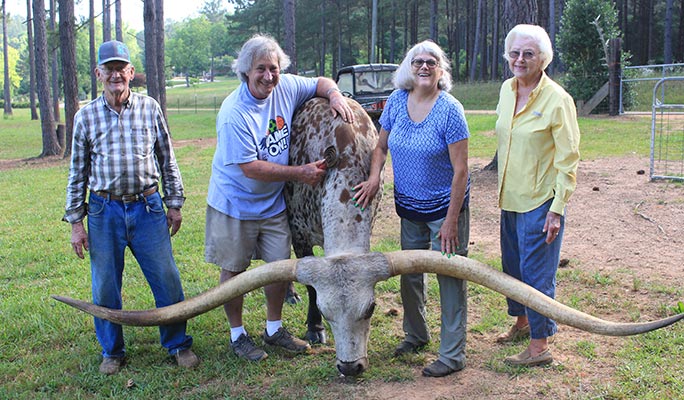 The Popes have been avidly following this record category for several years. Their "Could we have a record-breaker?" moment arose when Poncho was aged around four, after they noticed that their steer’s horns were not curving up like those of most longhorns, but instead growing straight out. 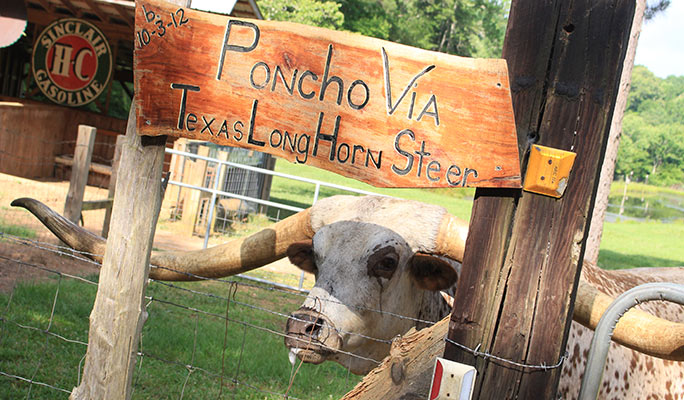 The family's instinct that Poncho could be a record holder was borne out last month, when Guinness World Records approved the measurements of his rack. His horn tip span supersedes that of the previous record holder – a fellow longhorn steer called Sato, from Texas – by just over an inch. 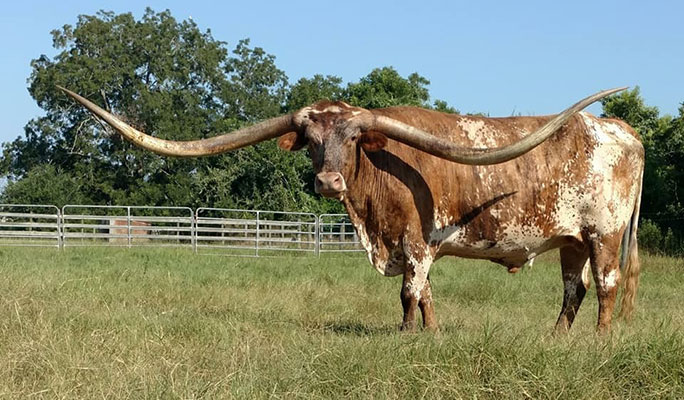 Poncho’s owner Jeral Pope recalls the first time he ever set eyes on this striking breed: "My wife and I went somewhere out west, riding a hay wagon. Up on the hill, outlined against the sky, were three or four longhorns. They stood out like anything on the crest of that mountain – it was the prettiest thing. I told my wife, we got to have one of them." 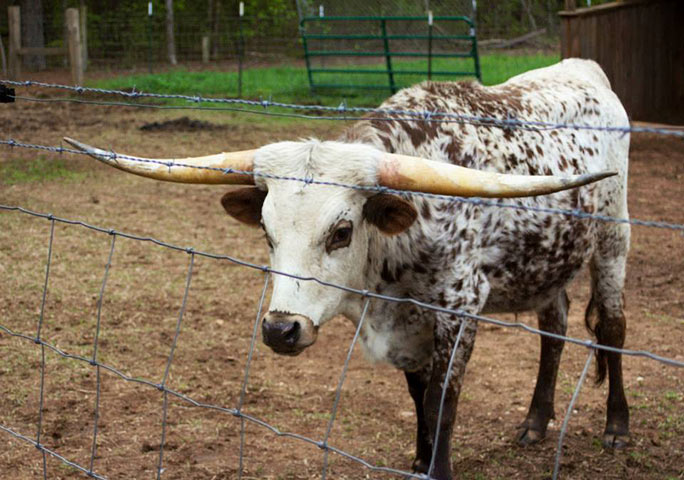 "He was six months old when I got him. I named him Poncho Via, after the [1960s] TV and movie character [based on the early-20th-century Mexican revolutionary, Pancho Villa].”

Not surprisingly, Poncho has become something of a local celebrity in Clay County, as Jeral explained: "All my neighbours round here, any time they have company, they come over to see the longhorn. He’s just a big, gentle character. Everyone brings [food] with them – he likes apples, carrots and marshmallows." 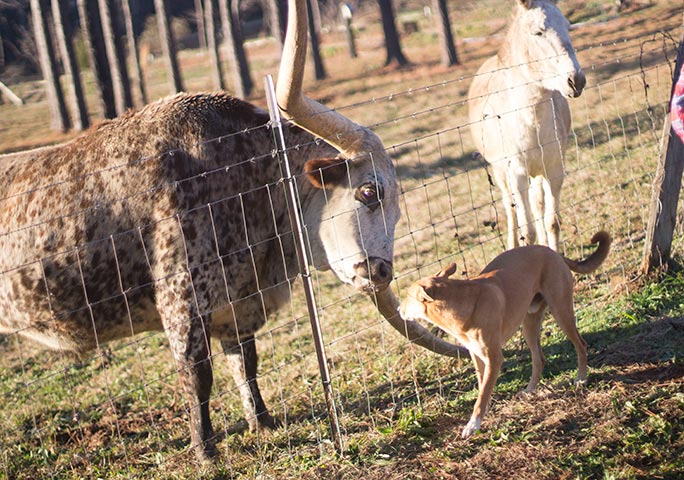 While his horns might look intimidating, the family insist that their steer is a big softie at heart. "He's just a big pet," said Jeral's son, Dennis (aka Jeral Pope Junior). "He's had so many people over the years stop by to see him, feeding him treats, that he’s turned into a wonderful big pet."

For Dennis, the record is not only an accolade for Poncho but a testament to his father’s vision and community spirit: "[Dad] likes to bring that positive influence to his family and to the community. Poncho brings an opportunity for a different level of 15 minutes of fame.

"Unfortunately, this is one of the poorest counties in the state of Alabama, [but] now it's got [the] claim to fame of having the world record longhorn steer." 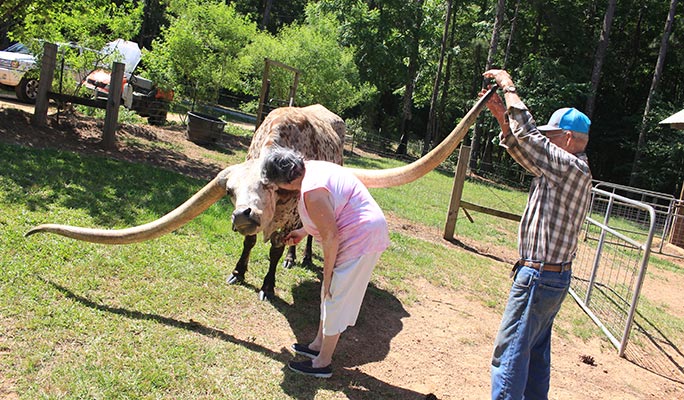 George Jones, another member of the family who works on the ranch and helps look after Poncho, reveals that the longhorn has calmed down with age: "Back when he was younger… he [only] had small horns, but he would get frisky… bucking and snorting and charging… But he's mellowed out as the years have gone by… and pretty much walks where he wants to go nowadays instead of running."

While Poncho has never hurt anyone with his horns intentionally, the unwieldy appendages have occasionally proven a liability – as Jones knows all too well. "One day, I was out fishing and Poncho came up behind me…" he begins to recount ruefully.

"He pulled a water bottle right out my pocket with his tongue. He's there playing with the bottle and I reached and scratched him for a bit…

"That went on for a little while and I guess a horsefly got on him or something [because], all of a sudden, he turned that head and I went airborne into the pond! He just knocked me completely off my feet into the water." 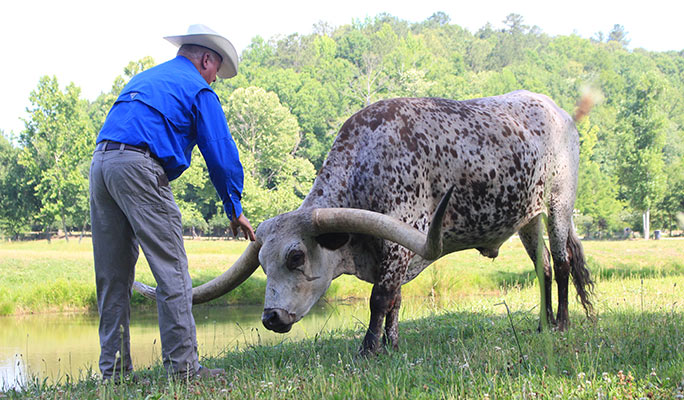 Guinness World Records' Claire Stephens, a Senior Records Manager in the USA who handled Poncho's application, had a vested interest in this particular record given its provenance: "Working at GWR, we see record applications come in from all over the world, so it was exciting to see a record holder come from my home state of Alabama!

"Even though we're used to seeing really amazing things, this really stood out as it's so striking and visual.

"It's always great to be the one to deliver the good news of achieving a record to someone, and the Pope family has been so helpful and enthusiastic in showing off Poncho Via'a record to the world. It's clear that Poncho and the Pope family really bring the local community together, and one of the best things about GWR is being able to celebrate things like this with the world." 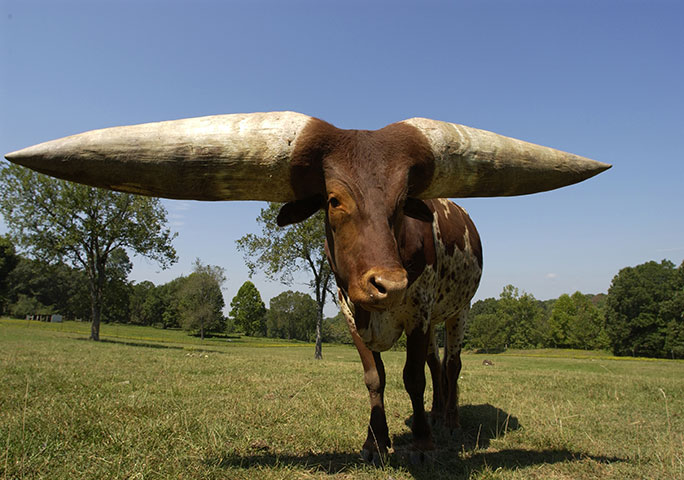 LURCH: A fellow steer in the GWR hall of fame is Lurch. The horns of this African watusi may not have stretched as far as Poncho’s but in terms of girth, they represented the largest horn circumference for a steer ever. At their thickest point, Lurch’s horns measured 95.25 cm (3 ft 1.5 in) round! 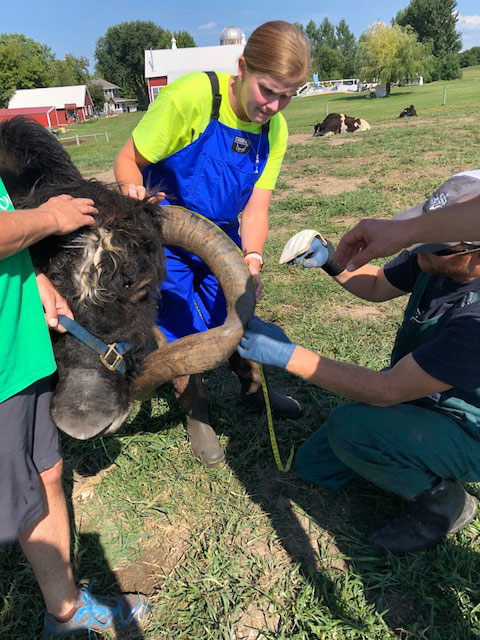 JERICHO: Out-measuring those of even Poncho (though admittedly more curly), the longest horns on a yak belong to Jericho, owned by Hugh and Melodee Smith of Welch, Minnesota, USA. As of 23 Dec 2018, his horns measured a combined length of 346.4 cm (11 ft 4.3 in). 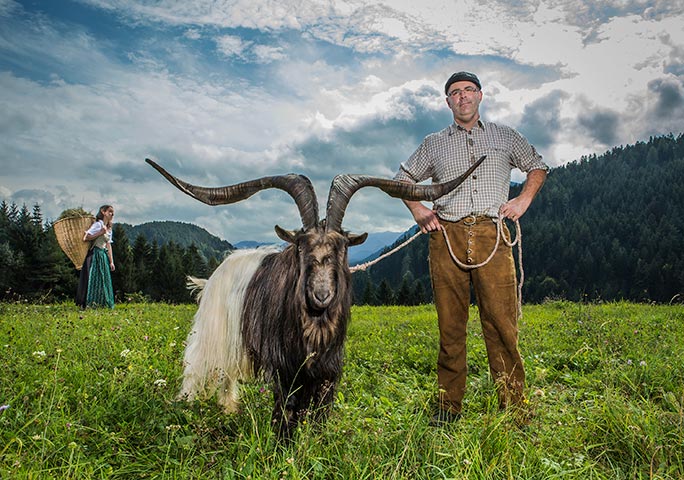 RASPUTIN: Not wanting American cattle to steal all the limelight, GWR took a trip to Zlan, Austria, in Feb 2018. There, we met Martin Pirker and his Valais blackneck, Rasputin, whose 140-cm-spanning (4-ft 7.1-in) rack has been authenticated as the largest horn spread on a goat. 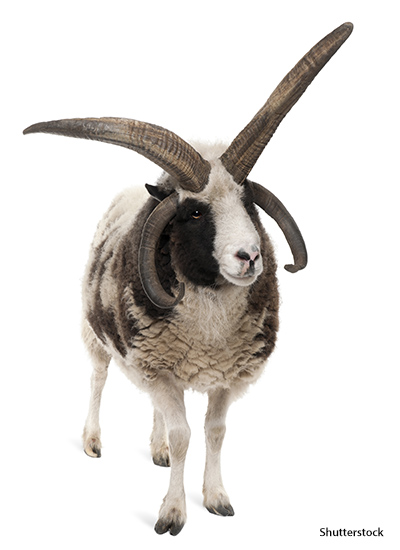 JACOB SHEEP: When it comes to the number of horns, ovine tops bovine. Jacob sheep have up to six horns – the most horns on an animal – though even the more usual set of four (example above) is still impressive.

Incredibly, in the Late Cretaceous, a relative of Triceratops known as Kosmoceratops richardsoni had as many as 15 horns! These were distributed around its head, including the nose, brows and neck frill, and easily amount to the most horns on an animal ever.