On the weekend of 11–12 May, a team from Guinness World Records (GWR) attended the first DogFest event of 2019. The festival that celebrates all things canine – now in its sixth year – was held in the grounds of Knebworth House in Hertfordshire.

"We were there to sniff out new talent with our inaugural RECORD BARKERS show," said GWR's Animals Editor, Adam Millward, "and the attendees certainly did not disappoint!"

Over the course of the weekend, hundreds tried their luck at a record and, by the end, no less than five titles had been claimed by talented pooches and their owners: 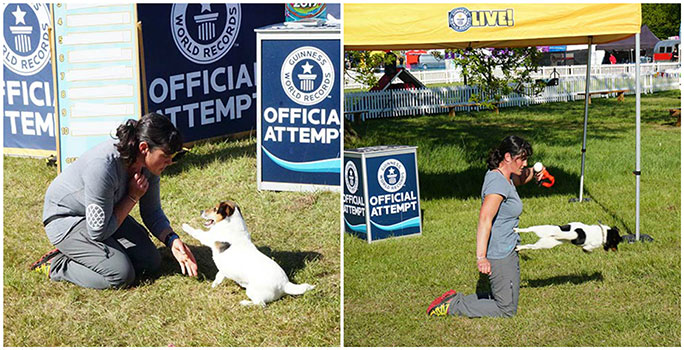 Trainer Rachael Grylls, who picked up a hat-trick of records with two of her dogs over the weekend, was delighted with her pets' performance.

"The weekend has been absolutely fantastic – the crowds have been amazing. Doing the challenge at DogFest outside with lots of people watching was awesome – a bit of pressure, but I’ve thoroughly enjoyed it!" 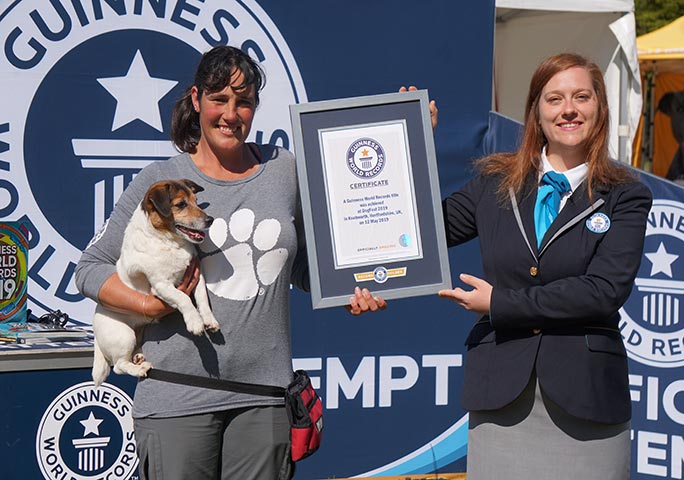 These three latest titles take Rachael's record tally to seven – achieved with three of her Jack Russells: Jessica, Jacob and Little Joe. She added: "I have four Jack Russell terriers in total, so now three of my terriers have world records, I think the other one’s feeling a little left out! We’re going to have to try… a world record attempt with Jack soon…" 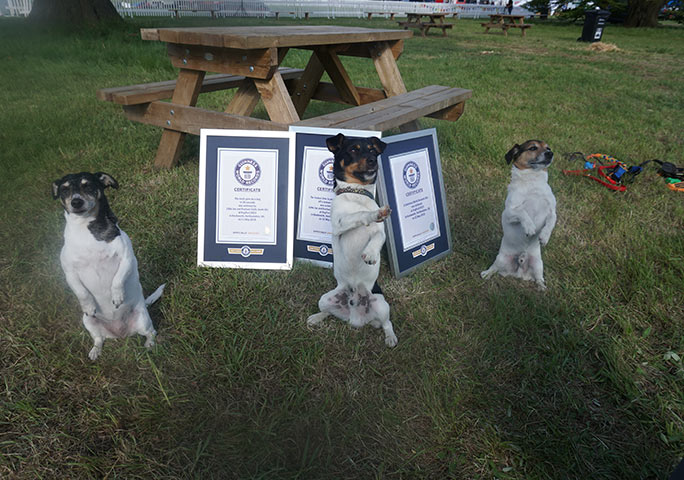 You can find out more about Rachael’s previous records in the profile video below.

DogFest Knebworth also saw Lynne Land secure her second record, having already achieved the most spins by a dog on the hind legs in 30 seconds (17) with her poodle Mojo in 2017. Multi-talented Mojo’s skills aren't limited to dancing either: she can play her own mini piano and has even penned her own book… with a little translation help from Lynne…

The fastest 30-m recall was proof that record-breaking genes must run in the family as Freddie is Mojo's son. After the record time had been verified, Lynne told us: "I was a little bit nervous as we were in a different place from where we’d been training… but he seemed fine, thank goodness! We’d probably like to shave a few seconds off if we can though…" 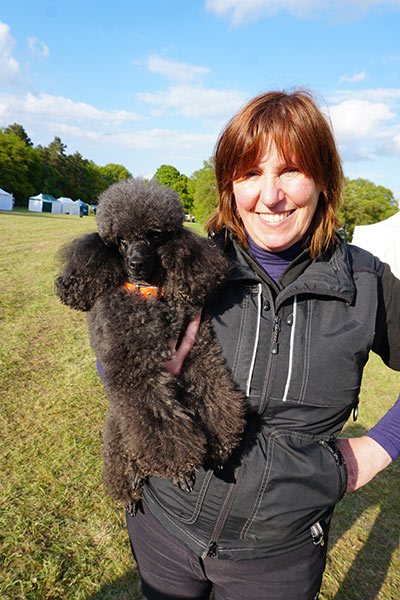 And her advice for owners who think they might have a "record barker" in the making? "The most important thing is to build a really good bond with your dog. Keep it really fit and healthy so that it can stay the distance. But also don’t overdo the training, otherwise you’ll make the dog bored."

If you want to get your hound in the record books, first check out the competition on our online showcase dedicated to dogs. You can then make an application for an existing title, or a brand-new idea, here. 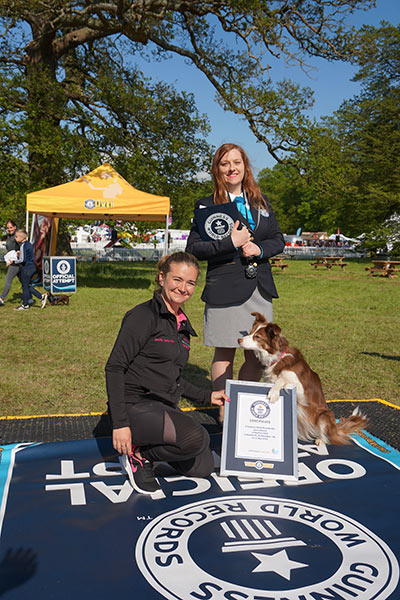 Official GWR adjudicator Sheila Mella, who was presiding over the record attempts at DogFest Knebworth, was blown away by the skills on display. "Breaking five GWR record titles within two days is no small feat!" she said.

"Even though not every person that came to RECORD BARKERS managed to get on top of the leaderboard, the passion of the trainers and the obedience of the dogs never ceased to amaze me.

"All the participants demonstrated a very strong bond with their pets and seemed to be having a great time while trying to break a record. From the dogs’ point of view, that may have had something to do with all the extra treats they were getting!" 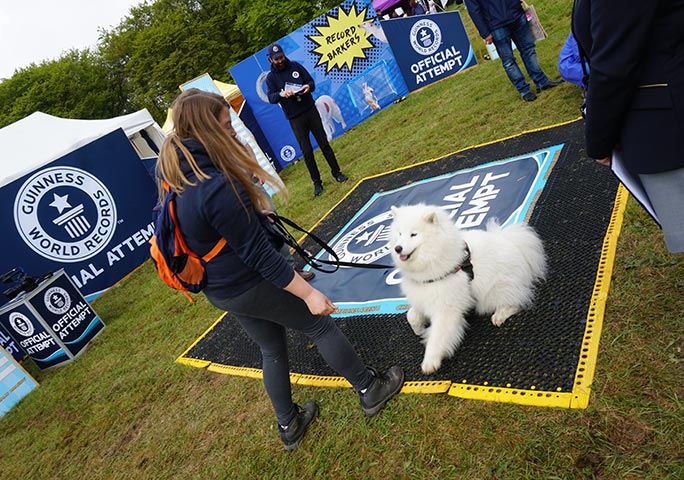 "I'm looking forward to seeing these amazing dogs again, as I’m sure they have more records in them and I encourage anyone else who thinks their pooch could set a record to get in touch."

In addition to seeking new "record barkers", DogFest was also an opportunity to catch up with a few existing record holding hounds and show off their superlative skills to visitors. The aptly named gentle giant Hagrid, owned by David and Sarah Woodthorpe-Evans (both UK), was one such star to put in a guest appearance. 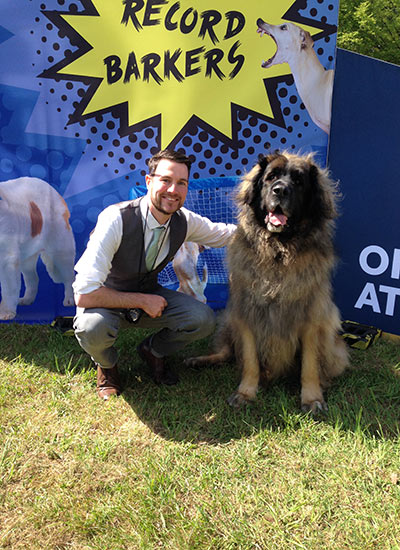 This laidback Leonberger has a knack for catching sausages mid-air, which has earned him numerous record titles, including fastest time to catch 10 items by a dog (14.76 sec) and most consecutive items caught by a dog (9). His aptitude for snaffling tidbits on the fly has led to TV appearances on Britain’s Got Talent, Blue Peter and CBBC's Officially Amazing.

Despite the reliably unreliable spring weather on the Saturday, the British public demonstrated their dogged resolve and turned out to DogFest in their droves. Beyond RECORD BARKERS, the event featured dock jumping, flyball, hay bale jumping and edge-of-your-seat agility displays – some even with burning obstacles!

There were also talks and book signings by special guests Professor Noel FitzPatrick (aka "Supervet") and Clare Balding. 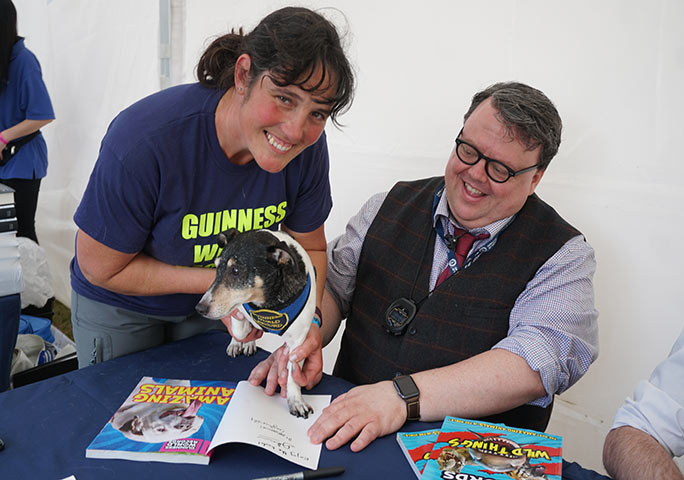 For those that weren't able to make it to Knebworth, there are two more DogFest events planned for 2019: one at Tatton Park in Cheshire (15–16 June) and the other at Ashton Court in Bristol (22–23 June). Full details about both shows can be found here, but please be aware that RECORD BARKERS will not be present at either of these two upcoming events.