The ordinary dogs with extraordinary body features – could YOUR pooch be next?

Record holders come in all shapes and sizes, and with all manner of incredible talents – and it's no different among canines. It’s little wonder given the fact that the domesticated wolf, aka Canis lupus familiaris (the scientific name for "dogs"), is the most diverse mammal, with some 800 varieties acknowledged worldwide.

Some hounds take years to master their record-setting abilities, whether it’s shaking paws, skipping, catching treats or blitzing agility courses – or more extreme pursuits such as skateboarding, surfing and even skydiving!

However, there are other super-dogs that are born with their records. From big ears to long tongues, here we spotlight the pets that were predestined to make it into the record books, because it was written in their genes…

Some of these titles don't have a current record holder, so keep reading to find out what to do if you think your pet could be a future record holder.

Find out about more record-breaking animals in our records showcase, including a page all about dogs

Bloodhound Tigger boasted the longest ears on a dog ever. When measured in 2004, his lugs were 34.9 cm (13.7 in) and 34.2 cm (13.5 in) for the right and left ears, respectively. Owned by Bryan and Christina Flessner from Illinois, USA, Tigger held the record until he passed away in 2009.

While Tigger may no longer be around, he made a big impression during his life. In addition to his otic Guinness World Records (GWR) title, which stands to this day, Tigger achieved more than 180 Best of Breed awards and was also inducted into the Bloodhound Hall of Fame. 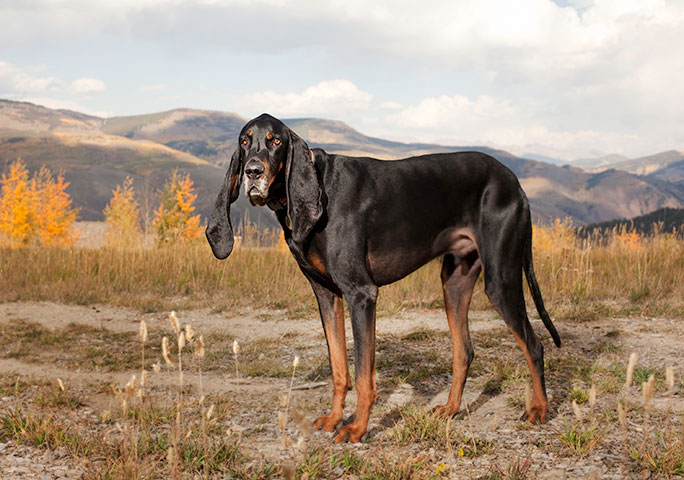 When it comes to extra-large ears, Tigger and Harbor both had a distinct biological advantage over many other pooches. That’s because this trait has long been a distinct characteristic of bloodhounds, coonhounds and Basset hounds.

These breeds are perhaps better known for another of their sensory organs: their noses. Bloodhounds have some 300 million scent receptors, compared to around 5 million in the human nose. Given their super-sniffers, it’s no surprise that "scent hounds" have traditionally been used by hunters, as well as by the emergency services for operations such as search and rescue.

While most of us would associate ears with hearing, those of scent hounds actually serve to enhance their odour-detecting abilities.

When holding their heads low in search of any interesting smells, their dangling lugs brush against the ground like brooms. This action stirs up any scent particles on the surface, which are then wafted towards their nostrils. Indeed, a bloodhound’s unrivalled nose-ears combo enables them to follow trails that were made several days previously – as much as 12 days before!

Tails of the unexpected 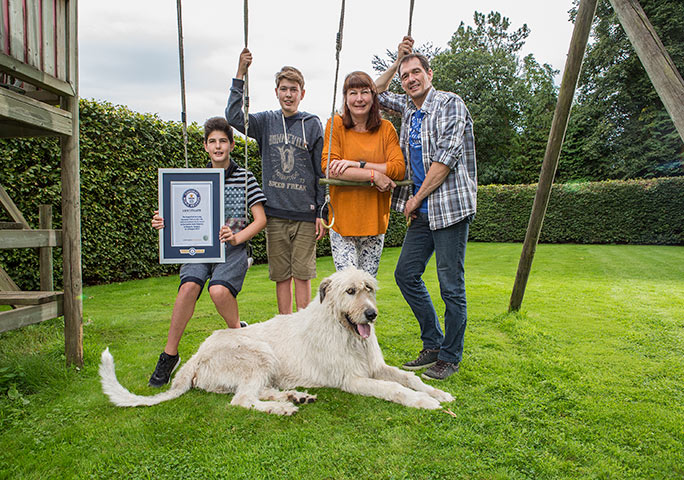 If a waggy tail is a sure-fire indicator of a happy dog, then there can be no mistaking when Keon is in a good mood! This Irish wolfhound is the owner of the longest tail on a dog, measuring in at 76.8 cm (30.2 in) – the equivalent of five iPhone X handsets laid out in a row. He lives in Westerlo, Belgium, with the Loodts family.

The battle for the biggest tail is a tight contest, with Keon taking the title off another Irish wolfhound in 2015. Keon’s wagger was just a little longer than that of Finnegan, from Calgary, Alberta, Canada. The difference was around 4.5 cm (1.7 in) – which for context is about the same as a LEGO Minifigure. 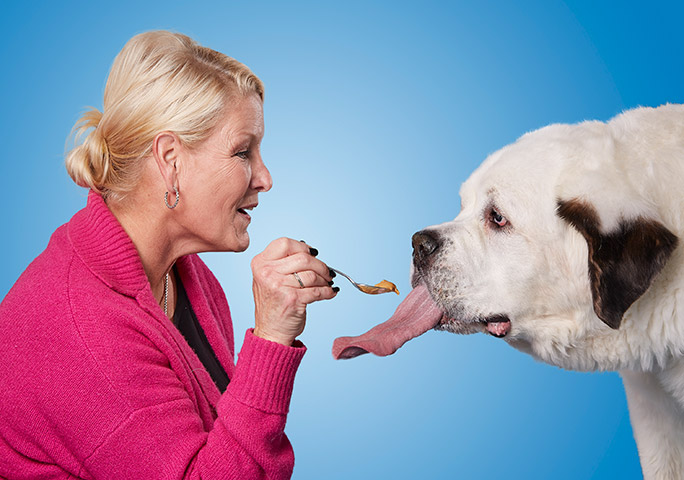 Owner Carla Rickert (USA), who adopted Mochi from an animal shelter when she was two years old, told us: "Mo is resilient, comical, loving and eternally grateful and loyal to us – her forever family. This once abused and neglected pup has taught us that it's okay to be different." 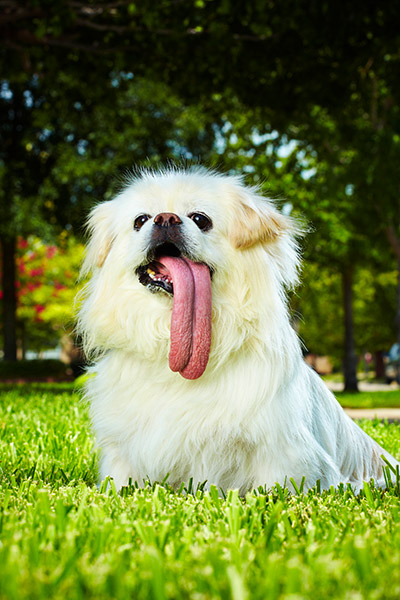 Carla continued: "We are proud of her unique feature… Mochi is so humble. She never brags or boasts but I know that she is as proud of her new record as we are." 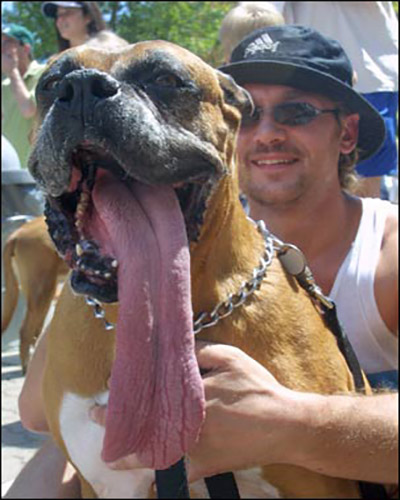 The all-time record holder is on a whole other level, though. In 2002, the tongue of Brandy the boxer from Michigan, USA, measured in at a mind-boggling 43 cm (17 in). The longest tongue on a dog ever is more than four times the size of the current longest human tongue, held by Nick Stoeberl (USA). 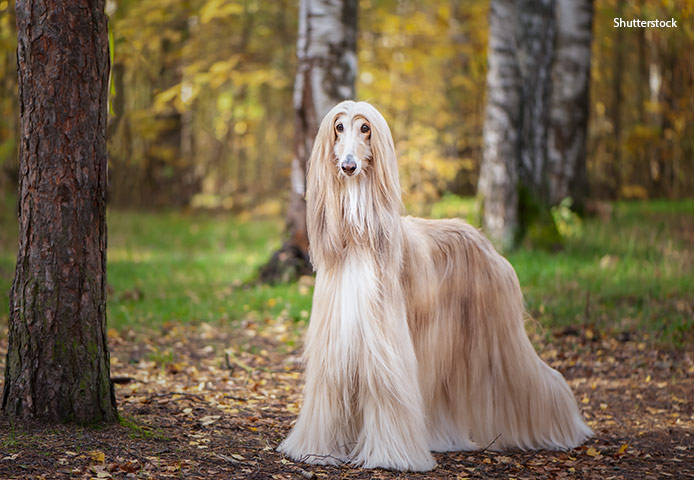 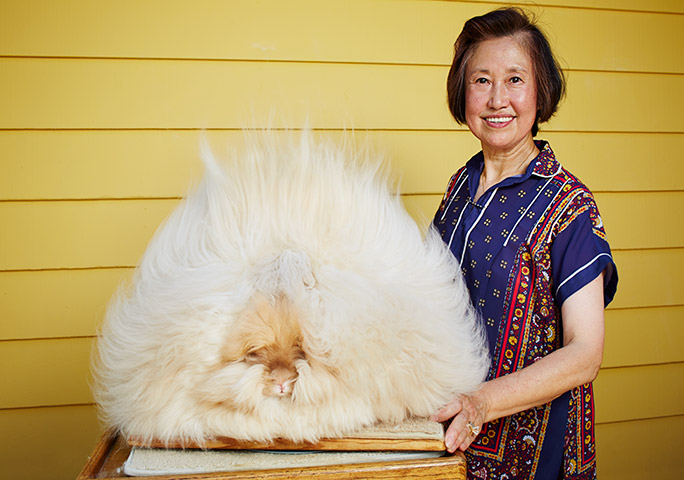 Afghan hounds (example above) are a prime contender for the title of longest fur on a dog, but other long-coated breeds such as bearded collies and bergamasco sheepdogs are also in with a shout, among others. Determining the overall fur length is based on calculating the average length from 10 individual hairs measured by a vet – you can access the full list of guidelines on our website.

Think your pooch has a tail that could out-wag all others? Or a longer-than-average pair of ears? If you're convinced that your dog is worthy of a place in the record books, then make an application and tell us all about them.

Records currently without title holders include:

Guinness World Records will also be attending DogFest at Knebworth House in Hertfordshire on 11–12 May 2019. Our "RECORD BARKERS" stand is the perfect opportunity to speak to our animal experts directly about how to go about taking on a record.