The talented dogs with superlative skills: could YOUR pooch's top trick be worthy of a record?

On 11–12 May, dog-lovers from across the UK will converge on Knebworth House in Hertfordshire for a celebration of all things canine. The special guests will include TV presenter Clare Balding and Professor Noel Fitzpatrick, aka SuperVet.

DogFest gives attendees the chance to let their pets try hay-bale racing, enjoy a canine workout on an agility course and even cool off in the special dogs-only "Fido's Lido". You'd be barking not to come along… 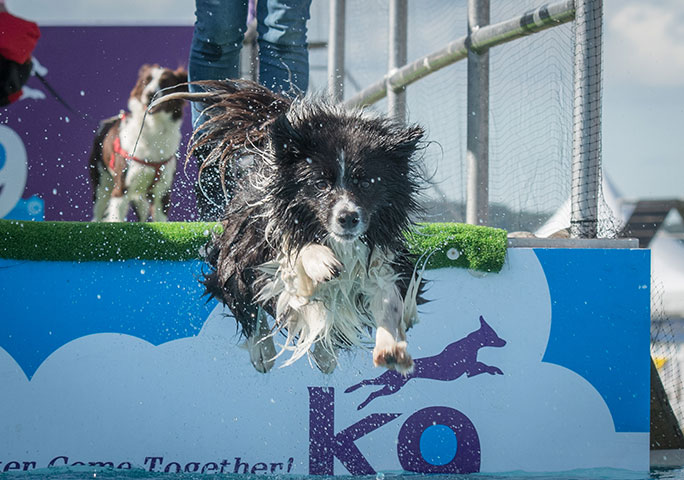 Get a flavour of what's in store in the highlights video of 2018's DogFest events below:

If you're attending DogFest at Knebworth next month, be sure to call by GWR’s "RECORD BARKERS" stand. During the weekend, you and your pooch will have the chance to put yourselves up for five official record titles (see end of article for more details):

• Most “sits” by a dog in one minute (Saturday AND Sunday)

• Most items caught by a dog in 30 seconds (ONLY Sunday)

A team from GWR’s headquarters, including Editor-in-Chief Craig Glenday and Animals Editor Adam Millward, will also be on hand to advise you on how you and your dog can attempt an official world record.

If you need further encouragement, be inspired by our selection of accomplished trick-performing canines who are already Officially Amazing. When it comes to breaking records, these pooches really take the biscuit…

Would you say your dog is well-balanced? Makoto Kumagai’s (JPN) pooch Purin certainly is. This beagle from Japan first achieved the fastest 10 m travelled on a ball by a dog in 2015, clocking 11.90 sec. She has since bettered her time twice, most recently on 7 April 2017, surpassing the 10-sec mark with a new PB of 9.45 sec. 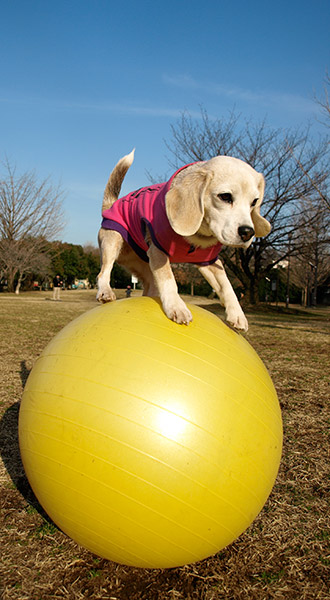 Purin’s ball skills don’t stop there. On 22 March 2015, the beagle took on goalkeeper duty, catching 14 balls before they could hit the back of the net. This still stands as the most balls caught by a dog with the paws in one minute – but perhaps your hound could channel their inner De Gea or Čech and catch more? 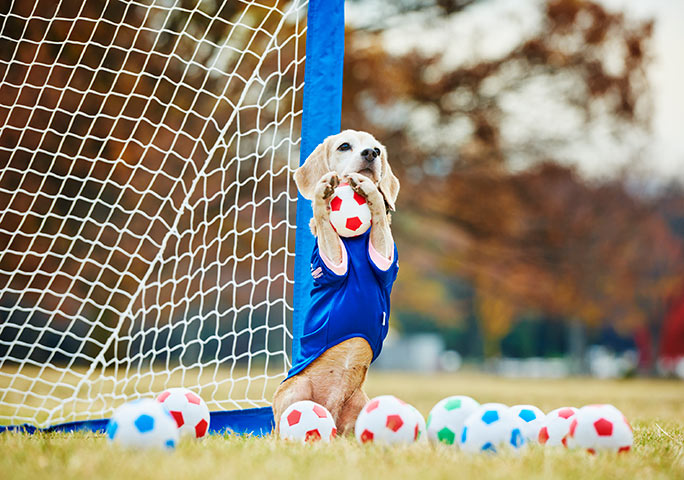 Back to balancing acts, the level-headed Australian shepherd-border collie Sweet Pea – owned by Alex Rothacker (USA) – achieved the fastest 100 m with a can balanced on the head by a dog – 2 min 55 sec – on 3 September 2008. This world record still stands today, more than 10 years after it was achieved.

A golden retriever named Augie holds the official record for the most tennis balls held in the mouth by a dog – five. Augie really aced it that day – his record has stood since 6 July 2003. 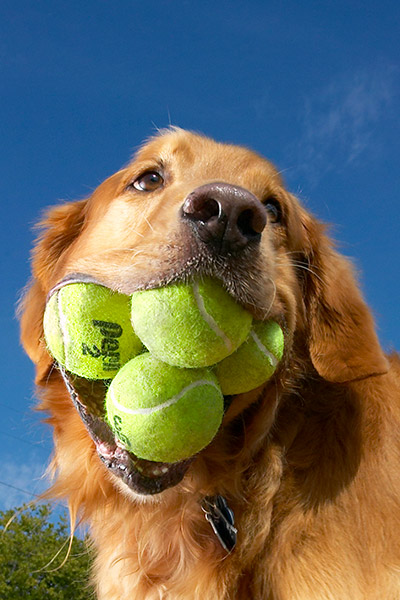 On 14 September 2017, a female greyhound named Feather literally leapt at the chance of achieving a Guinness World Records (GWR) title. She performed the highest jump by a dog – 191.7 cm (6 ft 3.5 in); that would be enough to take her clean over the shoulders of a rhinoceros!

Another acrobatic canine, Geronimo, executed the most double-dutch-style skips by a dog in one minute on 7 April 2014. The female border collie-kelpie cross completed 128 skips with her owner, Samantha Valle (USA).

Four legs good… four wheels better? On 16 September 2013, a border collie named Jumpy performed the fastest 100 m on a skateboard by a dog – 19.65 sec – on the set of Officially Amazing in Los Angeles, California, USA.

On 17 September 2017, Dai-chan the bulldog negotiated 33 pairs of legs on his way to recording the longest human tunnel skateboarded through by a dog in Chiyoda, Tokyo, Japan. This bettered the previous record of 30 people, whose legs Otto the bulldog rolled through in 2015. 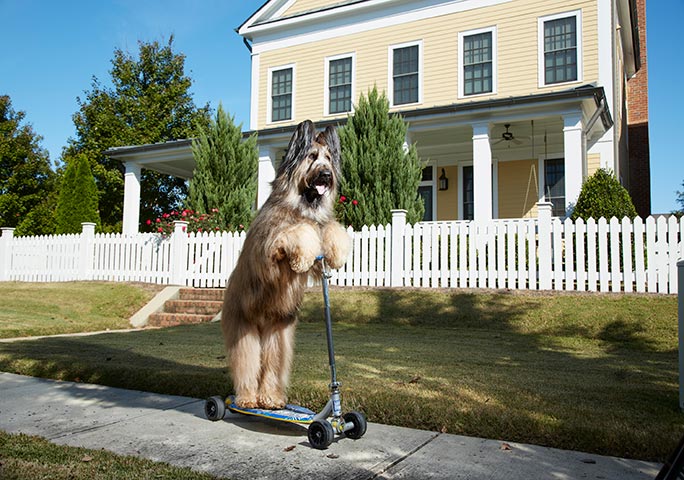 The following year, Norman proved his dexterity on two wheels too by completing the fastest 30 m on a bicycle by a dog – 55.41 seconds – in Los Angeles, California, USA. And this Briard with a need for speed has plenty of other doggie tricks up his sleeve too… 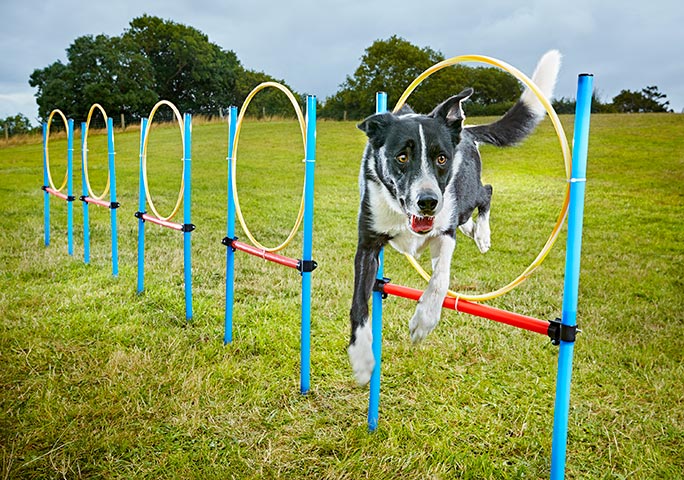 In a demanding test of agility and coordination, dogs must jump through each of five hoops arranged in a line, then turn and repeat the feat for the return journey. Like this…

Some dogs are so keen to learn new stunts that it seems they just don’t know when to stop! The most tricks performed by a dog in one minute is 49, by border collie Hero and owner Sara Carson (Canada) in Palmdale, California, USA, on 18 February 2018. Among other challenges, the multi-talented collie leaped through a tyre, negotiated a low tunnel, rolled over, balanced on Sarah’s heels and caught a Frisbee in mid-air.

Dog catchers sometimes get a bad press, but dogs who catch are another thing entirely. Take Hagrid, for example. This loveable Leonberger has a real appetite for snaffling mini sausages (and setting records in the process). 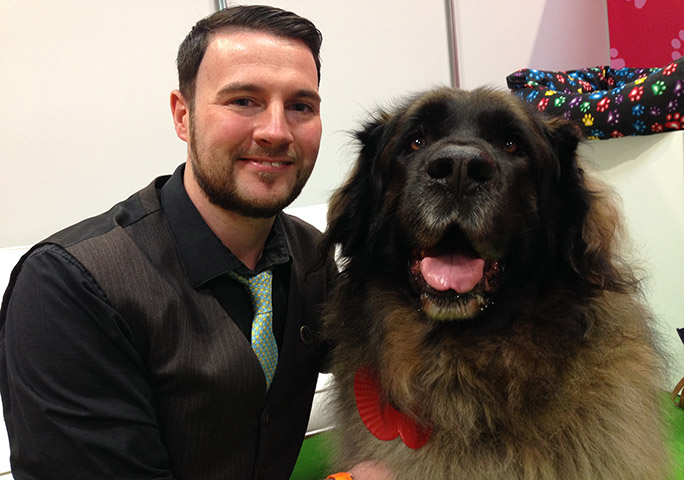 Think your pooch has unparalleled paw-eye coordination? Or can out-skip, out-skateboard or out-cycle the rest of the pack? If you're convinced that your dog is worthy of a place in the record books, then why not make an application?

Guinness World Records will be attending DogFest at Knebworth House in Hertfordshire on 11–12 May 2019. Our "RECORD BARKERS" stand is the perfect opportunity to speak to GWR animal experts directly about how to go about taking on a record.

*All current GWR dog trick records are for animals aged one year or older. If looking to take on a GWR title at DogFest, please bring along documentation that includes your dog's date of birth. Alternatively, evidence can be supplied at a later date, however the record will not be officially confirmed until this has been received and approved by GWR.

Find out about more record-breaking animals in our records showcase, which includes a page all about dogs