Fantastic beasts and the people that find them: 10 amazing animal records set in 2018

2018 has been a bumper year for record-breaking animals, as well as some of the most popular naturalists and conservationists whose lives revolve around wildlife.

Here, we celebrate 10 of the wildest highlights from the last 12 months... 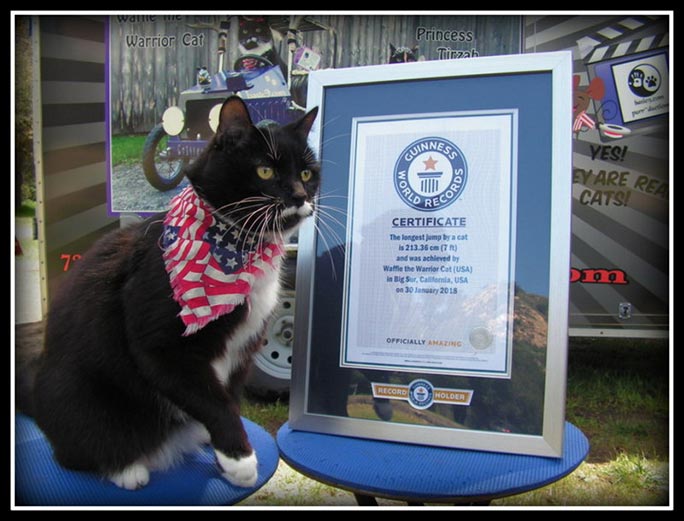 Kicking off the year, 10-year-old Waffle the Warrior Cat from California, USA, proved he still had plenty of spring in his step on 30 January…

He comfortably cleared a gap of 2.13 m (7 ft) between two platforms – setting the record for Longest jump by a domestic cat. This out-leapt the previous record holder, Alley, by just over 30 cm (1 ft).

It's some way off the record for the Longest jump by a wild cat, though... A snow leopard has been recorded clearing a ditch that spanned 11.7 m (38 ft) – that's longer than a school bus! This isn’t the first record that Rachael, a professional animal trainer, has set with her pets. She previously achieved the one-minute title for Most skips on a single rope by a human and dog with another of her Jack Russells, Jessica (below). The duo bounced their way into the record books with 59 skips in 60 seconds in late 2016. 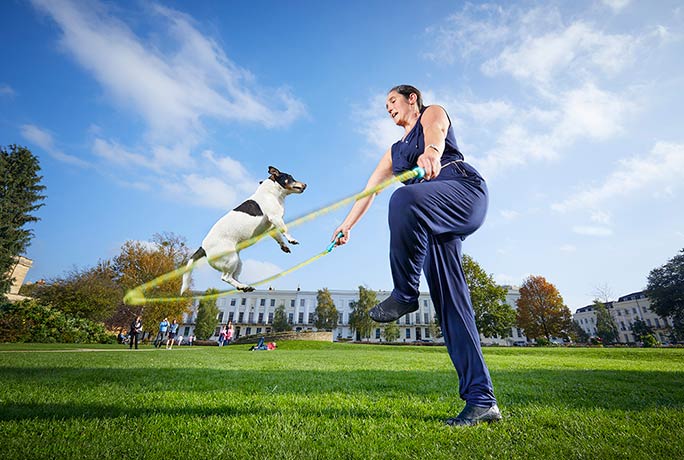 Hot on the heels of Jacob was another heroic hound. Hero by name, hero by nature, this multi-talented pooch completed a staggering 49 different tricks on 18 February – the Most tricks by a dog in one minute.

The repertoire included classics such as sitting and rolling over to more involved manoeuvres such as doing a "pawstand", riding a skateboard and taking a (well-deserved) bow.

If the Super Collie and his owner, Sara Carson (Canada), look familiar, it may be because you’ve seen them on TV: the pair came fifth in the 12th season of America’s Got Talent in 2017 (see video below). 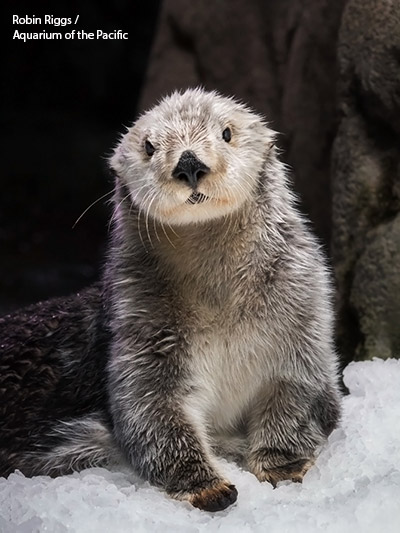 On 2 March, Charlie the sea otter from Aquarium of the Pacific in California, USA, celebrated his 21st birthday – making him the Oldest living sea otter in captivity. He was found stranded as a cub in 1997 and was taken in by a team at the aquarium who have cared for him since. He saw in his big day with a special birthday cake made of his favourite food: ground-up clams. Yum…

The Oldest sea otter in captivity ever was Etika from Seattle Aquarium in Washington, USA; she was approximately 28 when she passed away in 1997. If there were a record for "Most selfless insects", the Colobopsis carpenter ants of south-east Asia would have to be prime contenders.

A study published in ZooKeys in April shone the spotlight on a new model species, Colobopsis explodens – their Latin name being a clue to their heroic act. If their nest comes under attack, these ants have developed a rather unusual form of defence: they can rupture their own bodies, spraying the enemy in a super-sticky, irritating substance that stops the invader in their tracks. This makes them the First known "exploding" ants – see their self-sacrifice in action in the video below.

Plus for more record-breaking bug action, be sure to check out GWR's special augmented-reality creepy-crawlies! 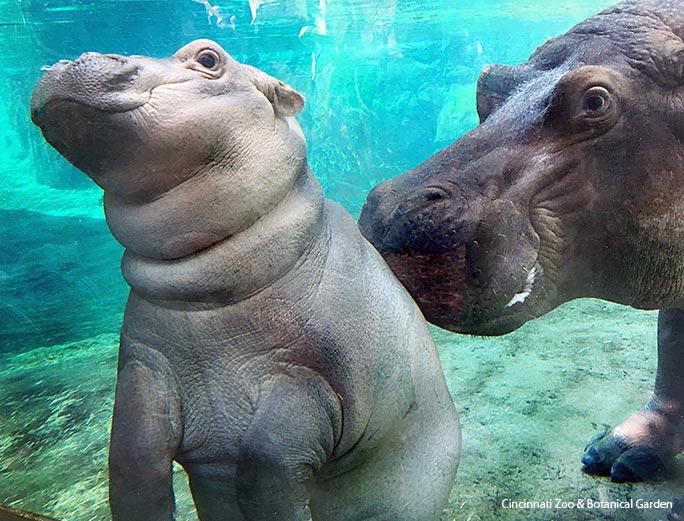 As of 26 April, Fiona the hippo from Cincinnati Zoo & Botanical Garden in Ohio, USA, had amassed 319,638 thumbs-up for her eponymous show, making her the Most liked hippo on Facebook. The unconventional social-media star was named after the Shrek character, apparently owing to their similar-looking ears.

She’s not the only zoo resident to have stolen the limelight online. As of the same date, April the Giraffe at Animal Adventure Park in New York, USA, boasted 41,083 fans on Twitter. The Most followed giraffe on Twitter first shot to fame in 2017 with the long-awaited arrival of her calf Tajiri.

She hit the headlines again in 2018 when it was announced she was pregnant once more. The new arrival is expected in April 2019, but given April's past history for keeping us waiting, all bets are off… 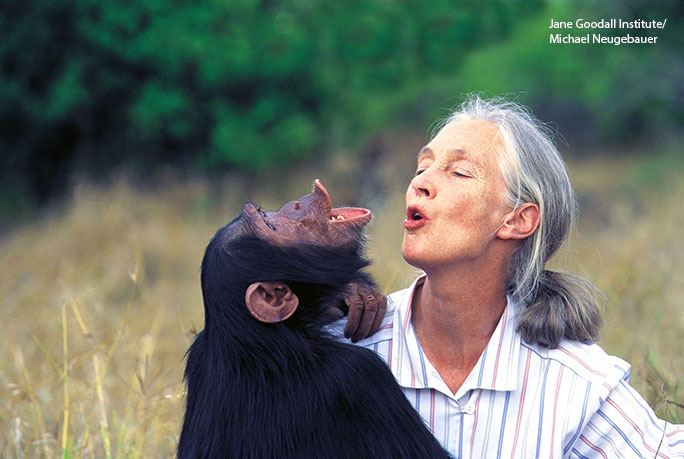 2018 didn’t just see records set by animals, but also the people who have dedicated their careers to them. Pursuing her childhood dream of studying creatures in the wild, primatologist Dr Jane Goodall (UK) arrived at Gombe Stream Reserve in Tanzania in 1960. With chimpanzees still observed there to this day, now by scientists working for the Jane Goodall Institute, this is the Longest-running wild primate study. It had been running for 58 years as of July 2018.

This year, Guinness World Records also awarded a record to two of Gombe’s resident chimps – find out what it was, and more about Dr Goodall’s incredible career, here. Sometimes even records that seem unbeatable can be rewritten – as proven this year by the Largest bird ever.

On 26 September, Dr James Hansford and Dr Sam Turvey – two scientists at the ZSL Institute of Zoology in London, UK – published a paper that rocked the ornithology world. It had long been recognized that, based on overall height and weight, the extinct elephant birds of Madagascar (artist’s impression above) were the biggest birds ever to walk our planet, though they sadly died out around 1,000 years ago.

A new investigation of fossilized bones uncovered a whole new genus of elephant bird that had previously been overlooked. Named Vorombe titan, these giant ground-dwelling avians stood up to 3 m (9 ft 10 in) tall and could have weighed a staggering 860 kg (1,895 lb) – about the same as two horses! The Irwins are wildlife royalty, presiding over one of the world's most popular zoological parks (Australia Zoo) and regularly appearing on our TV screens since the 1990s. Despite the tragic death of Steve Irwin in 2006, the family are continuing his legacy, igniting people's passion for nature and leading the conservation charge with their charity, Wildlife Warriors.

Their reach now extends far beyond television too. Robert Irwin is an award-winning photographer, snapping some of the most endangered creatures on Earth to help raise their profile. His elder sister Bindi Irwin (Australia), meanwhile, is a prominent activist on social media. On 1 November, GWR recognized Bindi's huge following with the record title Most followers for a TV naturalist on Instagram, having amassed more than 1.9 million fans. At the time of writing this, she was close to surpassing the 2-million milestone.

Both Robert and Bindi have exclusive interviews in Guinness World Records: Wild Things; read a teaser from Bindi's Q&A here. 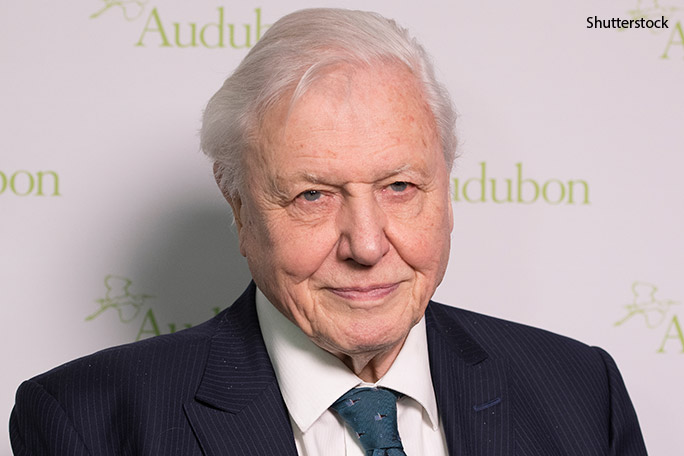 What better way to end a year of amazing animal records than with arguably the world’s most iconic living naturalist? With the airing of his latest series, Dynasties (BBC, UK) in November/December, Sir David Attenborough (UK) extended his own record for Longest career as a TV presenter to more than 65 years. It doesn’t end there, either, as he informed us he has more shows in the pipeline for 2019… (Keep an eye on Netflix, folks.)

Discover the record-breakers that starred in Dynasties – including Sir David – here.

If this has whetted your appetite for animal records, there are hundreds more in Guinness World Records: Wild Things – available in shops and on Amazon. Plus, we have many more amazing pets and wild wonders due to be revealed in 2020, so keep close tabs on the GWR website, which has some exciting developments underway if you're an animal fan... Watch this space! 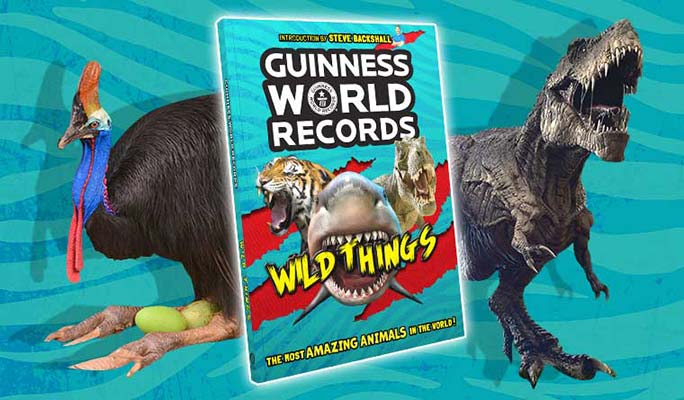