Eliud Kipchoge has collected more gold medals and records under his belt (or, perhaps, ‘under his shoes’ is more apt) than any other marathon runner in history.

Meet "The Philosopher", also known as the greatest marathon runner in history, who broke the 2-hour-barrier and changed the history of modern marathons. 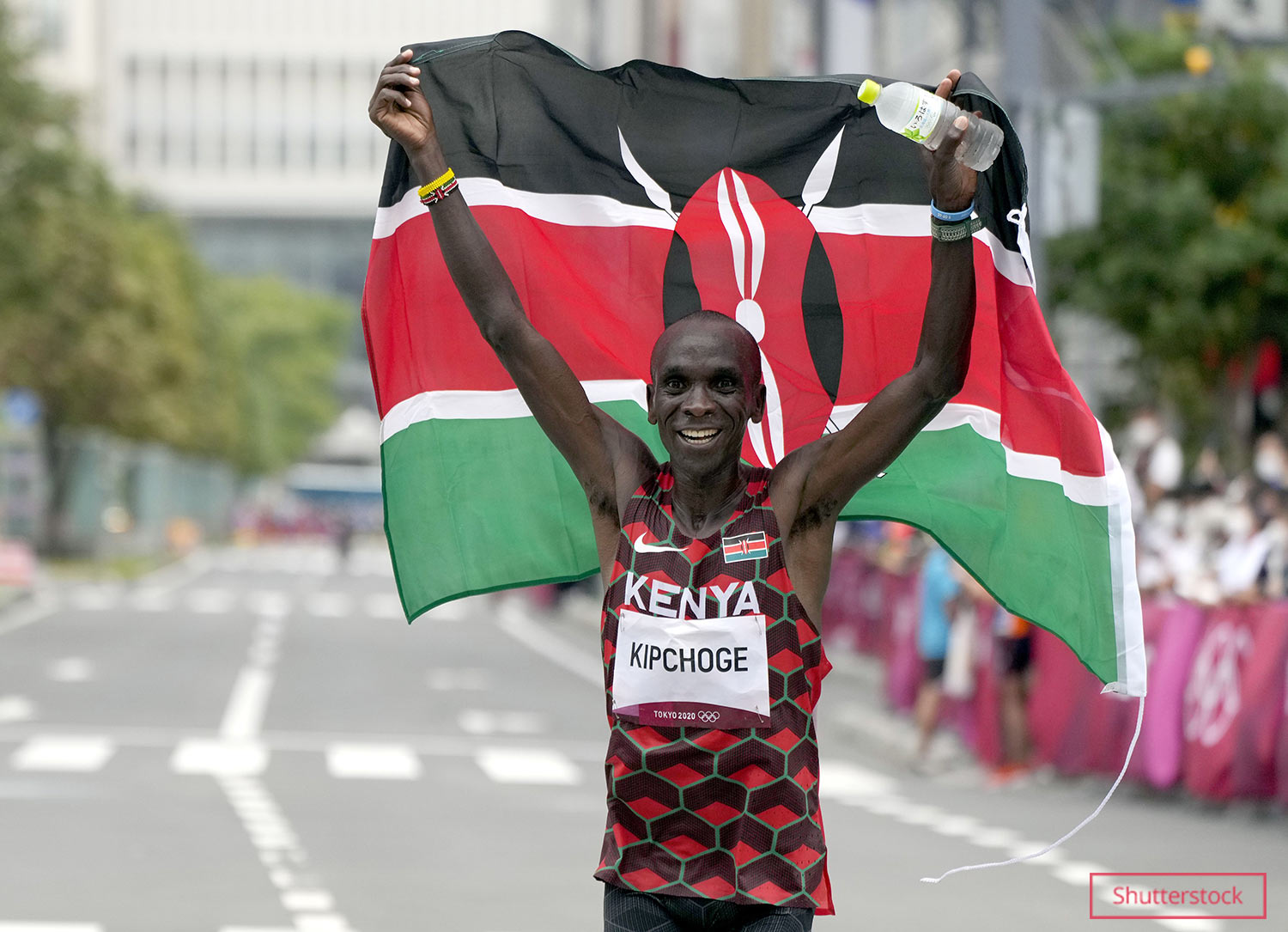 It was back in the 1st century CE when Plutarch, in his On the Glory of Athens, first recalled the story of Pheidippides.

According to the legend, the Greek soldier ran the distance between Marathon and Athens (about 25 miles), without stopping and discarding his clothes and weapons to sprint faster, to inform the capital that a Persian invasion had been defeated.

On arriving in Athens, after announcing “Nike!” (“Victory!”), the story goes that he promptly died.

After that historic day, Marathon ceased to be just a city.

These days, while still a gargantuan undertaking, marathons are thankfully a much less life-or-death predicament.

That said, they never cease to provide a great challenge and a breath-taking spectacle.

However, in 1908, for the London Olympics, the original track from Windsor to the Olympic Stadium in White City was changed twice: once because of the royal request to move the starting line to Windsor Castle, adding a mile to the track, and subsequently including an additional 385 yards to finish in front of the royal family’s viewing box inside the Olympic Stadium.

Although the changes continued in the following Games, testing new ways to challenge the athletes, in 1924 the 42 km track was declared by the IAAF as the official course of modern marathons.

Today, marathons are a pillar of international sports, epitomizing to many the pinnacle of both physical and mental endurance in the sporting world.

The discipline was introduced in the first modern edition of the Games – held in 1896 in Athens, Greece – thanks to the relentless advocacy of Michel Bréal.

The French psychologist and pioneer of semantics suggested the idea to his friend Pierre de Coubertin, founder of the modern Olympics. Today, every year, the act of running a marathon (and, perhaps even more crucially, preparing mind and body to withstand the effort) serves as a “bucket list” goal to thousands of people around the world.

Some do it for fun, some enjoy the sense of community, some make a flourishing career out of it. Others use the track to prove to themselves that “limit” is just a word.

But one athlete changed the game forever.

“No human is limited”

With his unprecedented streak of records and wins, the Kenyan athlete keeps raising the bar for marathons. With the astonishing total number of nine triumphs over the course of his career, the athlete holds Olympic titles, World Championships, awards and several records, among which we find the most wins of World Marathon Major races (male): nine.

But who is Eliud Kipchoge – the athlete, the man, the record-breaker? And why has he come to be known as “the Philosopher”?

Eliud Kipchoge started running when he was a child.

The eight-time World Marathon majors gold medallist, who is described today as the “best marathon runner of the modern era” was born in 1984 on a farm in Kapsisiywa, Kenya, as the youngest of four siblings. During his childhood, he ran to school, covering 2 mi (3.2 km) every day. According to the NN Running Team (of which Kipchoge is a member), Eliud also often cycled to the local market, hauling several gallons of milk that his family would sell.

When he was a teenager, Eliud took on professional running thanks to the encouragement of his neighbour and former Olympic athlete, Patrick Sang. Sang consequently became Eliud’s coach and lifelong friend, as well as his unfaltering support through both victories and losses.

However, this innate inclination for running is matched by an equally impressive mindset: Eliud is a “true believer”, a warrior fighting against himself and always ready to push his own limits. 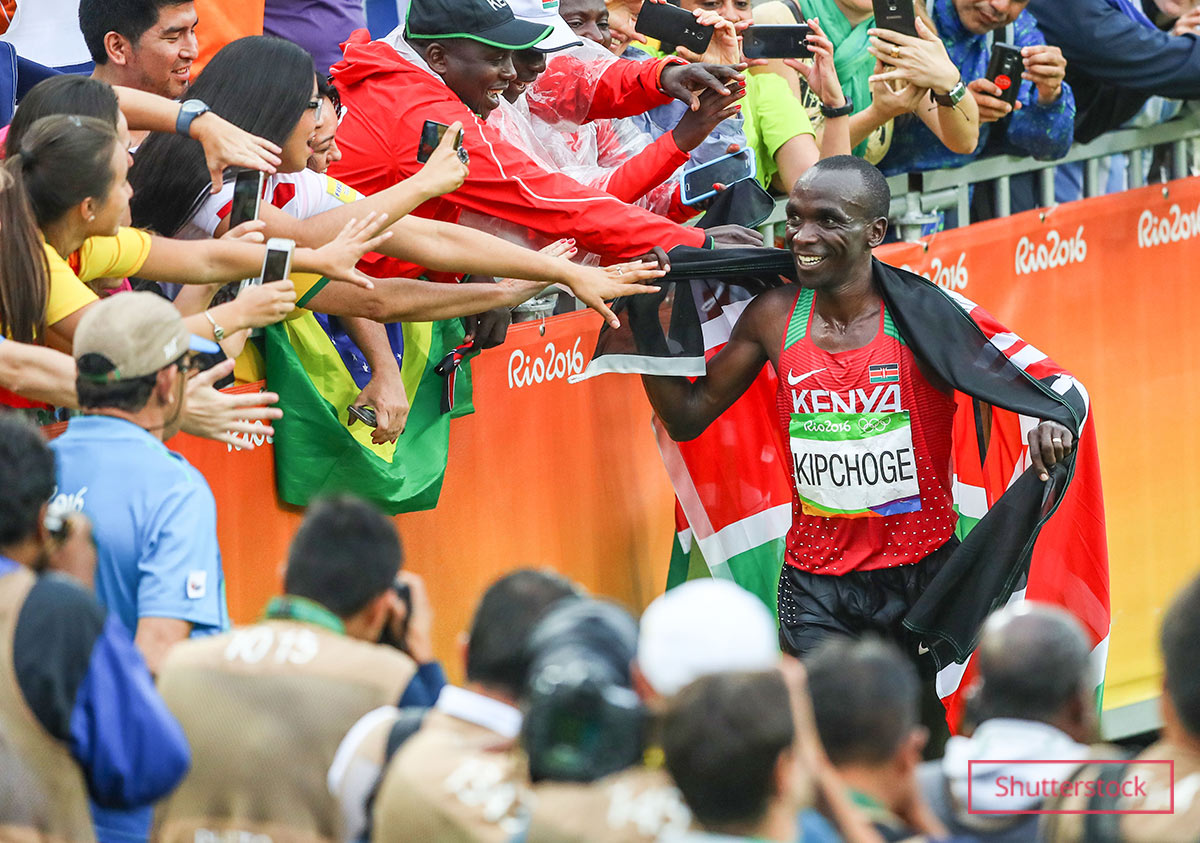 The Olympic reigning champion never set himself any limits, resulting in one success after another.

In 2003, at the French World Championship held in Paris, Eliud claimed his first senior track gold. On this occasion, he outpaced Moroccan sprinter Hicham El Guerrouj – who, among other records, has achieved the fastest run one mile (male), completing the distance in a mere 3 minutes 43.13 seconds.

In 2016, he raced against other 155 runners at the Rio Olympics – challenging and triumphing over what became the largest field for a marathon in Olympic history.

On that occasion, Eliud raised the gold medal on 21 Aug 2016 with a 2:08:44 result, confirming the voices who wanted him as a prerace favourite and therefore cementing his place in history.

What seemed like the coronation of a dream wasn’t but the starting point for the athlete, who remained set on challenging the boundaries of physical and mental endurance.

Only two years later, in 2018, Eliud conquered the Berlin Marathon in a record-breaking time of 2:01:39, shaving a sizeable 1 minute 18 seconds off the previous mark set by fellow Kenyan superstar Dennis Kimetto.

Another regular fixture in Kipchoge’s calendar is the London Marathon, which also secured him a spot in the annals.

The annual event encourages people to reunite and collaborate in a fun, charity-led environment, “providing some happiness and a sense of achievement in a troubled world."

In the ever-stunning frame of a London that comes alive with the event, one of the aims of the marathon is to encourage more people to take up sports. However, it also shines a spotlight on international elite runners who find in the London Marathon the perfect scene to prove their skills and push their limits.

It’s precisely this British event that will see Eliud secure more records for his (already crowded) list of achievements.

After winning the 2015, 2016 and 2018 editions, in 2019 he yet again snatched the gold medal at the British long-distance race. With the unprecedented time of 2 hr 2 mins 37 sec, he dominated the race and set the fastest run London Marathon.

With this fourth victory, he cantered home with a stunning, never-seen-before result, breaking the record for most London Marathon wins that he previously shared with three other pillars of marathon racing:

Although this string of successes came to an end during the special COVID-edition of the marathon in 2020, with Eliud placing eighth after experiencing an issue with his right ear, he seems ready to attempt a fifth win in the next edition of the world-famous event planned for Oct 2021. 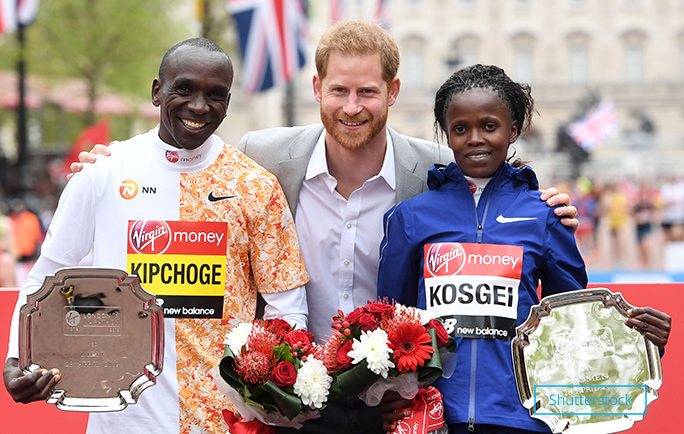 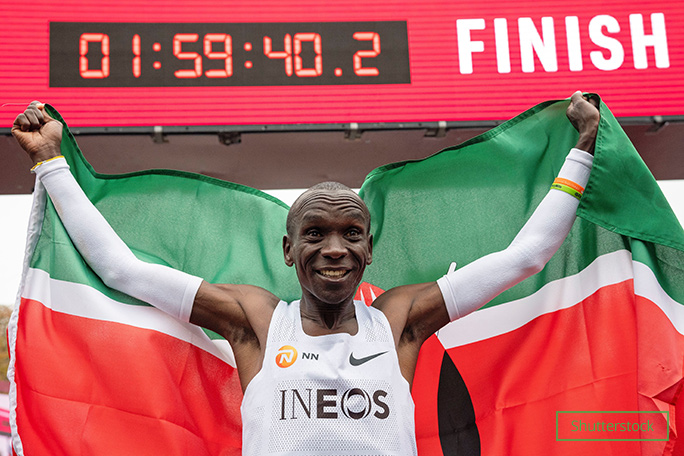 On 12 Oct 2019, Eliud and the INEOS 1:59 team attempted (and succeeded) in something that had been considered physically impossible: running a marathon in under two hours. It’s worth highlighting that this game-changing achievement was during the INEOS 1:59, a special marathon exhibition event that was set up to provide the optimum conditions.

Eliud broke the two-hour barrier at Prater Park in Vienna.

The Austrian capital had been chosen after extensive research thanks to its flat surface and proximity to sea level, and the date had been picked due to the favourable weather (a detail that would be crucial for the challenge’s success). An electric car set the pace, and Eliud wore a bespoke version of Nike’s high-tech Vaporfly trainers.

For the above reasons, this event was not recognized as an official marathon, where conditions are typically less beneficial, but it does nevertheless represent the fastest marathon distance run on record. But pinpointing the right day and location weren’t enough on their own to guarantee a sub-two-hour run.

Eliud already came close to the under-two-hour result in Monza, during Nike’s Breaking2 project, barely brushing the never-achieved-before time in 2017. 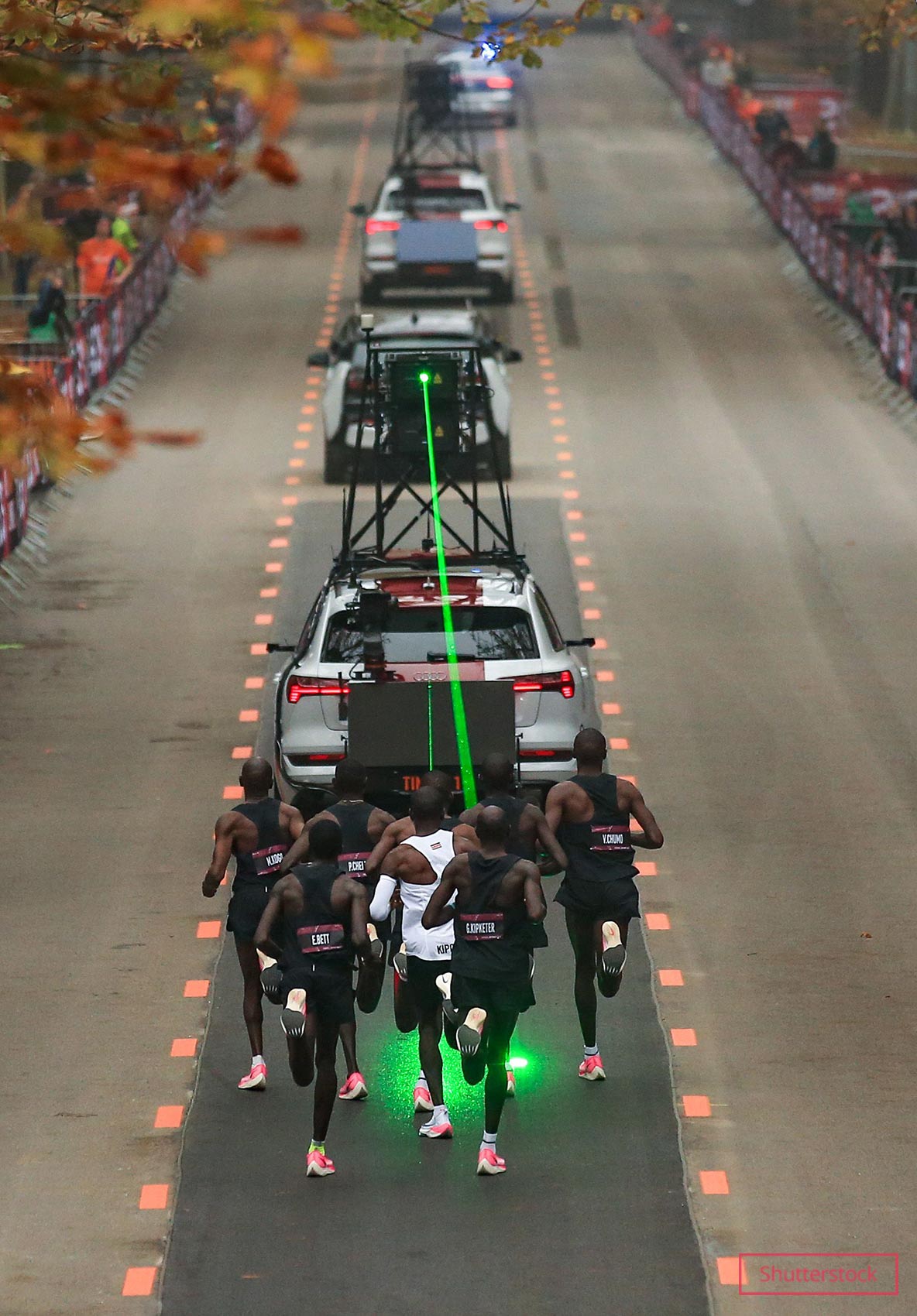 That made something click in his heart, proving that the impossible wasn’t quite as outlandish as people thought.

And believing proved to be the last secret ingredient in an already perfect recipe.

Prior to the attempt, the athlete underwent a stupefying mental and physical preparation under the close supervision of his team that, like him, fully believed in the challenge and his ability to rise to the occasion.

Thanks to perseverance and resistance that exceeded the limits of what was thought possible and to a strategy devised by CEO Sir Dave Brailsford and INEOS’ team of experts, Eliud finished the marathon in the boundary-shattering time of 1 hr 59 min 40.2 sec. 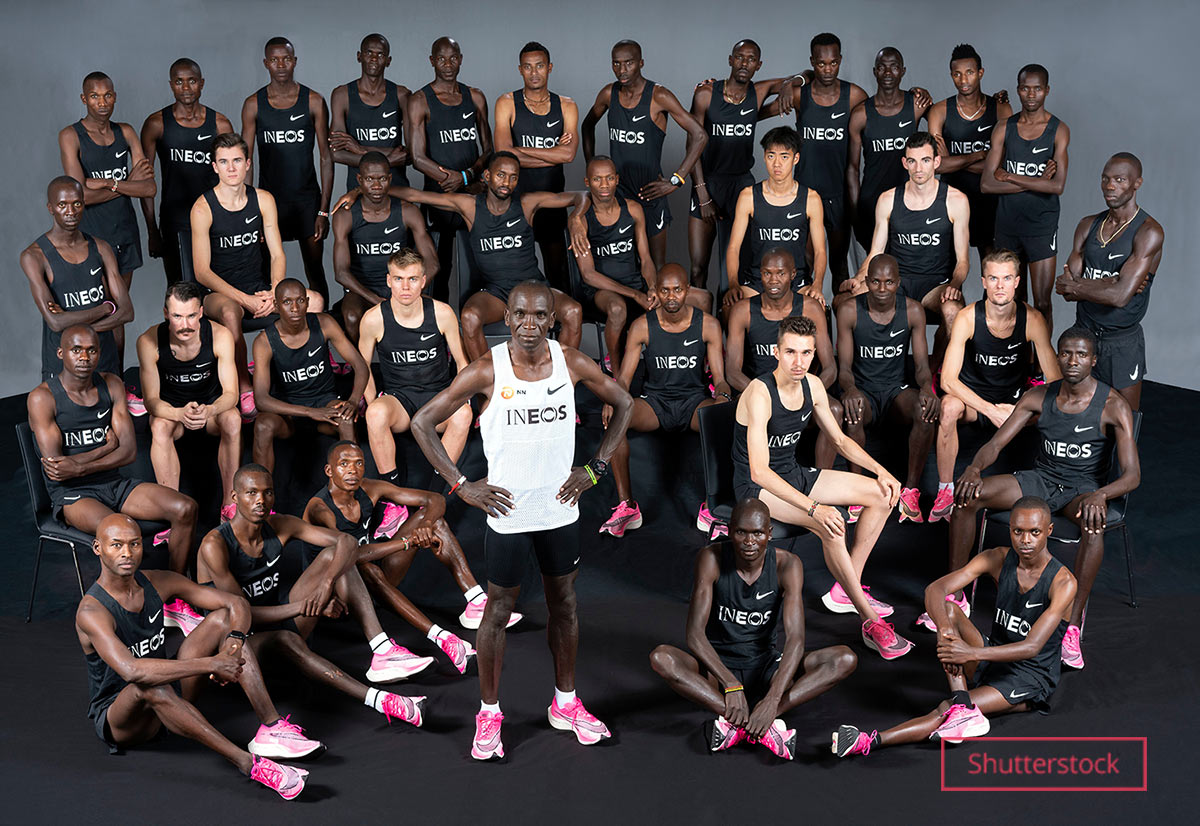 This achievement broke the last barrier of modern sports, but also proved Eliud’s theory: if you focus on your goals and challenge your limits, nothing is impossible.
The conquest was a part of the #NoHumanIsLimited campaign – which takes its name after Eliud’s inspirational words.
The record holder is not alone in this inspiring mission, flanked by personalities of the calibre of Olympic marathon runner Abdi Nageeye and World Cup winner Patrick Vieira.

The records, the present

A paragon in his field, Eliud has raced away with several Guinness World Records titles during his running career:

More recently, in Aug 2021, at the Tokyo Olympics 2020, Eliud added further sheen to an already illustrious career by dominating the track once more.

He defended his Olympic title by delivering an outstanding performance that put him on the Japanese podium with yet another gold medal.

After winning several recognitions and awards for his inspiring actions as well as athletic attainments (among which we can find his award as United Nations Kenya Person of the Year in 2018, and IAAF Male Athlete of the Year in 2018 and 2019), it is safe to say that Eliud Kipchoge is a true superstar.

His fame, his words and - most of all - his deeds have inspired endless people around the world to pursue their dreams, and never set themselves limits.

Meet Eliud Kipchoge in our Hall of Fame on page 245 inside the new Guinness World Records 2022, available in shops and on Amazon. 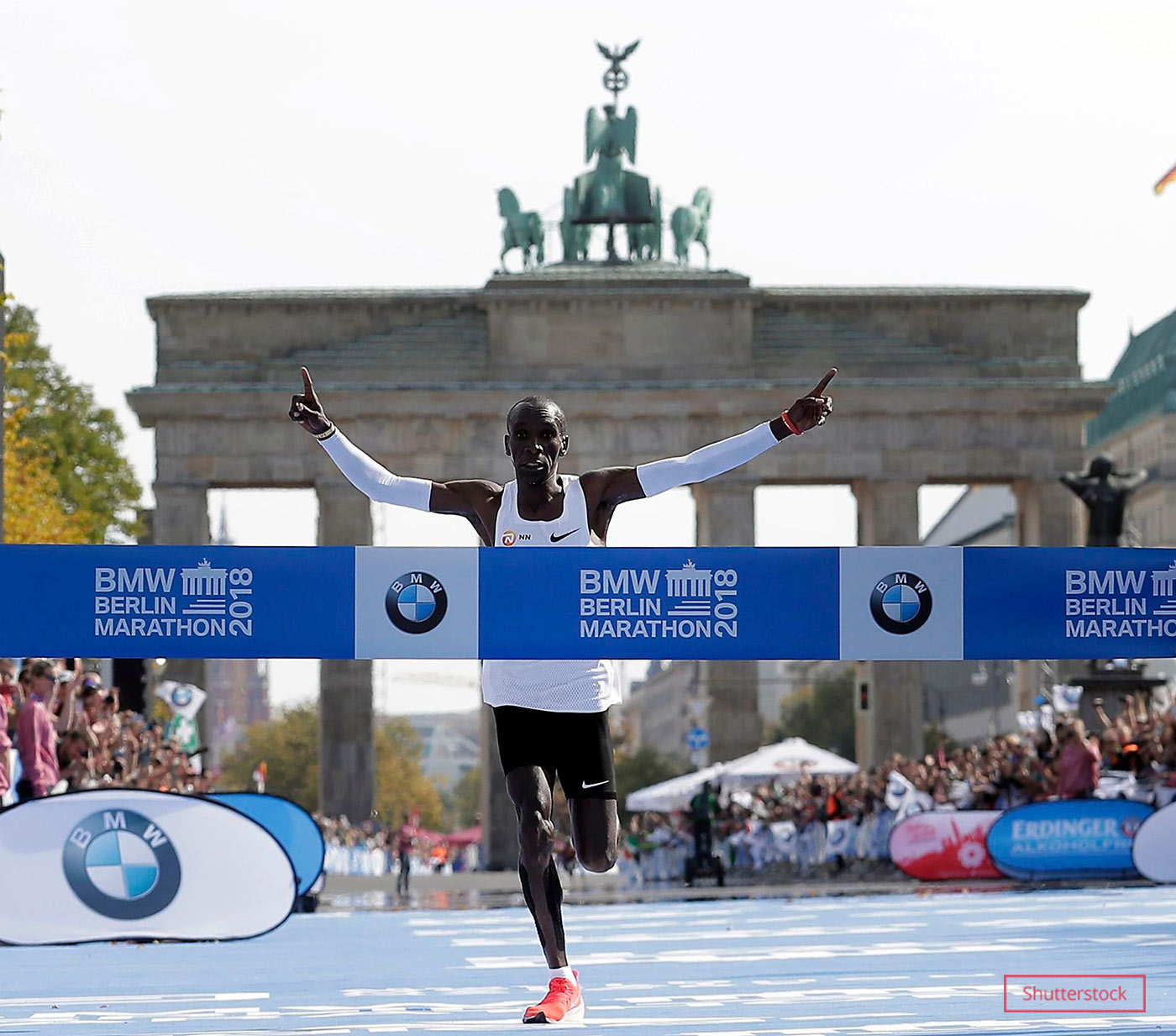 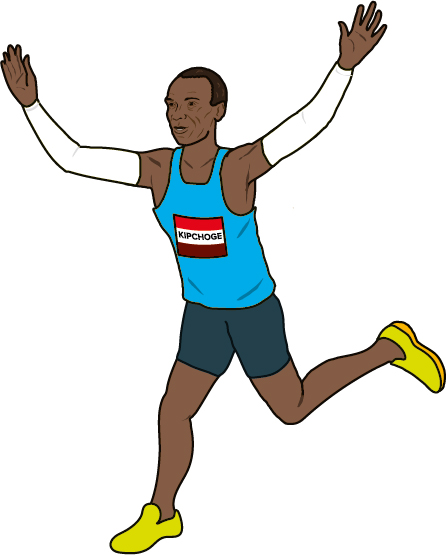