Burj Khalifa: The tallest building in the world

In the past twenty years, architecture and structural engineering has progressed so steeply that soaring skyscrapers have now become a staple feature in many of the world’s largest and wealthiest cities.

But there is an even loftier status that goes with boasting the tallest building in the world.

In March 1996 the Petronas Towers in Kuala Lumpur, Malaysia, overtook the Sears Tower's record as the world's Tallest office building. Stainless steel pinnacles 73.5 metres (241 ft) long placed atop the 88-storey towers brought their height to 451.9 metres (1,482 ft 8 in). Then, in 2003, Taiwan’s Taipei 101 (also known as the Taipei Financial Centre) took the title at a huge 508 metres (1,666 ft). Just one year later, construction on the Burj Khalifa began.

It was to form part of a new 2 km2 (490-acre) flagship development called Downtown Dubai at the 'First Interchange', near Dubai's main business district in the UAE. 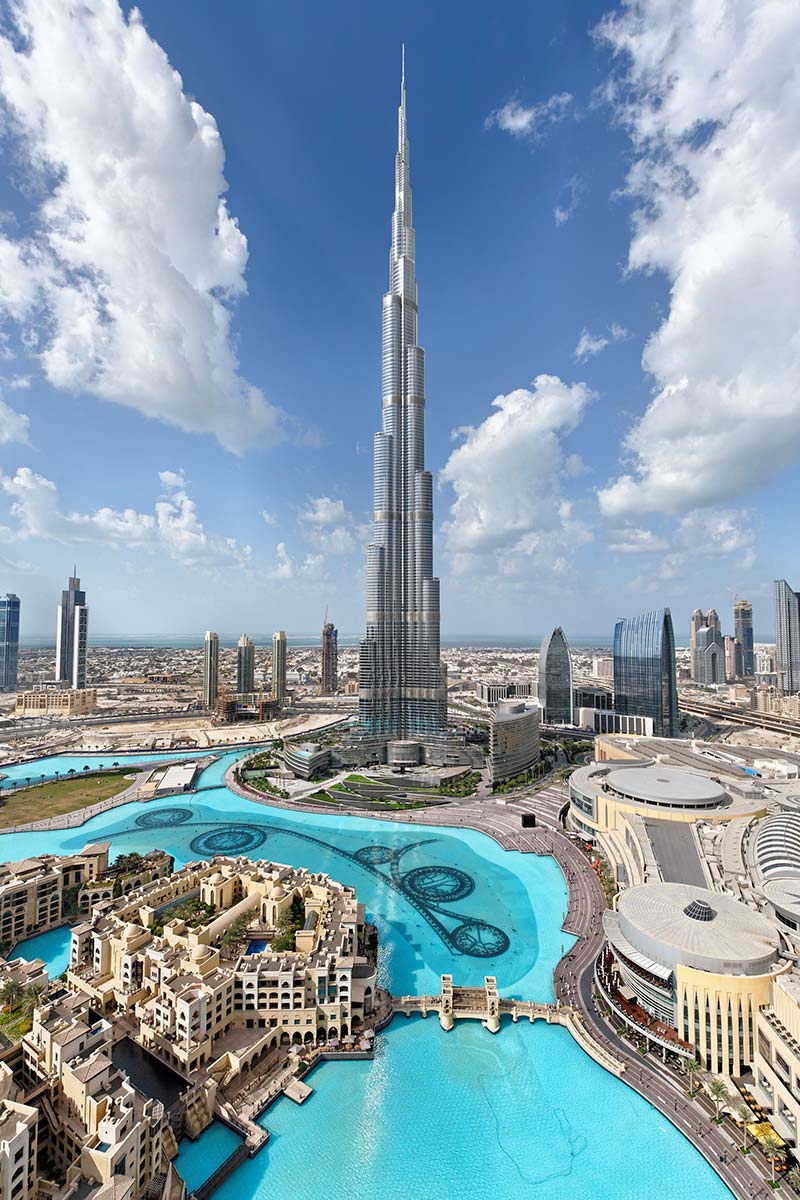 The towering property was developed by Emaar Properties and the architects Skidmore, Owings & Merrill LLP, headed up by renowned American architect, Adrian Smith.

Reaching a breath-taking 828 m (2,716 ft 6 in) into the sky, this new skyscraper would soon be described as a ‘vertical city’ and become an icon of the modern world.

"We’re born with a challenge. A challenge to prove to ourselves first, and to the world, 'Yes we can'," said Mr Ahmed Al Falasi, Executive Director of Burj Khalifa, when describing his initial inspiration for erecting the tower.

All over the globe, people were asking whether it was even possible to construct a building that high – and that was when the Burj was designed to be 'just' 518 metres tall, 10 metres taller than the Taipei.

It actually grew by a whopping 310 metres during the design process – aproximately the height of the Eiffel Tower in France.

Construction began on 21 September 2004, with the exterior of the structure completed on 1 October 2009.

The taller a building is the greater the effects of weather, but the neo-Futurist-style Burj Khalifa was designed with a complex Y-shaped cross section to reduce the effect of wind. 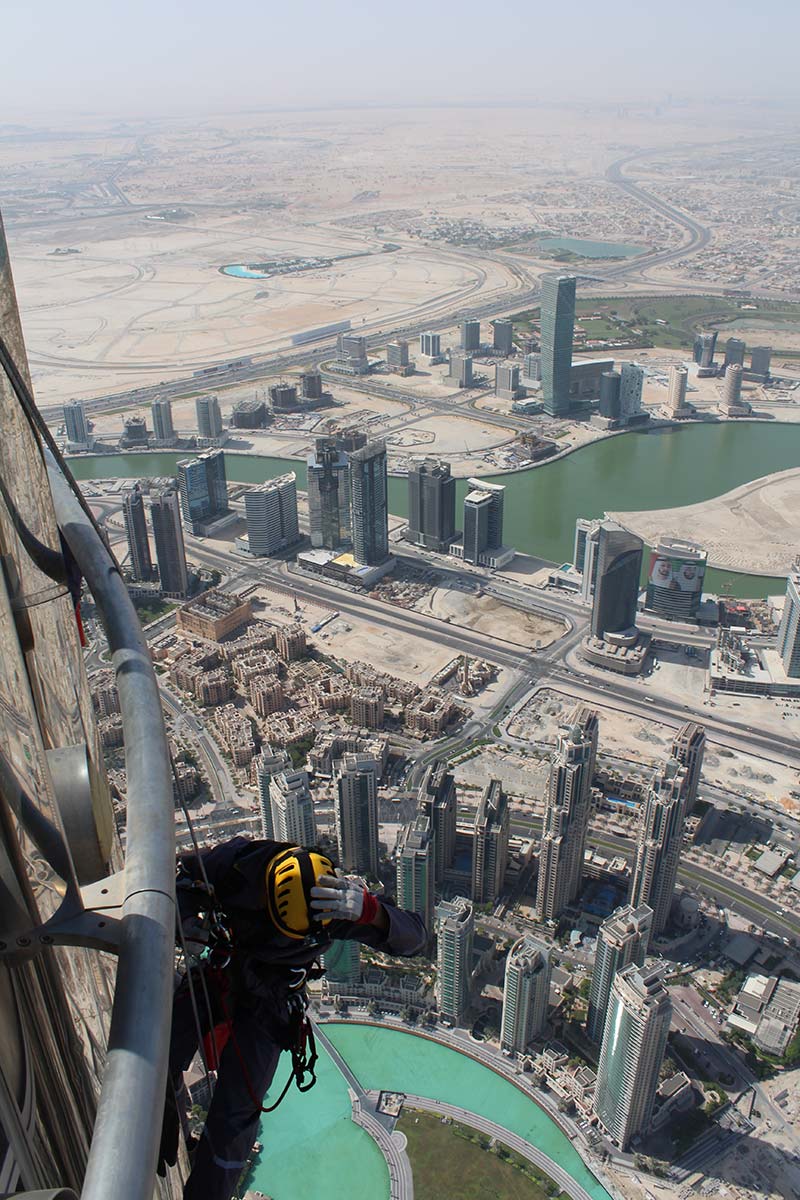 "The Burj is designed to sustain seismic activities to a certain level. It can move in any direction about 1.5 metres," explained Bashar Mohammed Kassab, Senior Manager of Technical Services, Burj Khalifa.

Everything about the Burj is superlative and involves huge numbers: there were more than 12,000 people from all over the world who worked on the construction of the Burj Khalifa.

Almost 26,000 hand-cut glass panels were used in the exterior cladding of the building, which has residential, office and hotel use. It takes about three months to clean the structre from the top to the bottom!

The individual stalks that rise out around the central spire deflect most wind around the building. Chief structural engineer Bill Baker calls it 'confusing the wind'.

The monumental edifice officially opened on 4 January 2010 and was certified as the Tallest building on the planet.

At 828 m (2,716 ft 6 in) tall, the Burj is more than twice the height of the Empire State Building, and almost three times the size of the Eiffel Tower.

In the course of confirming the Burj as the World’s tallest building, Guinness World Records also ratified a number of other lofty achievements for the ground-breaking structure. 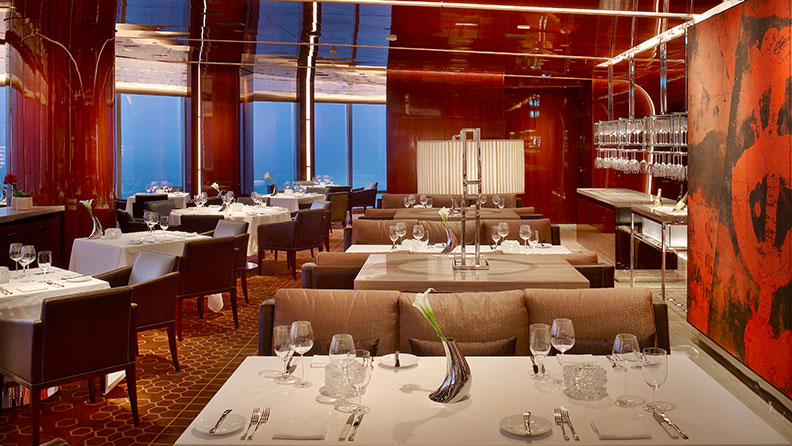 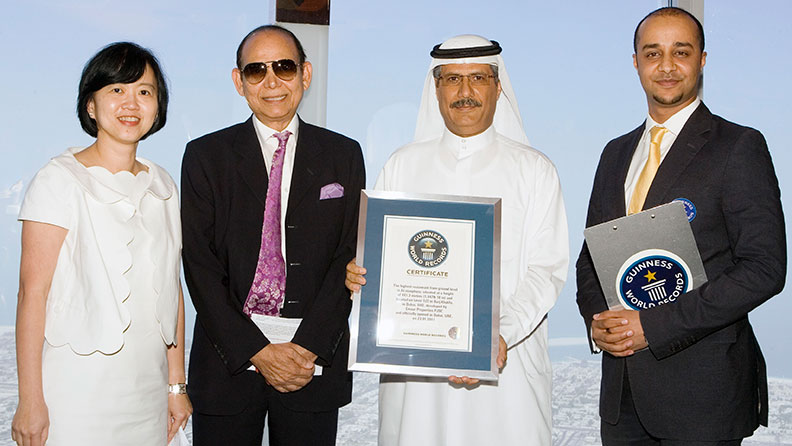 On New Year's Eve 2015, Dubai’s most famous landmark hosted a spectacular display in which fireworks erupted from every side (and the top) of the 828-m (2,716-ft 6-in) skyscraper. In a little under 10 minutes, more than 1.6 tonnes (3,527 lb) of fireworks were released and a new record for Highest fireworks on a building was set.

The mighty structure has also served as the stage for many other record attempts, including the Highest BASE jump from a building and the Fastest time to climb the Burj Khalifa by bicycle (2 hr 20 min 38 sec).

The Burj’s record may be beaten by a Middle Eastern rival in the not-too-distant future.

The Jeddah Tower – formerly known as the Kingdom Tower – is currently under construction in Jeddah, Saudi Arabia, and is designed to reach 1,000 m (3,281 ft).

It has been designed by Adrian Smith, the same architect who designed the Burj. As of 31 December 2016, a total of 38 floors have been completed, and the central core containing elevator shafts and stairwells has reached level 49.

Is it possible to build even farther into the sky? We’ll have to wait and see.