Artists have spent more than 2,400 hours preparing an image made from sand which is so big it can be seen from space.

Titled "Prince of Humanity", the picture is of Sheikh Sabah Al-Ahmad Al-Jaber Al-Sabah, Emir of the State of Kuwait, which was carved out of completely natural red stones sand. It is so big the Emirati Satellite, Khalifa Sat, managed to take a photo of it.

The United Arab Emirates government department created the image to show its love for Kuwait on its national day.

Sheikh Mohammed bin Rashid Al Maktoum, Vice President and Prime Minister of the UAE and Ruler of Dubai, said: "The love of Kuwait and the people of Kuwait is etched into our land... in our hearts... in our history... May beloved Kuwait and its amir, prince of humanity, continue to see years of prosperity and peace." 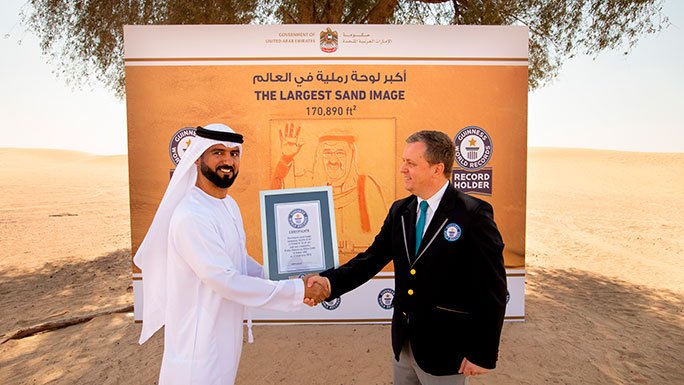 The portrait was created to mark Kuwait's two-day celebration: National Day on Monday and Liberation Day on Tuesday.