Accomplishing one channel is no easy feat – aside from predators in the open ocean and varying water temperatures, one who tackles all seven channels must be prepared to swim for up to 12 hours or more at a time.

It's as dangerous as it is courageous and that’s why in light of this year’s Guinness World Records Day themed "Spirit of Adventure", we’re recognising one of the most fearless adventurers to conquer the Ocean Seven: Elizabeth Fry.

"I first got into swimming really, through my parents. My mom swam and we grew up in Long Beach in Long Island (New York), which was a pretty strong surf. So my parents thought for safety that all five kids would take swim lessons – and I just stuck with it until, well 60! I love it." 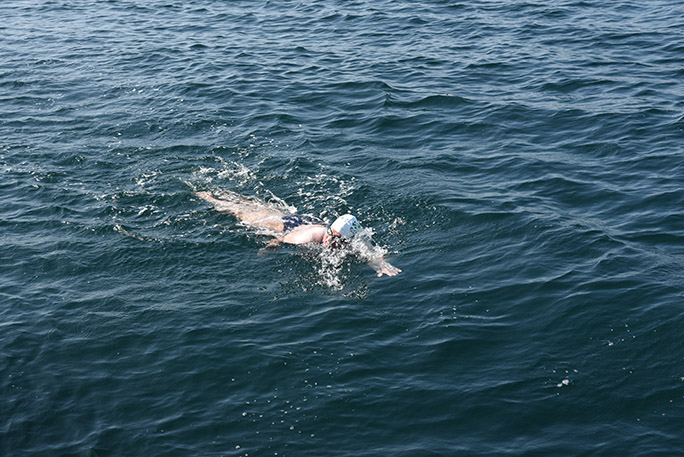 Of her five siblings, Liz was most drawn to the water at a very young age. She remembers stepping foot on the beach and running towards the tumbling ocean waves without any hesitation.

"I didn't even notice if the water was really cold or even really salty. It was strong but really… quiet at the same time. You know when I was a kid growing up I loved to body surf but I didn’t feel good unless I had like two pounds of sand in my bodysuit. I just found so much peace there – and joy."

Liz's mother may have been the reason she began learning to swim, but it was really her father who inspired her to begin marathon swimming.

She took the plunge from completing laps to miles after hearing her father talk about the English Channel. 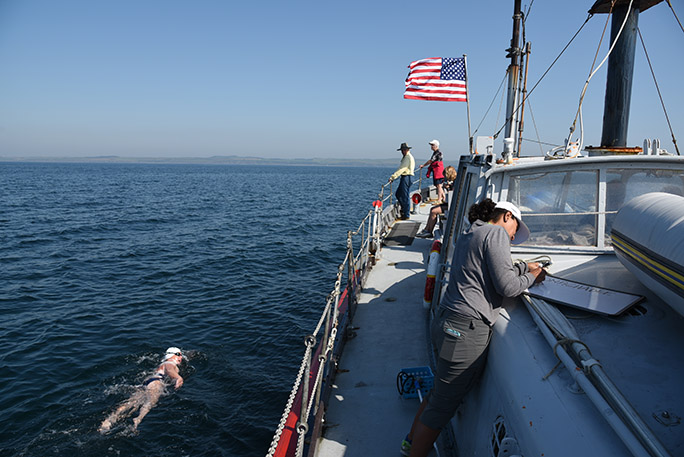 After seeing images of famous English Channel swimmers hanging up on the cabin walls of a Canadian swim camp that she attended in the summers – Liz was hooked, she knew that one day she would live up to her father’s ambitions.

In order to build up her strength to start swimming marathons, she jumped into open lakes and saltwater oceans to start practicing.

She found groups of open water swimming enthusiasts, some of whom had crossed the English Channel before, to help encourage her as she put her plan in place to go from short to long-distance swimming.

Important measures needed to be taken in order to perform a marathon swim including proper training, having a companion who could rescue you if needed, traveling logistics, understanding current directions and ambient sea life. 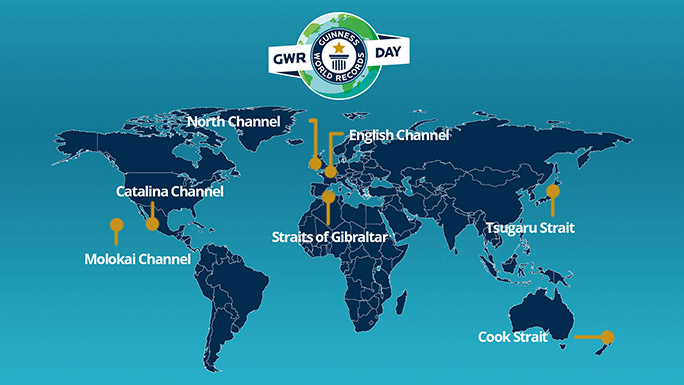 "There are a lot of factors to consider but, you are one of the luckiest people in the world to be standing at the starting line of that marathon race.

"That’s what I think every time before I enter the water and dive off that shore – I think, I am the luckiest person to be able to have this opportunity."

These extensive plans were taken into her Guinness World Records attempt – where she would need to coordinate traveling around the world, and swimming in vastly different open water situations.

One of her biggest fears was swimming the North Channel, which would be the last leg of her adventure.

For that swim, Liz had to adjust to very cold temperatures of 11-14 degrees Celsius and hit numerous amounts of jellyfish, which is always a strong possibility for open water swimmers. 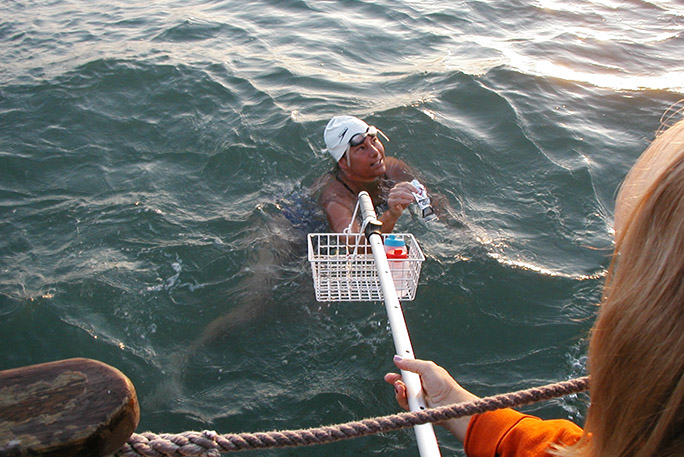 "There are a couple swims that have lots of jellyfish. It comes with swimming, it comes with taking these challenges on. You know you are going to get stung. Some people don’t react, I am one of those people that happen to react.

"Even in North Channel where the stings are really strong, eventually they will become tolerable. You’re really just thinking about the beauty of the swim and the water, and where your hands are going. As much as there were a lot of jellyfish – the water was stunning."

Liz has her sister to thank for her safety on every swim who, as her crew captain and confidant, made sure that Elizabeth had everything she needed – included her feeding pack, medication, and other essentials. 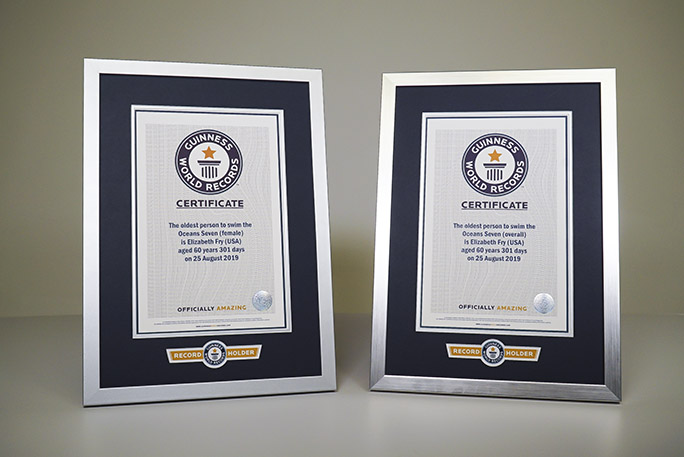 She had been there from the very beginning when Liz first decided to attempt her record title and tackle the Ocean Seven.

But although Liz had feared the North Channel, and loved the Tsugaru Strait, per her father’s words, she felt that the English Channel was the “Everest” of them all.

The channel is known for being very cold, rough, unforgiving in terms of the conditions, which is enough to deter any athlete.

But for her it was the most special, as it was not only her first swim of all seven, it was the one that her father was able to watch her accomplish. 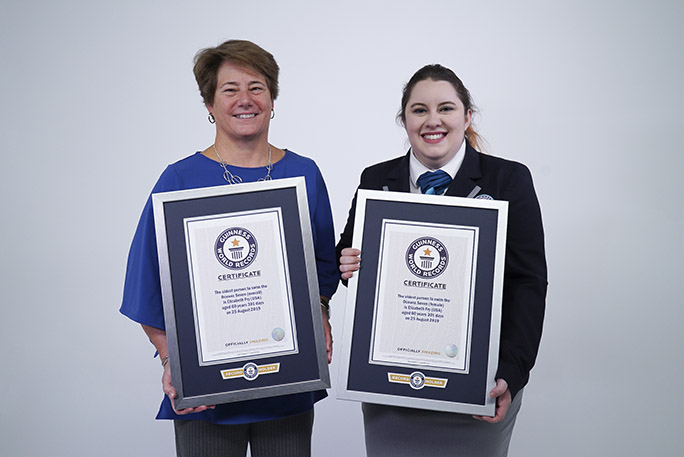 For Liz, the feeling of getting out of the water was one of immeasurable happiness, as she had not only managed to live up to her father’s words, but she also got to see him waiting for her at the finish line.

Tearing up, she described the moment of seeing the look of joy and pride on his face as he watched her come ashore.

Now, Liz is grateful for the experience that she underwent in becoming the world’s Oldest person to swim the Ocean Seven.

She hopes that it is a record that others aspire to pursue in the future, and encourages the swimming community to push themselves to achieve their own record titles.

"I like being the oldest to have done this record because I don’t see myself stopping anytime soon. I might be 60 years old when I have completed the Ocean Seven marathon, but I feel like I’m swimming like a 40-year-old.

"It just shows how 60 really is the new 40, or there’s no reason you ever have to stop doing what you love." 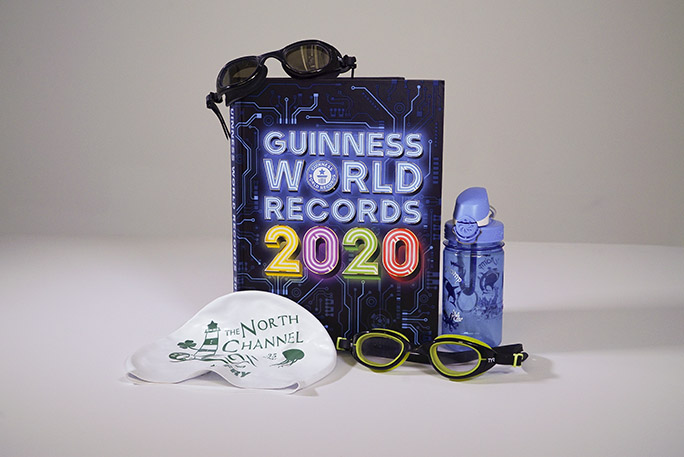 For more updates and the latest in GWR Day news, follow along on our social channels and use #GWRDay.