Video: The penguin-shaped robot that’s skipped into the record books

Robots are not traditionally known for their skipping ability, however one penguin-shaped robot has changed that with a new Guinness World Records title.

Skipping is one of the oldest and best-loved playground pursuits with kids doing it all over the world along with many adults who use it as a fun yet simple way to help keep fit.

Now Jumpen, built at the National Institute of Technology Nara College in Chiba, Japan, has entered the record books with its own skipping record. 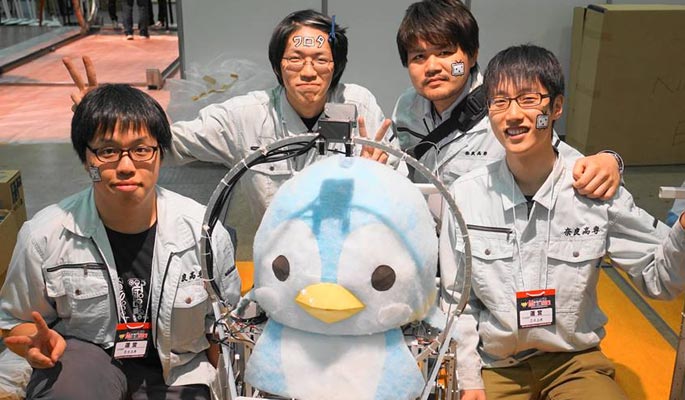 The small electronic being has set a new world record for Most skips by a robot in one minute in an attempt at the Robocon event organised by Japanese broadcaster NHK at the Makuhari Messe convention centre near Tokyo.

A large display counted the number of skips made the diminutive robot which had two members of staff swinging the rope for it.

For each skip to count the rope had to complete a 360˚ revolution and be cleared by Jumpen.

In the end Jumpen completed 106 skips, successfully clearing the rope every single time.

Jumpen is by no way the first robot to enter Guinness World Records though: with artificial intelligence improving all the time, records are regularly being set.

In 2010 the First robot wedding was conducted by I-Fairy in Tokyo, Japan, when it presided over the marriage Tomohiro Shibata and Satoko Inoue while fellow Japanese robot FORPHEUS (Future Omron Robotics Technology for Exploring Possibility of Harmonized aUtomation with Sinic Theoretics) is the First robot table tennis tutor, a record it set in 2015.

FORPHEUS is easily able to act as a coach thanks to cutting edge vision and motion sensors it can use to gauge movement during a match and features an array of cameras that are situated above the ping pong table which monitors the position of the ball 80 times every second.