Welcome to the Guinness World Records Italian Show – a weekly video series which features the most astonishing, shocking and awe-inspiring record attempts from the seventh series of Italy’s Lo Show Dei Record.
This week’s episode is not for the faint-hearted as we see extreme circus duo "Monsters of Schlock" duo Burnaby Q. Orbax and Sweet Pepper Klopek take on some eye-watering record challenges.
Sweet Pepper was up first and successfully achieved the Heaviest weight lifted with hooks through the cheeks with an incredible 6 kg (13 lb 3.6 oz) haul. 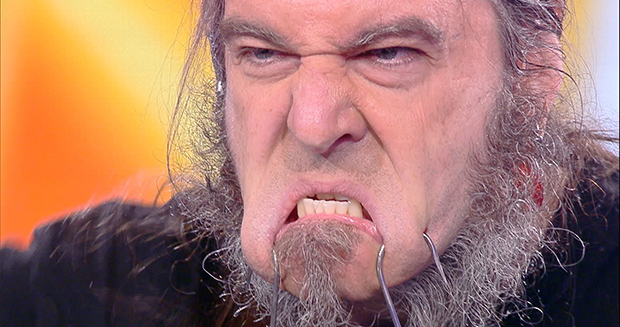 Burnaby then smashed his own record for the Heaviest weight lifted using a hook through the forehead, raising a 4.5 kg (9 lb 14.73 oz) weight.
Following the attempt Burnaby said: "It hurts real bad. But it's so exciting!"
Burnaby holds a variety of extreme Guinness World Records titles including Most nails inserted into the nose in 30 seconds (15) and Most motorcycles driven over the body whilst laying on a bed of nails in two minutes (70).
One of the fearless record-breakers’s most shocking challenges took place on 25 October 2011, when he painfully heaved a 4,050-kg (8,929-lb) truck for 111.7 m (366 ft 6 in) in Vancouver, Canada to set a new record for the Farthest distance to pull a vehicle with meat hooks in the back. 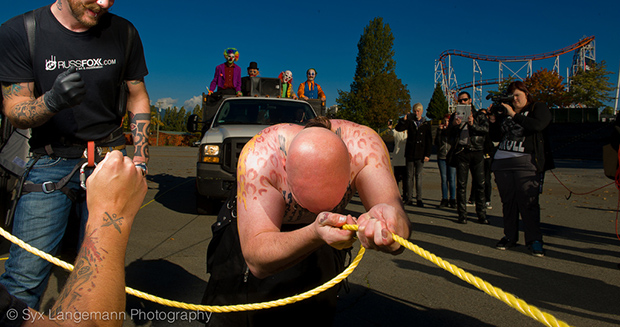 Fellow 'Monster' Sweet Pepper also holds a number of titles including the Most animal traps released on the body in one minute (20). Make sure you don’t miss an episode by subscribing to the Guinness World Records YouTube channel.