Sick of Johnny Manziel stories describing what he had for dinner?

Sick at the thought that Andy Dalton (Andy Dalton!) will make $22 million in the next six months alone?

Well, how about a story on Matthew Stephens?

If you haven't heard of Matthew, we can't blame you. He's not on any NFL roster and isn't enrolled at an SEC school. But, as training camps and summer gridiron sessions get going across America, Stephens has forced us to train our football-loving eyes across the pond.

Last week, Matthew's record attempt at the fastest half marathon in American football kit was officially verified as successful. He clocked an official time of 1 hr 43 min 42 sec at the Hastings Half Marathon in Hastings, East Sussex, UK, earlier this spring.

It may not sound natural to have a UK citizen attempt an American football-related record, but Matthew has a unique story. And, as a fan of the sport since growing up in the '80s, he was out to prove a point.

"It seems that many Brits consider American Football to be an inferior sport," Matthew said, "suggesting that all the padding somewhat softens the players' physicality, and that the stop-start nature of the game leads to lower levels of fitness.

"I wanted to prove that an American football player can perform sustained exercise. Running a half marathon seemed like a reasonable way to disprove the sport's critics."

Matthew started running competitively in 2011. Two years later, an American football team named the Hastings Conquerers formed near his home and he jumped at the chance to join. By the time the Hastings Half rolled around this year, he was ready to combine his two loves - representing his team and his sport while competing against the public. 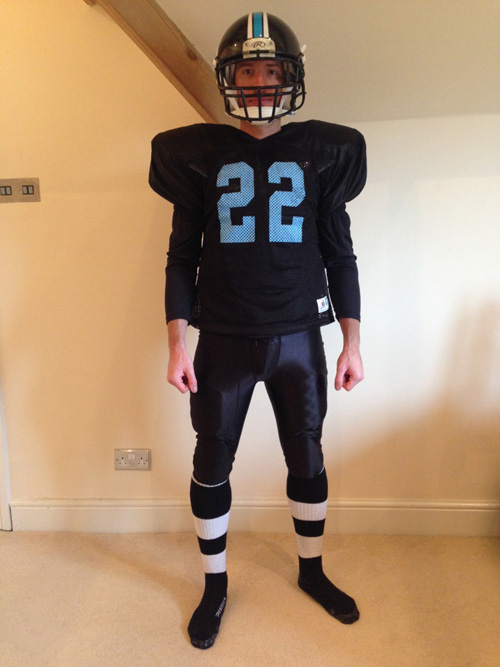 Rules stated that Matthew had to wear at least a jersey, pants, helmet, shoulder pads, hip pads, thigh pads, knee pads, athletic supporter, and knee-high socks. Anything else was deemed an optional accessory, like the coccyx pad he chose to wear, because that's what he was used to during games. As with all marathon records, the one permitted variation was running shoes.

Currently 31, Matthew has a goal of running 100 marathons by age 40, and he's on pace so far. We're pretty sure after this race, getting back to a T-shirt and shorts will make life on the course a lot easier.

"I applied to Guinness World Records so that I could brag about this achievement and have something to show for my efforts," Matthew said. "I will have a story to tell when meeting new people. I will impress my future grandchildren with my sporting prowess."