This Sunday France celebrates Bastille Day, their national holiday (known there as La Fête Nationale, or Le quatorze juillet). The holiday celebrates the 1790 Fête de la Fédération, held one year after the storming of the Bastille - seen as a symbol of the uprising of the modern French nation.

Here at Guinness World Records, we have seen a great number of world record achievements set in France and by French men and women over the years. Who better to tell of these achievements than some of our native French staff! I sat down with two of them to ask about their favourite experiences adjudicating world record attempts in France:

First, Anne-Lise Rouse told of her time with legendary French chef, Joel Robuchon, setting a record for the largest serving of mashed potatoes:

" This was my first adjudication in France and I was quite worried about adjudicating in front of the Futuroscope Amusement Park crowd! The organisers decided to set this new Guinness World Records title to celebrate the park’s 25 th anniversary and also pay tribute to Chef Joel Robuchon’s world renown mash.

Students from all the cookery schools in the region were on hand to help as well the chefs from the park. On the day, we had be on site at 5 am, so the chefs could start the preparation. All morning the atmosphere in the kitchen was electric and you could hear chefs shouting across the different production lines at all times.

At 10 am, they had broken the record by over 500kg but still wanted to keep going even though they started to run out of supplies! They called all the local suppliers for some emergency provisions and managed to get enough potatoes to cook for another two hours!

Joel Robuchon was ecstatic to see how enthusiastic the whole team were and how record-breaking brings people together. By noon the attempt was over and the final record approved. To celebrate this achievement, they kindly invited to have lunch prepared by Robuchon’s l’Atelier Team with his family and friends in the park - which was of course delicious." 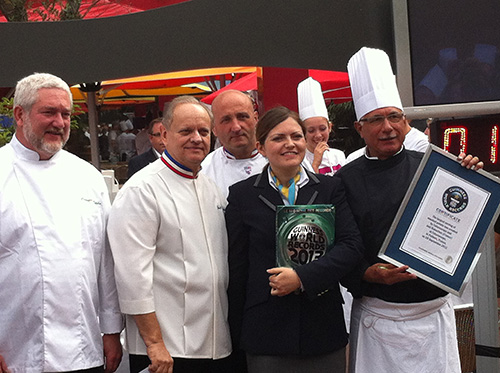 Next, Justine Tommey recounts a handful of the many French records she's witnessed over the last few years:

" I was the Official Adjudicator on the original series of ‘ Le Monde des Records’ which aired on W9 in 2008. There, I met quite a variety of record holders: a man who would eat the most cockroaches in a minute and who owned a restaurant that served insect based food (from crickets pizza to worm pastas, the menu had it all!) – I must admit I didn’t have the courage to taste one. I met a man who smashed water melons with his head, a stripper who would take off his trousers in the fastest time ever and some competitive sausage & garlic eaters! But not one those could top dedicated record holder Michael Levillain who set a record title for the most nuts crushed by sitting down – a very painful record to watch.

I also got to witness multiple record holder, Taig Khris, jump from a platform on the Eiffel Tower on inline skates. That was SCARY! Taig jumped from a platform on the first floor of the Eiffel Tower into a HUGE half-pipe 12 m 50 cm below in front of a crowd of fans. He had to land on his two feet and stay upright for the record to be valid, which I'm glad to say he did. 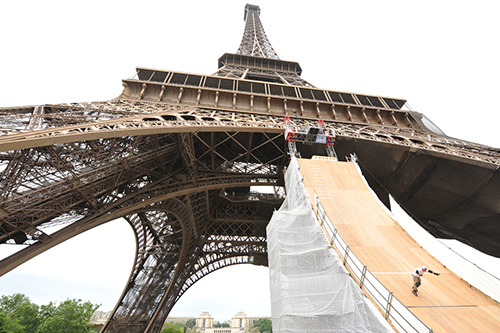 One of the tastiest record I adjudicated was for the largest tiramisu, in Lyon. Famous pastry chefs had joined forces to make a giant tiramisu for the ‘Salon du Chocolat’. The tiramisu was so big it had to be stored in an ice rink! They made the tiramisu in the shape of France as the previous record was held by Italy. I had to ensure it was edible to approve the record, and it was indeed very tasty: 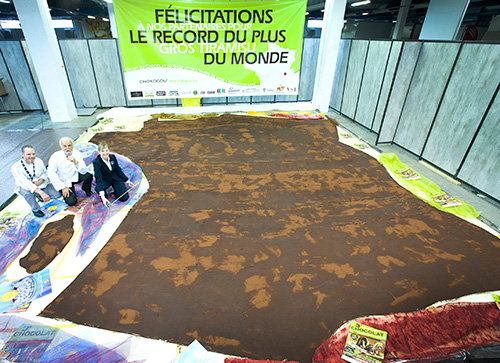 Finally, and one of my career highlights, was to adjudicate a series of records at the Moulin Rouge for Guinness World Records Day 2010. The girls at the famous cabaret attempted the record for the most high kicks & splits in one minute, it was very impressive. 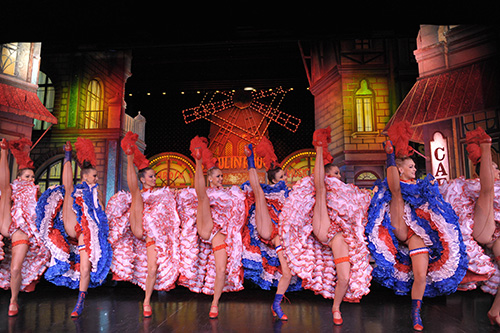 The official juggler and acrobats also achieved new records including one for the most steps climbed with a person on the head, on the steps of the vary famous Sacre-Coeur in Montmartre! All in all it was a very memorable experience." 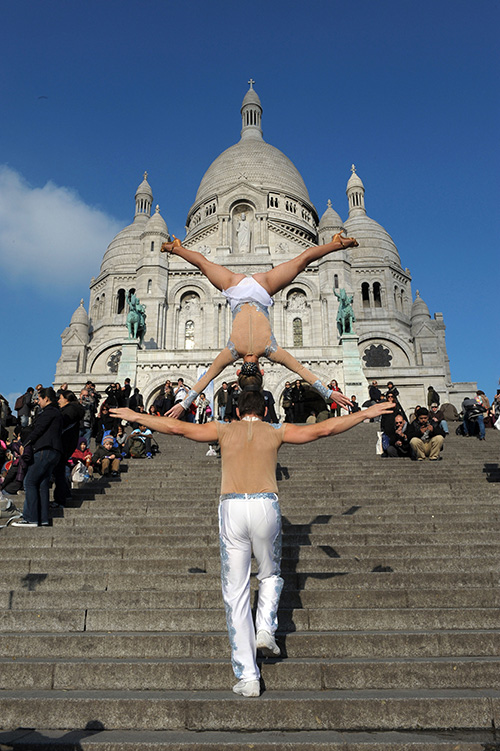