Valentine's Day is a time when we're reminded of the power of love and the importance of commitment.

It's also, apparently, an opportunity to stock up on virtual loot as I found out when I was called upon to witness an attempt by the community managers at Massively multiplayer online role-playing game Rift to have as many of their players married in-game as possible in just 24 hours.

The attempt was organised in part to show off a new wedding system within the game which allow players to formalise their commitment to each other as well as bag some unique in-game stuff for taking their relationships to the next level. 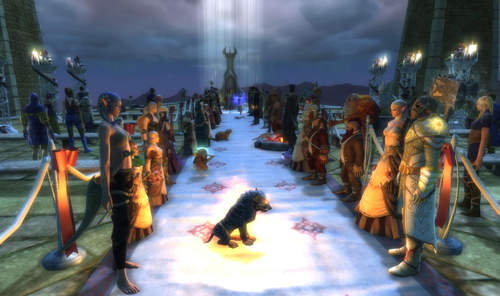 The ceremony I bore witness to was overseen by one of the game's senior community managers and saw 17 happy couples tie the digital knot in a short and sweet procedure that was sealed, in an almost-traditional fashion: by typing the "/kiss" command into a text box.

After the mandatory snogging was over, it was on to the much more serious business of the group wedding reception, complete with music, mead and dancing.

Ceremonies like this took place throughout Rift's setting of Telara on Valentine's Day, with a total of 21,879 couples saying their special vows throughout the day.

Congratulations to the happy couples. May you have many years of health, happiness, and epic loot.