Jiroemon, who is an incredible 115-years-old, welcomed Craig to his home to receive a hand-delivered copy of the Guinness World Records 2013 book directly from the company's London headquarters.

When the supercentenarian was born, Marconi had yet to send the first radio communication over open sea, Bram Stoker's novel Dracula had yet to be published, and the composer George Gershwin had not even been born.

Queen Victoria was still on the throne, preparing to celebrate her Diamond Jubilee. Other extant figures at the time of Jiroemon's birth include the composers Johannes Brahms and Guiseppi Verdi, the US novelist Mark Twain and the French artist Henri Toulouse-Lautrec. 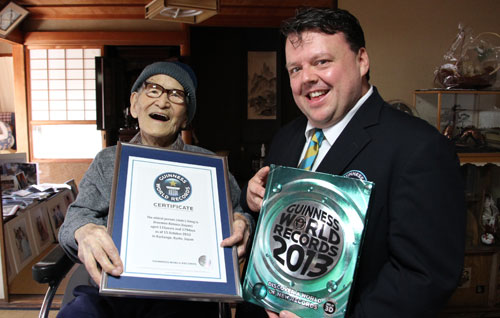 Jiroemon attained the status of the world's oldest living man on 14 April 2011, following the passing of America's Walter Breuning at the age of 114 years 205 days.

Jiroemon appears in the 2013 edition of the Guinness World Records book, where his record is acknowledged as one of the fundamental absolutes of human achievement.

Following his visit to Jiroemon's home, Craig said: "It's been a long journey from the centre of London to the remote and picturesque countryside of Kyoto Prefecture. But it has been worth every minute. The record for oldest living man lies at the very heart of Guinness World Records, along with his female counterpart, Ms Besse Cooper of the USA, who is Mr Kimura's senior by 236 days. To be able to present Mr Kimura his own copy of the book in person is truly an honour and, for me, a lifetime ambition. He is an exceptional person - we know of only four other male supercentenarians alive today, and incredibly, he is only the third man in history to reach the age of 115."

On receiving his copy of the book, and his official Guinness World Records certificate, Jiroemon said, in loud, clear English: "Thank you very much!" Continuing in Japanese, he thanked Craig for travelling all the way to Kyotango and said how appreciative he was of being acknowledged by Guinness World Records as the oldest living man.

During the historic meeting, Jiroemon learned that he will become the oldest living man ever documented in history on 27 December 2012, succeeding Danish-American Christian Mortensen, who lived to 115 years 252 days. "I look forward to returning to Kyotango again to congratulate Mr Kimura," said Mr Glenday.

Craig travelled to Kyotango as part of a trip to Japan to mark the publication of the 2013 Guinness World Records international edition.