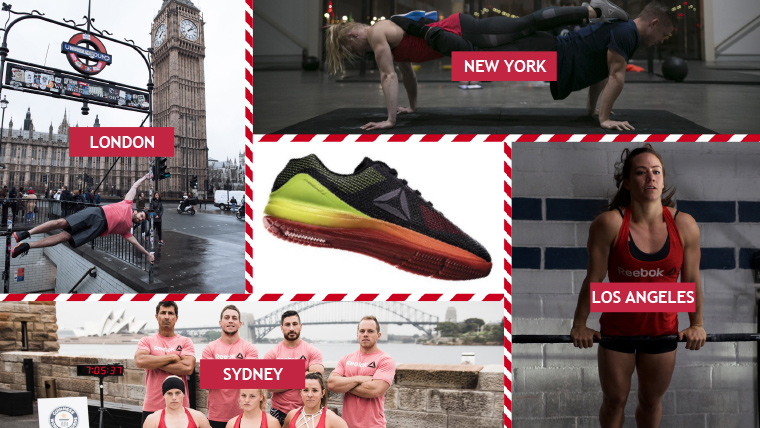 For the launch of its Nano 7 shoe, Reebok was looking to create a global event that would capture the imagination of the media and the international fitness community, positioning the Nano 7 as the ultimate training shoe.

Echoing their brand purpose, “To inspire people everywhere to be their best – physically, mentally and socially”, Reebok were not content with setting one or two new global superlatives: they wanted to re-write the history books by shattering more fitness records in 24 hours than any other shoe brand on the planet.

The challenge would span four cities on three continents with events taking place in Sydney, London, New York and Los Angeles. Participating in the events would be 33 fitness fanatics ranging from Reebok athletes through to 10 year old fitness phenomenon Milla Star and actor Max Greenfield.

Guinness World Records worked with Reebok, their agency M&C Saatchi Sport & Entertainment and Reebok partner Cross Fit to create a list of over 60 records that would showcase the Nano 7’s versatility, ranging from popular functional fitness challenges and iconic feats of strength to amazing demonstrations of acrobatic athleticism such as barbell back somersaults. After all, why just tell people a shoe is versatile when you can show them?

On 1st February 2017 - the day of the activation - live updates from the events were featured on Reebok, Guinness World Records, and participants’ channels. Exclusive media partners like Men’s Health, SELF and Ask Men were also in attendance to share live updates via various platforms. The story of Reebok’s 44 new Guinness World RecordsTM titles was then told on 9th February with the release of a two minute video to global media, on owned channels, and by athletes. 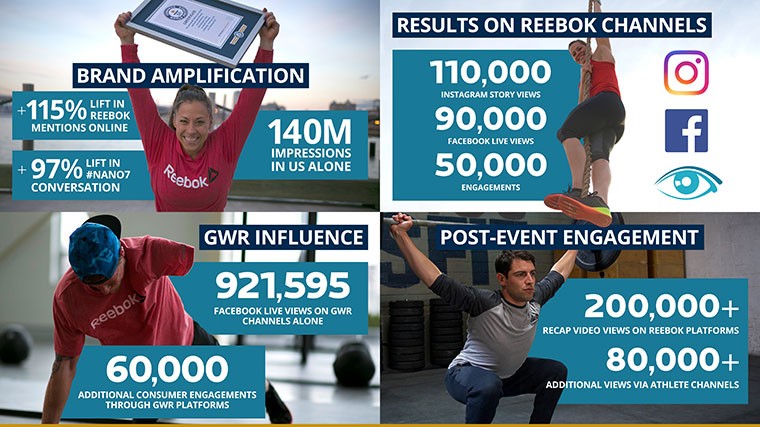 Within a week of the video being released on 9th February, the story of Reebok’s incredible multi-record-breaking achievement had clocked up over 140m media impressions in the US alone with social posts on the day racking up an additional 12m impressions.

For Reebok’s owned social media channels, the launch garnered over 90,000 views globally via its Facebook Live broadcasts and the story generated Reebok’s highest ever level of engagement on Instagram.

In terms of social media impact through earned channels, Reebok saw 115% rise in online brand mentions while usage of #Nano7 increased by 76% with a 97% uplift in the number of conversations featuring the hashtag.

Instead of using a global superstar that would broadly reach a massive audience, the activation leveraged the power of the many health and fitness influencers taking part in the record attempts, dozens of authentic personalities that interact closely with their followers for more personal and targeted engagement. Every single athlete that participated gave constant updates across all social platforms from Snapchat to FB Live to Instagram stories

Engagement across Guinness World Records’ owned media channels amplified the story even further with over 60,000 engagements as well as over 921,000 views on Facebook Live.

Working with Guinness World Records on this project gave us the credibility and broad interest level we needed to bring a unique message to the masses. Their partnership in helping us conceive and execute a massive undertaking such as this - breaking 44 world records in 24 hours across 4 cities on 3 different continents - was nothing short of remarkable. Working with the GWR team allowed us to tell a unique story to a broad audience on a large scale that we otherwise could not have achieved, and generated genuine interest in and conversation around our brand and product.