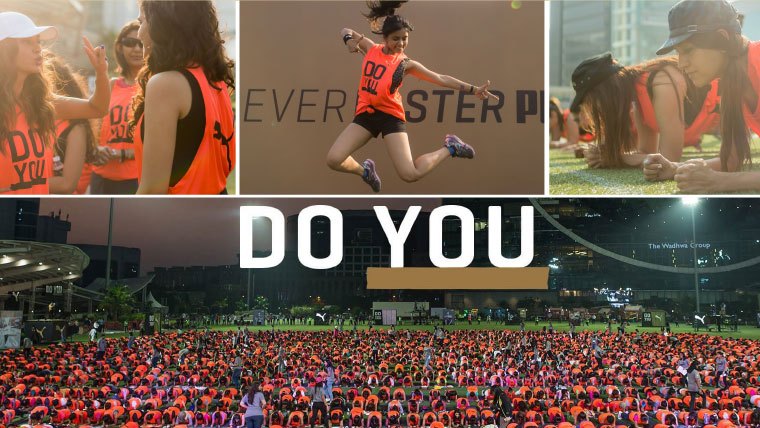 In 2016 Puma launched ‘Do You’, a global campaign with the objective to support and empower women through sport. Puma India wanted to create a high-profile event that would mark the culmination of their national campaign. It was important that this event should embody the campaign’s central call to action for women to find and celebrate their inner strength and that the event should unite women across India.

Puma invited women to come together in Mumbai to attempt the Guinness World RecordsTM title for the Most people holding the abdominal plank simultaneously.

The campaign was launched two months ahead of the record attempt through a series of viral videos featuring everyday women sharing inspiring stories. The second phase of the activation consisted of a multichannel advertising campaign depicting female influencers performing a plank, with the messaging including a call to action to take part in the record attempt and get involved in the ‘Do You’ movement. Puma incorporated the Guinness World RecordsTM Official Attempt logo across all channels carrying promotional activity, thereby building anticipation to the event.

The campaign reached its climax when 1,623 women gathered in Mumbai and successfully set a new Guinness World Records title. The record attempt was live streamed on Facebook, sparking conversations across social media with a number of high-profile celebrities sharing the record-breaking event.

Breaking the Guinness World Record™ has been an icing in the cake by giving women a feeling of community achievement. We hope this inspires women to always believe in themselves, work on their core strength and to live the philosophy of Do You.