When it comes to scaling some of the world’s most deadly mountains, Latina climber Viridiana Álvarez Chávez shows no fear. 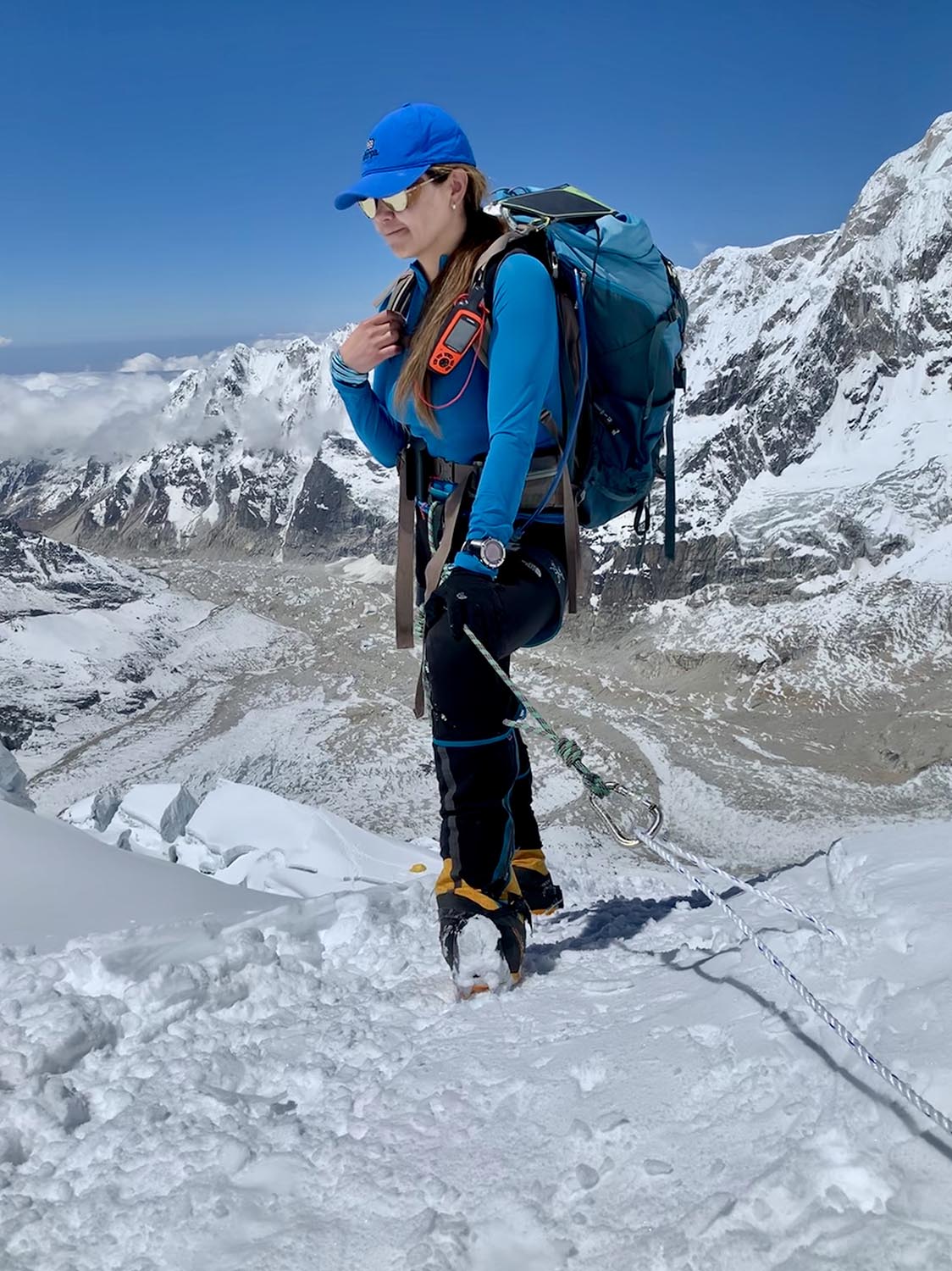 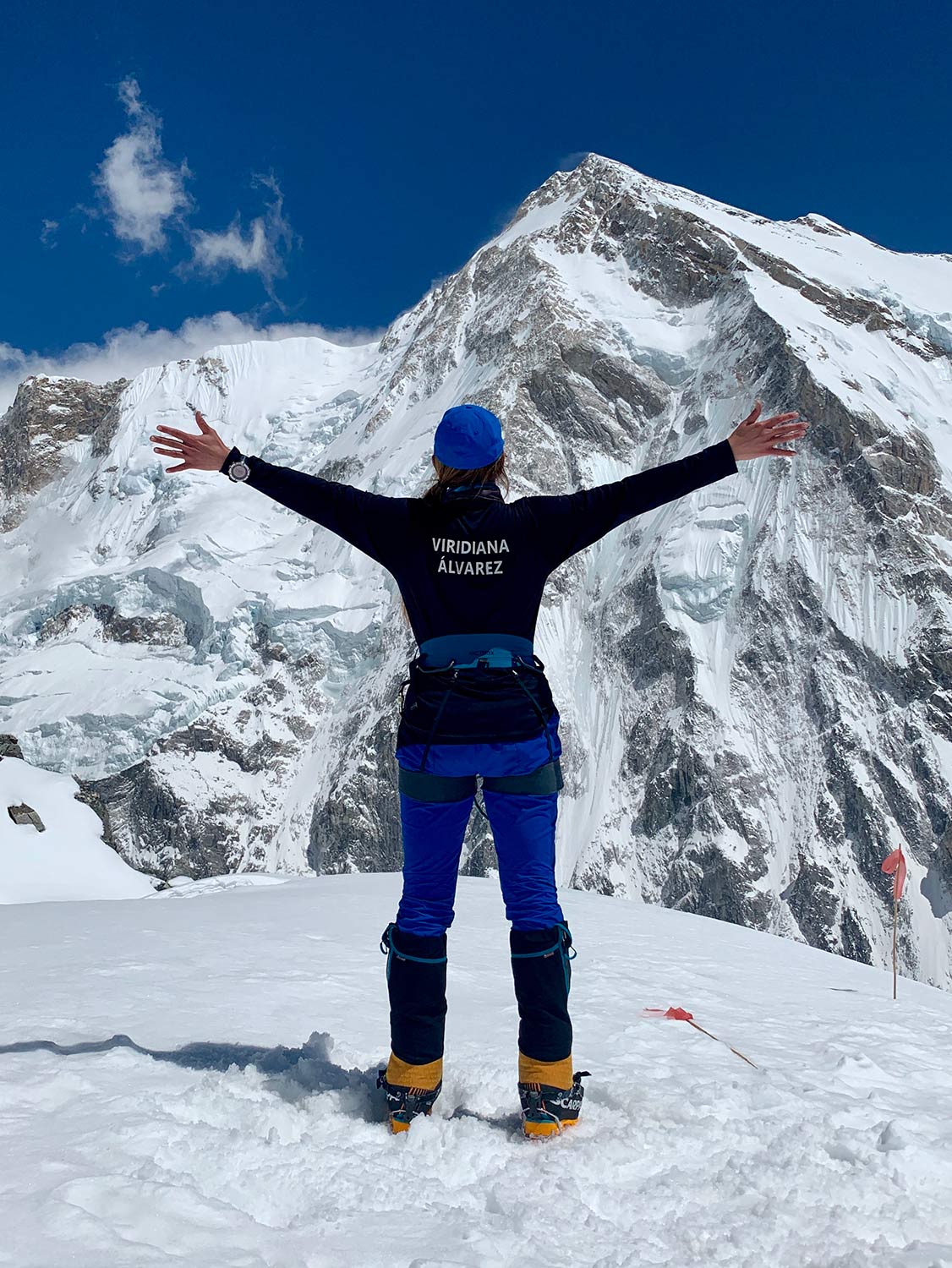 With a passion for defying the odds, Viridiana's mission in life is to utilize her adventures to teach young minds around the globe that anything is possible.

Growing up in Aguascalientes, Mexico, Viridiana was always fascinated by the environment that surrounded her. Although organized sports were always an option, it was the fusion of nature and physical strength that truly appealed to her. A born athlete, exercise was always very important to her, so as an adult, it was an activity she regularly practiced.

A surprise to many, mountain climbing became a sport she fell in love with in later years, as it was running that actually led her to discovering her enthusiasm for the extreme sport.

These key moments would be essential to her journey into making history as a Guinness World Records title holder, for scaling some of the most dangerous peaks of the world.

Motivation is the key factor to all of Viridiana’s accomplishments, as it is the one tool she utilizes in all of her efforts to combat fear and maintain persistence. 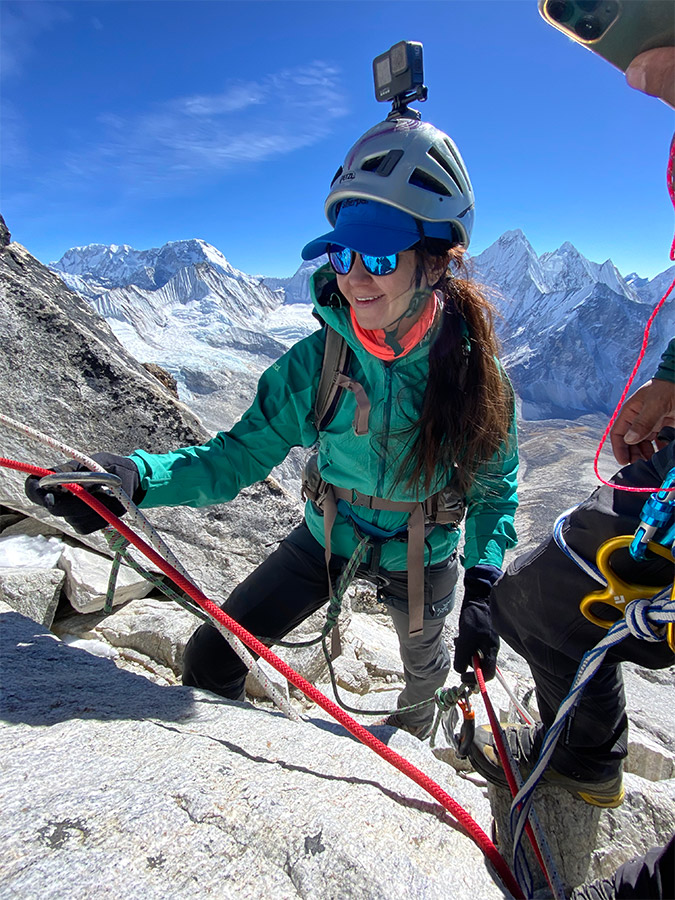 Viridiana was not always a rock climber, in fact, her passion for athletics is what eventually led her to entering the extreme sport.

At first, she set her sights on an achievable goal - to complete a 10k run.

That training took place day after day, and she eventually liked it so much that upon completing her first race, she signed up to do a half marathon (13.1 mi) and then a full marathon (26.2 mi).

But her running ventures were simply not enough of a challenge for the aspiring Latina athlete. She decided to take it a step further by completing a half IRONMAN, which is one of a series of long-distance triathlon races organized by the World Triathlon Corporation.

Upon reaching yet another ambitious personal goal, Viridiana felt that land and sea would no longer suffice as adequate terrain to push her athletic abilities. Instead, she needed to aim for the skies. 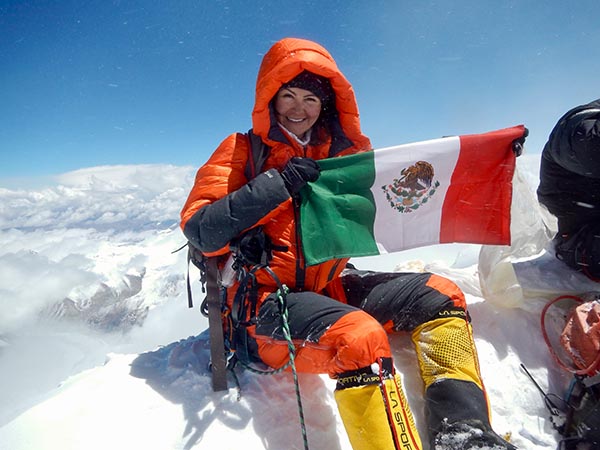 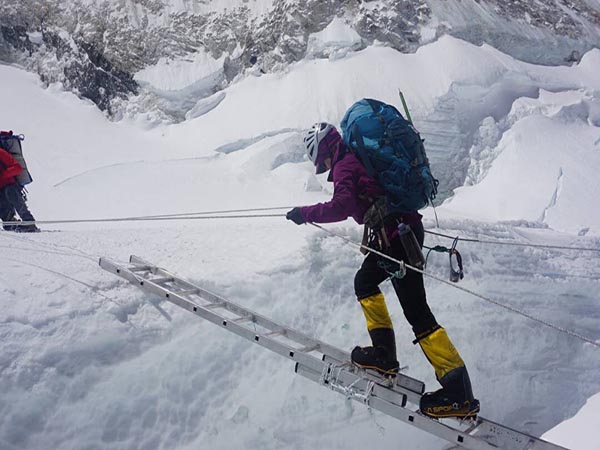 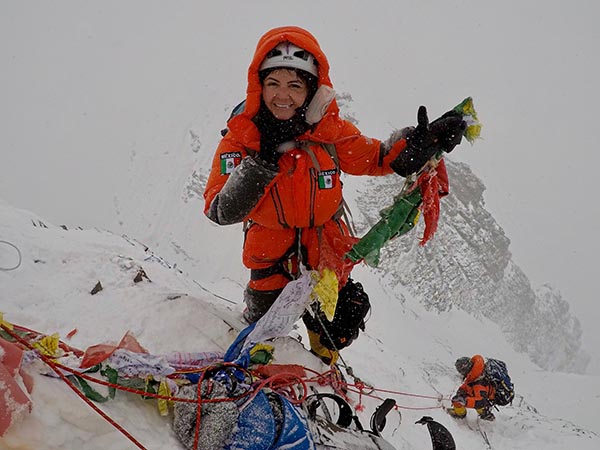 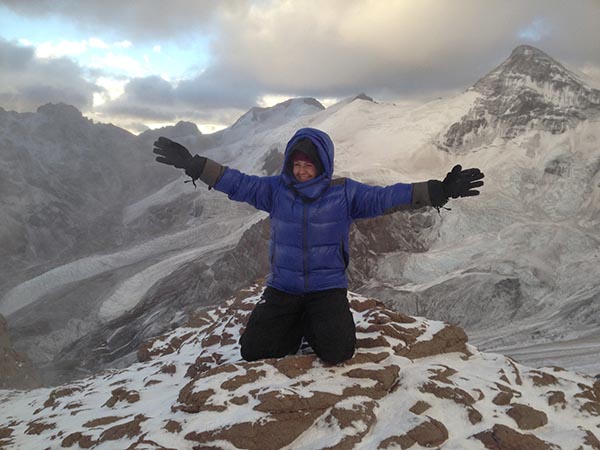 And so, with determination and eagerness, the once light-jogger put on her very first set of hiking gear, and learned just what it meant to fight gravity with your entire body as one scaled up the sides of a rocky cliffside.
In the span of just two years' time, she had gone from running for her first race to scaling Mexico’s tallest mountain, Pico de Orizaba (5,636 m; 18,491 ft).
It was then that Viridiana truly became connected to the sport. Without truly being able to describe the feeling, she mentions:
"Mountains are the place I can challenge myself and know myself better.”

Prior to Viridiana attaining the record for the fastest ascent of the top three highest mountains with supplementary oxygen (female), the title was previously held by Go Mi-Sun (South Korea), who achieved the feat in 2 years 2 days.

Feeling the need to take her new passion for mountain climbing a step further, breaking an official GWR title was the perfect way to satisfy her boundless ambition.

Her journey began in 2017 with the highest mountain of them all: Everest.

Just a year later, it was followed by K2, the second-highest mountain in the world and considered by most as the most dangerous, based on the number of lives it has claimed. As American mountaineer George Bell once put it, "It's a savage mountain that tries to kill you." 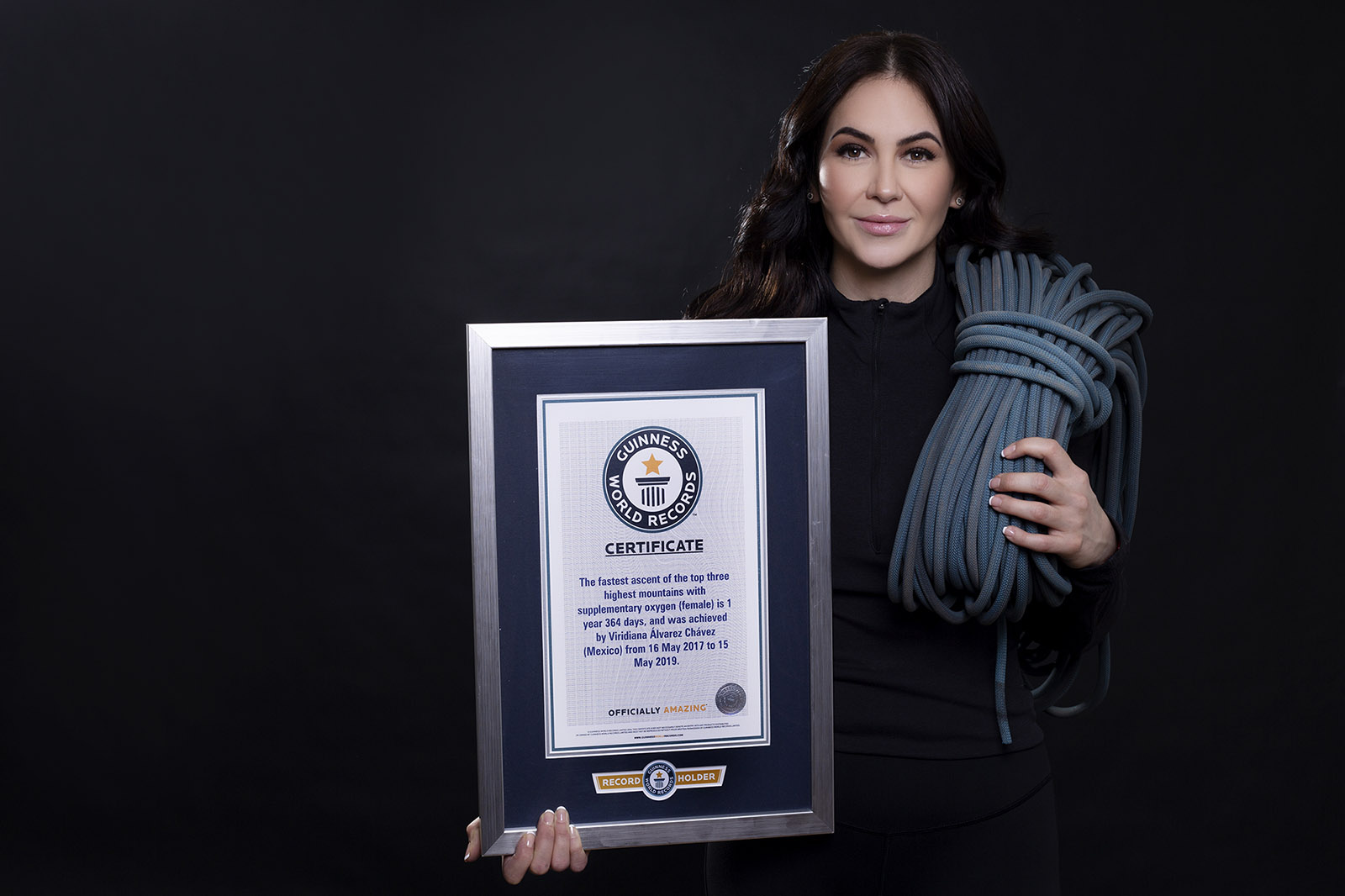 While Everest gets renowned attention for being the world’s highest peak, it is actually K2 that is the most treacherous. Of the five highest mountains on Earth, K2 is the one climbers must watch out for, as approximately one person dies on the mountain for every four who reach the summit.

But yet, with striking motivation, Viridiana finished her ascent of K2 in 2018. Her last conquest of the trio was Kangchenjunga which she officially completed on 15 May 2019. That day Viridiana made history for herself and her country, by becoming the new title holder after completing her expedition in an astonishing 1 year 364 days. Along the way, she also became the first Latin American woman to successfully summit K2.

“My career as a mountaineer started with an unusual and inspirational purpose: a simple personal challenge to exercise, but I ended up giving up my office job; risking comfort to experience the magic of the mountains.
It was proof that dreams do not have to be lifelong dreams and that anyone who sets them can achieve even what are considered ‘unattainable goals,’ such as breaking a world record,” Viridiana said.
Her next ambition includes conquering the 14 highest mountains in the world, and become the first North American to do so. She already has five down, and is building up the momentum to conquer more.

Life Outside the Mountain Range

In addition to mountaineering, Viridiana serves as a public speaker during youth conferences and events to promote a message of breaking paradigms.

With her work, she highlights the importance of emotional intelligence, a positive attitude, discipline, and consistency to achieve goals. 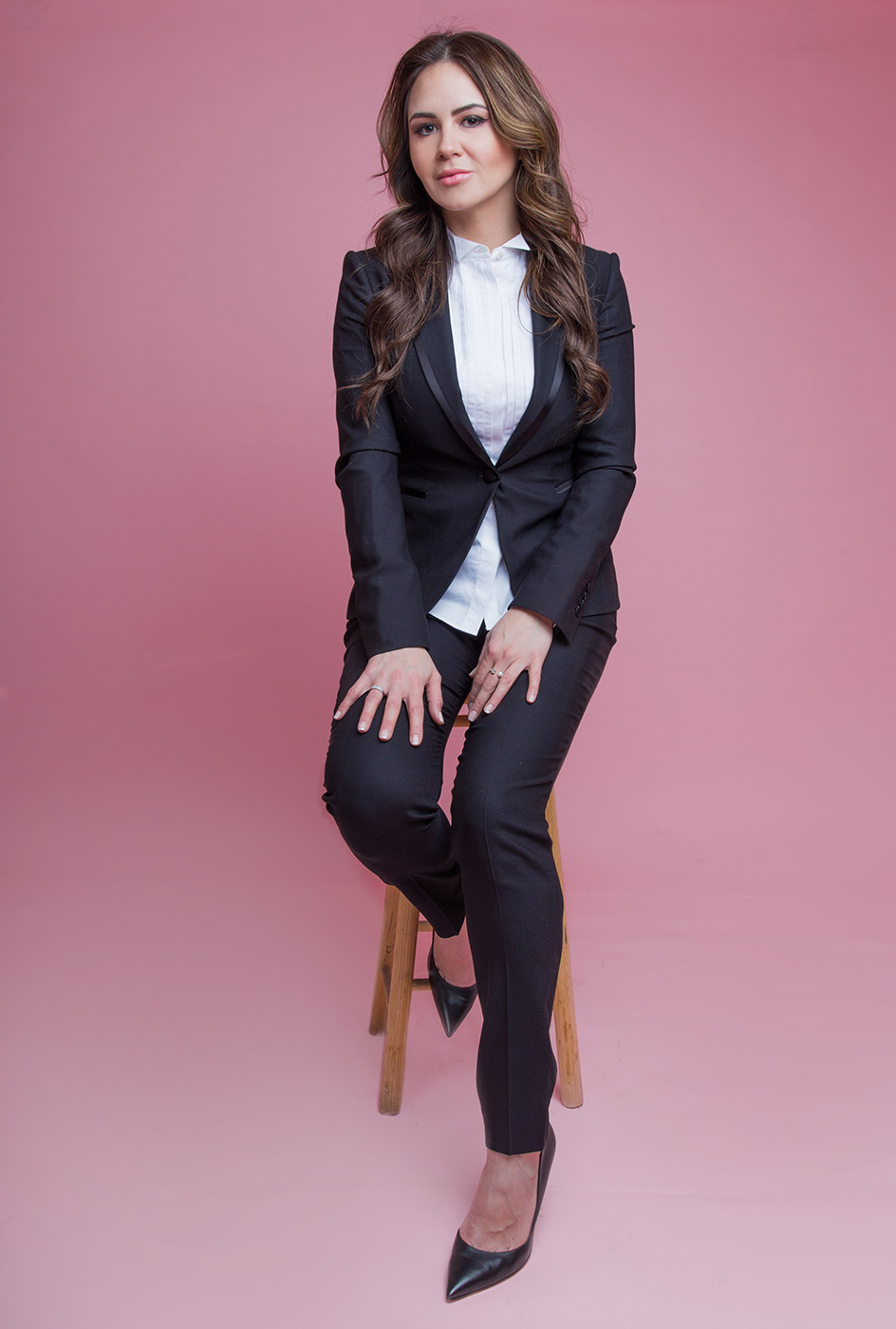 Among her many expeditions to different mountain ranges, Viridiana has been fortunate enough to travel to many worldwide locations, including Nepal, Pakistan, and China.

She makes it a mission to share her learnings, journey, and inspiration she’s gained from these travels to those she meets along the way, reinforcing her belief that the only limits we set for ourselves, are the ones in our minds.

She hopes to continue setting the bar high for women and Latin Americans everywhere, encouraging them to pursue their greatest passions.

"The only limits we set for ourselves, are the ones in our minds." 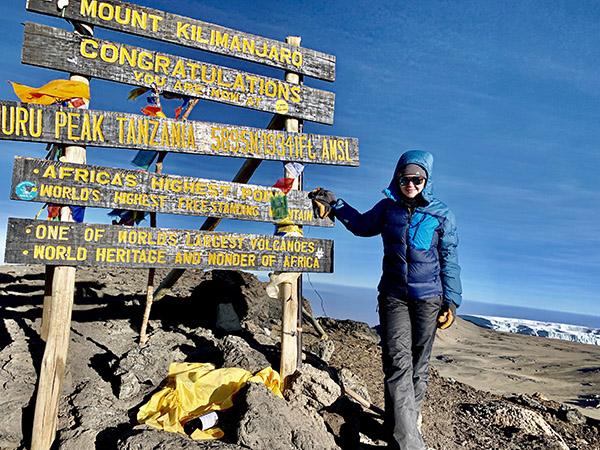 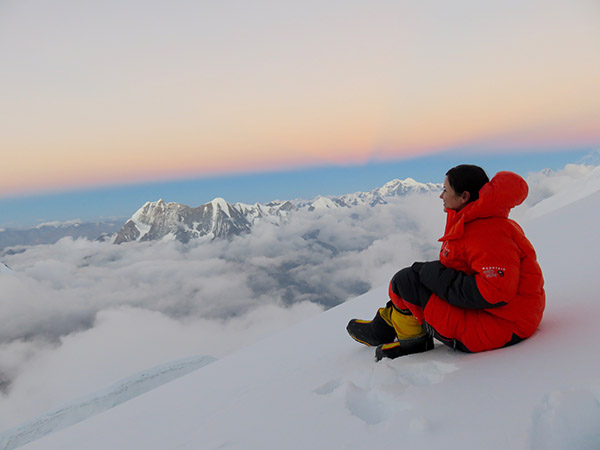 Viridiana Álvarez Chávez appears in Guinness World Records 2022, out now in shops and on Amazon. 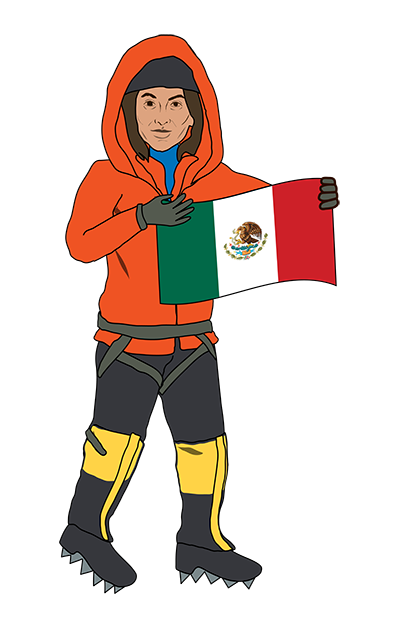