In 2009, Sultan Kösen became the first man over 8 ft to be measured by Guinness World Records for more than 20 years.

In fact, Guinness World Records only knows of ten confirmed or reliable cases in history reaching 8 ft or more.

The part-time farmer from Turkey was found to be a towering 246.5 cm (8 ft 1 in) in height and he took the iconic title of Tallest living man.

Sultan was born on 10 December 1982, but he didn’t start his incredible growth spurt until he was 10 years old.

The rest of his family, including his parents and four siblings, are all average size.

Sultan's unique growth and massive height is caused by a condition known as "pituitary gigantism", which is the result of an over-production of growth hormone.

Growth hormone is released from the pituitary gland in the brain; if the gland is damaged by a tumour, for example, it can release too much (or too little) hormone. The effects of over-production include large hands, a thickening of the bones and painful joints.

Due to his extreme size, Sultan was never able to finish school and instead began working as a farmer to support his family.

He previously described one of the advantages of being tall as being able to help his mum out with jobs such as changing a broken light bulb and hanging curtains.

As for the disadvantages to his height, he complained about not being able to find clothes or shoes that fit and finding it extremely hard to fit into a regular-size car.

As a teenager, Sultan was signed to the Galatasaray basketball team, but unfortunately he was too tall to play. However, he remains a fan of the sport to this day. 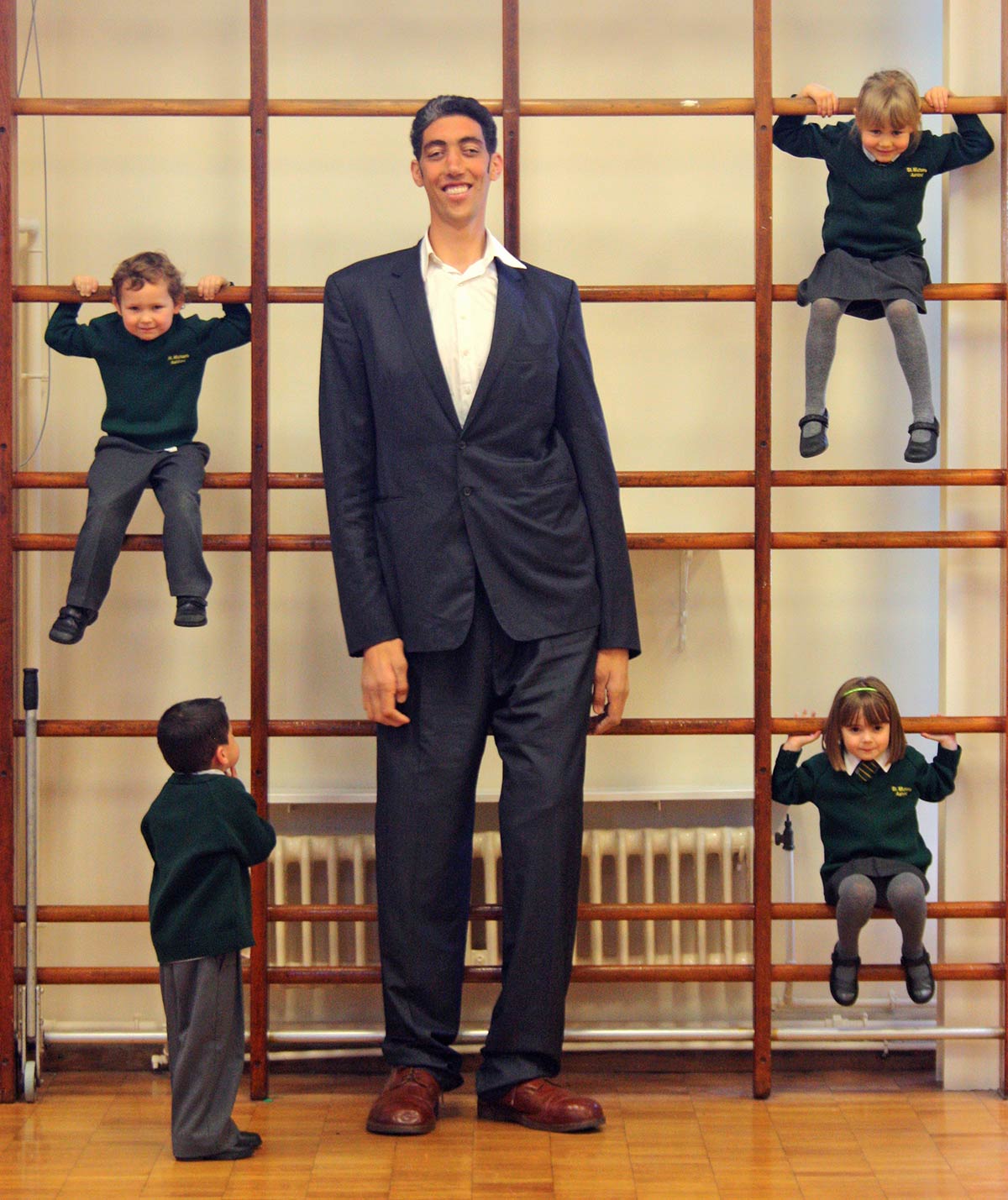 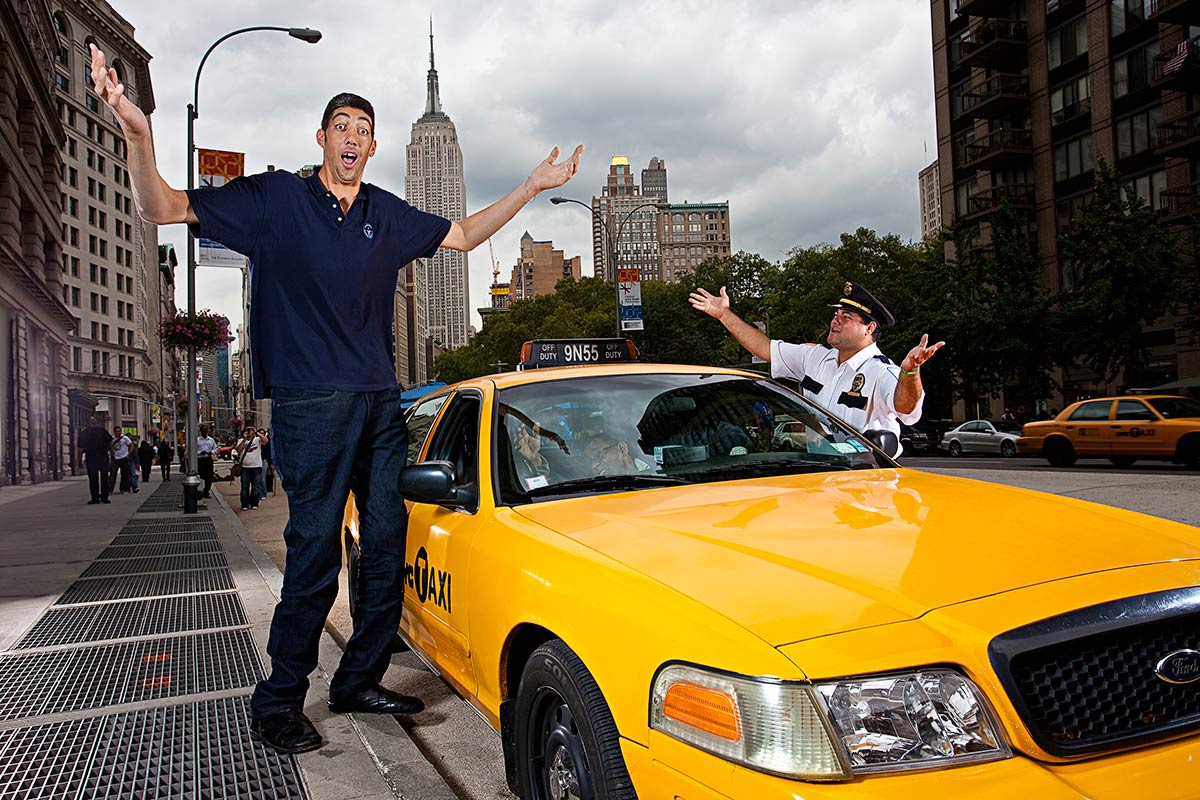 Speaking at the time of his entry into the Guinness World Records family, Sultan said: "I never imagined I would be in the book, I dreamed about it, but it was still a huge surprise."

Sultan also holds the record for largest hands on a living person, each one measuring 28.5 cm (11.22 in) from the wrist to the tip of the middle finger.

During his first ever visit to London, UK, in September 2009, Sultan expressed hope that his newfound fame would change his life, and help him find a wife: "It’s really difficult to find a girlfriend. They are usually scared of me. Hopefully now that I'm famous I'll be able to meet lots of girls. My dream is to be married."

"I want what everyone else wants. A wife, a family, a nice home," said Sultan. "I'd also like the chance to find some decent clothes that fit! I've already had a suit made for me, and at least one dream has come true: I now own a pair of jeans made especially for me!" 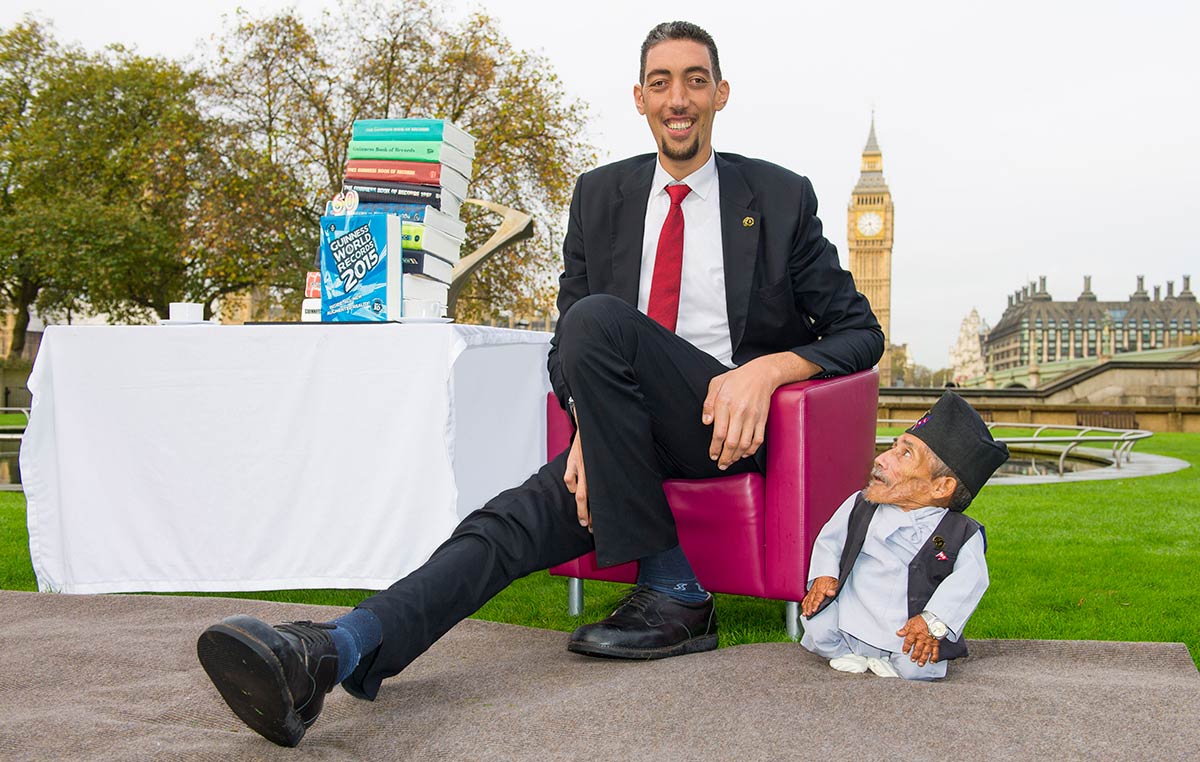 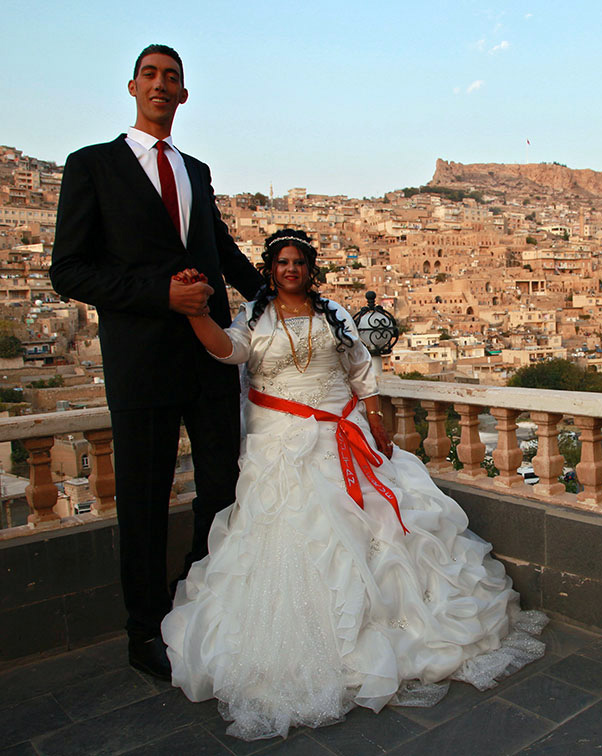 In the years that followed, the giant’s life did change – the exposure his record-breaking stature received saw him benefit from free life-saving surgery to stop his exponential growth. He also enjoyed specially tailored clothing and the opportunity to travel the world.

Revolutionary gamma-knife surgery on the tumour affecting his pituitary gland, provided by the University of Virginia, USA, in August 2010, finally halted Sultan's production of growth hormone and stopped him from getting any taller.

Then, in October 2013, he finally fulfilled his dream of getting married.

Sultan and Merve Dibo, who is nine years his junior and just 5 ft 9 in (1.75 metres) tall, met through a mutual friend.

Merve travelled from her home of Hasaki, in Syria, to his village Dede köy in Turkey to meet him. They were married two months later.

The couple enjoyed a full wedding party after the ceremony, with over 1,500 guests, including a representative from Guinness World Records and local dignitaries.

After the wedding, the happy couple headed back to their specially designed home in Dede köy, where they hope to bring up children in the future.

What is he doing now?

Sultan Kösen’s name is now recognised everywhere around the globe and he has become famous for his extraordinary height.

Since receiving the vital medical treatment he needed to stop his growth, Sultan has been invited to star in a number of Hollywood movies. In 2016, he accepted his debut film role in Achieving the Impossible.

"I made up my mind finally when the screenwriter came to visit me in Mardin, we talked there and I do like the subject of achieving the impossible," he told the Daily Mail.

He spent much of 2016 touring the Indian Ocean with the Magic Circus of Samoa.

In the past eight years since Sultan became a Guinness World Records title holder, he has accomplished so many of the dreams he talked about in 2009. He received the life-saving medical treatment that stopped him growing any further, swapped the farm for Hollywood and found love. The story of the world’s tallest man continues to inspire people all over the globe.