American explorers Conrad Anker, Jimmy Chin and Renan Ozturk first attempted to climb India’s legendary Meru Peak via the Shark's Fin as a group back in 2008, but stormy weather conditions forced them to divert their course just 100 metres (328 ft) from the top of the intimidating 21,000 ft (6,400 m) summit.

They weren’t the first team of alpinists to be beaten by the Himalayas' most technically challenging and dangerous mountain peak, but two years later the determined mountaineers returned to conquer it and successfully achieved the world's First ascent of the Shark's Fin route, Meru Peak.

Speaking to Guinness World Records in a recent interview, Conrad explained: "The central pillar of Meru, the Shark's Fin, was unclimbed when we tried the peak. Combine this with the aesthetic nature of the line and it was an obvious attraction for us."

The group had already known each other for a long time prior to this historic expedition, with Conrad and Jimmy embarking on a climbing trip together as early as 2001. Conrad met Renan in 2005 and they took on their first mountain in Nepal.

Renan was involved in a serious skiing accident in 2011 that left him with a broken spine and fractured head, but it was important to the three men to go back and conquer the summit together – and they did, less than 12 months later. 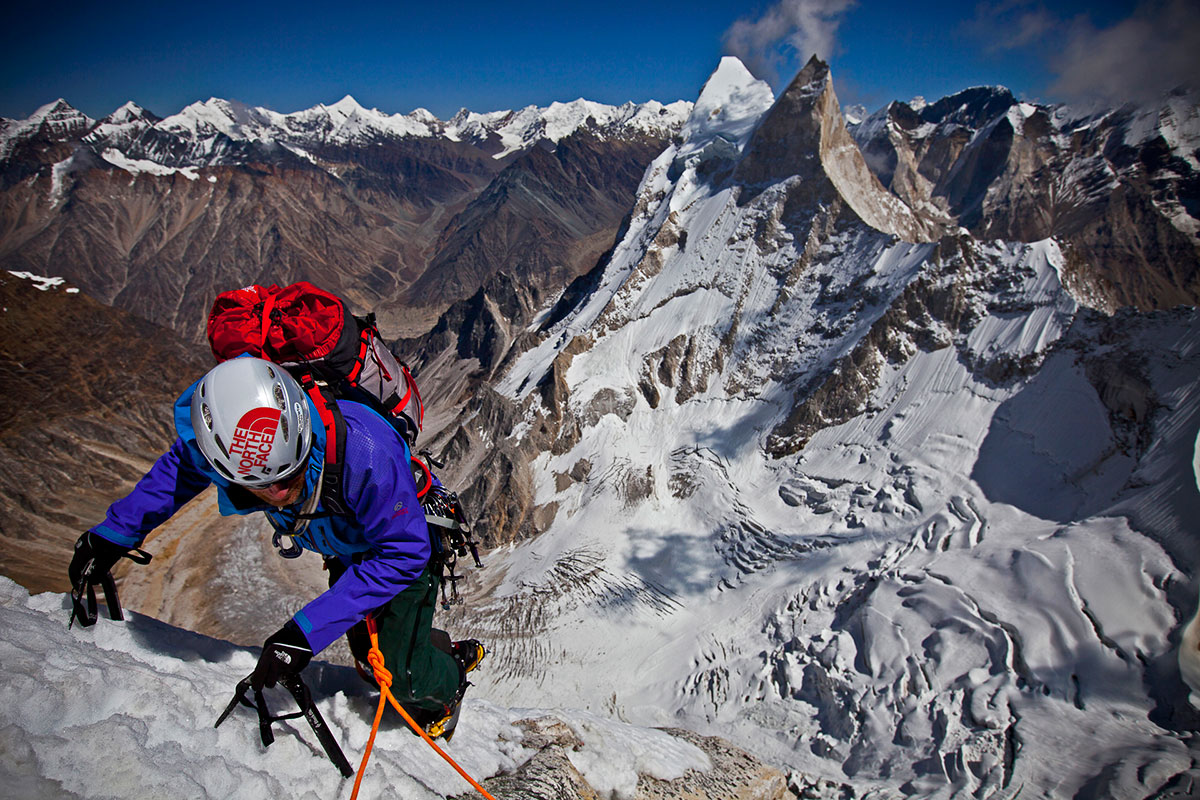 Considered the centre of the universe in Buddhist mythology, as well as in Hindu and Jainist thought, the Shark’s Fin is the steepest and most demanding line to take up the Meru Peak.

It took the trio 12 days of gruelling climbing to finally get there safely.

"The hardest moment was when the portaledge [hanging tent] snapped and we were struck by falling ice. We were not certain we would make it to the summit," Conrad said.

The team had only each other for support during the trek, carrying their own gear and taking it in turns to “lead the pitches” – the leader ascends a section of the peak, places the gear down and then stops to anchor himself to the mountain rock in order to protect the other climbers from falling.

The team had a friend called Chris Fiegenshaw waiting for them at base camp with a radio in case anything went wrong.

Now that Conrad, Jimmy and Renan have become the first people in the world to ascend the Shark’s Fin, they hope that others will follow in their footsteps.

However, "it might be 20 years before the second ascent of the Shark's Fin route. It generally takes a generation before the next party wants to try the route," Conrad says.

A documentary called Meru, filmed by the three explorers during their expedition and directed by Jimmy, was released in 2015 at the Sundance Film Festival.