The dysfunctional nuclear family from Springfield has played a central - and highly influential - role in popular culture for over three decades. After a record-breaking 31 seasons and 684 episodes, it continues to hold up a mirror to American society and reflect back a distorted, satirical and, most importantly, hilarious view of the world today.

The Simpsons family sprang into life on 19 Apr 1987, when Homer, Marge, Bart, Lisa and Maggie debuted in a series of animated “bumpers” on The Tracey Ullman Show – a sketch show fronted by the British singer and comedienne on the US Fox network and produced by James L Brooks of Gracie Films. The 60-second shorts – aired on either side of commercial breaks – were devised and drawn by the comic artist Matt Groening, best known at the time for his Life Is Hell comic strips.

Groening wanted to create a new cast of characters for these short segments so he conjured up a typical American family inspired by his own. He quickly drew the Simpsons – almost as we know them today – expecting the TV execs to have his hastily drawn sketches polished and smoothed out; instead, they were animated just as he’d drawn them, giving the early Simpsons featurettes a rough, shaky quality that may well have added to their quirky appeal. 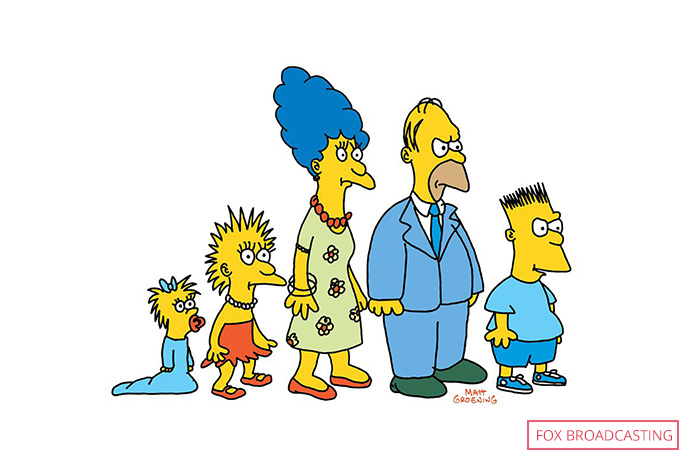 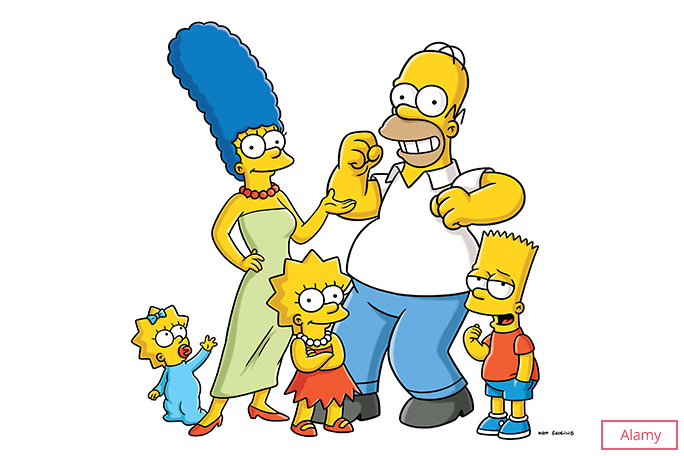 If you watch that first ever segment – “Good Night”, aired on 19 Apr 1987 – you’ll hear the line-up of actors who continue to voice the characters to this day: Dan Castellaneta (Homer), Julie Kavner (Marge), Nancy Cartwright (Bart) and Yeardley Smith (Lisa). Castellaneta and Kavner were regulars on The Tracey Ullman Show; Cartwright originally auditioned to play Lisa, and Smith was expecting to play Bart but the roles were reversed, as the producers deemed Smith’s voice too feminine to play the naughty schoolboy role. (See below: Who Does the Talking?) 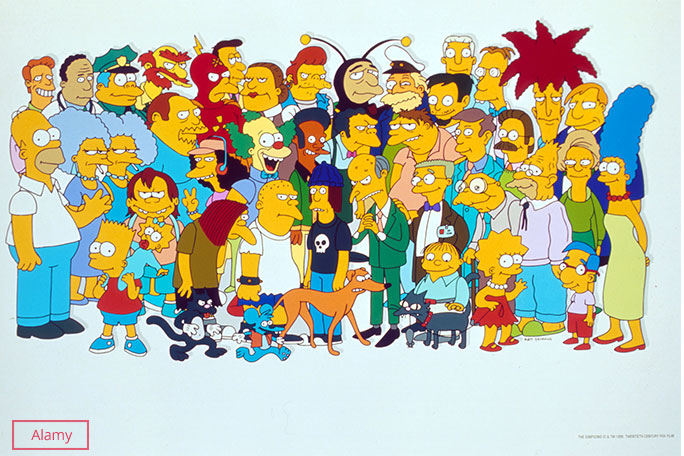 With this winning combination of cast and creatives on board, The Simpsons shorts proved to be a hit – or at least enough of a hit to convince Fox TV executives to give the show runners (Groening, Brooks and co-creator Sam Simon) the chance to create a series of half-hour episodes. The first of these to air was “Simpsons Roasting on an Open Fire”, broadcast on 17 Dec 1989 as a Christmas special. It earned the show its first Primetime Emmy Award nomination, and while it didn’t win, the 13-episode first season went on to secure an Outstanding Animated Program award for “Life on the Fast Lane” (S1, E9) – the first of The Simpsons’ 34 Primetime Emmy Awards.

The Simpsons has gone on to win the most Emmy Awards won for an animated TV series, with the most recent accolade being once again for Outstanding Animated Program (“Mad About the Toy”) at the 71st Primetime Creative Arts Emmy Awards in 2019.

The haul of trophies comprises:

As well as winning awards, the show has also earned itself a raft of celebrity fans along its 31-year life, securing the record for the most guest stars featured in an animated series. As of 22 Apr 2020, at least 810 famous names have made cameo appearances. The first celebrity named as a guest was the late US actress Marcia Wallace – who played Springfield Elementary school teacher Edna Krabappel – and the first to appear as himself was American crooner Tony Bennett. 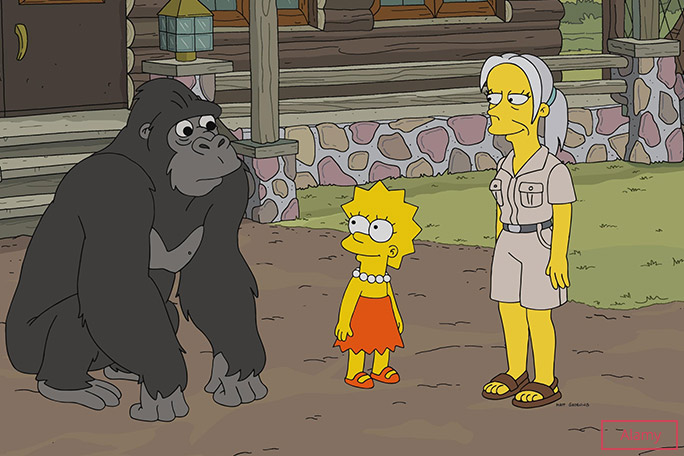 I don’t care about awards but to be in the Guinness World Records book is really great. It’s something I’d never expected, and I’m glad it’s a record to be proud of. There are certain records you don’t want to have… I’m glad I’ve not been sitting in baked beans! - Matt Groening, co-creator of The Simpsons

The show has inspired record-breaking across a wide range of categories, from tattoos to collections: 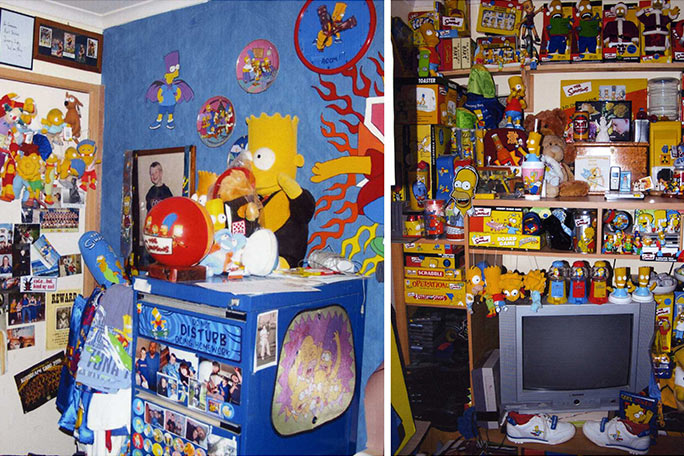 ● The largest collection of The Simpsons memorabilia belongs to Cameron Gibbs of Skye, Victoria, Australia, who owned 2,580 different items as of 20 Mar 2008.

● The Simpsons is the most liked TV show on Facebook, with 62 million likes as of Aug 2020; in second place was SpongeBob SquarePants with 51 million likes.

● In 2011, the record for most downloaded sat-nav voice was awarded to Homer Simpson, voiced by Dan Castellaneta, which had been downloaded for Tom Tom systems 128,500 times since 2009.

● The longest uninterrupted broadcast of a TV franchise is 300 hr, achieved by FXX (USA), who broadcast 600 episodes of The Simpsons across the USA between 24 Nov and 6 Dec 2016.

● In 2012, Carin Shreeves and Jeremiah Franco (both USA) broke the record for the longest marathon watching television with an epic 86-hr 37-min viewing of The Simpsons from Episode One; the four-day "Simpsonsathon" earned the two men a GWR certificate plus $10,000 prize money presented by Fox Home Entertainment.

● The most tattoos of characters from a single animated series is 203 different characters from The Simpsons, achieved by super-fan Michael Baxter (AUS), as verified in Bacchus Marsh, Victoria, Australia, on 3 Dec 2014.

"The Duff Book of Records"

World records set in the fictional universe of The Simpsons are documented in The Duff Book of Records – a publication created by Duff Beer in order to settle pub arguments. Sound familiar?! The book also has a spin-off TV series of the same name, hosted by Johnny Herelately. Records featured in the book and TV show include "most lima beans shoved up the nose" (183, attempted by Ralph Wiggum), the "most people bouncing paddle balls" (attempted by everyone in Springfield), "most trampoline bounces" (by Homer), "fattest town" (Springfield), "best book you have ever seen" (Tom Clancy's Op-Center) and "most clothespins clipped to face and neck" (116). Duff also organizes the Duff Ultimate Eating Challenge.

FUN FACT: Bart Simpson was the only fictional character in TIME magazine's list of the “100 Most Important People of the 20th Century”, alongside the likes of Albert Einstein, Mahatma Gandhi and The Beatles!

When the scripts for every episode of The Simpsons were made available online, data scientists were able to analyse 30 years – and 600 episodes – of dialogue. Here, we list the series' top ten talkers: the characters who speak the most lines* 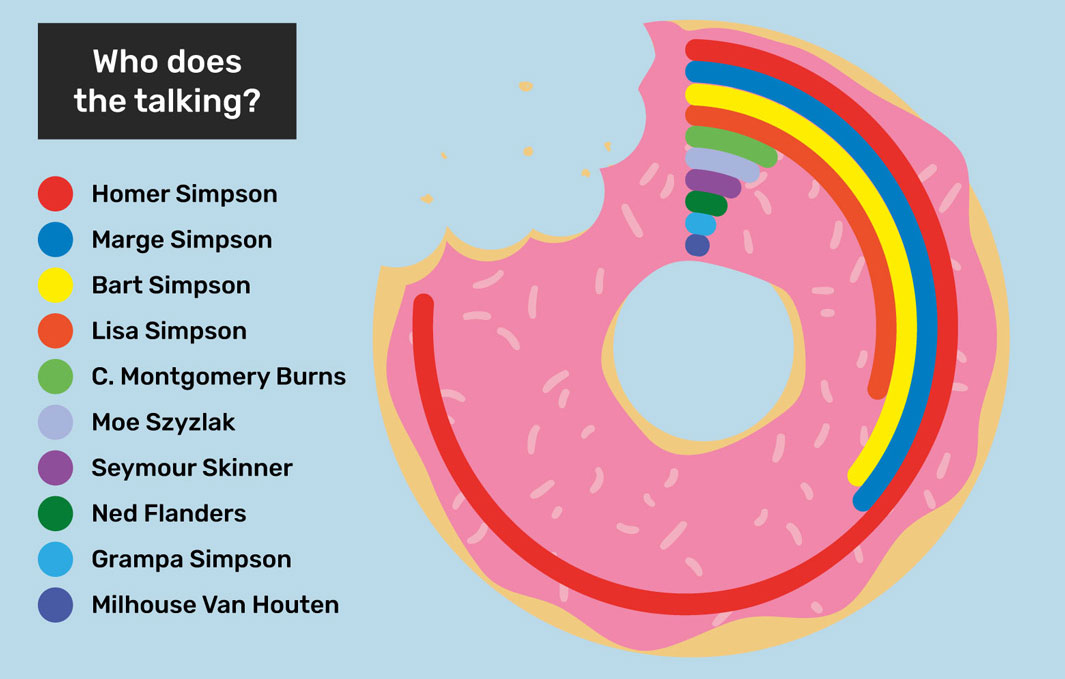 *Based on data extracted up to the end of Season 27

The man behind Springfield's first family

Matthew Abraham Groening (pronounced GREY-ning) was born in Portland, Oregon, USA, to mother Margaret Wiggum and father Homer Philip Groening; he was later joined by sisters, Lisa and Maggie. (Are these names all sounding rather familiar?!) At school, Groening showed talent as a cartoonist, and at college provided comic sketches for the campus magazine. He went on to create the syndicated comic strip, Life is Hell, and it was this that caught the attention of TV producer Albert L Brooks, who would go on to commission Groening to create an animated segment for The Tracey Ullman Show.

In 1997, Groening and The Simpsons’ co-writer David X Cohen created Futurama, which in 2010 was awarded a Guinness World Records certificate for highest rated sci-fi animation on TV (with an average Metacritic review score of 80/100 for its seventh season). He also went on to devise the Netflix series Disenchantment in 2018. On 14 Feb 2012, Groening was recognized with a star on the prestigious Hollywood Walk of Fame. 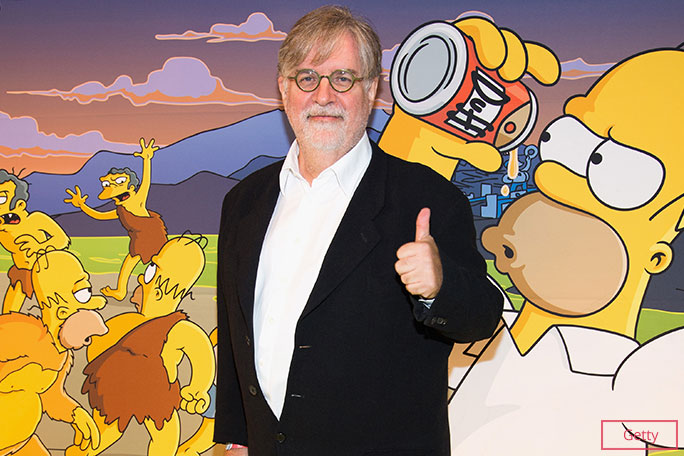 As part of the 50th anniversary edition of Guinness World Records, we spoke to The Simpsons’ co-creator Matt Groening about this much-loved TV phenomenon. We started by congratulating him on the show’s record-breaking success.

MG: Thank you! It really is an unexpected thrill. I don’t care about awards but to be in the Guinness World Records book is really great. It’s something I’d never expected, and I’m glad it’s a record to be proud of. There are certain records you don’t want to have… I’m glad I’ve not been sitting in baked beans!

GWR: The show also has a record for its many guest stars. Why are celebrities so keen to appear?

MG: Firstly, it’s the easiest gig in showbusiness! You can show up in curlers and barefoot, speak into the microphone and be on your merry way. You can literally phone it in – we’ve done phone hook-ups with some big stars. But it’s more fun when we convince the stars to come in. When Mick Jagger was at the FOX studios, people on the show were very excited. That’s why we do it – to entertain ourselves! We’ve had Michael Jackson as a 300-lb white guy who thought he was Michael Jackson; we’ve had Elizabeth Taylor doing the voice of Maggie; Paul McCartney, George Harrison and Ringo Starr [from The Beatles]. But of all the people, I think The Simpsons' writing team was most excited to have Adam West, the original TV Batman!

GWR: What advice do you have for kids who want to work in TV?

MG: My advice to kids who want to work in TV is don’t spend all your time watching TV! One of the things about working in TV is that it’s like a voracious beast… you need to keep filling it with content. So cram your brain full of culture, history, science and politics, and you’ll do very well in TV.

GWR: Do you have a favourite episode?

MG: Ah, I like a lot of the very early episodes, particularly ones with Lisa. When Lisa first meets Bleeding Gums Murphy, her saxophone mentor, I was amazed that the show could actually be moving, given how garish the characters were drawn.

GWR: Bart and co. have been on our screens since 1987, will they continue to be part of the pop-culture landscape 20 years from now?

MG: Aaah, I hope so! I don’t see any end in sight. It doesn’t get easier to come up with new stories, but we continue to surprise ourselves. And that’s basically our goal – to keep things surprising. It gets harder as the decades toll by. Everybody who likes the show compares the latest episode to their favourite, and it’s hard to measure up to the past sometimes. But we’re trying!

The Simpsons appear in Guinness World Records 2021, out now in shops and on Amazon.