Turkey's very own Rumeysa Gelgi, the tallest woman living, needs no introduction: she is a star, an activist, a public speaker and the holder of the staggering number of five Guinness World Records titles.

In 2021, she received her qualification as a front-end web developer.

In her free time, Rumeysa is a passionate swimmer and avid consumer of crime novels. Get to know one of the stars of Guinness World Records 2023.

Now 24 years old, Rumeysa was born in Turkey and is the former tallest teenager living, as confirmed in 2014.

She broke the record for the tallest woman living after she turned eighteen, and racked up four more records in October 2021.

Her most recent measurement confirmed that she stands at a towering 215.16 cm (7ft 0.7in), and her popularity has reached dizzying heights all over the world.

Upon birth, she immediately showed the signs of Weaver Syndrome: a rare genetic mutation that would accompany her all her life.

Her condition was diagnosed at the Hacettepe University, Pediatric Endocrinology Clinic after, at birth, Rumeysa displayed an unusually large size for a newborn.

Although no other member of Rumeysa's family has showed signs of Weaver Syndrome, they are all extremely proud and supportive of Rumeysa's accomplishments. They encourage her to reach her goals, and Rumeysa enjoys spending time with them and going out for nice meals with her family.

Her playful side comes out whenever she plays with her beloved niece Zeynep, too, and she adores spending time with her family and siblings.

Although Rumeysa's childhood - peppered with surgeries, physiotherapy and a complicated medical history - was everything but easy, her family stayed by her side through it all.

But who is Rumeysa Gelgi, the tallest woman in the world?

She is an advocate, a passionate researcher and a public speaker.
She’s an avid reader of crime novels.
She is, first and foremost, a young woman that, with courage and a continuous effort, raised her voice to speak about a condition so rare that she represents the first Weaver Syndrome case ever recorded in Turkey.

Worldwide, she is the 27th overall case in history.
At the moment, her medical condition is stable and she adds regular swimming sessions to strengthen her muscles on top of physiotherapy.
She graduated high school in 2016, although her education process has been unusual due to her peculiar condition. 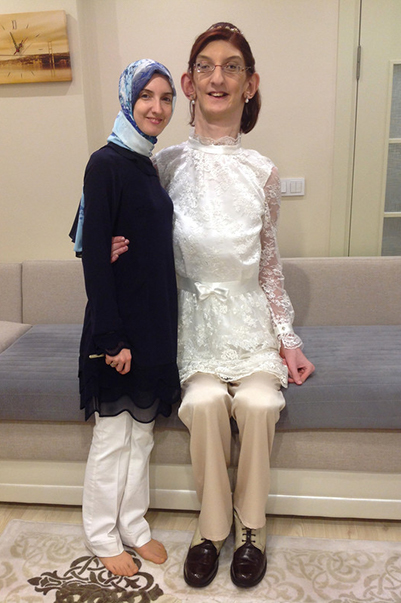 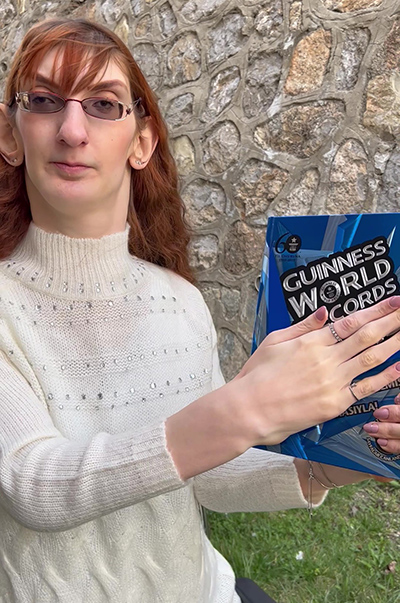 “I've never been to school in person but completed my education via homeschooling,” she writes on her website.

“During the COVID-19 quarantines in 2020, I started studying Web Development since working in Tech industry was my childhood dream.”

“Now I'm an aspiring self-taught front-end developer who has two professional certifications from two different global institutes.”
In her free time, Rumeysa is a curious young adult who loves sightseeing and exploring new places.
When she’s not being a voice of body positivity or working in Tech, she likes to spend time with her family and her siblings, and her hobbies include shopping and swimming.

“Medical treatment has been successful and I'm not growing anymore.”

What is Weaver Syndrome?

A large part of Rumeysa’s life is dedicated to growing awareness around the condition that causes her remarkable height: the Weaver Syndrome (also called WS).

This rare genetic condition is often of hereditary nature and caused by mutations and malfunctioning in the EZH2 gene - which controls many aspects of the correct functionality of other genes, explaining why Weaver Syndrom impacts several areas of the body.

One of they most immediate causes are accelerated growth and remarkably advanced bone age.

The syndrome can often be spotted at a prenatal stage and entails large birth size, accelerated growth and skeletal maturation and, although other issues may arise with this condition, it is often primarily associated with limb and neurological abnormalities.

Due to this limited mobility Rumeysa often uses a wheelchair, and sometimes relies on the aid of a walker. These precautions allow her to walk safely and move as she pleases.

No other member of Rumeysa's family has presented signs of Weaver Syndrome, and her parents and siblings are of average height.

In the first years of her life, Rumeysa suffered from ill health and grew at an accelerated rhythm, soon becoming taller than the average toddler. She also had bigger hands and feet.

“When I was one year old, I had open heart surgery due to ASD+PDA problems from birth,” she writes on her website.

She also suffered from umbilical hernia and spinal deformity, and had surgery for both of them during her childhood.

Her skeletal structure and maturation – the ageing of her bones, in other words – developed abnormally, and her bones and muscles appeared weaker than normal.

She was also born with Scoliosis, a disease that causes a sideways curvature of the spine.

“After 9 months of physiotherapy at 5 years old, I was able to walk for the first time with a walker.”

From tallest teenager to tallest woman

Rumeysa’s unusual height started getting attention in 2014, when she became the world's tallest teenager (female).

Rumeysa received the title during a presentation in her hometown Safranbolu, Karabük, in Turkey, surrounded by the love and cheering of her family.

“It’s one of my biggest dreams to be awarded with this record,” she said.

“Being a record-holder is a very amazing thing. I know that only the special people can make it and I know I’m one of them now.”

On May 2021, Rumeysa was measured again.

This time, the web designer was found standing at a jaw-dropping 215.16 cm and collected another record  - this time, as the world's tallest woman.

Ever since her first recognition the now web-developer continuously used her mediatic attention and platforms to spread awareness on the lights and shadows of her very rare, sometimes challenging condition.

This new record allowed her to reinforce that positive message, welcoming her again in a plethora of iconic record holders.

However, Rumeysa's astonishing stature didn't only allow her to make headlines by breaking two world records. In total, she would go on to rack up a total of five Guinness World Records titles.

According to the American scientific magazine Healthline, the average length of a hand for a female individual is 17.27 cm (6.8 in).

This is measured from the tip of the finger to the crease under the palm.

Sadly, Rumeysa's unique stature can cause some issues: she has bespoke orthopaedical shoes made, can only walk with the aid of a walker for short periods of time, and her height causes her some health issues to this day.

Although she was homeschooled, Rumeysa also reports that she was bullied during her childhood due to her height.

Her condition doesn't make her life easy, but she says it makes her feel special.

However, she also recalls that she understood that those comments often stem from ignorance.

Therefore, ever since achieving her first record Rumeysa has taken upon herself to educate people and spread awareness on her condition, becoming an advocate for positivity, diversity and research.

"Be aware of your potential," she says. 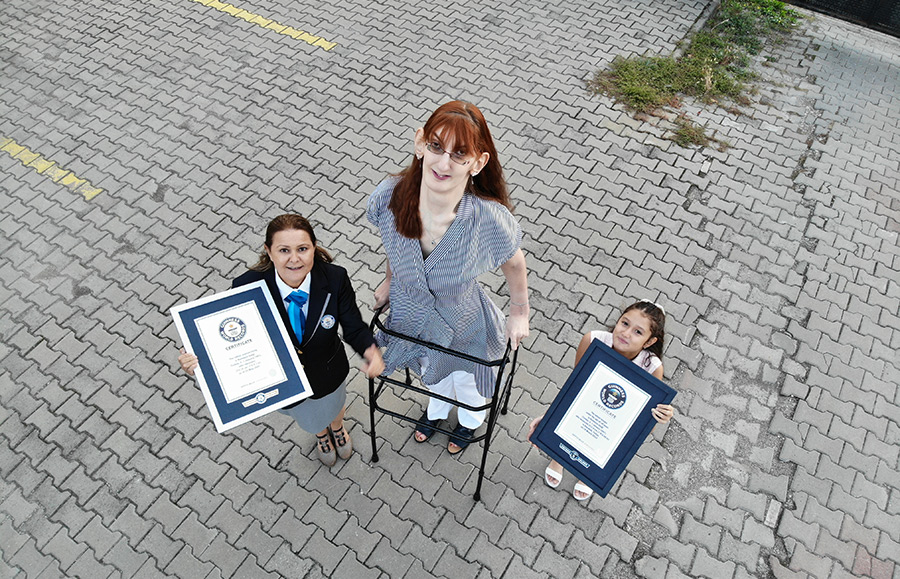 Two years later he was measured again in Ankara, Turkey, and confirmed his record with a towering 251 cm (8 ft 2.8 in).

He has has hold the record ever since.

Interestingly, both Sultan and Rumeysa are from Turkey. Although they never had a chance to meet, they would like to do so in the future.

Find all about Sultan. 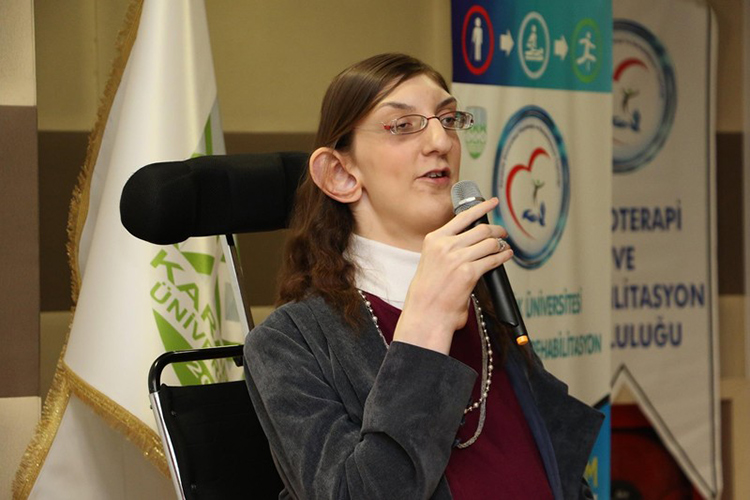 A voice for positivity

Thanks to her condition and the buzz created by her records, Rumeysa used her platform and fame to convey the issues and challenges of her rare medical condition.

She speaks online and appeared on TV to educate others through her unique experience, and speaks openly about the good and bad sides of her height.

In an era where the general audience is often distracted, constantly bombarded with information, and social media promote shallow, fleeting, sometimes unachievable standards, Rumeysa became a powerful voice and spoke up about her rare condition with continuous optimism and a sharp analytical eye.

“Living with some severe diagnoses for my lifetime inspired me to raise awareness, help to get treatment options further and empower other individuals who are in similar situations.” 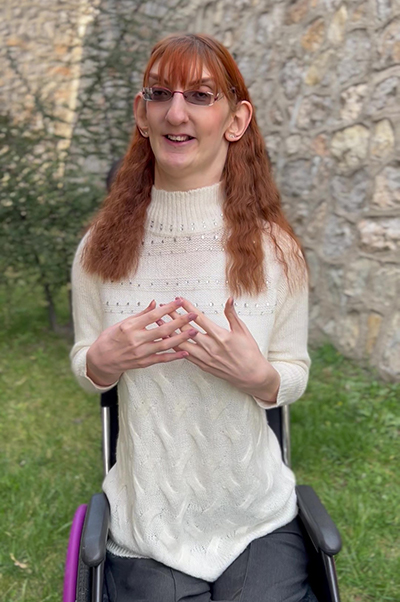 Getting several record titles became part of her journey and helped her pursue her dreams.

She never shies away from sharing her experience and is glad to empower people using her knowledge.

"I was born with extreme physical uniqueness," Rumeysa writes on her Instagram, "and wanted to have as much of them recognized and celebrated as possible, hoping to inspire and encourage others with visible differences to do the same thing and be themselves."

"It motivated me to pursue my goals and have a more confident outlook in life."

She also took part in several campaigns online and in print.

She actively advocates for Weaver Syndrome and Scoliosis, and is vocal about the challenges, but also opportunities, of her condition.

"I like being different from everyone else," she says today.

"Every disadvantage can be turned into an advantage for yourself, so accept yourself for who you are, be aware of your potential and do your best."

"It's an honour to welcome Rumeysa back into the record books. Her indomitable spirit and pride at standing out from the crowd is an inspiration. The category of tallest living woman is not one that changes hands very often, so I'm excited to share this news with the world."

With his incredible 272 cm (8 ft 11.1 in) Robert Pershing Wadlow (USA) is widely known to be the tallest person who ever lived.

It’s likely that he will forever remain the tallest person ever.
Taller than a grizzly bear when standing on its legs, Robert lived an incredible life and became a celebrity.

Why no one will (likely) break his record

It is beyond doubt that Rumeysa is an incredible person and an inspiration.

She turns heads wherever she goes, and continues to strive to achieve her goals.

However, she also keeps on being an important voice for self-acceptance and positivity, as well as gifting her precious personal experience to the scientific community.

The X-rays pictures of her back appeared in the 2018 #IAmStraigthForward photo exhibition in New York, showing how scoliosis had impacted and curved her spine. 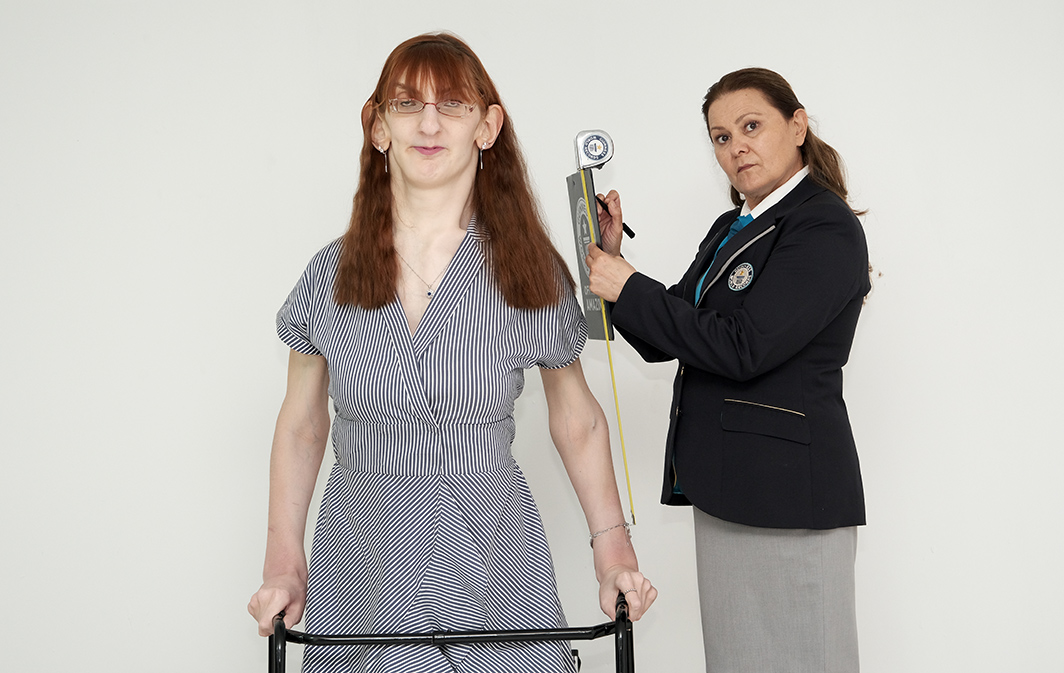 Find all those facts, pictures from the exhibition and much more about Rumeysa's incredible life and records in the newest edition of Guinness World Records, available in store and online from September 2022.