Mount Everest in the Himalayas is our planet's highest mountain, and for many it epitomizes the greatest challenge Earth has to offer... Climbing it is the crowning achievement of many a mountaineer's life - but for two Nepalis who grew up in the shadow of Sagarmāthā, once just wasn't enough...

The prospect of reaching the top of the world’s highest mountain has enticed thousands of people on to its slopes. Indeed, this iconic natural landmark, soaring to 8,848 m (29,029 ft) above sea level, was the very first record to appear in the inaugural edition of the Guinness World Records book, published in 1955. It's worth stressing that there is a key distinction to be made between the highest and tallest mountains, however; the tallest mountain (most of which lies under the sea) is the 10,205-m (33,480-ft) Mauna Kea in Hawaii, USA (see graphic below).

Climbing Everest is as much a test of mental strength and endurance as of physical stamina. How much more demanding, therefore, must it be to return and climb it again? And again. And again… Two who know better than most are Kami Rita Sherpa and Lhakpa Sherpa, who respectively hold the male and female record for most ascents of Everest.

When Kami Rita Sherpa (NPL), aka "Thapke", topped this prodigious peak on 21 May 2019, it was his 24th summit – the most ascents of Everest by any individual overall. Even more remarkably, he’d made his 23rd climb just six days earlier. And he sees no reason to stop now. In fact, he’s confident that he can keep climbing for another decade or so (he turns 50 this year).

Kami Rita’s inspiration was his father. In 1950, when Nepal opened its borders to climbers from abroad, he became one of the earliest professional guides for expeditions to the area, although his climbing days were curtailed in 1992 after he suffered severe frostbite. That same year, according to his elder brother, Lakpa, Kami Rita became a cook’s assistant at Everest’s base camp, though reportedly he had been hauling gear there as a porter since the age of 12. In 1994, he made his first successful ascent of the mountain.

I do not have any lucky charms, but I do carry a small Buddhist locket on my neck which is filled with prayers and chants by the lama (Rinpoche)

However, Kami Rita is proof that even the most talented of record-setters don't necessarily get it all their own way from the beginning. "I made my first expedition in 1992, but I did not get the chance to reach the summit because I was just a beginner. It all went as planned, but the sad part was I did not summit on the first attempt. I felt really proud when I made my first summit and returned back to the base [two years later]. It was a happy moment for me as it proved that I was strong and fit enough to do the hard work." 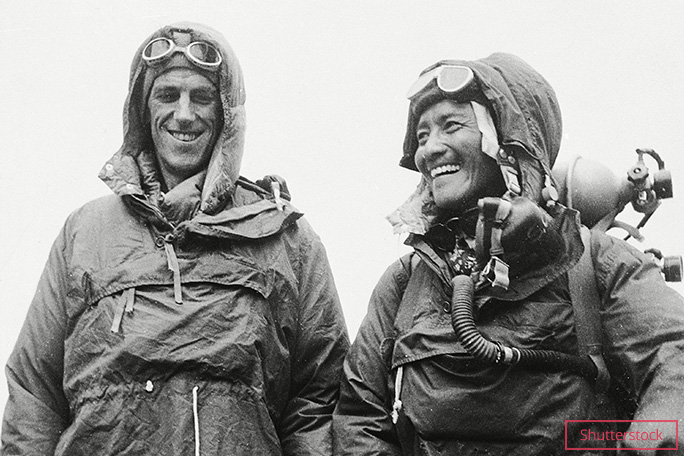 After decades of failed attempts, the first ascent of Everest was made on 29 May 1953, by Edmund Hilary (NZ) and Tenzing Norgay (IND/Tibet); the latter hailed from the same region as Kami Rita’s family. Since then, according to the Himalayan Database, nearly 6,000 people have followed in their footsteps. With the help of experienced guides, it’s become possible for increasing numbers of us to climb this iconic peak, which is located within the lofty Himalayan range on the border between Nepal and China’s Tibet Autonomous Region. A total of 354 climbers did so on 23 May 2019, the most ascents of Everest in one day. 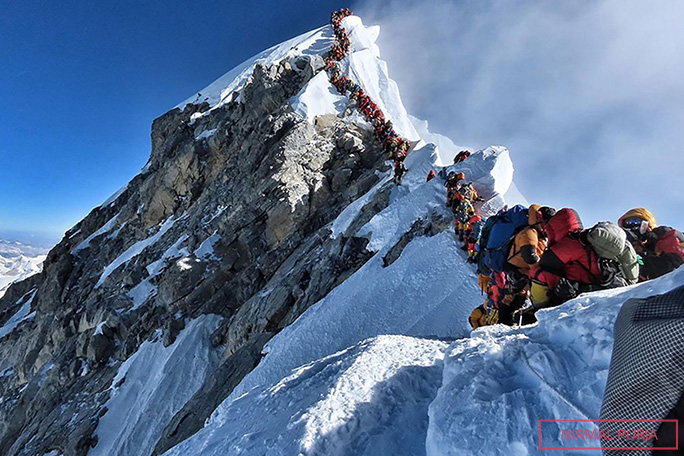 Kami Rita now works as a guide for Seven Summit Treks, helping international clients to achieve their dream of standing on top of the highest peak in the world. Often, a Sherpa will prepare the route that organised expeditions will take, attaching ropes and placing ladders across crevasses, as well as cooking for the groups and carrying supplies (including oxygen bottles). Kami Rita and Lakpa Rita (who is himself a 17-ascent veteran of Everest) come from a village called Thame in the Khumbu region of Nepal, down the valley from Everest. Most of the men from the village work as guides or porters for climbing expeditions. 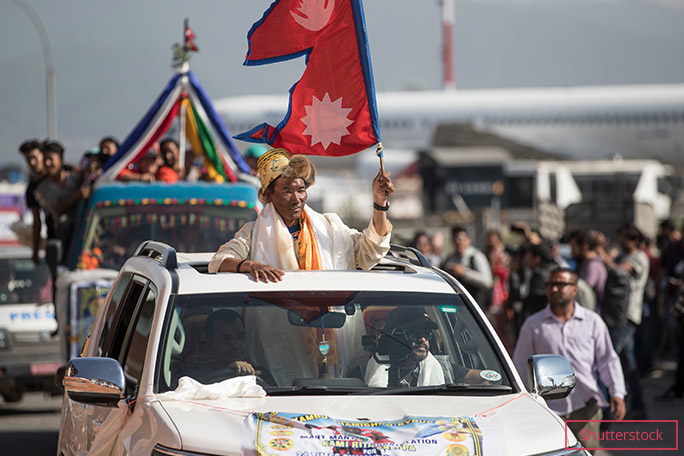 Commercial expeditions on the Himalayan peaks generate much-needed funds for the Sherpa population: climbers may pay up to $90,000 (£70,000) per ascent and benefits the Nepalese economy to the tune of around $4 m (£3 m) per year. “An experienced climbing guide makes as much as $12,000 [£9,400] during [a] 45-day Everest climbing window,” Kami Rita explains.

A sobering reminder of the attendant dangers came on 18 Apr 2014 - what Kami Rita describes as his "worst Everest ascent" to date - when a sudden avalanche near the mountain’s base camp killed 16 Sherpa guides, the most deaths on Everest in one day. Kami Rita and Lapka Rita were among the first on the scene and helped to dig the bodies out of the rubble. 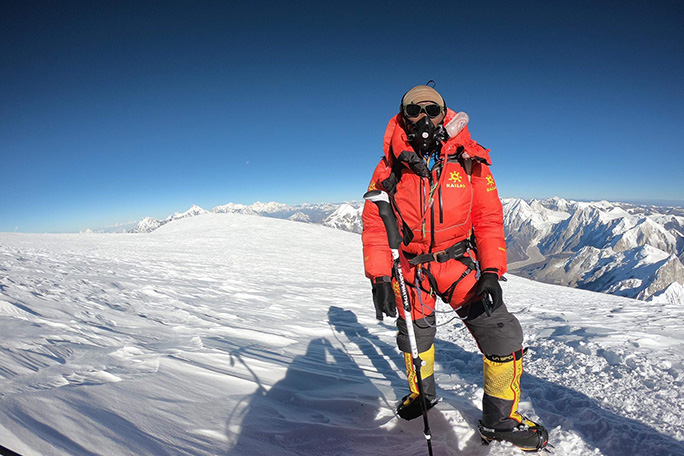 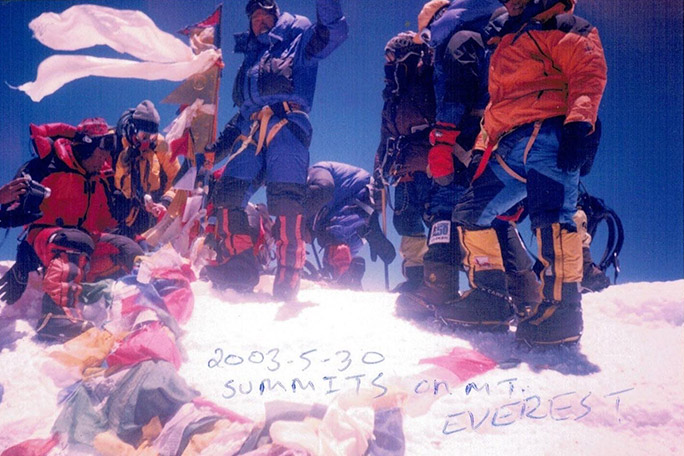 To Kami Rita every mountain houses a goddess. During the months of preparation he puts into each climb, he takes time to pray and asks forgiveness in advance, for placing his feet upon her. “No matter how strong you are, how good you prepare,” he insists, “you have to be blessed by God to reach the top.”

Asked what others think of his heady achievements and knowing the most prolific Everest climber of all time, he told us: "My family and friends are really proud as I am able to help my country by spreading Nepal's name with huge pride."

Since her first summit on 18 May 2000, Lhakpa Sherpa (NPL) has achieved the most ascents of Everest (female) – nine – most recently on 16 May 2018. Climbing is in her blood. She’d grown up living within sight of Everest, and began portering as a 15-year-old, carrying heavy gear between camps in the Himalayas. Twelve years later, she summitted the peak for the first time. 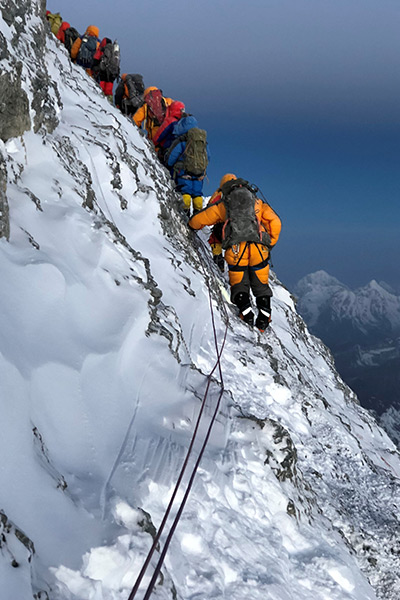 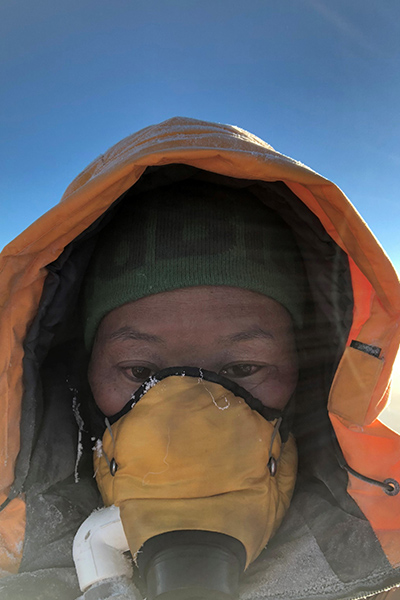 Recent studies have shown that during the 6,000 years that Sherpas have resided on the Himalayan high plateau, their genetic make-up has evolved to allow them to function in the thin atmosphere found at altitudes of 4,000 m (13,100 ft) or higher. Above 8,000 m (26,200 ft), deteriorating oxygen levels can cause dizziness, headaches, breathing problems and hallucinations. It’s little wonder this part of the climb is known as the “death zone”.

Lhakpa’s expeditions usually set off to attempt this perilous stretch at around 10 p.m., hoping to summit around seven hours later; the descent is safer to navigate by daylight. On reaching the peak, they stay there only for 20 minutes or so before beginning the 12-hour trek back to base camp.

Severe instances of such so-called “mountain sickness” are rare among Sherpas, though. Recent studies reveal that the cells within their muscles are more efficient at converting oxygen into energy than those of people who live at lower altitudes. The discovery opens up exciting possibilities for medical research to help those suffering from illnesses that reduce oxygen levels in body tissue, such as cancer and heart disease.

Lhakpa Sherpa’s debut ascent of Everest in 2000 made her the first Nepalese woman to return after topping the mountain, but seven years beforehand, on 22 Apr 1993, another female climber from Nepal had reached its peak too. Tragically, Pasang Lhamu Sherpa died during the descent, the victim of the unforgiving weather conditions on the peak. But in summitting Everest, she became an inspirational figure. Incredibly, since that first ascent by Edmund Hillary and Tenzing Norgay in 1953, no Nepalese woman had scaled the mountain. Junko Tabei from Japan was the first woman to climb Everest, back in 1973. 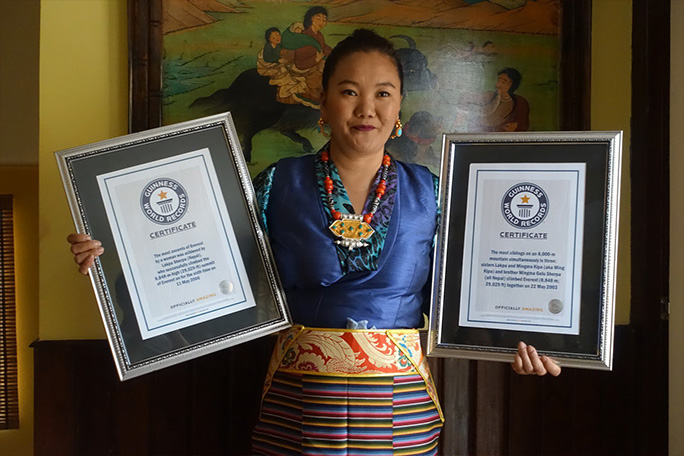 Chhurim Sherpa was only a child when news broke of Pasang Lhamu’s achievement, but the reports madfe a huge impact on her. “I didn’t think a woman was capable of getting there,” she admitted, years later. In 2011, Chhurim became the first woman to climb Everest twice in one season, with ascents on 12 May and 19 May that year. (Why are there so many attempts to climb the mountain in May? The weather is generally at its mildest and most temperate then, providing the optimum conditions for a successful summit.)

She had to overcome other, invisible obstacles too. To Sherpas, Everest (known as Sagarmāthā to Nepalese, and Chomolungma to Tibetans) is a deity and some of her fellow citizens thought that it was inappropriate for Chhurim, as a woman, even to attempt to climb it.

Like Chhurim, Lhakpa has struggled to find sponsors for her climbs. Hailing from the Markalu region of north-eastern Nepal, she’s lived in West Hartford, Connecticut, USA, for eight years, working at local stores, doing the dishes and taking out the trash, saving hard towards the next climb. The work can be demanding, and keeps her on her feet all day, but Lhakpa embraces it: without funding for gym workouts, her day job acts as her training. Plus, it allows her to fulfil her role as a mother at home. She set up her own expedition company, Cloudscape Climbing, in 2019, for climbers seeking to scale Nepal’s mountain peaks, and hopes that this may help her generate funds for her own future expeditions.

I don’t train. I just work hard at my grocery store. My advice would be to climb smaller Himalayan mountains first. This is the best way to set up your mind for Everest.

And in common Chhurim too, Lhakpa believes that she can act as an inspiration to other women who are so often patronized or marginalized in a male-dominated society. That’s something she remembers all too well from her homeland; when she was young, girls weren’t even sent to school. “In Nepal, man is first and woman is second… I said ‘No. Men can learn women things and women can learn men things.’”

But increased demand from foreign expeditions exacerbates competition and puts more pressure on the Sherpas. And unfortunately, the importance of respecting Everest is something that too few Western climbers seem to appreciate. Mountaineers inevitably leave behind mounds of garbage – from abandoned climbing gear to food tins, bottles and human waste – in their wake. 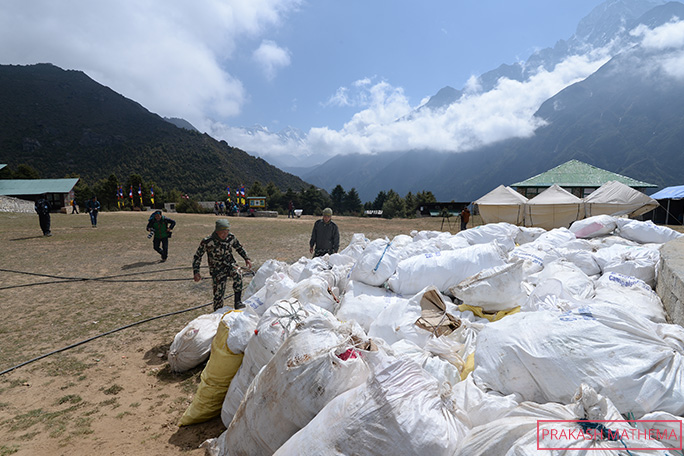 In an effort to restore some of Everest’s pristine splendour, volunteer groups have been carrying out mass clean-ups on the mountain for years now. Distressingly, the bodies of many of those who have perished on its slopes remain where they fell; they too need to be removed, which is in itself a dangerous task that requires the combined efforts of around five Sherpas. The largest clear-up on Everest in 2019 saw the removal of 10,386 kg (22,897 lb) of garbage from previous climbs. 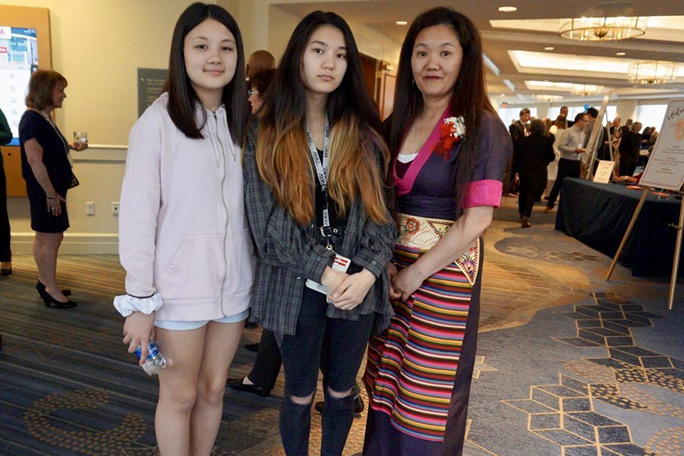 For, Lhakpa Sherpa – a single mother of three who has undergone great personal suffering in her life – climbing Everest is a healing process. She speaks of feeling an almost tangible connection with it, and her sensitivity towards it is remarkable: she postponed her climb in 2019 because her father had recently passed away and she didn’t want to take her sadness on to the slopes of Everest (“It would not be safe”); likewise, she believes that to show fear on a climb is dangerous (“If you’re scared, your fear scares the mountain”).

I don’t have a number in mind. I just want to climb Everest as many times as I can.

Her respect for Everest, and keen awareness of its dangers, is always uppermost in her mind. That’s why, at the start of every ascent, she whispers “Please don’t kill me” into the wind, explaining to the mountain that she has come there for a good reason. Perhaps the mountain has listened and understood: every one of her climbs of this iconic peak has been successful. 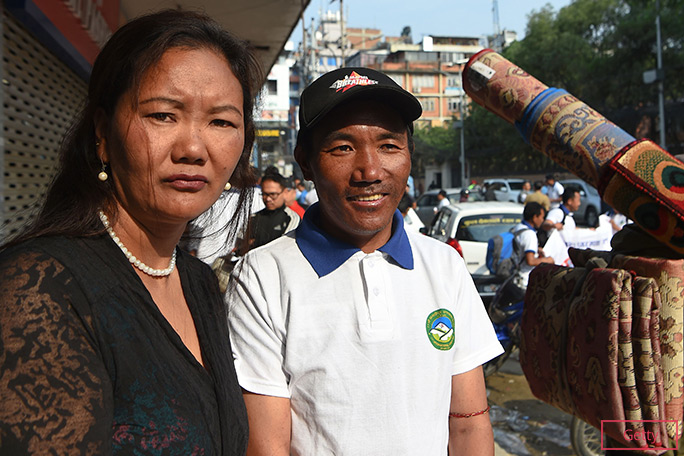 Kami Rita Sherpa and Lhakpa Sherpa appear in Guinness World Records 2021, out now in shops and on Amazon. 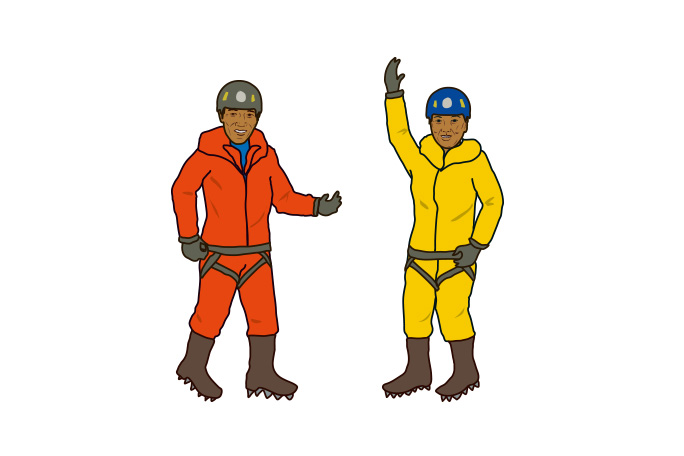