Dr Jane Goodall’s inestimable contribution to the study of primates, as well as wildlife in its natural habitat more generally, is no secret. Nor are her tireless campaigning efforts to ensure that nature is preserved for many generations to come. Discover how a 10-year-old with a dream to work with animals turned into one of the world’s greatest conservation tours-de-force…

The year 2020 marks a major milestone for British primatologist and all-round conservation champion Dr Jane Goodall. It is 60 years since she arrived in Tanzania to study chimpanzees in the wild, commencing what has become the longest-running field study of primates.

Not surprisingly, her extensive work has earned her countless awards, including a DBE (Dame of the British Empire – though she’s not personally a fan of the word “dame” as it makes her think of pantomimes!), the Légion d’honneur, the Medal of Tanzania and an appointment as a UN Messenger of Peace to name just a few of her accolades.

But going back to where it all began, even as a child, Jane’s passion for nature was apparent from a young age. Rather than the more common teddy bear, Jane had a beloved toy chimpanzee known as Jubilee.

Stories such as Doctor Dolittle, The Jungle Book and Tarzan were the most well-read on her bookshelf. Indeed, by the age of just 10, she’d made up her mind that she would travel to Africa one day to see these fictional animals’ wild counterparts with her own eyes.

At the time, Jane didn’t exactly receive universal support for her commendable ambition, as she revealed: “Everyone laughed. World War II was raging; Africa was far away; my family had little money, and I was a mere GIRL!” But she did have one key supporter in her mother. Her words of advice to her daughter were: “If you really want something, you may have to work very hard, take advantage of opportunities, and never give up.”

The opportunity presented itself (or more accurately, Jane engineered it) while she was visiting a school friend in Kenya in 1957. There, she arranged a meeting with the eminent palaeontologist Louis Leakey to discuss his ideas, which revolved around the premise that much could be learned about human origins by studying our primate relatives today. After initially doing some secretarial work for him, Leakey quickly realized Jane’s potential was being grossly under-utilized, and so arranged for her to be tutored by some of the foremost primatologists with a mind to her becoming his official assistant. 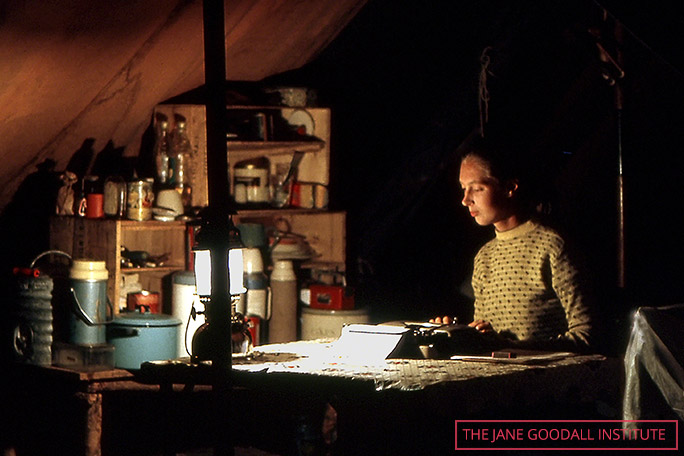 From dream to reality

And so it was that, three years later, Leakey organized Jane’s expedition to Gombe Stream Chimpanzee Reserve (now Gombe National Park) in western Tanzania, on the border of the Democratic Republic of the Congo. When she arrived in this seldom-visited stretch of rainforest on the edge of Lake Tanganyika (the world’s longest lake) on 14 July 1960, Jane was just 26 years old. She was accompanied by her mother (which was deemed a safety precaution at the time), and a local cook called Dominic, who would help them with managing the camp.

It was a big moment for Jane – after all, a lot of trust and funding had been invested in her to make this field expedition a success – but she wasn’t fazed:

“Going along the shore of Lake Tanganyika and looking at the steep mountains and thick forested valleys, I wondered how I would ever find the chimps,” she recalled. “But after the game ranger helped to set up the tent, I climbed up the opposite slope, alone, and sat looking out over the lake. Once I heard my first baboon bark, I was so happy and excited.”

Although Jane had realized her ambition of moving to a jungle in Africa, she had to wait a little longer before she could gain the chimps’ trust in order to make up-close observations. 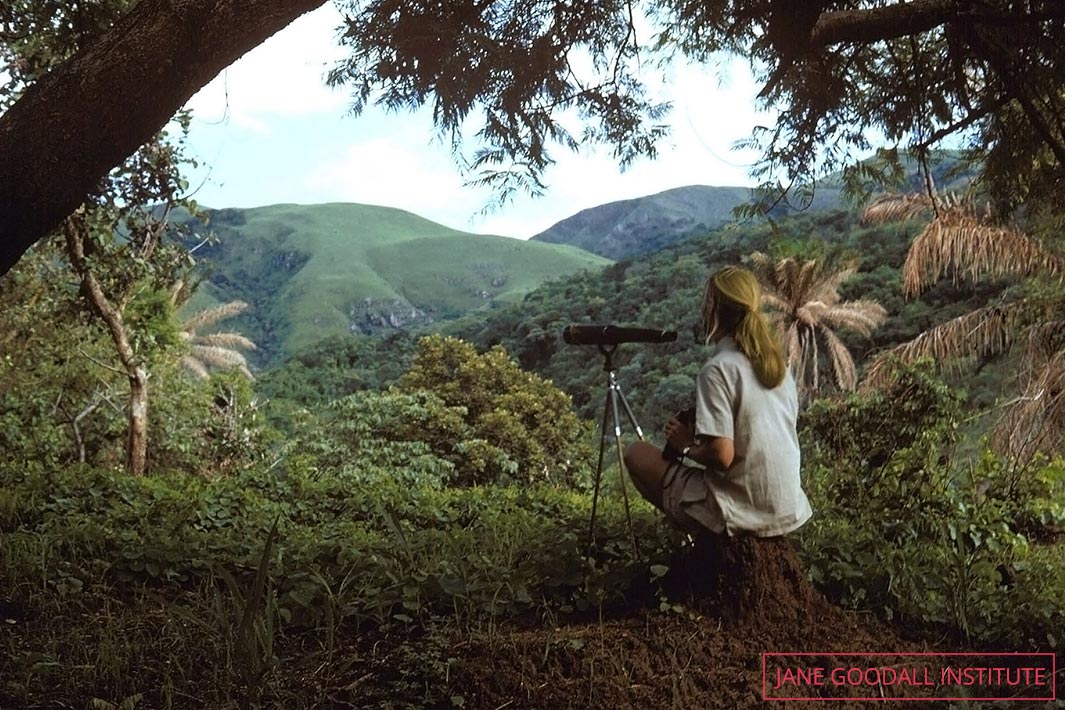 “For at least three months, the chimps ran off whenever I managed to find them,” she told us. “My observations were mostly made from a high spot – “The Peak” – through binoculars. But gradually they were getting used to me.

“One never-to-be-forgotten day, I saw a group of about seven chimpanzees grooming and playing on the other side of a narrow ravine. Intending to get a little closer, I misjudged distance and emerged from the vegetation very close to them. Of course, I expected them to run, but to my amazement they looked up at me, then carried on grooming and playing. I was accepted. It was the proudest moment of my life.”

I never tried to get really close until they totally accepted my presence. Then it was often they who approached me. Only when animals know you are there and are not concerned can you be sure they are behaving normally.

One of the most ground-breaking behaviours that Jane observed was the chimps manipulating twigs and grass to essentially “fish” for termites. This demonstration of tool use by an animal literally rewrote the rulebook on what was deemed to distinguish Homo sapiens from other primates.

Jane distinctly remembers how she felt after making this game-changing discovery: “I was amazed. I knew that Louis Leakey, who spent his life searching for the fossilized remains of our Stone Age ancestors, would be thrilled. Back then, we were defined as ‘Man the Toolmaker’ and it was thought only we used and made tools.” When Jane telegrammed her mentor to reveal the exciting news, Leakey responded: “Now we must redefine Man, redefine Tool – or accept chimpanzees as human!”

Observations of the chimps (of which there are currently about 100) at Gombe continue to this day. The work is now carried out by the Jane Goodall Institute (JGI), which was founded in 1977 and has more than 30 offices around the globe. Of course, how the chimps are studied has changed a lot since the early days, now taking advantage of cutting-edge science and technology that wasn’t previously available.

The organization now makes use of hi-res satellite imagery, forest-change modelling software and lab techniques that enable the chimps’ urine and faeces to be analysed to better understand family lineages and disease. The latter is particularly important as we learn more about the cross-over of illnesses from humans to chimps and the threats faced by pandemics such as Covid-19.

In total, since Jane began in 1960, more than 165,000 hours of observations have been collected, which have provided the data for hundreds of academic papers and theses. 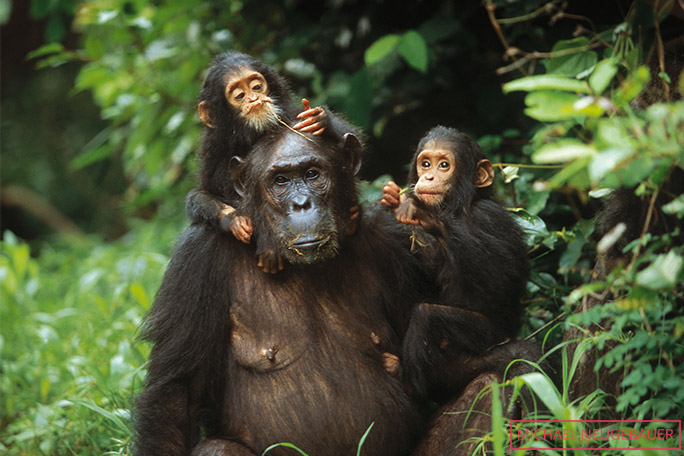 And if you’re wondering after six decades if there can be anything new left to learn, you better believe it, as unprecedented insights into the biology and societal structure of these complex animals (among humans’ closest relatives genetically speaking) are still coming to light. For instance, Gombe is home to a pair of chimps called Golden and Glitter who are the oldest known twin chimpanzees in the world, having turned 22 in July 2020. The sisters, who have exhibited very different personalities since they were young, have provided an invaluable opportunity to see twin dynamics.

Over the years, the remit of the JGI has broadened to also helping people, because Jane knows more than most that the welfare of Gombe’s wildlife is intrinsically tied to the welfare of the local population who live in the environs of the national park.

“We developed a holistic programme, called TACARE, to help the local people. That includes suitable farming operations that do not destroy the soil, restoring fertility to overused farmland, shade-grown coffee, better health and educational facilities working with local Tanzanian authorities, appropriate water-management programmes, Microcredit programmes based on Mohammed Yunus’ Grameen Bank, and we provide family-planning information. We also provide as many scholarships as possible to keep girls in school after puberty.” 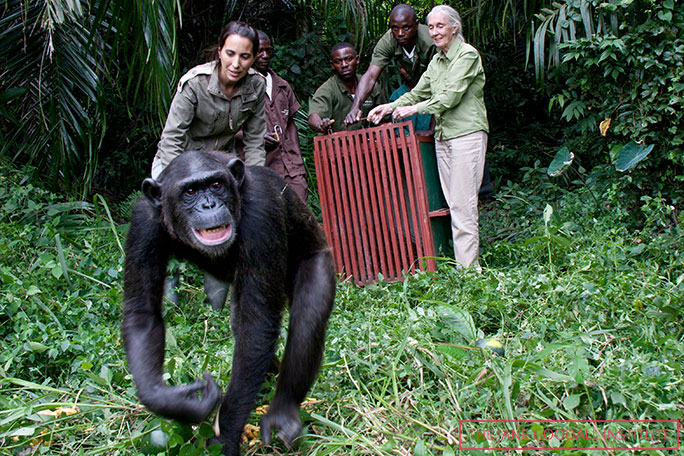 Another major initiative spearheaded by the JGI, and a project that Jane is immensely proud of, is the “Roots & Shoots” programme. The premise behind this youth chapter of the JGI, Jane told us, is that there’s no use in endlessly pushing a conservation agenda “if new generations are not better stewards than we have been.”

It kicked off in 1991 with a meeting held by Jane and 12 high-school students in Tanzania’s largest city, Dar es Salaam. They came to discuss the issues they were seeing day to day – from illegal dynamite fishing and poaching in the national parks to the abuse of street dogs and drug use on the streets. “From the start its main message was that every individual matters, has a role to play, and makes a difference EVERY day,” Jane said. “And we get to choose what sort of difference that shall be.” 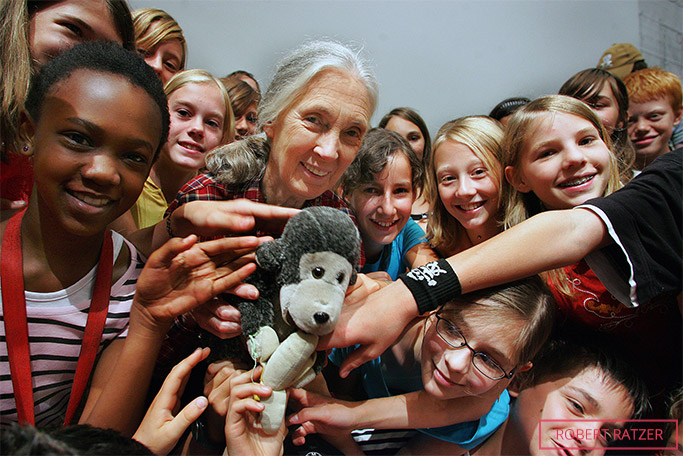 There are now R&S programmes in more than 100 countries, encouraging activism across all age groups from kindergarten right up to university. It’s also expanded to older generations looking to get involved, including corporate engagement, retirement homes and even prisons.

While most of us would struggle to ever live up to all that Jane has achieved for conservation, she insists that each and every one of us has a role to play. “Everyone can make a difference. People often do nothing because they feel helpless and hopeless.

“But if everyone thinks of the consequences of the small choices they make each day – what they buy, eat, wear. How was it produced? Did it harm the environment? If millions of people make ethical choices we shall move towards a healthier world.”

Dr Jane Goodall appears in Guinness World Records 2021, out now in shops and on Amazon. Read more about Jane and the conservation work of the JGI at janegoodall.org. 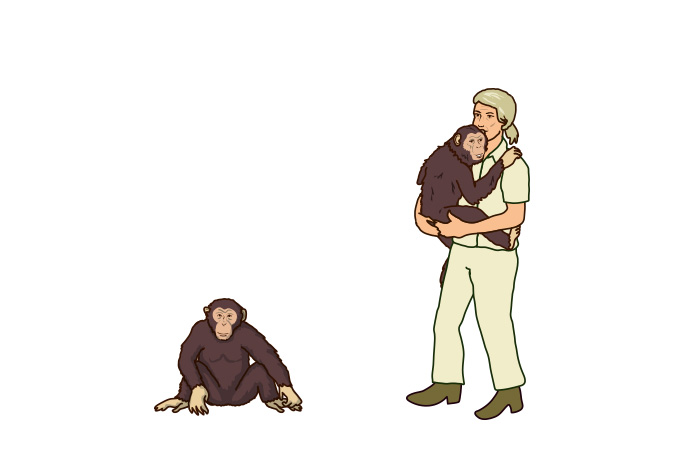 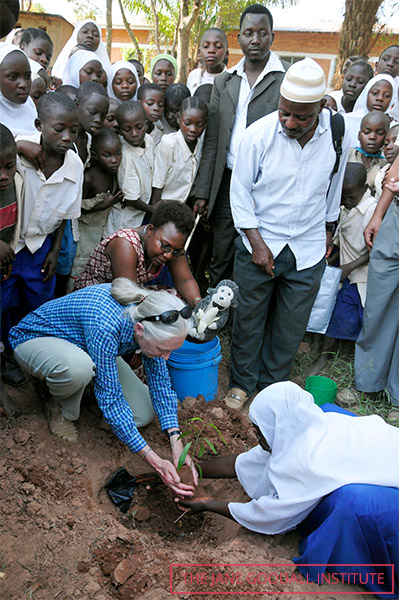