If you were to survey teens on how many had been told by their families to "stop wasting time" on videogames, you could bet your bottom dollar that the results would be high... British esports star Jaden Ashman is a testament to the fact that gaming has evolved in the 21st century, and for a dedicated few the pastime has levelled up from recreation to profession.

Jaden Ashman’s (UK) story of Fortnite World Cup glory is one that any gamer can hold up when admonished for spending too much time playing videogames. At the age of just 15 years 229 days, Jaden, better known among gamers as "Wolfiez", walked away from one of the biggest esports tournaments with over $1 million in his pocket, making him the youngest esports millionaire from a single tournament. Perhaps even more incredibly, Jaden didn’t even come in first place; he placed second in the Duo tournament with his team-mate Dave "Rojo" Jong from the Netherlands.

Over the past few years, the world of esports has grown from an interesting experiment to see if a mass audience would actually enjoy watching other people play videogames competitively, to one of the world’s biggest spectator sports. Goldman Sachs estimates that the global monthly audience for esports is around 167 million people, which is larger than both the NHL and Major League Baseball. 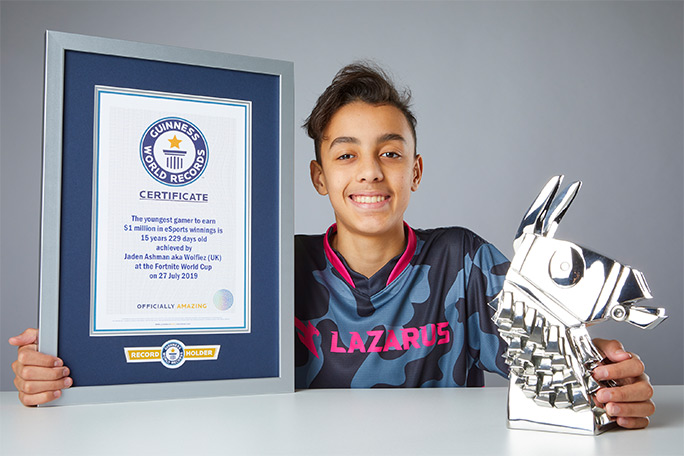 Like most gamers, Jaden started his gaming career by playing a little of everything; from Minecraft to Call of Duty. “I started playing with my uncle, he used to play controller and he was really good at it so I kind of looked up to him and it was the first thing I took on.” This laid the foundation for Jaden to become one of the preeminent controller players in esports.

The rise of esports

Typically mouse & keyboard is considered the superior input method because a mouse has a much more precise aim than an analogue stick. To compensate, controller players are given a touch of "aim-assist", which mildly draws the players crosshair towards a target. Though a tad controversial for competitive play, in the end Jaden is celebrated for doing so well in professional tournaments and representing a community of gamers who prefer controllers.

The road to becoming a professional gamer is by no means an easy one. Most gamers will play for an hour or two in a day – maybe a bit more if it’s raining outside – but like any sport, to actually get to a competitive standard takes hours and hours of practice and training. According to Malcom Gladwell in his book Outliers: The Story of Success it takes around 10,000 hours to become an expert at something, so let’s do some maths... Fortnite was released in July 2017 meaning there were 17,664 hours available to play it before the 2019 world cup duos final. Based on averages, Jaden would need to save 5,840 hours for sleeping and 1,900 for school, which leaves 9,904 hours available to become a Fortnite expert. Working to Gladwell’s 10,000-hour principal, Jaden spent 100.97% of his time mastering Fortnite – the very definition of taking it to the limit.

Since catapulting into the mainstream Fortnite became the first battle-royale videogame with 250 million registered players as of 20 Mar 2019. One of the most surprising things about this success is that Fortnite: Battle Royale was actually a free offshoot mode of the original game which was titled Fortnite: Save the World, a game where players had to build a base and defend it from waves of computer controlled enemies. The developer – Epic Games – saw how popular the battle-royale genre was becoming with the success of Player Unknown’s Battle Grounds and managed to create their own take in a mere two months. 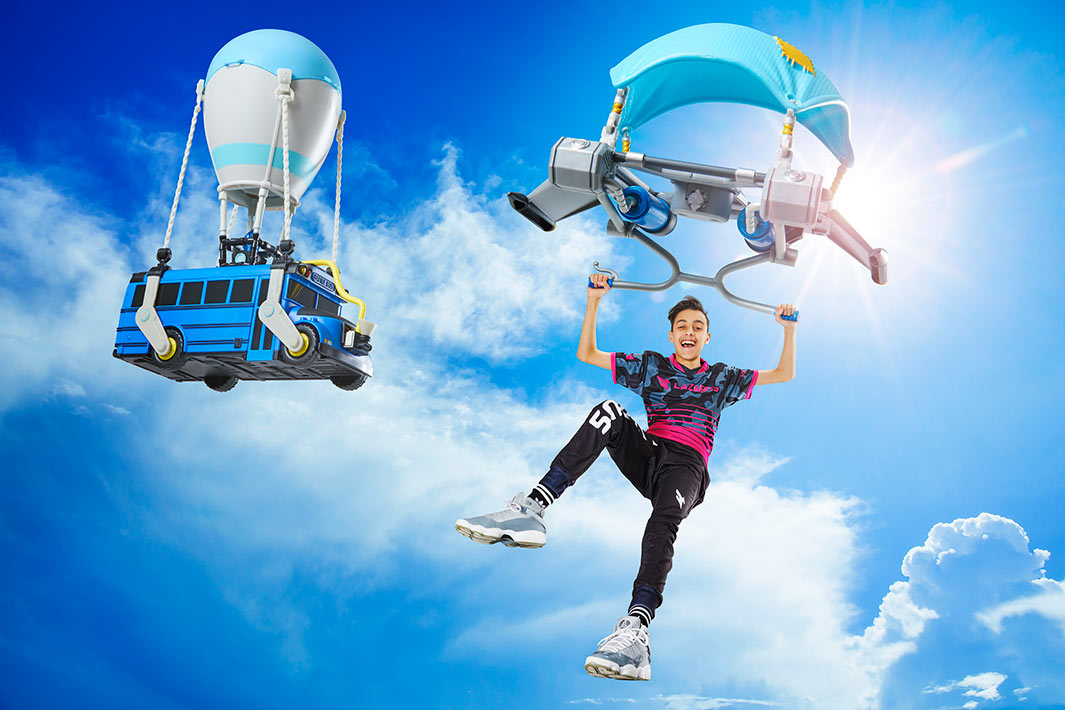 Fortnite’s meteoric rise in popularity resulted in it breaking down boundaries within the gaming industry. Before Fortnite, the term "cross-play" was an almost mythic term for when players on one system – say an Xbox – could play against others on a competing system – like the PS4. Cross-play was a difficult thing to arrange because it required the big three gaming companies: Microsoft, Sony and Nintendo to cooperate with each other and allow player interaction across their multiplayer services. But on 26 Sep 2018, after a change of policy by Sony, Fortnite became the first videogame to support cross-play. Sony had earlier blocked calls to enable cross-play for Fortnite on the PS4, but after pressure from gamers and Epic, finally found a solution to enable cross-play.

Now, Fortnite is becoming more than just a videogame; Epic Games has constantly been expanding the game to the point where it could now be described as a social media platform. People can now log in to Fortnite just to hang out and Epic Games is catering for this with special events like movie screenings, trailer reveals and even full-on in-game music concerts, for which they set yet another record. The highest attendance for an in-game concert is 12.3 million concurrent viewers and was achieved by Travis Scott’s (USA) "Astronomical" event, which was hosted in Fortnite on 24 Apr 2020.

Bringing things back to Jaden, in every athlete’s quest to become great, there will be hurdles they must overcome, and Jaden faced possibly the toughest any can face – his own mum. Jaden’s mum, Lisa, quite understandably, thought that Jaden was spending far too much time on his Xbox and at one point even threw it out of the house! 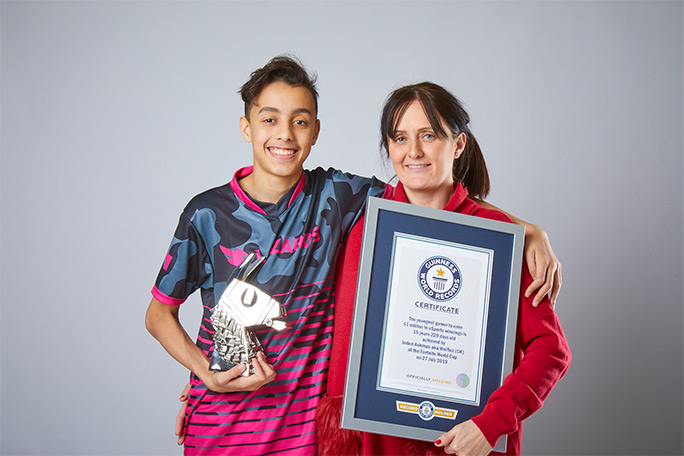 “Me and mum clashed a lot but we figured it out in the end,” Ashman said. “I would never get my homework in on time. Sometimes I got a bit obsessive with my gaming, but we started setting boundaries.”

At the start, my mum was against me playing Fortnite, but I’ve proved to her that I wasn’t wasting the hours each day in my bedroom playing instead of doing my homework. I’m not planning on getting this money and just quitting. I’ve still got a full career of gaming ahead of me.

It was when Jaden got the invite to the inaugural Fortnite World Cup in 2019 that the legitimacy of his talent truly started to sink in and he could not wait to take his mum: “Jaden said to me before we went [to the World Cup] ‘I’m going to take you to New York and show you what I can do’. And he did. He wanted to make me proud of him and for me to see what he’s capable of.” The first Fortnite World Cup Finals took place at the Arthur Ashe Stadium in Queens, New York City, USA, on 26-29 Jul 2019. The event itself was record-worthy in that it boasted the largest prize pool for an esports tournament for a single-player game - a staggering pot of $15,287,500 (£12,338,400). The first Fortnite World Cup Champion (Solo) was Kyle Giersdorf (USA), aka "Bugha", while the first Duo Champions were Emil Bergquist Pedersen (NOR), aka "Nyhrox", and David Wang (AUT), aka "aqua". Each earned the top prize of $3 m (split in two for the Duo winners). 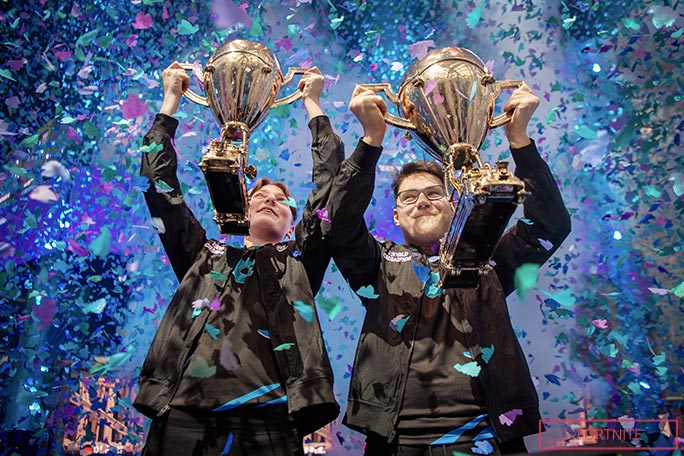 With his winnings Jaden promised he would buy his mum a house and one year later he has delivered on that. “It’s a really good feeling to be able to buy the house, and keep my word to my mum,” he said in an interview with the BBC. When asked what’s next for him and his esports career Jaden replied, “I want to become the clear number one best. I want people to know I’m the best player.”

Most would assume that the world of esports wouldn’t be too affected by the global pandemic – what with most videogames being played online anyway – but that hasn’t been the case. The 2020 Fortnite World Cup was cancelled like most other sporting events. While epsorts are played in front of computer monitors, there is still the hugely popular spectator element to them. Tournaments for League of Legends, Overwatch and Fortnite can fill stadiums, so just like all other sports, esports has missed its cheering crowds.

But that hasn’t stopped Jaden’s career. In 2020, he joined a new esports team (Excel Esports) and has earned $130,000 (£97,000) competing in the FNCS Invitation. So even though the world in 2020 is in a precarious state, Jaden is well on the way to fulfilling his second promise to himself: to become the best.

Jaden isn't the only one who earned his place in the record books thanks to this game-changing battle-royale title. Another gamer who has mastered his Fortnite gameplay is the USA's Rocky Stoutenburgh, aka "RockyNoHands", though he has developed a slightly different technique to play. A serious injury left Rocky paralysed from the neck down, but despite this, he has trained himself over many years to play games using just his mouth. This enabled him to set the records for most Victory Royales and most eliminations in a single match in Fortnite using a QuadStick mouth-operated joystick, with 509 and 11, respectively, as of 26 Mar 2019. Think you're pretty good at Fortnite? There's also a chance for;you to become a Fortnite record-breaker: our records team has built a special GWR target range challenge that you can try out at home. The record is for;highest score in one minute on the GWR Target Practice Fortnite creative map and is currently held by Ryan Benson (India) with a score of 320. Why not give it a shot? You can apply here. You could join the same club as Jaden and Rocky (though for full disclosure, the reward will be purely gaming kudos as opposed to millions of dollars!)

Jaden Ashman appears in Guinness World Records 2021, out now in shops and on Amazon.