In and out of the pool, Ellie Simmonds keeps collecting success after success.

Born Eleanor May Simmonds, she made history as a Paralympic champion swimmer. Her jaw-dropping times in the pool and "work hard, be yourself" attitude out of it made her one of the youngest and most loved sports star globally and the youngest recipient of an MBE in history.

Even though she called time on her Paralympic career in 2021 Simmonds' name keeps turning heads and her star keeps shining bright at Guinness World Records. 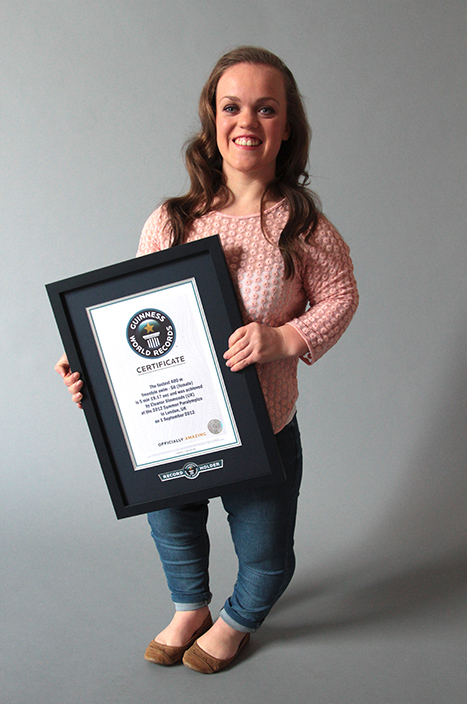 Born 11 November 1994, Simmonds grew up in Aldridge, a part of the Metropolitan Walsall Borough, UK.

She is part of a large family, surrounded by three sisters and a brother.

She discovered her passion for swimming at only five years old thanks to her parents, and never looked back.

However it was only a couple of years later, during the 2004 Paralympic Games in Athens that inspired her to try an agonistic career.

As reported by the International Paralympic Committee:

"I watched a lady called Nyree Lewis, she was a [British] disability swimmer, and she got a gold medal. I remember as a kid asking, 'How old do you have to be to go to the Paralympics? How does she do that?'"

"That was when I was really saying, 'Oh man, I really want to go to a Paralympics, I want to get a gold medal'."

Simmonds has been diagnosed achondroplasia, a genetic condition that accompanies her since birth and impairs her protein production.
This condition can manifest in short limbs, curved lower spine and bowed lower legs, and is the main cause of dwarfism in the UK.
Despite the name of this syndrome translating in "no cartilage growth" and the occurrence of loose joints and poor muscle tone among the symptoms, it's mainly due to reduced bones growth.
However, Simmonds has a very positive outlook on her condition, and tries to surround herself with people with the same positive attitude while raising awareness and promoting education on dwarfism.
"We don’t need to be cured. We’re so happy with who we are," Simmonds said in an interview at Inews.
Due to her achondroplasia and her short stature, Simmonds swims in the S6 disability category.
In the official paralympic swimming classification, with S meaning Freestyle, Backstroke and Butterfly strokes, this class includes athletes with several different types of disability.
Some of them include short stature, loss or amputation of limbs and cerebral palsy.
Due to her condition, when Simmonds was 12 four metal plates were implanted into the champion's legs to help straighten her limbs.
However, she never let any challenge stop her from achieving her dreams, and kept working hard: passion, ambition and a balanced training regime made the up-and-coming athlete into a global star.
Simmonds spends most of her training regime in the water, starting from Monday morning.
Speedo reports that: "In the pool, Ellie likes to add training aids to vary her training and improve her stroke.
"Her favourite training aids are a pullbuoy, finger paddles and a snorkel, which Ellie uses during long distance training sessions."
Other than several hours in the water, Simmonds' training regime comprehends other steps out of the pool.
She exercises before and after her training session in the water to warm up, and also takes gym and yoga classes to maintain her muscles flexibility.

She became the youngest British athlete to compete at the 2008 Summer Paralympics in Beijing, where she took part in several events: the 50m, 100m and 400m freestyle, 50m butterfly, and 200m Individual Medley.

Although she was already known as a swimmer to keep an eye out for in the pool, 2008 really saw Simmonds appearing on the scene at a national and international level.

That year, Simmonds became the second youngest British Paralympian in history to win a medal.

She was only second to British swimmer Joanne Round, who was only 12 when she competed in 1988 in Seoul.

However, her first appearance and triumph at the Games didn’t only win Simmonds two golds, but also the affection and appreciation of the British (and international) public.

She never rested on her laurels, always pushing herself to her limits and trying new adventures. 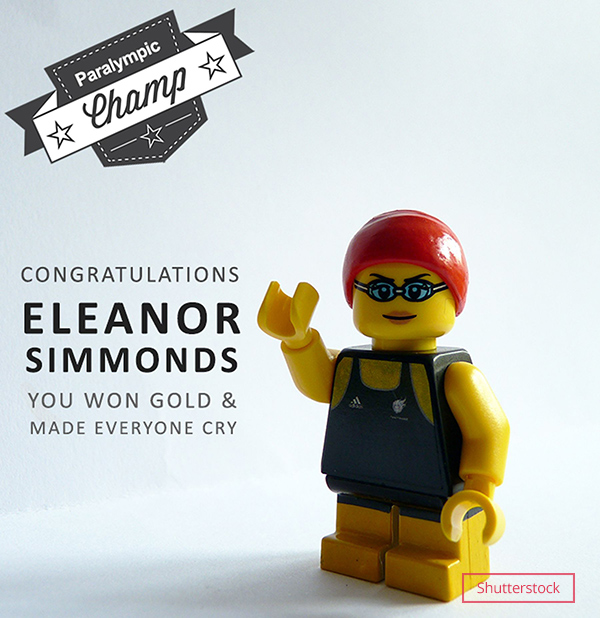 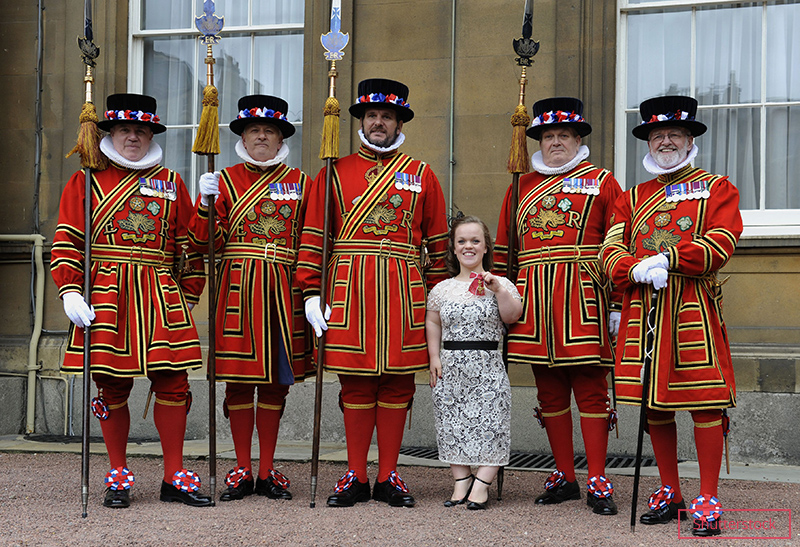 Following this triumph, in 2008 she was also awarded BBC's Young Sports Personality of the Year.

Then, at 14 years and 50 days, she became the youngest recipient of an MBE ever.

As announced on The Gazette on 31 December 2008, Simmonds was acknowledged as a member of the Most Excellent Order of the British Empire for her "services to disabled sport".

After being appointed with her first MBE, Simmonds was then elevated to Officer of the Order of the British Empire in 2012. 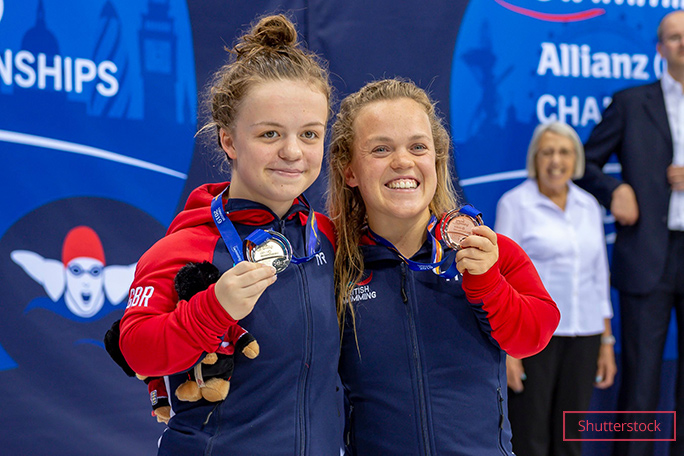 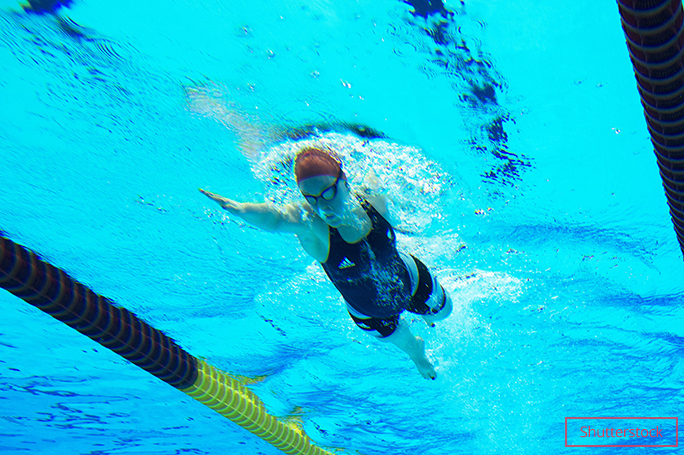 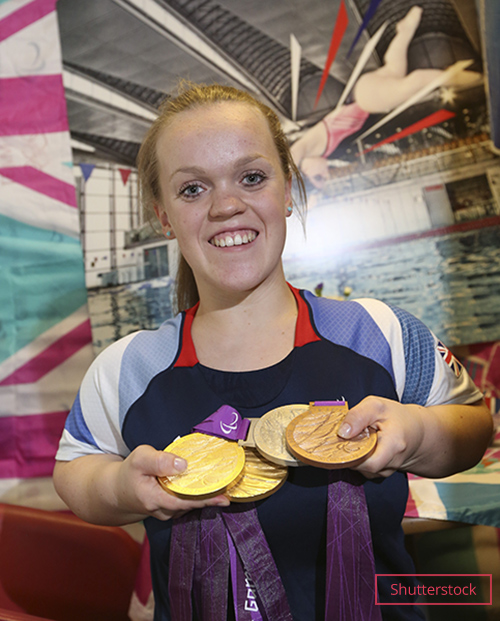 On a winning streak

Her victories in Bejing were only the beginning for future multi-record holder Ellie Simmonds.

Only the following year, Simmonds smashed another record at the IPC Swimming World Championships 25 m in Rio de Janeiro, Brazil.

On that occasion, the British champion set a new time for the fastest short course 200 m freestyle swim by a female para swimmer in the S6 category with little over 2 minutes 44 seconds. Setting record after record, Simmonds was on a winning streak.

That win cemented her presence in the international Olympus of swimmers.

On 1 September 2012, Simmonds proved to be a force to be reckoned with.

In London, at the 2012 Summer Paralympics, the swimmer seized a gold-worthy performance and flew to win the 400m freestyle.

Two days later, on the evening of 3 September, she took Gold in the 200m Individual Medley, breaking the World Record that she had set in the qualifying round that morning

"The highlight of my career was London 2012," she said to Skysports.com.

"That was a Games that I will never, ever forget and it was definitely my highlight."

In 2013, at the National Open Short Course Championships in Sheffield, UK, swimming free will grant her another success: she broke the record for fastest swim short course 400 m freestyle - S6 (female) with a time of 5 minutes 27.58 seconds.

In 2014, Simmonds added another record to her collection: with 3 minutes 5.13 seconds, she conquered the fastest swim short course 200 m individual medley - SM6 (female).

At the Olympic Games of Rio 2016, with a big smile on the face and a new personal record, Simmonds once again sped past the other participants and placed herself on the podium.

The 200m individual medley saw her seizing a time under three minutes (2:59.81) and winning her fifth Paralympic gold.

Lastly, she went on to seal a bronze in the 400m freestyle behind Ukranian paralympic swimmer Yelyzaveta "Liza" Mereshko and China's Lingling Song.

After Rio 2016, however, the British swimmer found herself struggling to find that old passion for the water that first made her fall in love with the pool.

Simmonds was one of the 13 swimmers affected by the climate of bullying and fear in the parolympic swimming team, and the bullying behaviors she was forced to face by members of the staff added further mental pressure to the intense stress of competing internationally.

The medalist took some time off the pool before returning to win in 2017.

"Work hard and be yourself" 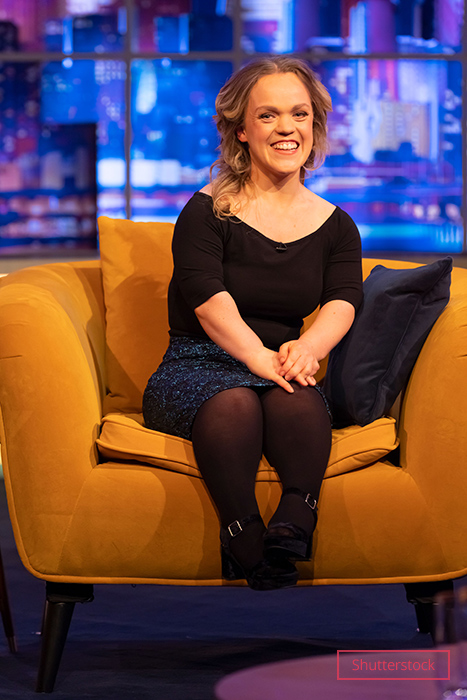 In June 2019, Simmonds went on to break yet another record.

With the incredible time of 11 minutes 3.41 seconds, she triumphed above all other swimmers at the International German Championships in Berlin, Germany.

Before the pandemic, Simmonds announced her intention to retire from the Paralympic scene after Tokyo 2020.

The global events that followed caused her to postpone her plans, and gave her more time to consider her future career paths and new adventures – in and out of the pool.

Simmonds said to the Guardian she felt the pressure and expectations often forced upon athletes, pressured to win to keep the favor of the public, and therefore had not set herself any targets for Tokyo.

"I'm just going to go out there and compete and give it everything because we had four months in 2020 when we were out of the pool and I couldn't train," the champion said in the article.

The confirmation of the beloved athlete's retirement came after Simmonds missed out on a medal in the Tokyo 2020 Paralympics, opening a new chapter of Simmonds' life and concluding several years of shaping the world of swimming.

She’s gone for gold, and now she’s gearing up for glitter. We can’t wait to see @EllieSimmonds1 make waves on #Strictly 🥇 pic.twitter.com/rLkaB6Qyg2

In 2022, Simmonds was appointed as a non-executive director to the Birmingham 2022 Commonwealth Games Organising Committee board.

She also announced her participation in the 20th series of the beloved BBC One dancing show, Strictly Come Dancing.

When Simmonds is not breaking records or testing her skills on the dance floor, she loves baking and travelling.

But water isn't only the element she loves: it's also a fundamental global resource.

To protect our world and guarantee continuous and fair access to drinking water sources across the world, Simmonds is also an ambassador for the international non-governmental organization WaterAid.

As an ambassador, she raises awareness on the importance of ocean conservation.

She has witnessed first-hand the beauty of the ocean and is determined to aid their protection, encouraging people to do the same.

One interesting thing to notice is that, despite her lifelong passion for the water, she wasn't always comfortable in the ocean.

"Believe it or not, I actually used to be terrified of swimming in open water," Simmonds reported on WaterAid's website, calling it one of the best experiences of her life. "But I conquered my fear when I took part in a television documentary a few years ago and fulfilled my lifelong ambition to swim with dolphins."

Simmonds is using her fame to give back to the community and is a patron of the charity Dwarf Sports Association UK.

Find out all about Simmonds, her golds, her recognitions and her many records, inside the brand new Guinness World Records 2023, available in store and online from September 2022.