The year is 2021 and, if you don’t know BTS (방탄소년단), you have probably been living under a rock. Meet BTS’ all-boys line-up: Jin, Suga, J-Hope, RM, Jimin, V and Jungkook. 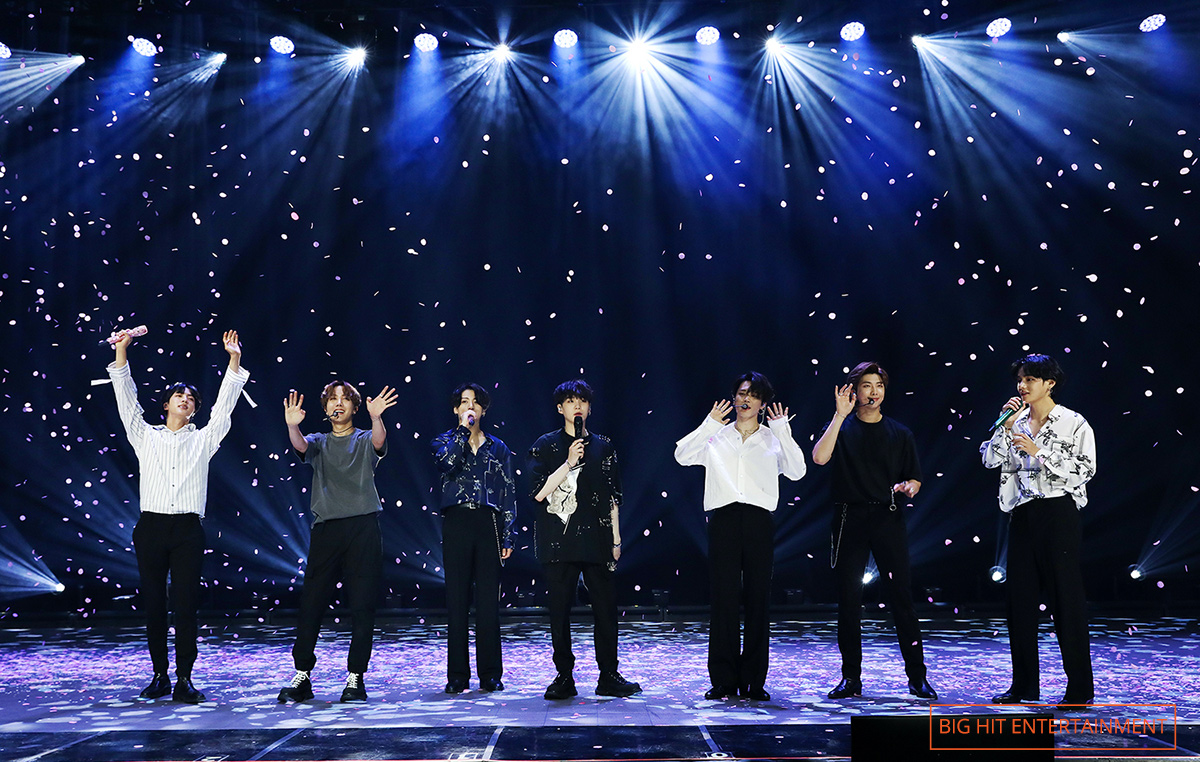 BTS at the virtual live concert Big Bang Con: The Live in 2020.

The septet’s original name is Bangtan Sonyeondan, also known as the Bangtan Boys, which translates as “Bulletproof Boy Scouts”.
However, they are widely known by the acronym BTS: the South Korean boy band that has taken the world by storm, changing the rules in the music and entertainment world. The most hardcore K-pop fans might know names like Shinee and Stray Kids, and most definitely remembers PSY’s record-breaking “Gangnam Style” (which was the first video to receive 1 billion views on YouTube).

However Jin, Suga, J-Hope, RM, Jimin, V and Jungkook took the K-pop genre to a whole other level on the global stage.

Originally a hip-hop band, BTS quickly broadened their horizons to embrace many other genres, with lyrics and melodies that speak to the taste of a much wider and international audience.

However, the boys still all co-write and co-produce the majority of their content.

After years of training and gaining success (as well as an extremely active fandom called the A.R.M.Y) in South Korea, the septet has put K-pop in the spotlight, skyrocketing the genre’s popularity on a global level.

At the moment of writing the group holds a staggering 23 world records, making them one of the most successful bands in the history of Guinness World Records.

They don’t seem to show any signs of laying down their microphones yet, though, and will surely give their ARMY new reasons to cheer for them.

The seven boys won over crowds of adoring fans thanks to their heartfelt and genuine lyrics, which often cover themes like love struggles, social issues and growing up, coupled with an upbeat, catchy rhythm and stunning choreography.

Despite their relatable lyrics and the bubbly pop direction taken by the boy band, some of the members also dabbed in the rap underground scene.
In May 2020, Suga released “Daechwita”, a rap song that takes inspiration after traditional military marches of the same name, under the name Agust D.

“Outwardly, they are polished and professional, but hours of laughter, secret handshakes and gifts exchanged show those around them that underneath this showstopping, neatly groomed movement are just some guys who love music, one another and their fans.”

– Halsey, singer and songwriter, for Times 100

The K-pop band was first noticed by Big Hit Entertainment CEO Bang Si-hyuk in 2010. Despite the initial plans for the band's future, Bang Si-hyuk decided to move towards a more contemporary pop sound, to create a

"hero who can lend teenagers a shoulder to lean on, even without speaking a single word of the language".

The band officially debuted on 12 June 2013, with their single album 2 Cool 4 Skool.

The album jumpstarted the “School Trilogy” series, which comprehended BTS' first mini album O!RUL8,2? (September 2013) as the second part. The EP Skool Luv Affair (January 2014) was the third and (initially) final act of the trilogy, although it was expanded later. Their first studio album Dark & Wild, released in 2014, followed as an extension of the “School Trilogy” universe. Backing that success, BTS recorded their first Japanese album in 2014.

In February of the following year, they also held their very first tour outside South Korea: the "Japan Tour 2015 Wake Up: Open Your Eyes". 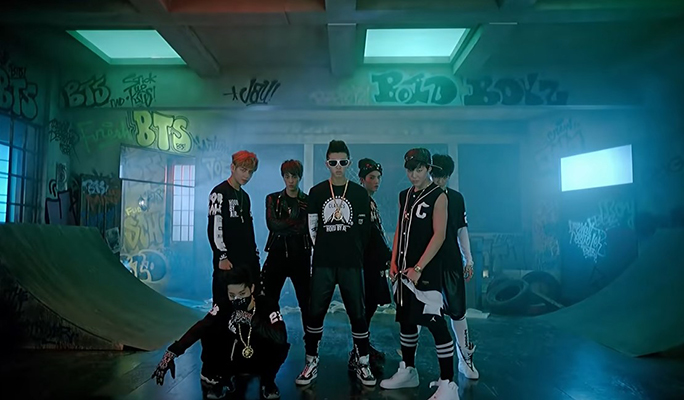 Japan was just the first step of an international journey that would bring BTS’ names and music well beyond the South Korean border.

As their style developed and their popularity spread, BTS focused on a tune aimed to describe the beauty and fragility of youth, defined as “the most beautiful moment in life”.

Ever since, the band’s signature style has spread, first through Asia, and then further afield. Just like music knows no barriers, their fame, vibrant aesthetic and lyrics are now instantly recognizable the world over.

Along the way, they have swollen the ranks of their dedicated, always-connected fans: the ARMY. 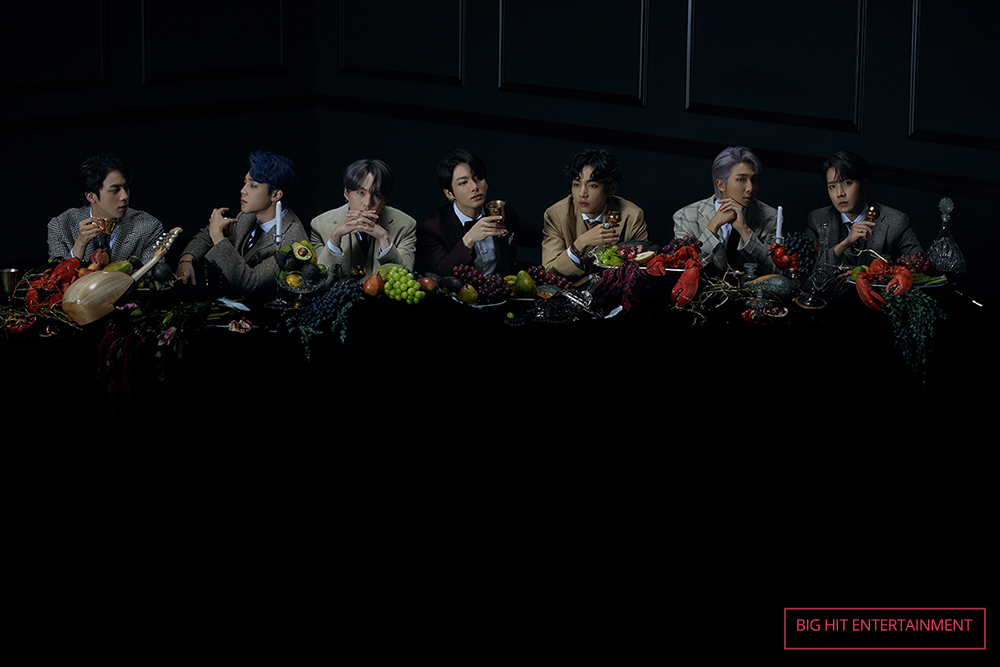 In 2016, BTS album Wings presented single tracks to showcase each band member’s strength. It was praised by legends such as The Rolling Stones and Fuse, and BTS broke new ground by becoming the first Korean group to top the Billboard Social 50 chart in the USA. This marked the beginning of an American love affair with the Bangtan Boys that would see them claim No.1s in America’s most revered music charts.

Soon, there wasn’t a single TV show, podcast, social media account, newspaper or magazine that wasn’t talking about BTS. In 2017, the band performed on their first world tour, which took in 12 countries.

Arguably, it was 2017 that truly marked the beginning of BTS’ international breakthrough, with collaborations with artists such as Steve Aoki, The Chainsmokers, and recently a remix of TikTok sensation “Savage Love” with Jawsh 685 and Jason Derulo.

All the while, the group kept positioning at the top of the charts, both at home and abroad. BTS’ first visit to the US took place in 2014, in Los Angeles, where they appeared at the KCON, which describes itself as the world’s biggest Korean culture festival. They performed at the festival several times, cementing their international success. Thanks to “Mic Drop”, their collaboration with Steve Aoki, in 2018 the septet also received the Platinum certification – marking them as the first Korean group with a Platinum-certified single in the USA. 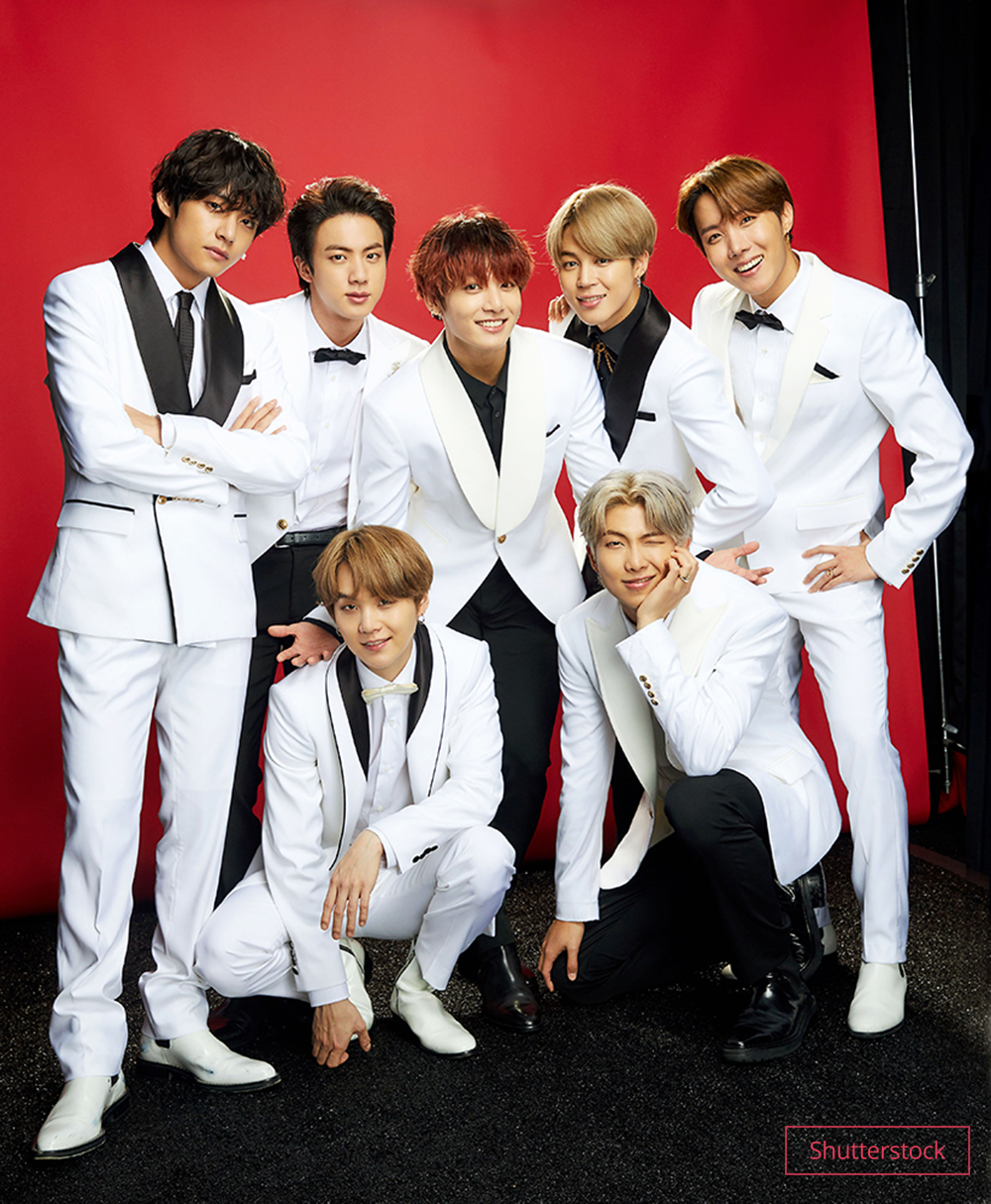 Although a Western K-pop community always existed online, BTS undoubtedly shook up the industry, igniting a true online revolution – partly thanks to their ever-loyal ARMY.

Ever the versatile group, BTS didn’t just stick to music. The record-breaking band released Burn the Stage: The Movie in 2018. It would be the first of four films, the most recent being 2020’s Break the Silence: The Movie, which bagged the MTV Award for Best Music Documentary in May 2021.

Beyond albums, tours and movies, the record-breaking septet have also starred in several TV series (including their own series, BTS Run!), as well as a 15-episode web show. Their TV appearances and cultural efforts to raise awareness for South Korean culture and language include Weverse’s Learn Korean with BTS, which ran for 30 episodes.

They starred in several well-loved Western live shows, included James Corden’s Carpool Karaoke, Jimmy Kimmel Live and The Ellen DeGeneres Show, and performed at events such as the 61 Grammy Awards and America’s Got Talent.

As a sign of just how far they had come, in 2019 , the band was included in the highly regarded TIME 100 list, where they appeared as part of the 100 most influential people in the world in the artists' section.

On that occasion, they were crowned the "Princes of Pop".

The following year, the band was named as 2019 Hitmakers Group of the Year by Variety. In 2020 they were elected Entertainer of the Year by Forbes and made their debut at the MTV Video Music Awards, where they won four prizes:

The international appearances broke yet another barrier in the world of arts – bridging East and West in a common enthusiasm for the septet’s upbeat melodies and jaw-dropping choreographies.

#ARMYs! We’re honored to celebrate this amazing year and ring in 2018 by performing on @NYRE! Watch 12/31 at 8/7c on ABC. #BTSxRockinEvepic.twitter.com/uOLHPR5Daw

Culturally, BTS jumping from strength to strength aided a global rediscovery of South Korean society. Their popularity grew hand in hand with a general awareness and passion for "K-culture", which spread across the web like wildfire. It’s hard to determine if the rise of trends such as K-beauty and K-dramas is a consequence or a cause of BTS’ ever-growing popularity, but one thing is for sure: the country is, now more than ever, one of the global trendsetters. 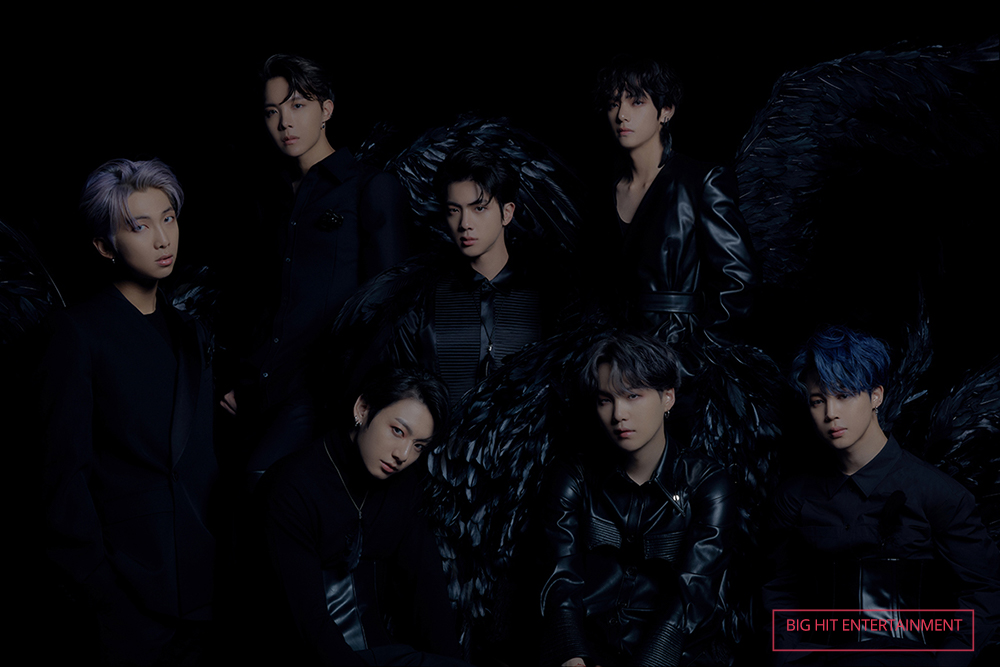 It’s almost impossible to compile all of BTS’ accomplishments, mentions, public appearances and social awards in a single space; the list goes on and on, endless, in a string of praises and successes.

Many artists spend their careers trying to grasp only a handful of the many accomplishments these seven talented boys achieved in just a few years.

The barriers BTS overcame – cultural, linguistic, and within the music industry – and the way they unified so many people across the world with the sheer power of their art is, and will continue to be, an inspiration. 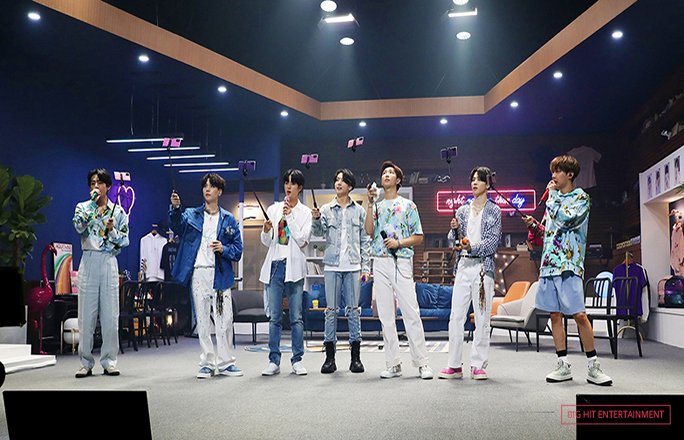 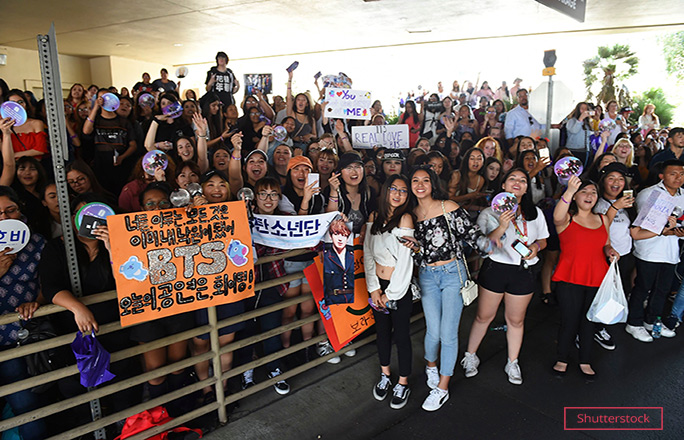 The septet has a strong media presence, and their ARMY is always ready to cheer for them!

Something interesting to note about the most Twitter engagements (average retweets) for a music group record, broken by BTS in 2019, is that they bettered their own record…four times!

They first established the record in 2017, when they registered the incredible amount of 152,112 engagements.

Their most-streamed tracks are two singles: their first English-language single "Dynamite" (829.7 M) and "Boy with Luv," featuring the American pop singer Halsey, which has now surpassed 1.3 billion views on YouTube.

However, in May 2021, their single “Butter” became the band’s most recent success to snatch a clutch of world records.

“Butter” is the most streamed track on Spotify in the first 24 hours, and marked the 23rd Guinness World Records title set by BTS – a mind-blowing number, especially considering the band's young age.

In total, with its upbeat rhythm and lush lyrics, “Butter” snatched five world records – and, to quote, we can say it was a success ‘smooth like butter’.

In the case of most viewers for the premiere of a music video on YouTube, one of the single’s many achievements, the band broke its own record, previously held by their single “Dynamite”.
The success of “Butter” was immediate, and no doubt amplified by the band’s significant social presence.

As of 27 April 2021, BTS’ tracks have been streamed 16.3 billion times on Spotify, taking the top spot as the most streamed group on Spotify, which had long been occupied by British band Coldplay.

Currently, the boy band counts more than 38M followers on Twitter and their single “Butter” placed first on the Hot 100 Billboard chart in July 2021. They are also the first and only K-Pop band to have a Twitter emoji – a bulletproof vest that was launched in 2016.

#BTS has its own Twitter emoji! 5 countries with the most amount of tweets will get their own special video message! pic.twitter.com/px85Ud8RDW 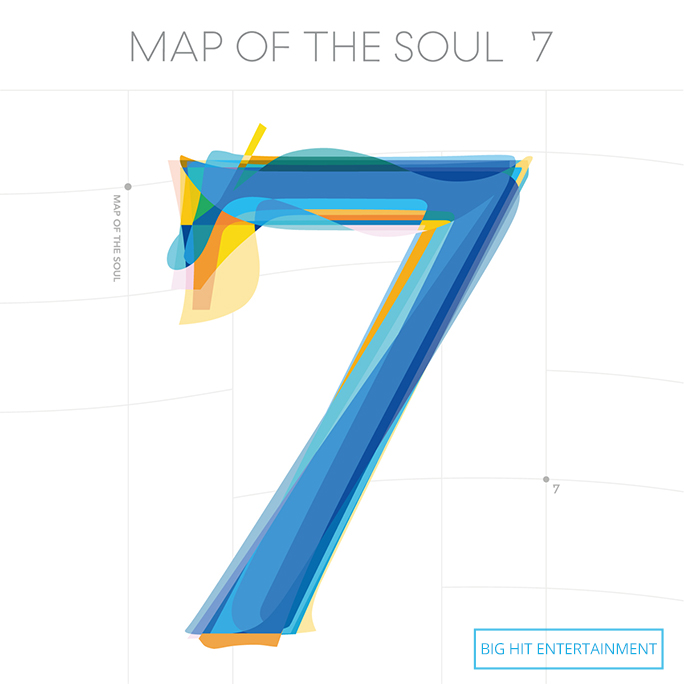 Ever since their debut in 2013, securing endless successes under their belts, these seven artists rewrote the rules of the music world.

What is most amazing, perhaps, is their capacity to do so while reaching an audience that vastly doesn’t speak Korean and is unfamiliar with the culture.

This capacity to communicate in a raw, pure way through melody, dance and lyrics that maintain their power even through cultural barriers proves that BTS are, indeed, worthy of their music royalty designation as the “Princes of Pop”.

But BTS’s cultural impact does not only revolve around music and is not only pop-flavoured – far from it.

The Love Myself campaign established the band’s partnership with UNICEF. As for the data reported by their website, the movement against children and teen violence at the moment counts 11,811,497 #BTSlovemyself campaign hashtags used.

Moreover, in 2018, BTS were awarded the 5th class of the Order of Cultural Merit, the Flower Crown, for promoting Korean culture.

Each member of the group also earned an award individually.

They became the youngest people to ever receive such recognition as cultural ambassadors.


BTS’ talent, relatability and diehard fans – but also their professionalism and unwavering commitment to social issues and worthy causes – have enabled them to reach heights never before touched by a K-pop band, or indeed many celebrities of any ilk.

Whatever the future has in store for Jin, Suga, J-Hope, RM, Jimin, V and Jungkook – and it’s a safe bet that will include a whole lot more records – the Bangtan Boys’ legacy in the pop culture annals is assured. 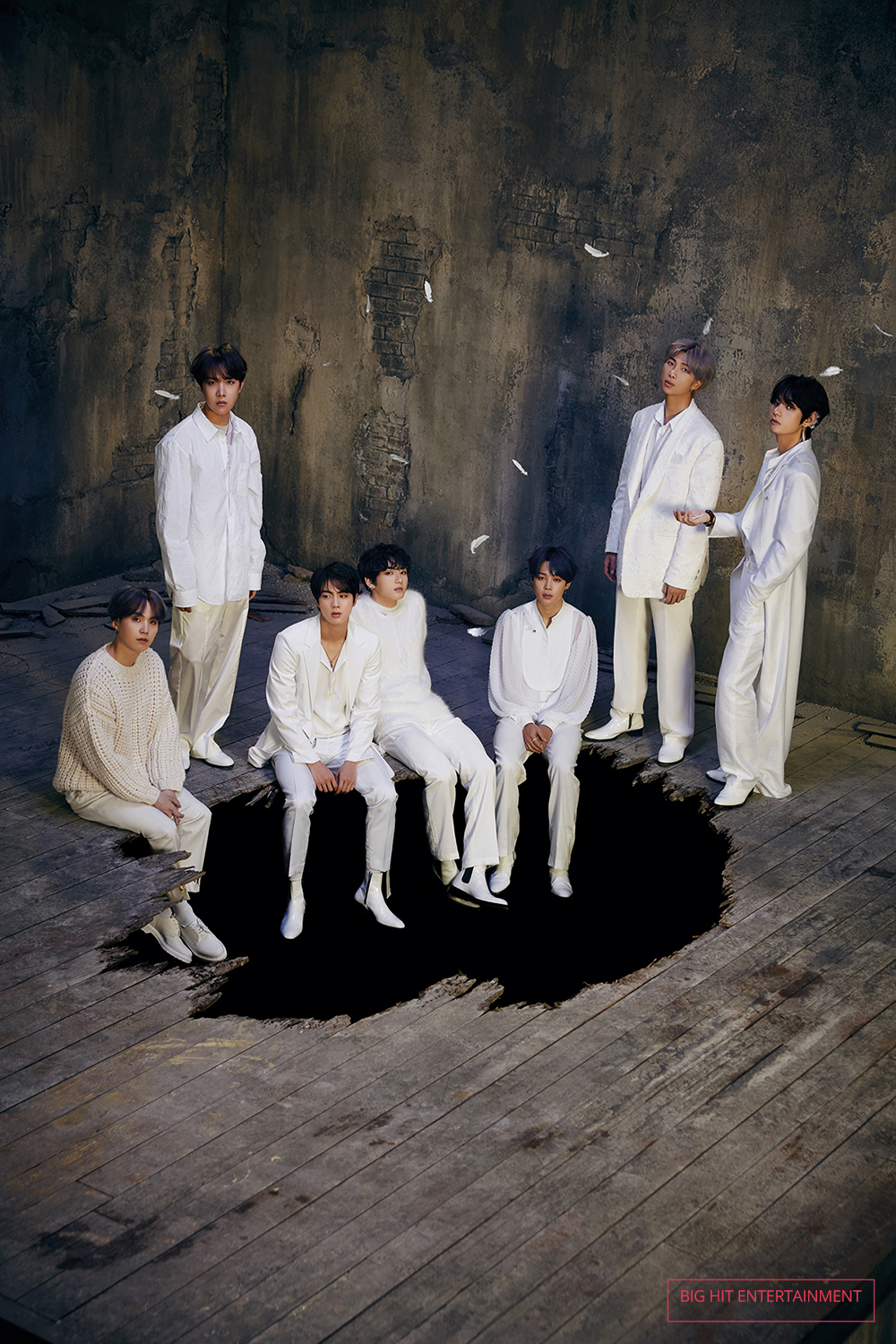 BTS' official MV "Dynamite" broke several records, which have been surpassed by the ever-strong septet in 2021 with their single "Butter". 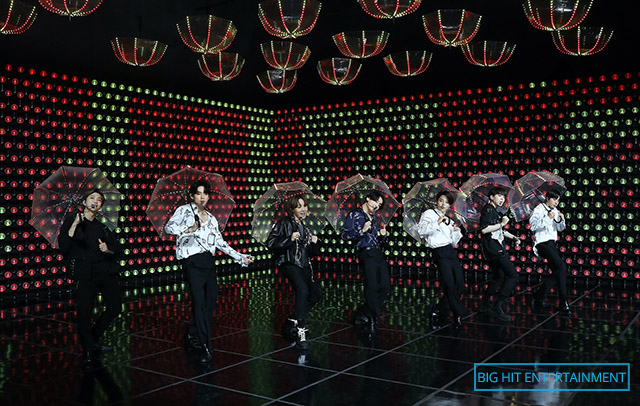 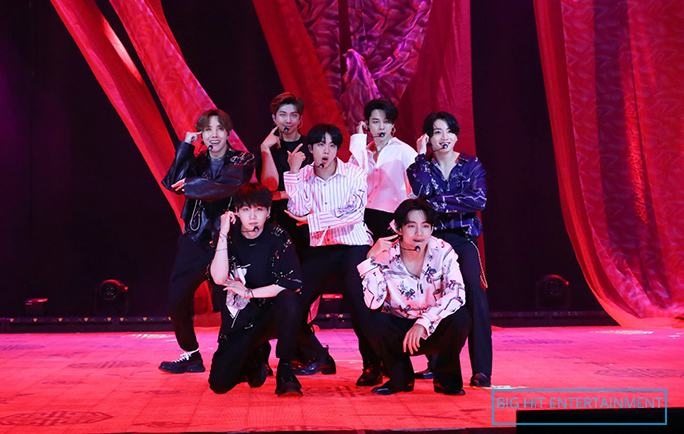 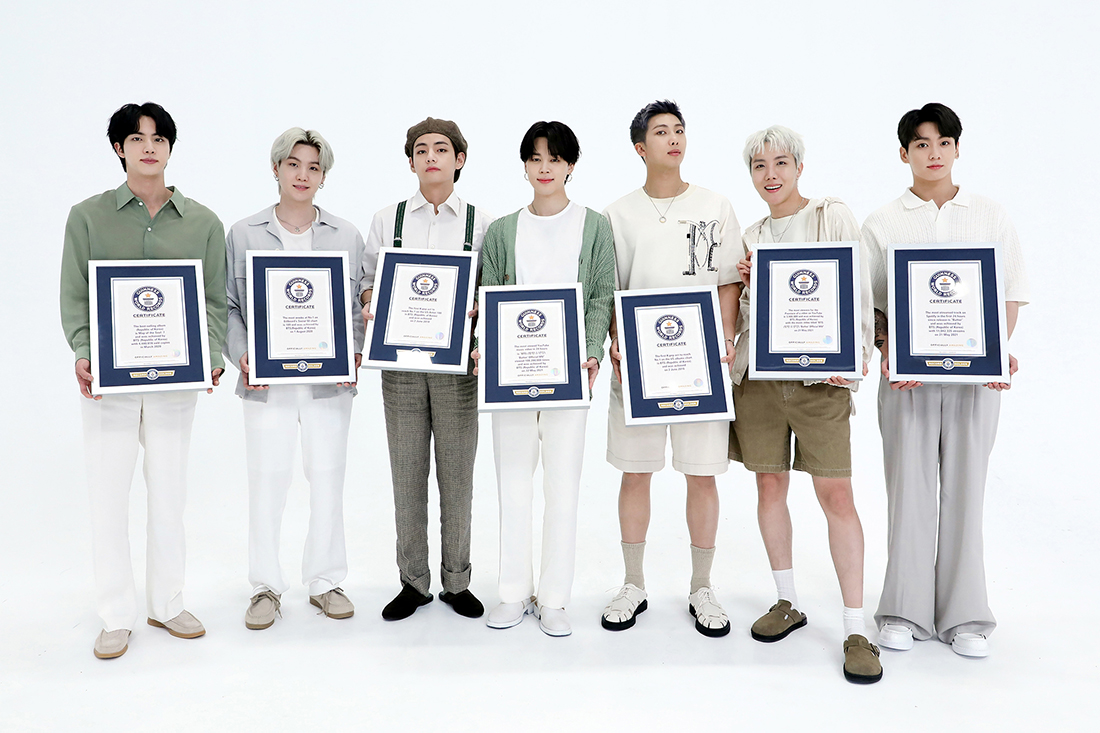 BTS appear in Guinness World Records 2022, out now in shops and on Amazon.