Women’s History Month: 4 Women who are making an impact in STEM

As we conclude our features for Women’s History Month, we are sharing with you the stories of some extraordinary women who have made a difference in the world of STEM.

STEM is a curriculum based on four foundation disciplines: science, technology, engineering and mathematics – and these women in particular have achieved inspiring success within these educational realms.

Whether it relates to animals, weather, or space missions that are out of this world – here are the honorable individuals that are breaking ground (and records) for women in science.

4-H alum and respected astronaut Peggy Whitson made history four years ago when she became the world’s oldest female astronaut at the age of 56 years and 282 days, still eager to take on missions sparked from her passion for science. Aboard a Soyuz MS-03 spacecraft, she and two other rocketeers launched, and headed towards the International Space Station (ISS) from the Baikonur Cosmodrome in Kazakhstan where they conducted a mission until May 2017. Peggy has had an adventurous and widely scientific career working as a US astronaut for NASA since 1996. Throughout her long-term career Peggy has put her doctorate in biochemistry to good use. She’s had two previous long stays in space, in 2002 and again in 2007, and even served as commander of the station, ultimately leaving a legendary trail for women in space. Upon ending the mission, she will have topped spaceman Jeff Williams’ record of 534 days spent in space; nearing a year and a half of her life in zero gravity. In addition to her being the oldest female astronaut, Peggy also has records for most spacewalks by a female at 10 and most accumulated time by a female with 60 hours 21 minutes.

In addition to her record-breaking work, and as a former 4-H member, she inspires the next generation of leaders to find a passion for STEM.Learn More

This everyday biology teacher went to great lengths to show her students the power of science through record breaking. Jessica Fain spent 73 days 2 hours 34 minutes living 7.31 m (24 ft) underwater in Jules’ Undersea Lodge, a steel-and-glass facility anchored at a depth of 9.14 m (30 ft) just off the coast of Key Largo, Florida, USA. Fain achieved her record for the longest time spent living in an underwater fixed habitat in a joint effort with biology professor Bruce Cantrell, who spent the time with her. The two scientists entered the underwater habitat on 3 October 2014 at 12:08 EST and left it on 15 December 2014 at 13:42 EST! During their stay, they hosted a series of weekly videos streamed on YouTube as part of an educational project about marine conservation and biology called Classroom Under the Sea. The precedent was set by a all-female team led by Sylvia Earle living under the sea in Tektite II in Great Lameshur Bay, St. John's Virgin Islands from 6 to 20 July 1970. 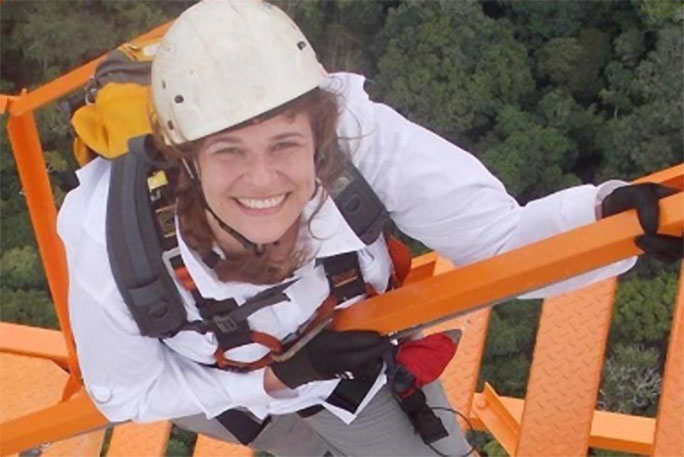 Dr. Albrecht is a lightning researcher who was part of the team which published the definitive ranking of lightning hot spots in the world. Thanks to this work we now know the location of the highest concentration of lightning strikes - Venezuela's Lake Maracaibo. Born and raised in Brazil she's pursued her childhood passion for science and weather, a childhood which includes memories of 'egg-sized hail stones' descending on her hometown a dramatic tornado. Her career has taken her thousands of miles from her family, and it's this which she says has been her biggest challenge.

"If I would pick an obstacle that I had to overcome, it was working in US for two years with no family around. I knew that was essential to have a successful scientific career, to build a network of international collaborations. So, I just faced the challenge, and here I am now."

Often referred to as "The Penguin Lady" Dyan deNapoli played a big part in a record-breaking rescue operation 20 years ago to save thousands of the penguins in the world’s largest penguin airlift in history. Some time ago, Dyan was a veterinary student who did a rotation working with penguins and fell in love with the species. Eventually she was hired where she interned at the New England Aquarium in Boston, Massachussetts, USA. Years later when she heard of the Treasure oil spill near Cape Town, South Africa in 2000, she was horrified as the oil spill was located between two of the three main breeding islands for the African penguin (Robben and Dassen islands), home to nearly half of the entire world population of this species. Based on the severity, it was clear that the size of this spill could have a tremendously negative impact. At the time, African penguins were listed as Vulnerable by the IUCN (they are now Endangered) and without human intervention the future survival of the entire species was at great risk. As a result, on the weekend of 1–2 July 2000 a total range of 15,000–20,000 penguins were flown to safety where volunteers (Dyan included) helped to de-stress penguins, clean each and every one of them, and released the ones that survived back into a healthy environment.