Skulptura Projects GmbH has created a castle measuring 17.65 m (57 ft 11 in) high in Binz, Germany, which was adjudicated on 5 June 2019.  The record was broken for the Sandskulpturen Festival’s 10th anniversary.

An international team of 12 sculptors and eight technicians from Russia, Poland, Hungary, Germany, Holland and Latvia created the huge structure in three-and-a-half weeks. There’s no internal structure supporting the castle up, and no additives in the water to bind the 11,000 tonnes of sand together.

The circular base diameter of the sandcastle measures approximately 26 m (85 ft 3 in). 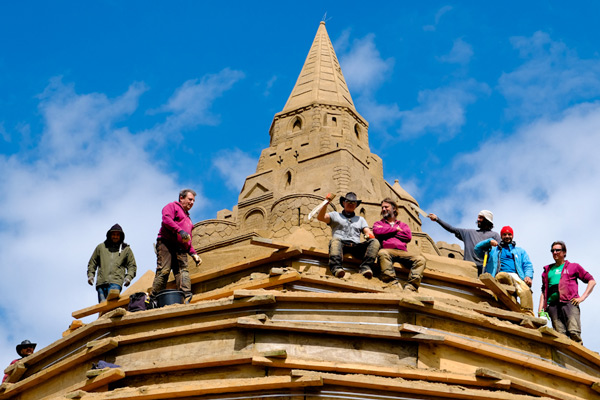 The attempt was led by Thomas van den Dungen, a sand sculpting enthusiast who has already been involved in three successful Guinness World Records attempts, including the longest sand sculpture and most sandcastles built in one hour.

Thomas said he’s had his eye on the tallest sandcastle record for some time and has now been able to break the previous record of 16.68 m (54 ft 9 in), achieved by Schauinsland-reisen gmbh in Duisburg, Germany in September 2007.

Dungen has been attempting this record attempt since 2017. In their first attempt the sandcastle disastrously collapsed three days before completion while protected shore swallows foiled a second record attempt last year. However their record-breaking sandcastle is still standing strong, forming part of an exhibition, "Best of: 10 Years Sandfest Rügen".