Two helicopters have towed a huge projection screen across the skies of Dubai in a record bid to help commemorate the founding father of the United Arab Emirates (UAE).

Wasl Asset Management Group, a real estate development and management company in Dubai, and Remarkable Media flew what is now officially the Largest aerial projection screen above Dubai on Monday 12 March which could be seen more than 700 metres away. 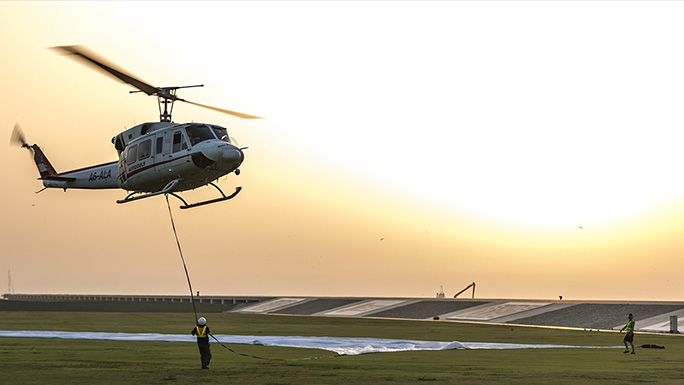 Wasl Asset Management Group breaks a @GWR title for the largest aerial projection screen, which took to the skies in celebration of the #YearofZayed. https://t.co/JCS1ffbPMQpic.twitter.com/RDU41rbENR

More screens were set up on the ground to allow the audience (from across the UAE) to track and watch the 90-minute journey of the projection over ‘dar wasl’ and ‘wasl 1’ projects. The record-breaking journey – which also marked the 10th anniversary of wasl Asset Management Group - included areas such as the Business Bay and Dubai Water Canal before ending in a skydive.

His Excellency Hesham Al Qassim, CEO of wasl Asset Management Group, commented: “We are delighted to have celebrated the ‘Year of Zayed 2018’ in a memorable and ambitious way that captures the late Founding Father’s pioneering spirit and strengthens Dubai’s reputation as a leader in achieving world firsts. We are also proud to have celebrated wasl’s Founding Day with a stunt that secured a new Guinness World Records title for Dubai, adding to its existing ones.”

Talal Omar, Country Manager of Guinness World Records MENA, added: “Dubai has set the stage for numerous record-breaking successes over the years and we are delighted to be to apart of the celebrations of another new Guinness World Records title by wasl Asset Management Group. It’s always great to see how the UAE celebrates its nations pride through continuous record-breaking events, and this initiative definitely stands out.”