Boeing celebrates its 10,000th 737 aircraft with a new record

Thousands of Boeing employees gathered at the company's Washington-based factory last week to celebrate the 10,000th 737 to come off the production line.

This particular plane was rather special as it helped the 737 set a new Guinness World Records title for the Most produced commercial jet aircraft model.

The model was a 737 MAX 8 made for the US-based Southwest Airlines.

"This incredible milestone is a testament to the work we do every day to build the most reliable and efficient single-aisle airplane in the world. It represents more than 50 years of success and achievement on the part of thousands of Boeing employees past and present, our supplier partners, and our airline customers around the globe who put their confidence in the 737," Boeing Commercial Airplanes president and CEO, Kevin McAllister.

This model previously held the record in 2006 when the 5,000th exampled rolled out of the Renton factory, a mark that took almost four decades to achieve.

Now, due to growing market demand and higher production rates, the 737 programme has reached the 10,000 milestone in just 12 years. 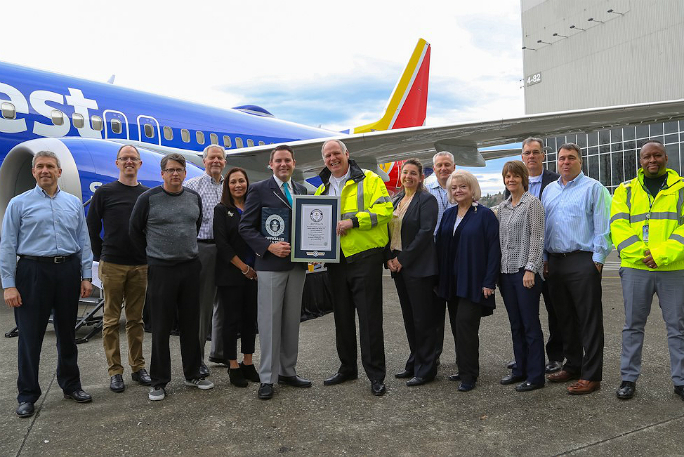 "The speed at which Boeing achieved this new milestone is very impressive. We are excited to once again recognize the 737 and the important role it plays in commercial aviation," Michael Empric, official adjudicator.

Boeing will increase 737 production from the current rate of 47 planes per month to 52 later this year.

Thus far the program has more than 4,600 airplanes still on order fueled by sales of the newest version of the 737, the 737 MAX.

We’ll see how long it takes Boeing to reach their next landmark!

Can’t stop, won’t stop. #Boeing will continue to deliver to our customers an aircraft that is more efficient, profitable and reliable. https://t.co/Of109ITfTH#10k737#avgeek@SouthwestAir@GWRpic.twitter.com/Yqd5mGrHCf