The Rave And Ride® event which recently took place at Stoke Park sporting and leisure estate, in Stoke Poges, UK, saw two incredible Guinness World Records titles achieved, including an impressive record for the Most money raised in 8 hours by static cycling. The ‘Fitness Festival’ raised a whopping £30,856 (US$44,446.50; €39,186.20).
Another record for the Most mechanical energy produced by pedalling on static bicycles in one hour was set with a total 8,369.8 watt hours achieved on 80 indoor studio bikes - almost doubling the previous record set by Britain Cycling's Breeze last year. 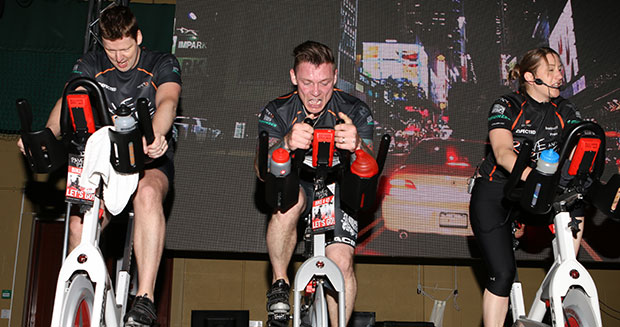 The record-breaking exercise event was held to celebrate a passion for dance music – headlined by chart-topper DJ Secondcity – and fitness, as well as to raise awareness and funds for the Motor Neurone Disease Association.
Official Guinness World Records Pravin Patel was on hand to verify the attempt and ensure that all the guidelines were adhered to.
Entrepreneur Steven Smith, who organised the successful attempt in honour of his mum - who he sadly lost to the disease - said: “After  19 years of raising funds for MND, I wanted to do a really massive event to raise awareness and additional funds to support a fellowship I sponsor at the MND research centre, Sir John Radcliffe Hospital , Oxford.  I felt with working with such a specialised and recognised  brand as Guinness World Records, it would get more people involved and help us to achieve raising considerable funds and awareness for this horrendous disease, which with you, we achieved.”