Three actors from The Reduced Shakespeare Company took on the in-flight challenge re-enacting an abridged version of complete works of Shakespeare lasting one hour.

The performance and record title attempt were part of a month-long campaign promoting a petition to make the 23 rd April National William Shakespeare Day. 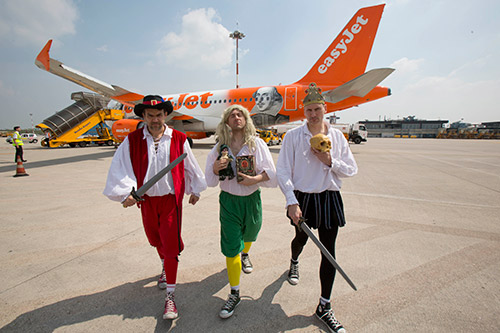 This included free performances of the playwright’s work at check-in desks, information in in-flight magazines and back of seat advertising promoting the best Shakespearean attractions in the UK. T

he in-flight record-attempt production was staged on a special edition EasyJet plane with a ten foot image of the bard on the fuselage.

At an altitude of 37,000ft the record attempt was a great success inspiring multiple spots of national press and TV coverage including The Daily Telegraph, The Daily Mail, BBC, ITV and numerous regional titles. 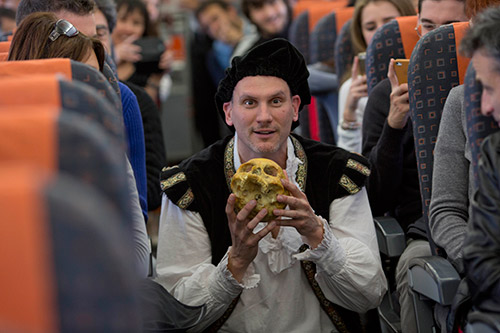 The petition for National William Shakespeare Day has been backed by Stratford-Upon-Avon MP Nadhim Zahawi and Bloomsbury Publishing and needs 100,000 signatures by the end of July to take the debate to the UK’s Parliament.

Paul Moore, Communications Director at easyJet explained, “William Shakespeare is Britain's most famous author so easyJet is proud to back the bid to make 23 April his national day. We are asking our UK passengers to sign the petition while suggesting to those from the rest of Europe that they visit the land of Shakespeare to learn more about him and see his works performed."