A charitable campaign across the Middle East aiming to set a new Guinness World Record for largest Donation of Toys in 24 hours title has ended in success for drinks maker TANG.

Working in partnership with non-government organizations, such as the Red Crescent in the UAE, Dar Al Atta'a from Oman, and ENSAN and KAFEL from Saudi Arabia, the campaign managed to collect and donate 30,000 toys, which will now be distributed to less privileged across the region.

The record was set with the help of participating children and parents who took part in the Tang “Do Good” regional campaign.

The initiative called for youngsters to participate by donating toys in different ways.

As well as being able to drop off toys in person at special TANG donation centers in local malls, donations could also be pledged via a special website.

The site allowed user to earn points by playing fun-filled games which could then be used to purchase a virtual toy. For every virtual toy donated, TANG purchased an actual toy and donated it to the agreed charities on behalf of the child.

The record was verified by Talal Omar – Country Manager MENA at Guinness World Records Ltd. who adjudicated the attempt along with colleagues in Saudi Arabia and Oman. In order to set the record, TANG needed to collect a minimum of 9 tonnes of toys over the course of a day, a target the campaign managed to beat in some style, with a final total of 20.71 tonnes (45,657 lb) collected over the 24 hour period. 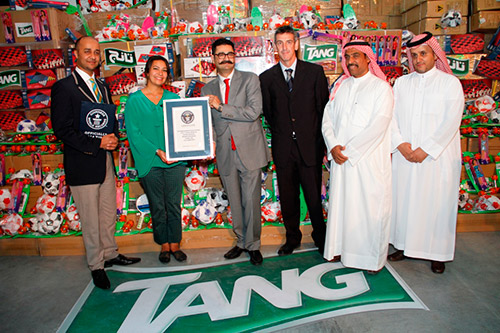 It marks the second record title achieved by the owners of TANG, food and beverage conglomerate Mondelēz International, following a successful attempt at the title for Longest line of sandwiches in Dubai in 2010.

Commenting at a celebration to mark the record attempt, Mr. Vishal Tikku – Area Director for Mondelēz International in the Middle East, said: “We are extremely happy to have created this World Record through one of our strong brands in this region – TANG.

"This is the second Guinness World Records achievement for Mondelēz International. Both these records have had a strong element of social relevance wherein the means to create these records have been donated to the lesser privileged.

He added: "We went a step further through TANG’s Do Good campaign and engaged our consumers to join the cause by contributing to the less privileged members of the community thereby making them agents of change.”