Toe-wrestling, mobile-phone-throwing, bog-snorkelling and air-guitaring… The pages of the Guinness World Records book have been filled over the past 64 years with all manner of unusual World Championships. Even the very first Guinness Book of Records back in 1955 featured the likes of competitive chair-rocking, lion-taming and pipe-smoking!

One of the more recent additions to the GWR slate is gravy wrestling – a sport that, as it sounds, pits fighter against fighter in a vast vat of the delicious brown liquid more commonly ladled over your Sunday dinner.

The competition has been staged in Lancashire, UK, since 2007, and thanks to its dedicated organizers is sufficiently well documented, making it an ideal candidate for Guinness World Records certification.

So, on 26 August, after a decade of reading about the event in newspapers, I decided to push the boat out and finally make my way north to the village of Stacksteads and the Rose ’n’ Bowl carvery to see the action first-hand. 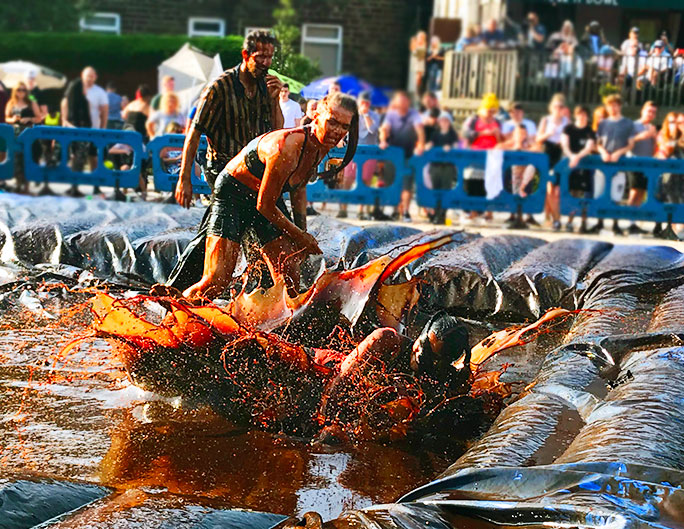 The rules are fairly straightforward. In a series of knockout rounds, men take on men and women take on women, wrestling for two gruelling minutes in a thickly padded paddling pool filled with cold gravy. Up to 2,000 litres (450 gallons) of the stuff is poured into the 4 x 4.30-m-wide arena over the course of the day, and competitors fight it out under the watchful eye of referee Stephen Claxon – a second-generation gravy-wrestling adjudicator who took over from his father Ken in 2015. “Gouging and drowning are banned,” he tells the competitors beforehand. 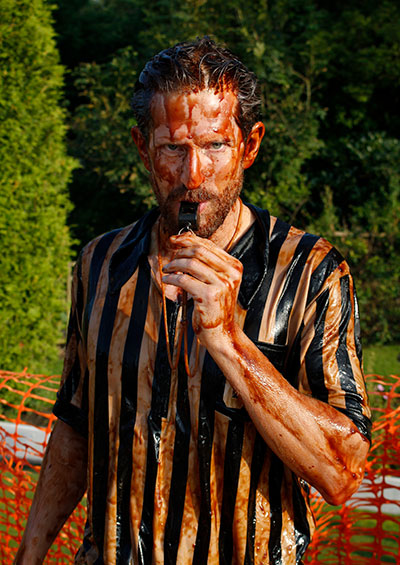 The invited judges are asked to pick a winner for each gravy bout. Their decision is based on the competitors’ wrestling ability, of course, but also (and more importantly) the quality of their fancy dress and the outrageousness of their crowd-pleasing antics.

The losers of each bout leave empty-handed while the winners are “anointed” by having a bucket of gravy poured over their heads. The eventual male and female winners walk off with a gleaming trophy; everyone, though, leaves with dried gravy in their ears. 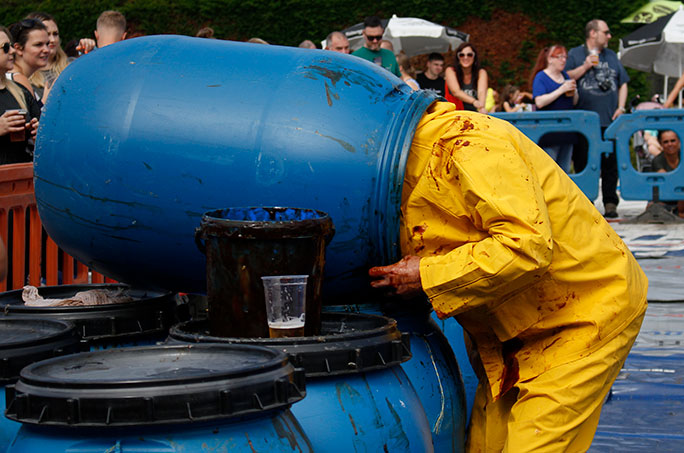 The gravy, made from a traditional local recipe, is supplied by the award-winning black-pudding-maker Andrew Holt (he really is invested as a Knight of the Black Pudding!) Holt ensures that the stock is at just the right consistency and that the levels are kept topped up at all times. “It can get slippery out there,” he explained. “But we’ve got first-aiders on the sidelines. Only a couple of people have been hospitalized!” he added reassuringly, referring to a nun and a goblin who ended up in A&E a few years back.

All this gravy-grappling is a messy affair. So much so that the local fire brigade volunteers its services to hose down competitors after each bout. “It’s a hard job but someone’s gotta do it,” said one fireman as he used his hose to blast the gravy off one of the finalists. The hoses come in handy for keeping the wasps at bay too, I noticed - they’re clearly attracted by the smell of the sticky brown gloop.

The 2019 competition proved to be an eventful – and record-breaking – event. Joel Hicks, a male model, actor and the most famous name in gravy wrestling, secured his record sixth win, having previously hoisted the trophy in 2007, 2009, 2011, 2015 and 2018, achieving the record for most wins of the World Gravy Wrestling Championships (male). Competing this year as the Bearded Lady and dressed in a fetching red corset, Hicks won despite – or perhaps because of! – a rather saucy wardrobe malfunction that left him briefly de-briefed; after recovering his errant trunks, he went on to win the men’s trophy for the sixth time, raising funds for his charity, Always With A Smile.

In the women’s category, two names stand out with a record two wins each: Emma Slater (2009, 2011) and Roxy Afzal (2017, 2018). Afzal – an NHS neonatal nurse who competes as “The Oxo Fox” – returned this year to defend her title but, despite a strong start, lost out in the semi-finals to newcomer Skye Penty, aka “Ronda Gravy”. Amazingly, “Ronda” – who takes her inspiration from the UFC fighter Ronda Rousey – managed to dislocate her shoulder during her tussle with “The Oxo Fox” but referee (and trained first-aider) Claxon was on hand to pop her arm back into place mid-bout! Despite the injury, she then went on to win her final match and take home first prize. Emma and Roxy share the record title for most wins of the World Gravy Wrestling Championships (female). 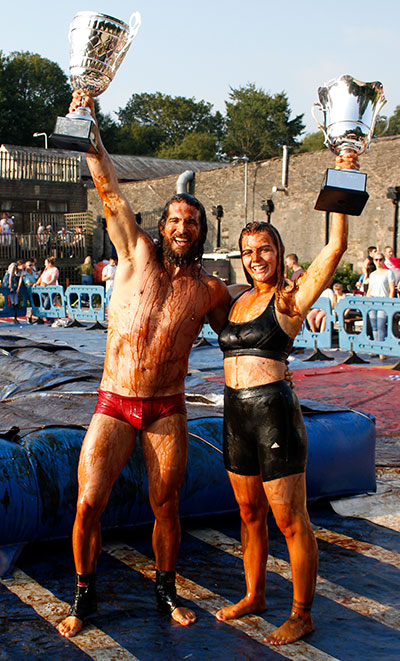 What started off as a small-scale fight in a car park in Wigan has grown to a huge spectator sport, and an estimated 1,000 people turned up this year to watch the festivities. It was a fun, family day out, helped by the fact that it was a gloriously hot Bank Holiday Monday.

Most importantly, the event raised thousands of pounds for the East Lancashire Hospice and a number of other charities nominated by the competitors. Those taking part often have good reason to raise funds, and many wrestlers this year fought in memory of family members lost to illness.

Food fights are surprisingly common around the world. The village of Coxheath in Kent, UK, is home to the World Custard Pie Championships; Ivrea in Italy stages an annual Battle of the Oranges (ouch!); in Galaxidi, Greece, you can take part in a yearly Flour War; and the largest food fight of them all is contested over in Spain, courtesy of La Tomatina, which sees the townsfolk of Buñol lobbing of thousands of tomatoes at one another for a reason that now appears lost in the mists of time.

Indeed, Spain would seem to have more food fights than any other country, playing host to battles involving everything from meringues (La Meregada in Vilanova i la Geltrú) and eggs (Els Enfarinats in Alicante) to grapes (La Raima in Pobla del Duc) and wine (Batalla del Vino in the Rioja region). ¡Buen provecho!