Over the years, Guinness World Records (GWR) has had the honour of meeting a wide variety of fantastic felines from the world's Oldest cat, to the Furriest to the cat with the Longest whiskers… (Here’s a small selection that we celebrated on 2017’s International Cat Day.)

But some of the most memorable moggies ever to have graced the pages of Guinness World Records have to be the Longest and Tallest domestic cats, one of which we’re excited to say has a new holder…

As with several GWR pet records, categorizing size by length is a relatively "new" way of doing things, with the first documented Longest domestic cat dating to the late 1990s. The debut holder of the title was a four-year-old cat called Snowbie from Scotland, UK, who was listed as 103 cm (3 ft 4 in).

Historically, GWR focused more on the weight of a cat to determine which was the biggest. For decades, the Largest domestic cat was a tabby called Himmy from Queensland, Australia, who weighed in at 21.3 kg (46 lb 15 oz) when he died in 1986.

However, GWR no longer recognizes weight as a measurement for domesticated animals, focusing instead on length and height. In case you were wondering, Himmy was noted to be 96 cm (3 ft 1 in) in length, so would have fallen some way short of the recently announced new holder (below).

It's a long story…

Meet Barivel from Italy. This "grande gatto" is the latest inductee to the hallowed hall of Longest domestic cats. When measured from head to tail tip on 22 May 2018, Barivel came in at 120 cm (3 ft 11 in). To put that in context, that’s longer than a baseball bat or equivalent to seven iPads laid out in a row!

Based in Vigevano, near Milan, this full-stretch feline lives with his owners Cinzia Tinnirello (below) and Edgar Scandurra (both Italy). In fact, he's a bit of a local celebrity as the couple sometimes take their pet out for a stroll in a buggy – a sight you’re not likely to quickly forget! 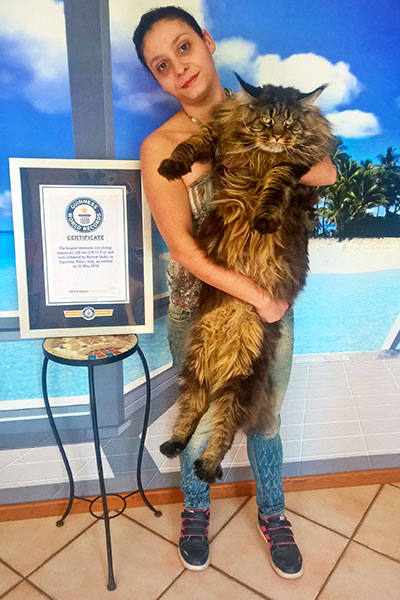 Barivel has something of a biological advantage when it comes to this record: he’s a Maine Coon cat. This particular breed – also known as the American longhair – has held the title of Longest domestic cat for almost a decade.

Other large cat breeds are ragdolls, Birmans and Norwegian forest cats – the latter of which are very similar in appearance to Maine Coons, so it's likely that the two share a genetic heritage. 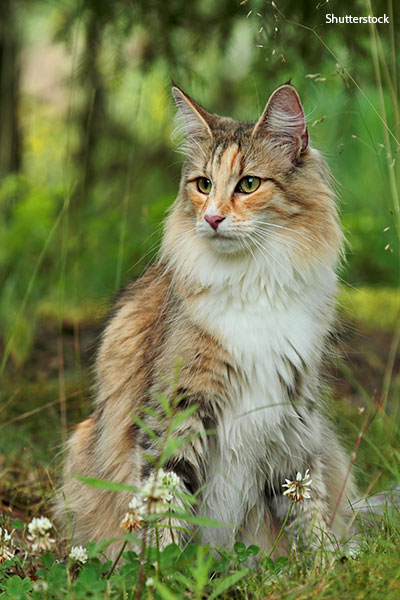 So why do certain breeds grow so much bigger than others and become the largest domestic cats?

Many think that it’s down to the part of the world that they originate. According to Bergmann’s rule, warm-blooded animals of the same species (in this case, Felis catus) generally increase in size at higher latitudes, as temperatures drop.

Also known as the square-cube principle, it reflects the ratio between bodily surface area and volume. Animals essentially evolve to be bigger in order to decrease their surface area relative to volume, thereby reducing heat loss in cold-climate habitats. It’s no coincidence that many of the largest cat breeds – such as Maine Coons from the most north-eastern US state and Norwegian forest cats from northern Europe – also sport long, thick fur for extra insulation.

Of course, it’s not purely down to Mother Nature. In domestic species, size is also (increasingly) down to strategic breeding, with particularly hefty specimens being favoured in order to normalize the trait of largeness across the breed.

"Some of the stories are based on fiction (e.g., a domestic cat bred to a raccoon – which is simply not possible). Other stories have a more solid basis. Those include Marie Antoinette sending her large pet cats over during the war. Those then mated with local cats and produced the large-bodied cat we now know as the Maine Coon.

"They adapted their physiology to deal with the harsh New England winters. They have thick coats, longer on their undersides and ruff to protect them from the snow, tufts of extra hair between their toes (so that it covers the bottom of the feet as they walk in the cold climate) and bushy tails that they can use as a blanket when they sleep.

"The Maine Coon was first documented in 1861. They were quite popular show cats (until the Persians came along). A brown tabby female named Cosie won Best Cat at the 1895 Madison Square Garden Show."

Moving to today, Liz continued: "In 2017, there were 3,021 Maine Coons registered with TICA, making it the third-most popular breed within the organization.

"Similar to large dog breeds, such as the Great Dane, the Maine Coon is bred for size, among other characteristics. All written standards for the breed indicate the body size should be medium to large. They should be broad-chested and muscular.

"The TICA breed standard also notes that an allowance should be made for females, who are smaller in size." 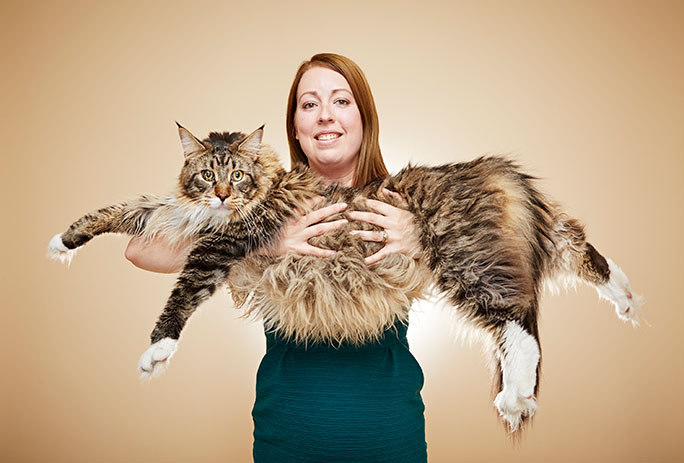 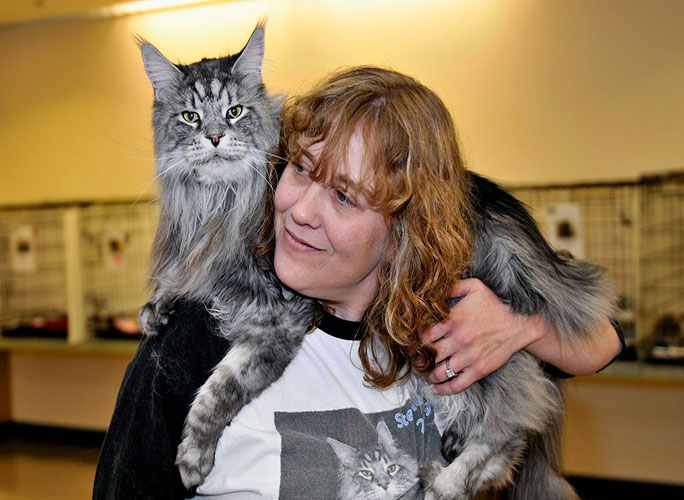 Getting back to the new record holder, though, perhaps the most remarkable thing about Barivel is that he was only two years old when measured. Given that Maine Coons can keep growing till around the age of four or five, this prodigious puss could be in with a real shot of the title for Longest domestic cat ever… Watch this space.

Long cats are only one half of the story, though… Did you know that Guinness World Records monitors vertically superior felines too? 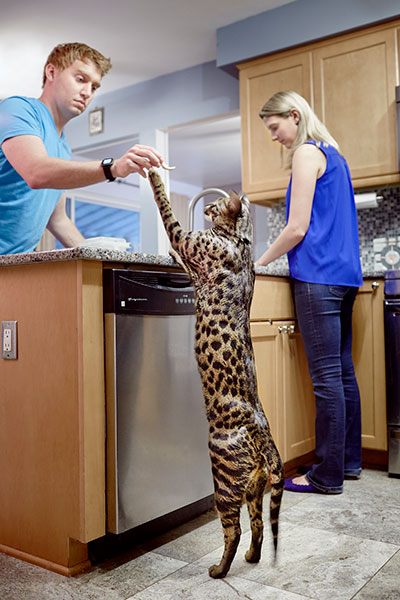 When it comes to loftiness, the all-time Tallest domestic cat ever measured by GWR was the 48.4-cm (19.05-in) Arcturus Aldebaran Powers who lived in Michigan, USA. His heroic height – measured from the ground to the withers (the ridge between the shoulder blades) – was verified on 3 Nov 2016.

Incredibly, a single record-setting pet wasn’t enough for the Powers’ household. Arcturus shared his home with Cygnus – a silver Maine Coon – who boasted the Longest tail on a domestic cat: 44.66 cm (17.58 in). You can see them both in the exclusive “Meet the Record Breakers” video below.

Tragically, both Arcturus and Cygnus died in early 2018.

Just shy of Arcturus in stature was the former holder, Savannah Islands Trouble. When measured in 2011, “Trouble” stood 48.3 cm (19 in) to the withers. 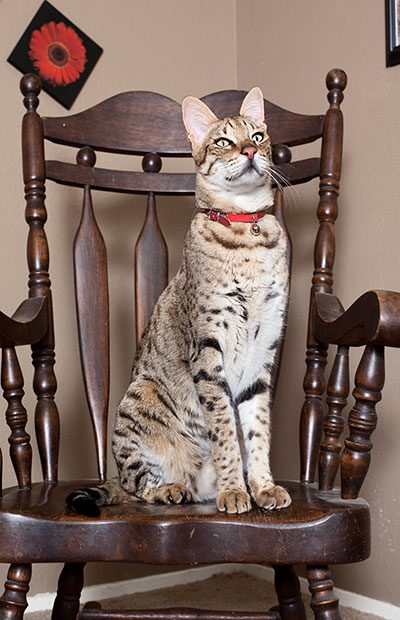 Guinness World Records is currently seeking a new holder for Tallest living domestic cat. If you think that your moggy could “stand” a chance at the title, then why not make an application?

Before rushing off to register your Munchkin (one of the smallest domesticated felines) as a contender, it’s worth noting that – as with the Longest domestic cat, this record has also become synonymous with a certain breed. However, this one is slightly more contentious.

The last three Tallest domestic cats – Arcturus (2016–18), “Trouble” (2011–16) and Scarlett’s Magic (2009–11) – have all been Savannahs. Where the controversy lies with this particular breed is that some cat fanciers (breeders) don’t recognize the Savannah as domestic, because they are a hybrid between house cats and wild African servals. Indeed, because of their heritage, some states in the USA have outright banned Savannahs, while in the UK, it's illegal to own a serval or an "F1" (first-generation) Savannah without a special licence. 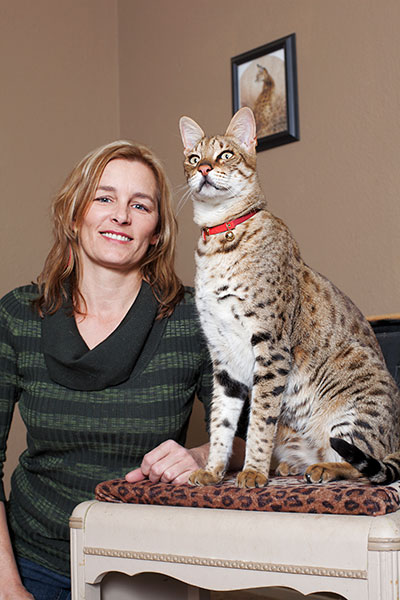 The first known Savannah was born in April 1986 – the result of a pairing between a female domestic cat and a male serval. The resulting hybrid kitten demonstrated a mix of domestic and wild traits. Many Savannahs are known for their dog-like qualities: they can learn tricks, go on walks on a leash and, in some cases, have an un-cat-like love of water.

Where it gets more confusing is that there are different "grades" of Savannah, some more closely related to their wild ancestors than others. An “F1 Savannah” is a first-generation offspring which has 50% domestic and 50% wild genes. An "F2", meanwhile, is the grandson or granddaughter of a serval, while "F3" Savannahs have a great-grandparent serval in their family tree – and so on. Without getting into the complex genetic percentage ranges, suffice it to say that genetically some Savannahs are more "domestic" than others.

TICA, whose lead GWR follows on this issue, has recognized the Savannah as a registered breed since 2001. Explaining TICA's stance, Brigitte Cowell – a member of the Savannah Breed Committe – told us: "[From our perspective] all Savannahs are domestic cats. TICA accepts the Federal definition on what makes a domestic cat. Until they are "F4", they cannot be considered 'purebred', which requires three generations of only Savannahs in the pedigree."

Brigitte rejects the view that Savannahs are more dangerous than other breeds because of their serval ancestry: "'Wildness' is something we Savannah enthusiasts consider a myth. The serval is regarded as the most domesticatable of the exotic cats, and most of the public consider 'wild' to be more 'feral' in behaviour and a Savannah certainly doesn't behave like a feral cat unless raised like one.

"They do, however, land on the high-energy and interactive end of the kitty spectrum!"

Of course, even record-breaking pet cats could never live up to their largest cousins from the Natural World in terms of size. 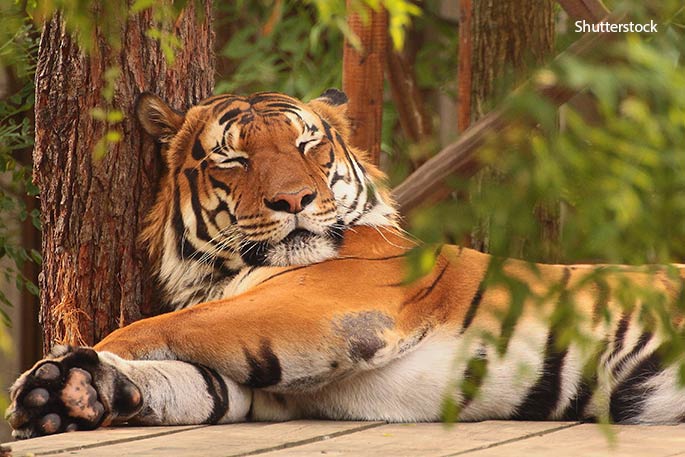 The Largest wild cats today are Siberian tigers, native to the boreal forests of Russia, China and North Korea. These powerful predators can reach in excess of 3 m (9 ft 10 in) from nose to tail tip and the heaviest individual on record – a male documented in Russia’s Alin Gory Mountains in 1950 – tipped the scales at 384 kg (846 lb). That's about the same weight as six adult men! 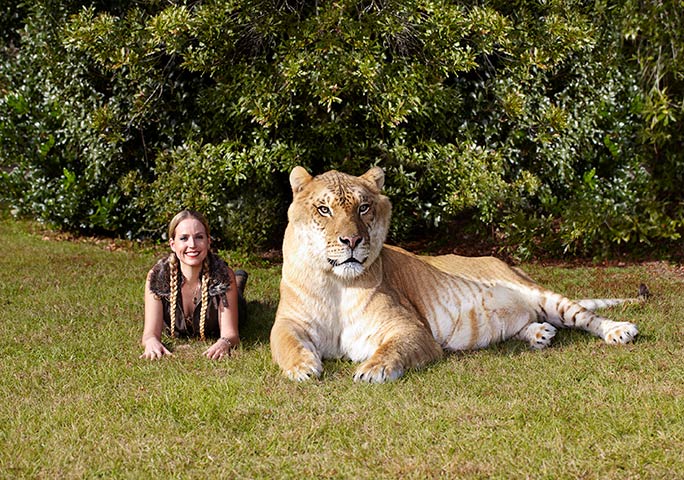