Christmas came early for the one and only Mariah Carey this year, who was presented with a Guinness World Records title this weekend for her festive international hit "All I Want For Christmas Is You".

On stage at her holiday show at the Caesar’s Colosseum in Las Vegas, Nevada the music star was joined on stage by adjudicator Michael Empric who celebrated her success in achieving the highest-charting holiday (Christmas/New Year) song on the Billboard US Hot 100 by a solo artist, which appears in the current Guinness World Records 2020 book.

During the certificate presentation, which took place on a jubilant and colorful Christmas set, audience members cheered on the glamorous singer-songwriter as she accepted the award for her record-breaking feat.

Carey smiled in a glittering outfit among her fans, thanking them for their support and enthusiasm. 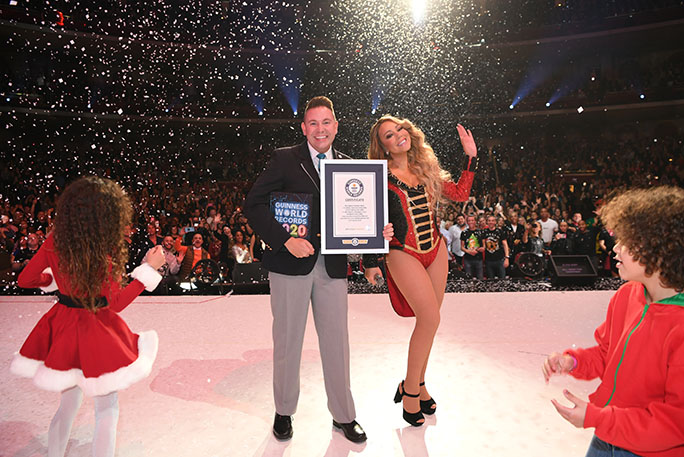 The popular holiday anthem "All I Want for Christmas is You" has been a sensational classic since it first debuted on 29 October 1994, as part of her first holiday album Merry Christmas.

It has become one of the best-selling and most recognizable Christmas songs globally, and features the traditional sounds such as handbells, piano, and the xylophone.

However, the most iconic instrument in the tune is arguably her five-octave vocal range, which is a feature that Mariah has been well-known for in her acclaimed music career.

Carey’s record-breaking single continues to set the bar for other holiday hits, which has also now earned the Guinness World Records titles for most streamed track on Spotify in 24 hours (female) (10,819,009 streams in December 2018) and most weeks in the UK singles Top 10 chart for a Christmas song (20) titles.

What makes this acknowledgment so special is the fact that is has been presented to the pop singer on the 25th anniversary of the initial release of "All I Want For Christmas Is You".

The song, written and performed by Carey, is now part of her Merry Christmas album re-released this past month with a special holiday deluxe edition of the now iconic album.

"We’re thrilled to welcome Mariah Carey into the Guinness World Records family through her incredible achievements for her hit single," said Guinness World Records adjudicator Michael Empric. "This song has become a holiday staple, and it is very fitting to recognize this iconic tune in the 2020 book on its 25th anniversary celebration.”