On Sunday, four runners from the thousands participating in the LA Marathon aimed to make history by attempting to break Guinness World Records titles. 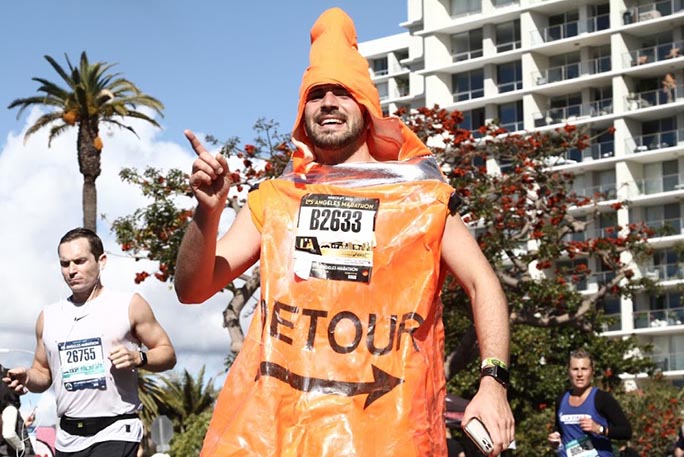 Rafael Sands began his running career at the age of 15, leaving that race feeling like he could accomplish things he previously thought he couldn’t.

Eight years later, he has not only completed the LA Marathon a total of five times, but emerged from this year's race as a victorious traffic cone with an inspirational story.

Just a year ago, Rafael was biking on the streets of Los Angeles when out of nowhere he was struck by a car. 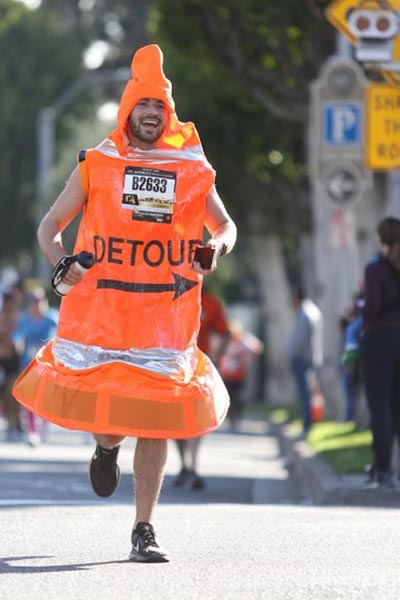 After regaining consciousness in an ambulance and being very frightened by the traumatic experience, he was very fortunate to leave the hospital after a one-night stay with very minor injuries and a newfound appreciation for how fragile life can be.

“As I was scanning the list of Guinness World Record titles in the marathon, the traffic cone immediately jumped out to me. First, because of my accident a year ago. And second, as someone who has lived without a car in Los Angeles (which is totally shocking to many), I have experienced so much anti-driver 'road rage' while getting around the city on foot and with public transportation."

“The marathon is one of the only days in the whole year the city is closed to drivers, and if anything I hoped my cone would send a message to LA drivers: slow down, you’re going to get there just fine, and if driving makes you frustrated and unsafe, try taking a different way there.”

Rafael typically prepared for marathons by training three to four months in advance, running 50-60 miles 5 days per week, but this time he had something extra on his plate.

For the record attempt, he also had to craft his costume as a traffic cone, which turned out to be a more extensive process than he anticipated.

“I started with a cone costume I purchased online. The costume was totally flimsy, however, and to meet the Guinness World Records guidelines I needed to create something that would be rigid and hold a cone shape for 26 sweaty miles. This is not to mention it had to go from below my knees to above my head AND be comfortable enough to run in. I spent many hours searching the internet for ideas on how to accomplish this, with little success.”

Shortly after he began stabilizing the cone with wiring, thick layers of fabric stiffener, papier-mâché, cardboard, duct tape, and hot glue. It was important that cone maintain it’s structure throughout the duration of the race to avoid interference with Rafael’s running.

The cone proved to be quite an endurance challenge for the experienced marathon runner throughout the race, since the rigidity made it difficult to move in and added a decent amount of weight that he was not used to carrying. 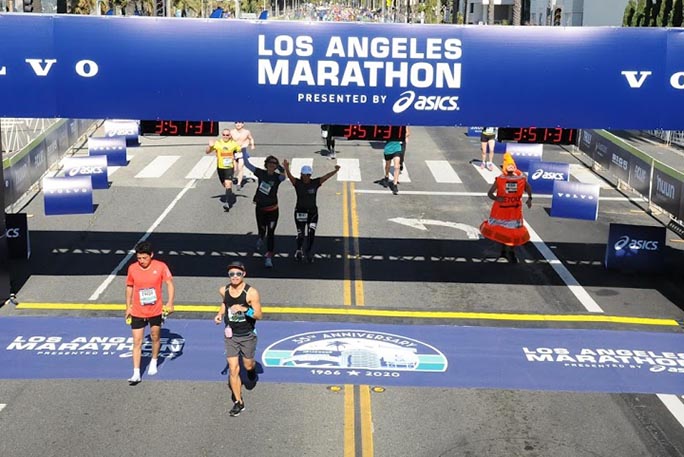 He even experienced bruising the next day! But nonetheless, persevered with a final time of 3 hours 45 minutes and 25 seconds at the finish line.

Throughout his athletic career, Rafael has run a total of 15 marathons but admits that each one always brings its own set of obstacles, including unique ones like running in an enormous traffic cone. 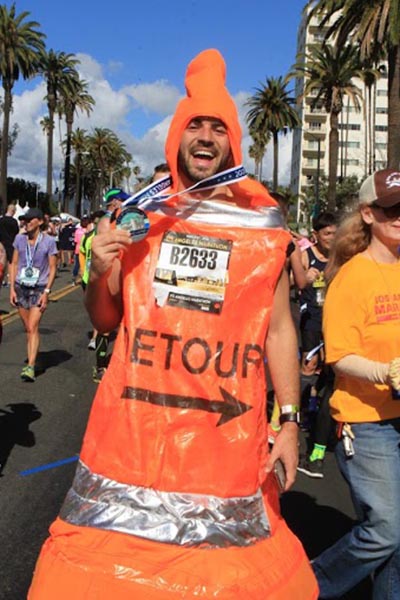 “Every time I do a marathon I am reminded of how conquerable many of life’s challenges are if you put your all into it. Pain, fear, self-doubt – all these are things that exist only within the mind. Practicing overcoming them in difficult situations we choose to put ourselves in can help prepare us for when we are put in situations not by choice.”

Now while Rafael figures out what to do with his traffic cone memento from this year’s race, he looks forward to recovering from his record breaking excursion and continuing to explore the beautiful city of Los Angeles by foot.

As someone who has overcome a great deal to be where he is today, Rafael has some advice for anyone who wants to pursue their dreams.

“I’d dreamed of having a record of my own since I first started reading the Guinness World Records books when I was 5 years old. I never thought there would actually be an opportunity in my life – and then there was one right in front of me. If it’s something you want to do, start doing research and get out there because it’s a lot closer than you think!”