Record-breaking highs and lows: meet the NASA astronaut that traveled to the deepest point on Earth

Dr. Kathryn Sullivan (USA) has always been fascinated by oceanography and adventure. Growing up, she loved the subject of Earth Science in school and dreamed of embarking on grand journeys like those of Jacques Cousteau and the earliest astronauts.

Years later, her voyages to space and, more recently in June 2020, the most extreme depths of the ocean, would make history, earning her three Guinness World Records titles: 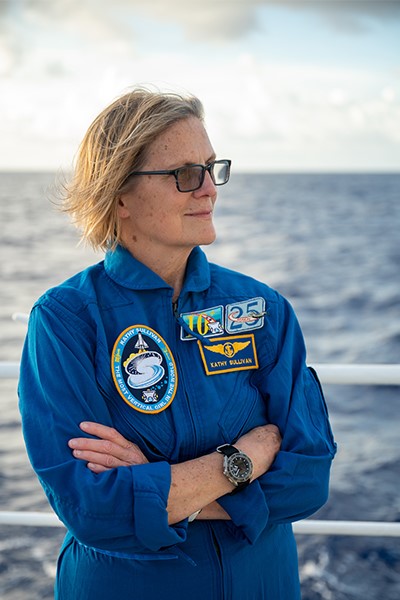 Purpose, curiosity, and a little bit of serendipity led her through an incredible career as a scientist and NASA astronaut.

She worked on various Space Shuttle missions including the deployment of the Hubble Space Telescope, served as an oceanographer in the US Naval Reserve, and notably took on the roles of Chief Scientist and later on, Administrator of the prestigious National Oceanic and Atmospheric Administration (NOAA).

Her aim throughout all of these roles was to understand how our world works and share insightful data to help sustain humanity and our planet.

Her latest adventure, a dive to the Challenger Deep, started as an invitation by fellow former US naval officer turned extreme explorer, Victor Vescovo, who himself has set multiple records as a result of his deep-sea voyages in the last few years.

Learn more about Victor and his expeditions

The first crewed dive to the Challenger Deep was completed by Swiss oceanographer Jacques Piccard and US naval officer, Donald Walsh, on Jan 23, 1960.

In late 2019, Victor invited Kathryn to join his Ring of Fire Expedition and dive with him to the Challenger Deep. One of his objectives was to bring oceanographic experts and other notable individuals to pivotal points in the world’s oceans.

After some due diligence, Kathryn accepted and joined the expedition. She was drawn to the concept of diving into the deepest ocean trench on the planet within the two-person deep-sea submersible, the Limiting Factor.

With Vescovo piloting the sub, Kathryn made her historic descent on June 7, 2020. With this dive, she became the eighth person to visit the "bottom of the world." 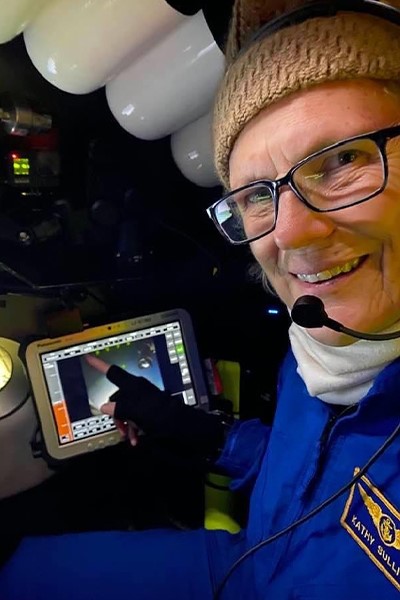 Read more about Jim and his journey

Given that Kathryn’s records center around the extreme highs and lows that she has reached in the name of both science and exploration, it’s fitting that immediately after her dive, she received a live call from the International Space Station, with congratulations on her achievement by fellow American astronauts Chris Cassidy, Doug Hurley, and Bob Behnken.

Kathryn is not only the first female to ever descend to the Challenger Deep, but her previous missions with NASA led her to two additional record-breaking milestones as the first person to visit space and the deepest point on Earth. Kathryn had a long-standing joke with her friends that she was the “most vertical woman in the world” thanks to her travels.

This joke became a reality when she received the title for greatest vertical extent travelled by an individual (within Earth’s exosphere), a staggering 622.085 km (386.546 mi) from the seabed of the Challenger Deep to the apogee of the STS-31 Hubble Space Telescope deployment mission in 1990. 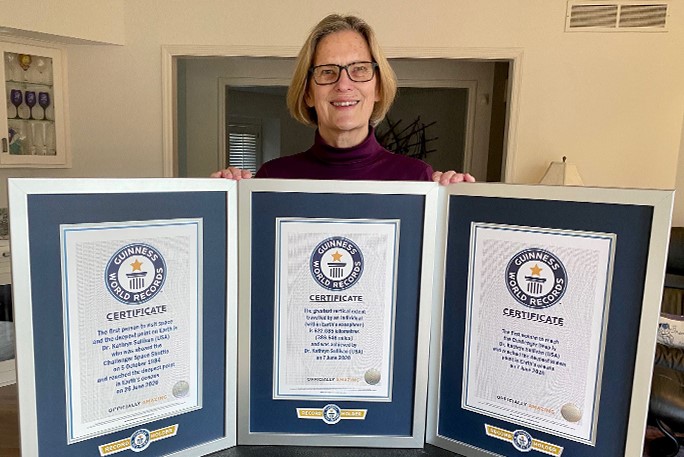 "Training for my spaceflights was vastly more intense and complex, both because I was responsible for the on-orbit operations of the Space Shuttle and our various cargoes and because things happen very fast when you’re travelling at 17,500 mph. I had to understand the shuttle and our cargo thoroughly and master routine and emergency operating procedures for both. The Limiting Factor submersible is certified for single-pilot operations, so only Victor needed that level of mastery. I just needed to know a few emergency procedures and how to operate the manipulator arm."

As a result of these experiences, Kathryn can confirm how interconnected all of our planet’s natural systems are, including the human ecosystem. She is working now to bring the impact of these expeditions and her findings to the public.

Kathryn and Victor are working with ESRI, an international supplier of geographic information system software, to build Story Maps around the Ring of Fire expedition and the Hadal Zone – the ocean realm below 6,000 metres (19,685 ft). 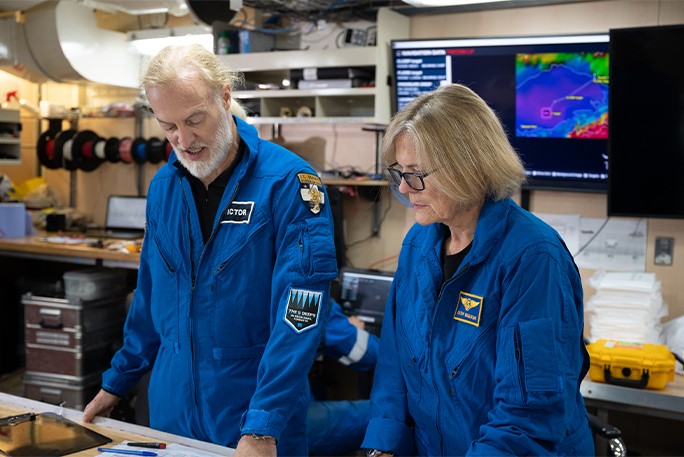 She is also creating informal science education materials with two non-profit organizations to help create a better understanding of how our planet functions and to inspire people to take better care of it.

"No matter where you live on this planet, your life is connected to the biology and chemistry of the Challenger Deep – and every other part of the ocean, for that matter. It is the main component in your life-support system, providing the oxygen in every other breath you take, moderating the climate and weather you experience and providing protein that is vital to you, your house pets and domesticated plants and crops."

As Kathryn puts it, "We need to live more wisely on this planet. There is no Planet B, as the slogan goes."