Featured in Guinness World Records 2020, he has obtained the following records based on the triumph of his latest two albums:

Born on 13 March 1992 in San Juan, Puerto Rico, to a Dominican father and Puerto Rican mother, Ozuna demonstrated a passion for music at age 12 when he began composing.

The songs written at that time were ones that ultimately led to his progression in dominating the Latin Music industry.

Ozuna has managed to reach this level of success after releasing only two albums, Odisea (2017) and Aura (2018). 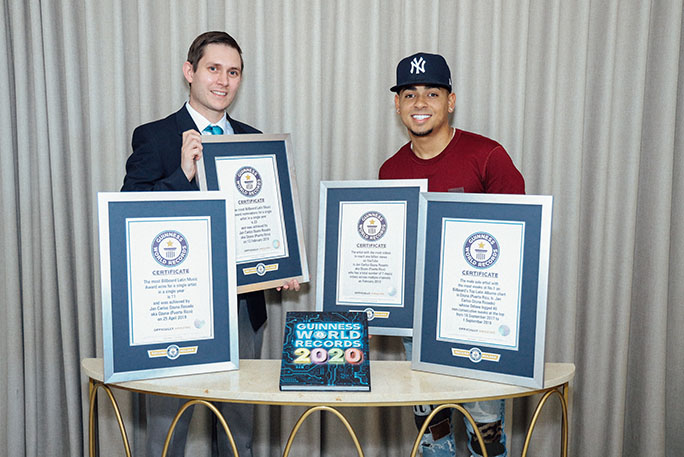 His next album, Nibiru, will be released in the next few days, potentially which could lead to more records for the singer in the near future.

Over the last two years, many of his records have stemmed from his growing popularity in Latin America, which have contributed to some of his nomination titles.

With several music video collaborations such as "Taki Taki" with DJ Snake and Selena Gomez, he has managed to flourish on YouTube as well as in the music industry.

Ozuna's dedication and talent for his music have ultimately shown fans that record-breaking success is possible with the right amount of passion.

"I feel honored to receive these [Guinness World Records] titles, which validates how hard we’ve been working for the past years. I dedicate this, first of all, to God, and to my fans from around the world, who have been there supporting me since the beginning of my career. I am thankful to Guinness World Records for this important recognition," he said.

In addition to his Guinness World Records titles, Ozuna stood out as the contemporary Latin composer of the year at the BMI Awards 2019 and topped the list of the 100 most influential people of 2019 in Time magazine.

His second studio album, Aura debuted at number 7 on the Billboard 200 list of all genres and remained at number 1 on the Top Latin Album list for 17 weeks.

As one of the most prominent artists in North and South America, we hope to see him obtain more record titles in the future.

Find Ozuna and other incredible celebrity music records in Guinness World Records 2020, out now in shops and online.