Video: Why a French winemaker ended up with the largest collection of jet fighters

Guinness World Records has been travelling around Europe filming some of the continent’s most astonishing record holders.

In Savigny-Les-Beaune, France, Guinness World Records’ video team paid a visit to winemaker Michel Pont, who has been collecting planes since 1985 and owns the world’s Largest collection of jet fighters.

The number in his collection has fluctuated over the years as items have been added or sold, but at the time the record was verified it stood at 110.

"I’m ex-military, from the Air Force in Dijon, so I had the opportunity to meet pilots and see the planes back them, that’s how I caught the bug," explains Michel.

"I started buying planes in France. In the military bases, when planes were declared unfit for service, they were put on sale. So, 30 years ago, I started buying these planes to save them from being destroyed."

He then widened his search and started buying planes from other countries such as England, Portugal and Russia.

"I travelled with a team of mechanics to buy the planes, dismantle them, rent a crane there, find a transporter and bring it back to France in pieces."

"My latest piece is a sabre – an American plane I bought in Sweden. We restored it, repainted it and make it all clean, just like new."

The planes he had never went to war, instead they were "instrumental to maintaining peace and protecting towns and civilians".

Michel keeps his collection at Savigny-lès-Beaune castle, in the Burgundy region, which he has owned for nearly 40 years. "When I bought this property, I could never have imagined that someday I’d be crazy enough to collect jet fighters!"

The surrounding gardens were wasteland when he bought the historic building, so he planted four hectares of vines to make wine and prepared 2-3 hectares for his planes.

Michel now gets around 35,000 visitors to the castle each year.

"All military bases in France are closed to the public, so this is the only place to see a wide variety of planes from all over the world." 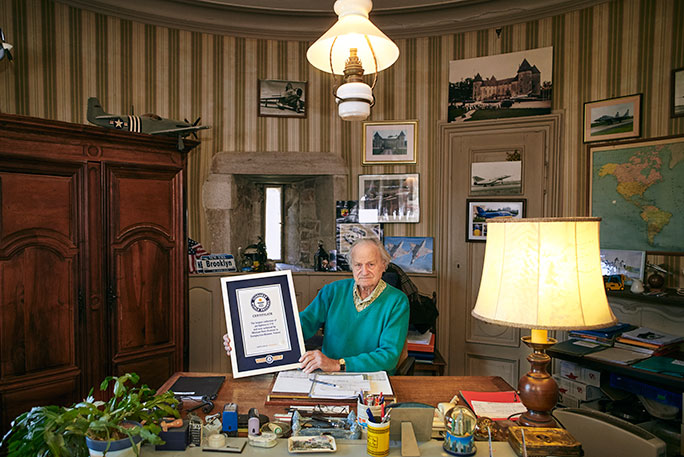