Brits Chris and Lisa Pitman are on a mission to become the 'world's most powerful couple,' by smashing their way through Guinness World Records titles.

The martial arts pros recently organised an attempt at Bishop Challoner School in Bromley, Kent, where they attempted the male and female records for the Most pine boards broken in one minute with one hand.

With an audience of pupils from their martial arts school, Virtue Taekwondo, the pair took on their most challenging attempt to date.

Chris was up first, using just one hand to break through piles of five stacked pine boards, and managed to snap an incredible total of 315.

Lisa followed, breaking through piles of three boards, and smashed a record-breaking 230 pieces of wood.

Adjudicator Jack Brockbank was on hand to officiate the two attempts and present the power couple with their Guinness World Records certificates. 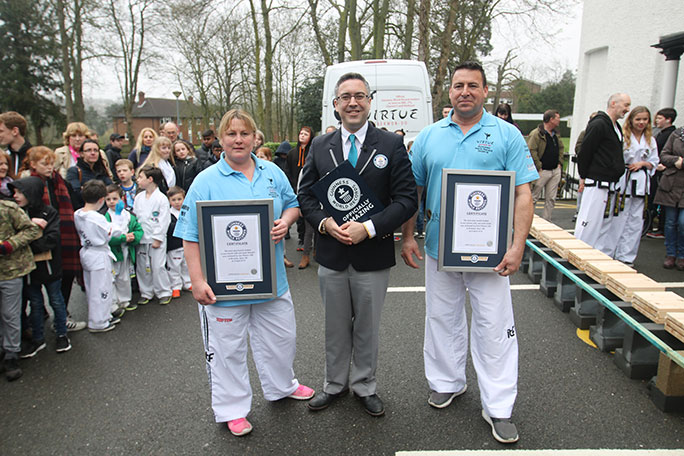 "It was five years ago today that we attempted our first Guinness World Records title, not really knowing what we were going in for. Anyone that says world records are easy – don't ever believe them!" said Lisa, who has been a taekwondo practitioner for 29 years and is the only certified taekwondo master in the UK.

"Our goal was always to set a couple's record," added Chris. "Man and wife holding the same record."

Chris started practicing martial arts seven years ago, when he met Lisa, and has since become a black belt.

Chris and Lisa also hold the male and female records for the Fastest time to break 1,000 roof tiles, with 51.08 seconds and 83.98 seconds respectively.