St Patrick’s Day: 10 of the best Irish world records... and some more for luck!

past years the date has seen a host of successful record attempts around the world including the world's largest Irish dance, largest gathering of people dressed as St Patrick and largest gathering of people dressed as leprechauns. In celebration of the nation where Guinness World Records can trace much of its roots, here are a couple of our favourites: 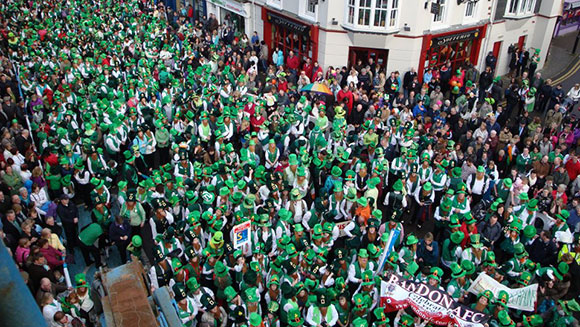 The largest gathering of people dressed as leprechauns was achieved by 1,263 participants in an event organised by Bandon Town (Ireland) in Bandon, Ireland, on 17 March 2012.

The largest gathering of people dressed as Saint Patrick is 882 participants and was achieved by Saint Brigid's National School (Ireland) in Castleknock, Dublin, Ireland, on 14 March 2013 (see photo at the top of the page). 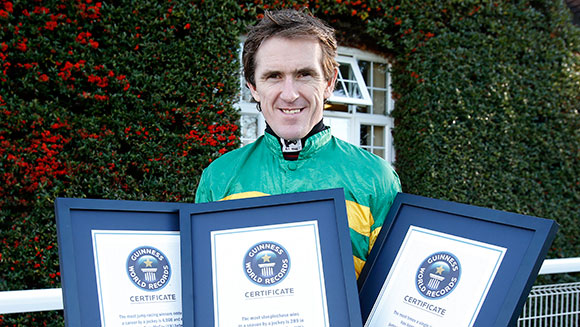 Among his many claims to greatness, AP McCoy holds the record for the most times a single jockey has been named jump racing Champion Jockey – 19 times between 1996 to 2014.

The largest Irish dance involved 10,036 participants at the Dublin Irish Festival organised by the City of Dublin in Dublin, Ohio, USA on 4 August 2007.

Also Eurovision hasn't been kind to Ireland in recent years, the country can still proudly hold onto this title.

The most 1-2-3 Irish dance steps in 30 seconds is 43 and was achieved by Ben Carolan (Ireland) on the set of 'Elev8' (for RTÉ) in Dublin, Ireland, on 3 August 2012. The record attempt was staged as part of a segment called '101 Things To Do Before You're A Teenager', number 1 of which was breaking a world record. 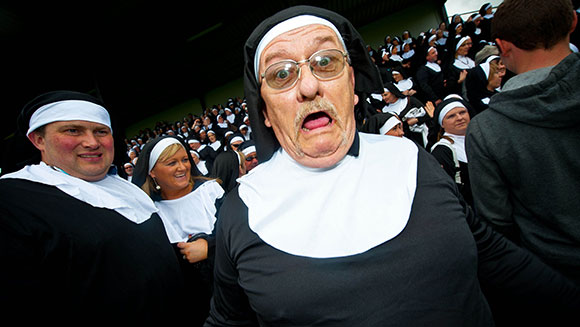 The largest gathering of people dressed as nuns was 1,436 and was achieved by Nunday Listowel (Ireland) in Listowel, County Kerry, Ireland, on 30 June 2012.

While we'd readily associate these records with Ireland, there are a whole host of records claimed by the country and its inhabitants that may come as a surprise. Here we list some of the lesser known record-breaking achievements associated with Ireland.

Irish singer/songwriter Enya, has sold 70 million albums around the world since going solo in 1988, despite having never performed a solo concert.

Between 1998 and 2000, Ireland also had the Largest tea consumption per capita with 2.69 kg (5 lb 14 oz) per capita, which is approximately 1,184 cups per person each year, before the country lost the record to Paraguay.

In 2015 Irish rugby fans helped achieve this record when Ireland played Romania in front of 89,267 spectators at Wembley Stadium in London, UK, beating the previous record of 89,019 set just days earlier when New Zealand and Argentina met at the same location.

One of Irish rugby's favourite sons also held the record for the Most international appearances in Rugby Union; Brian O'Driscoll turned out for his country 133 times and for the British and Irish Lions for a further eight matches between 1999 and 2014, bringing the total number to 141.

He held this record until New Zealand's Richie McGaw retired the  following year after playing 148 matches for the All Blacks.

The tallest windmill in the world is the St Patrick's Distillery Mill in Dublin, Republic of Ireland, now without sails. It is 45.7 m (150 ft) tall.

12. Largest gathering of people dressed as the Hulk

The largest gathering of people dressed as the Hulk was achieved by 574 participants at the Muckno Mania Festival (Ireland), Castleblayney, Ireland, on 13 July 2012.

A series of carvings on a rock at Knowth, in the valley of the River Boyne, has been identified as the most ancient Moon map discovered to date. It is estimated to have been carved around 5,000 years ago.