Monday Motivation: How a man and his dog set a paddleboarding record in Brazil

According to the well-known saying, dogs are "man's best friend".

While the phrase may hold true for several pet owners and their furry companions, Ivan Moreira and his Labrador Bono take it to a new level.

Growing up as an only child near the shores of Rio de Janeiro beach in Brazil, Ivan lived for the water.

His father taught him how to surf at the age of five, a sport that helped him master athletic fundamentals like steady feet, core balance and a goal-setting mind.

"I am a soul surfer and have always had surf in my life. I grew up knowing how to surf with any kind of board - small boards, long boards, paddleboards, but my favourite were the kinds that allowed me to surf big waves. I loved the sport so much." - Ivan Moreira.

Surfing eventually became a major part of Ivan's adult life, yet he always felt a degree of solitude and sought someone with whom to share the satisfaction that the sport brought him.

Despite the loneliness, it didn’t stop him from furthering himself as a surfer. 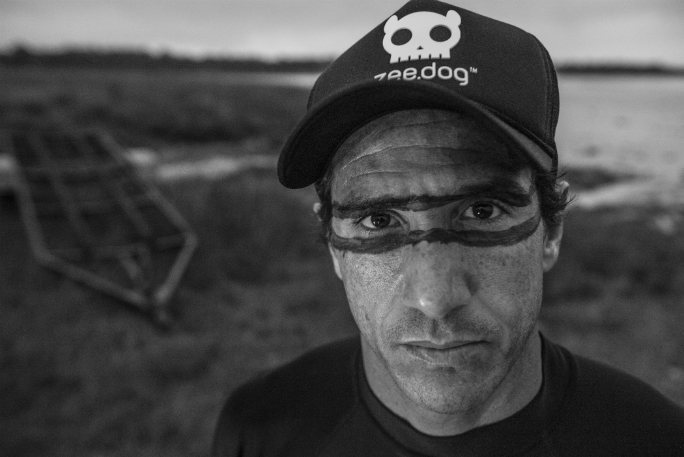 In order increase his knowledge in the field, he went to college to pursue a masters degree in physical education.

A few years later, on his birthday in 2010, Ivan’s then-wife gave him the gift of a lifetime: a spirited, chocolate-colored, blue-eyed puppy, named Bono.

"Everyone thinks he is named after the musician, but he is named for the Brazilian chocolate cookie. Bono joined our family when he was just 40 days old, about the size of my foot at the time."

Since Bono became Ivan’s dog, he followed him everywhere - including the beach. 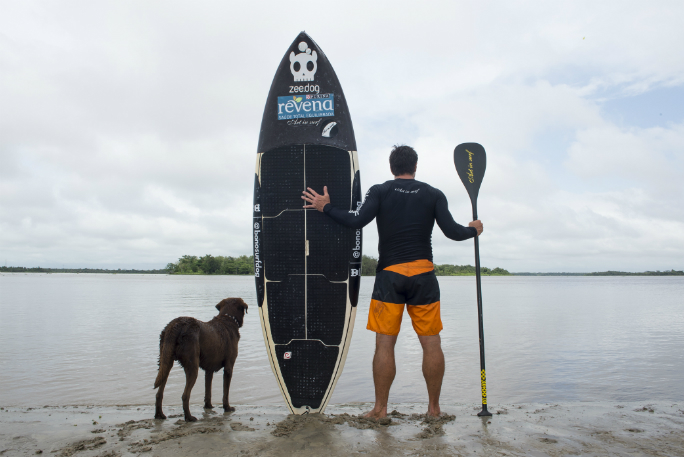 As the pup grew older he would watch his master ride unruly waves from the shoreline for hours at a time.

Often Bono was accompanied by a few of Ivan’s friends, who would take turns jumping into the surf to ride the perfect curl.

This went on for a few years, until Ivan decided to explore another realm of the surfing world: stand-up paddleboarding.

In Brazil, this was rarely practiced amongst the surfers in the region; who preferred traditional strains of the sport.

But Ivan, who conquered those early on in his life, was eager for something new.

The first step was a change in gear.

He purchased a stand-up paddleboard (SUP), which is much longer and wider than a surfboard, in order to help the rider maintain proper poise and balance for a period of time on a still current.

Ivan also needed a paddle to be able to move on the water’s surface - a very different way of travelling compared to surfing.

One day, when Ivan waded his new board into the water, he heard a splash behind him.

Bono had run from the beach where he usually waited and leaped into the ocean, pawing his way towards where his owner was standing.

"It was the first time I realised Bono could do something incredible. He jumped on the board which was already in the water and started to shake his tail and bark."

Much to his surprise, Ivan seemed to have finally found the surfing companion he had always been looking for – but this one had paws. 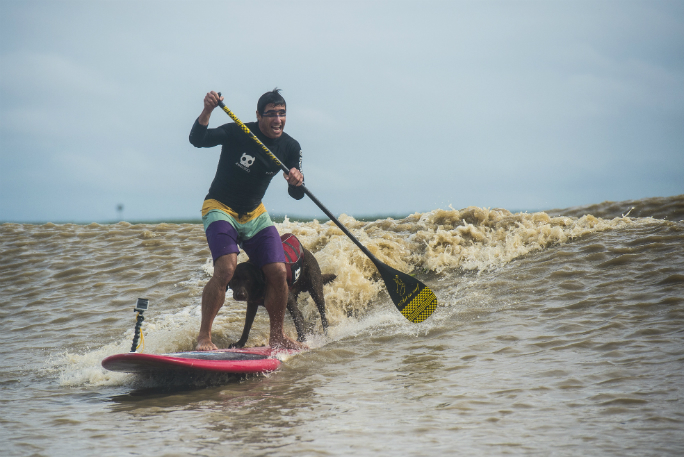 Ivan was shocked, but was keen to embark on a new adventure with Bono.

"At first, I didn’t really have a plan for how to train Bono to get his balance on the stand-up board. I had heard of dogs doing SUP but never thought that my dog would be one."

Falls, wipeouts and soreness were inevitable; Ivan was not only learning a new sport for himself, but also training his dog to be able to keep up with the roughness and unpredictability of the water.

Nevertheless, Bono kept up with Ivan, the two practicing seven days a week. 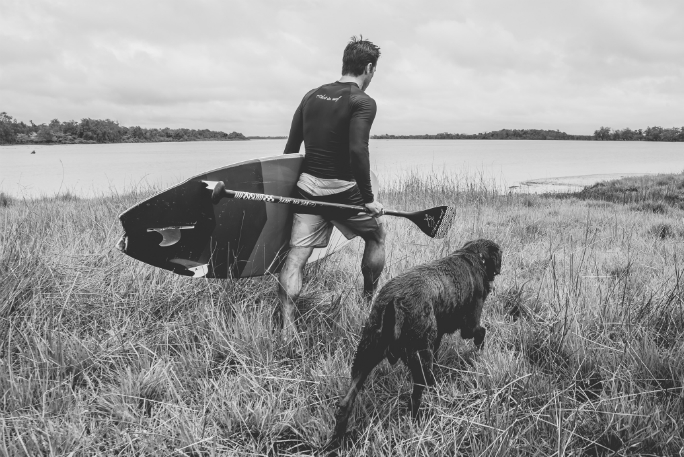 After few months, they switched from paddleboarding to regular surfing and the pair seemed unstoppable.

The long-time surfer had not only managed to teach Bono how to synchronise his balance with his own, but they were now taking on some of the toughest waves together – meaning that the next step was competing.

Given that there are not many human-dog surfing competitions in Brazil, both master and owner ventured to Huntington Beach, California – the utopia of surf.

Contenders in the tandem category of the 2014 Surf Dog Competition, Ivan and Bono went from being the only dog and human surfing on the shore, to being one of hundreds.

Despite the improbability of them placing, Ivan and Bono achieved first place.

They came back again for the 2015 competition, taking the top prize for a second time.

Once back in Brazil, Ivan and his incredible surfing dog had become national legends, known all over the massive South American country.

Having the contest not once, but twice, their next step was conquering the sport of stand-up paddleboarding, where they first began – with the aim of taking it to record-breaking proportions.

"Our relationship is beyond this world. Our goal was to make something could last forever, so we tried to set a record in the world’s most famous book, Guinness World Records, to eternally preserve our accomplishment in history."

Bono and Ivan rehearsed in several areas, with the intention of achieving the record for the Longest stand-up paddleboard ride on a river bore by a human/dog pair.

In order for the attempt to be successful, both dog and master would need to be standing for the entire time, which would not be a trivial feat on the lengthy river they decided to take on.

The day of the attempt marked a significant milestone for the Ivan and Bono, who had developed an incredible bond. 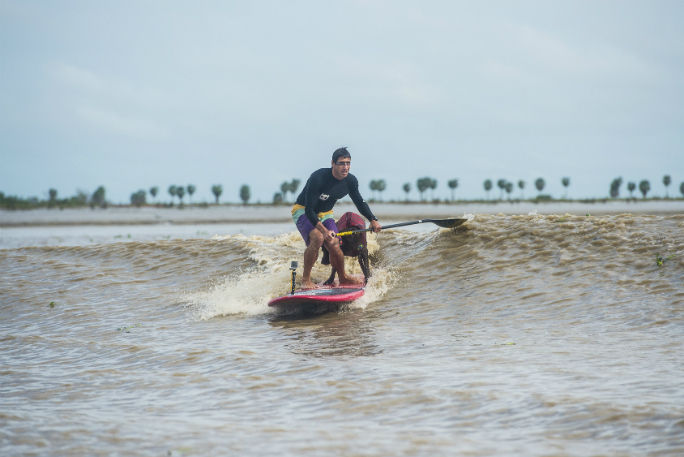 With Bono perched on the back of Ivan’s board, the two began their attempt, aiming to reach over a mile on the Mearim River, in Arari, Maranhão, Brazil.

It takes immense strength to stabilise a paddleboard on the current and propel forward, but in this case, the veteran surfer also had the added weight of Bono, making this a much more demanding attempt. 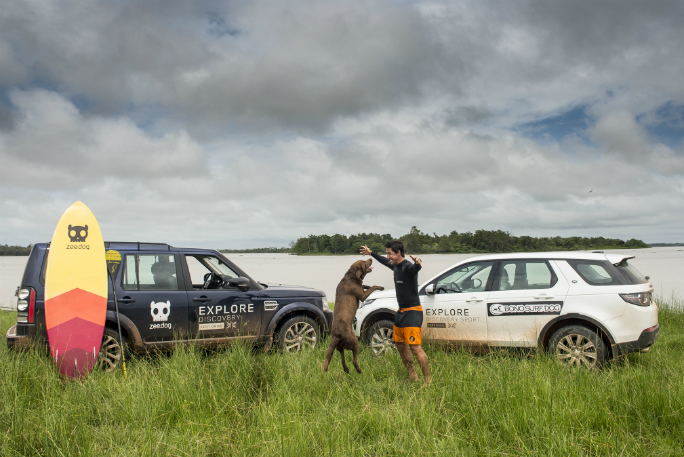 "After three minutes on the paddleboard, I started feeling my knees burning, but then I looked back and saw Bono’s face so happy and joyful. I forced myself to persist, no matter what."

That first time Bono jumped on the back of Ivan’s board had amounted to a final championing moment, as Ivan steered the board to the river’s shoreline, successfully completing a distance of 1,690.5 metres (1,05 miles).

Bono and Ivan had shared various experiences in their time together, but now they were official record holders. 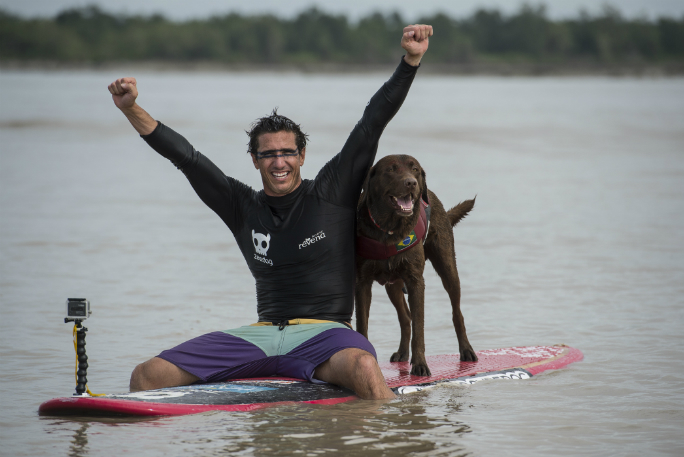 "I have no words to describe what I felt. It was a complete dream come true; we are very proud to be in the Guinness World Records book." 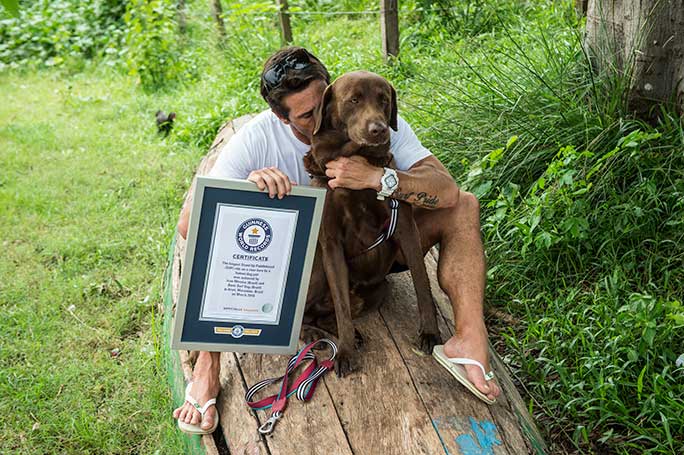 Since achieving their title, Ivan and Bono have continued stand-up paddleboarding, going on to new adventures and also trying new activities.

Together, they travel to visit sick children receiving cancer treatments through Casa Ronald MacDonald in Brazil and enjoy bringing smiles to those in need, the way Bono first did to Ivan years ago.

"Bono and I have learned life is too short to be unhappy, so if you have a goal, just move forward and for sure you will win. I want to inspire others." 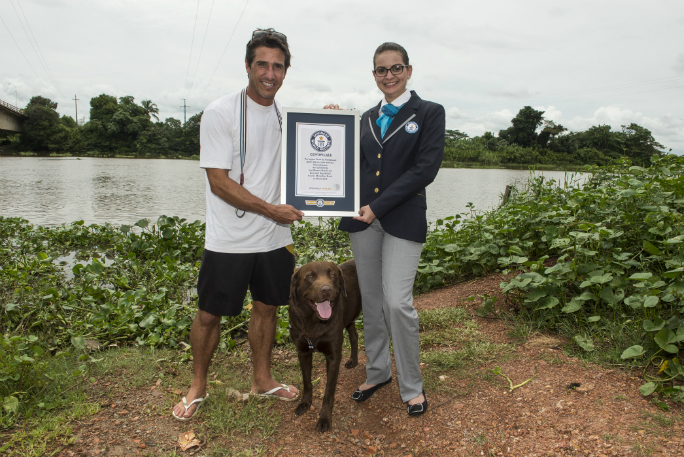