Today marks National Roller Coaster Day in the US and thrill seekers throughout the country will be getting strapped in to their favourite theme park rides to celebrate.

Guinness World Records has been documenting roller coaster records for decades, from the tallest and fastest to the most expensive – so to mark the special occasion we’ve created a list of the most jaw-dropping, scream-inducing roller coaster achievements to date.

Jack’s roller coaster of choice was the Twistosaurus in Flamingo Land, Malton, and he sat alongside his 56-year-old daughter Jayne, Good Morning Britain’s Kay Rickitt and Dr Hilary Jones.

“It were okay. I’m going for another ride in a minute!” Jack said after the attempt.

The Giant Drop at Dreamworld, in Queensland, Australia drops from a height of 119 m (390 ft), giving riders five seconds of free fall time before being brought to a halt by electromagnetic brakes. The ride, which is as tall as a 30-storey building, opened on 26 December 1998 and cost AU$12 million (£4.5 million or US7.4 million).

3. Longest marathon on a roller coaster

4. Most liquid retained on a rollercoaster using beer steins

Perhaps unsurprisingly, this is an unsuccessful attempt – but it remains one of the most popular roller coaster records on our YouTube channel.

Full Throttle at Six Flags Magic Mountain in Valencia, California, USA, has the tallest loop, at 38.75 m (127 ft 1 in). Its name doesn’t lie either: riders accelerate into the record-breaking loop at a fearsome 110 km/h (70 mph) and are turned upside down twice in less than a minute.

A group of 32 riders with an average age of 75.25 years were passengers on the Big Dipper at Blackpool Pleasure Beach, Lancashire, UK, on 24 September 2003. 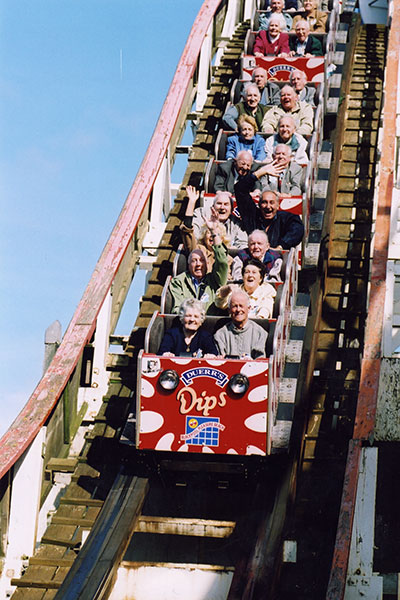 7. Most naked riders on a theme park ride

The greatest number of people to bare all on a theme park ride is 102, a record set by enthusiastic members of the public on the Green Scream roller coaster at Adventure Island, Southend-on-Sea, Essex, UK, on 8 August 2010. 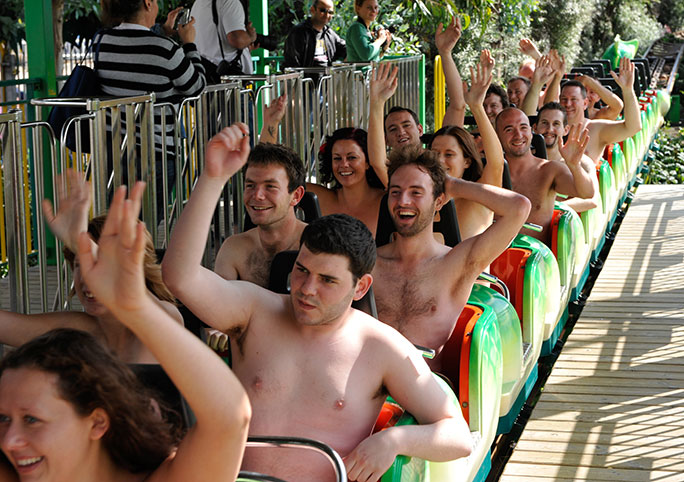 8. Most capital cities named in one minute whilst on a rollercoaster

The most capital cities named in one minute whilst on a rollercoaster is 27, achieved by Artjom Pusch (Germany) on the set of Guinness World Records – Wir Holen Den Rekord Nach Deutschland, in Europa Park, Rust, Germany, on 18 July 2012.

Expedition Everest was opened by Disney for $100 million (£51 million) in 2006 after six years of research and construction. The concept is a train journey through the Himalayas that uses a shortcut via Forbidden Mountain, wherein lies the fearsome Yeti - an enormous 6.7-m-tall (22-ft) audio- animatronic beast controlled by 19 actuators and covered in 93 m² (1,000 ft²) of fur. The ride is located at Walt Disney World Resort at Lake Buena Vista in Florida, USA.

10. Most roller coasters ridden in 24 hours 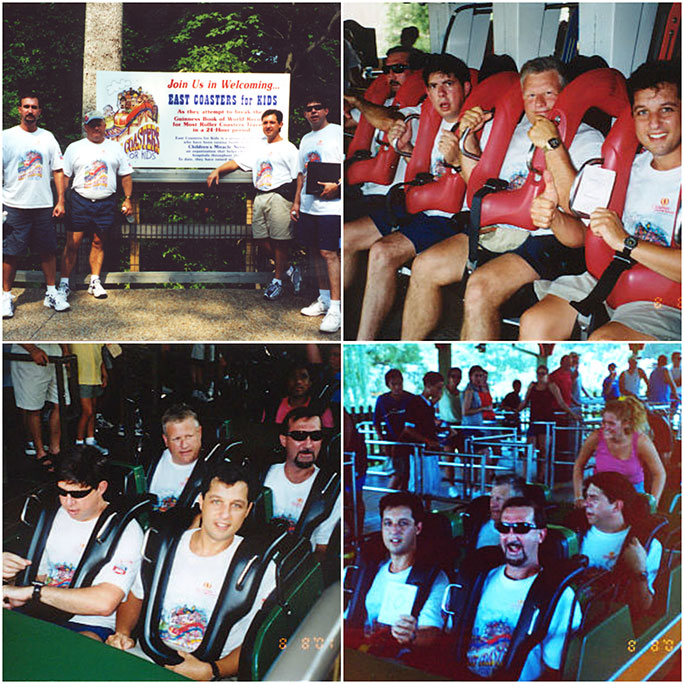 The greatest number of different roller-coasters ridden in one 24-hour period is 74. On 9 Aug 2001, Philip A Guarno, Adam Spivak, John R Kirkwood and Aaron Monroe Rye (all USA) rode cars in 10 parks in four US states, using helicopters to travel between them.