A year filled with game-changing Guinness World Records achievements is coming to a close, so we’re looking back at some of the most eye-opening, shocking and downright amazing records that were set in 2017.

Over the past 12 months we’ve seen incredible hairstyles, legs longer than you can imagine and record-breaking nails that were 20 years in the making, so this feature is all about human body extremes.

Longest fingernails on a pair of hands (female)

Star of Guinness World Records 2018, Ayanna Williams of Houston in Texas, USA, has been growing her nails for more than 20 years.

When Guinness World Records measured them earlier this year, they had a combined total length of 576.4 cm (18 ft 10.9 in).

News of Ayanna’s talons spread all over the world, inspiring conversation about how it’s possible to do everyday tasks.

"It takes me longer to do anything than it would take other people, because of the length of my nails," she told us during the photoshoot for the Guinness World Records 2018 book. "But they’re a part of me so they’re here to stay!"

In September, we were thrilled to welcome Ekaterina Lisina to the Guinness World Records headquarters in London to talk about her extraordinary legs and career as the world’s Tallest professional model.

"I’m really happy to have the longest legs in the world," she said. "I can walk much faster than other people."

Medical marvel Ahmed Saeed Mohammed Omar was awarded a certificate in July after he had a whopping 4.25 kg (9 lb 5.91 oz) non-functional kidney removed by a Dubai surgeon.

Ahmed was suffering from Polycystic Kidney Disease, but is now fully recovered.

Another incredible person who has made it into the Guinness World Records 2018 book for their achievements in 2017 is 84-year-old Jim Arrington from Venice, California, USA.

Though he might be a great-grandfather, nothing has stopped the retired sales and purchasing professional from bodybuilding for the last 70 years.

In total, he has competed in 62 competitions, of which he’s won an impressive 16.

Some stunning photographs of a Chinese lady with unbelievably-long natural eyelashes surfaced this year and amazed people all over the world.

Shanghai-born You Jianxia has a profusion of long and luxurious eyelashes, the lengthiest of which grows on her left upper lid and reaches a record-breaking 12.40 cm (4.88 inches).

"They are a part of my body, so I never find them inconvenient,” she says.

You Jianxia's incredible eyelashes have earned her a place in the new #GWR2018 book 👀 Read more > https://t.co/WWlKFbnypSpic.twitter.com/gbxjiQO4dG

It’s likely you’ll spot Benny Harlem from a mile away – not only because of his keen fashion sense, but for his sensational record-breaking hair.

With his striking hair do styled upright on his head, Benny has made his way into this year’s Guinness World Records 2018 book.

In order to perfect his 20.5 inch (52.0 cm) tall hairstyle, the model will sometimes shape and comb his hair for two hours!

Pick up a copy of Guinness World Records 2018 to find out more about incredible human body records. 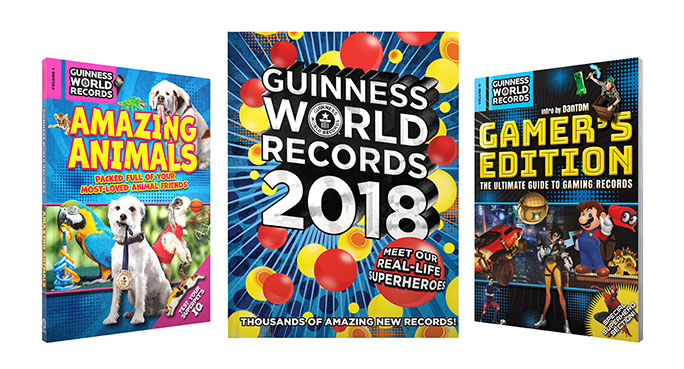