Thanksgiving: 10 records to discuss over your holiday feast

Thanksgiving marks the day that the first settlers in the USA peacefully broke bread with the native Americans back in the 17th century.

Since that first community dinner the day has become a traditional occasion for friends and family share each other’s company and eat heaps of plentiful food – replicating the initial feast.

In celebration of the event, we’ve put together 10 Thanksgiving record titles that showcase the wholesome holiday.

Recently achieved by Green Giant, this record is a massive version of a favorite Thanksgiving casserole.

Made with with 780 cans of Green Giant cut green beans, 53 cans of mushroom soup, 32 quarts of milk and 65 pounds of French fried onions, the dish was baked inside of Stella 34 Trattoria, located inside of Macy’s Herald Square in New York .

The jumbo sized serving came out to weigh an impressive 637 pounds, and was inspired by the 91st annual Macy’s Thanksgiving Day Parade (which also has a record).

Though it looked tasty, the entire plate was donated to Citymeals on Wheels, a non-profit organisation which prepares and delivers food for the housebound New York elderly in an act that truly embodies the spirit of giving!

US residents eat the bird each and every year, but do they know which breed is the largest in the world?

On the other hand, the Smallest type of domestic turkey is the midget white: adult males weigh around 6 kg (13 lb), with females at 3.5-4.5 kg (7-10 lb), making them only a little larger than the biggest domestic chickens. 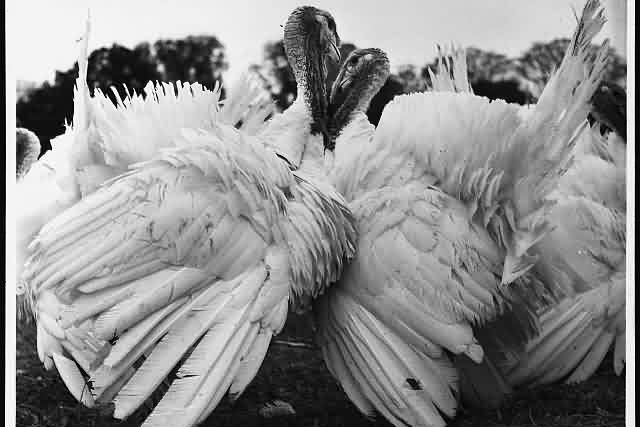 Many Americans already know that this holiday is a festive occasion to be spent with family, but has anyone’s gatherings ever been as large as the world’s largest family reunion?

Consisting of 4,514 people, the world’s Largest family reunion was achieved by the Porteau-Boileve family at Saint-Paul-Mont-Penit, Vendée in France, on 12 August 2012.

See if you can beat that total next year.

Fastest time to carve a turkey

The best way to start anything Thanksgiving-related is with the star bird himself, the turkey!

Ironically this record was achieved by Briton Paul Kelly in a time of 3 min 19.47 sec in Essex, UK. Paul went head-to-head against local butcher David Harrison in 2009 for an event to celebrate the 25th birthday of KellyBronze turkeys. 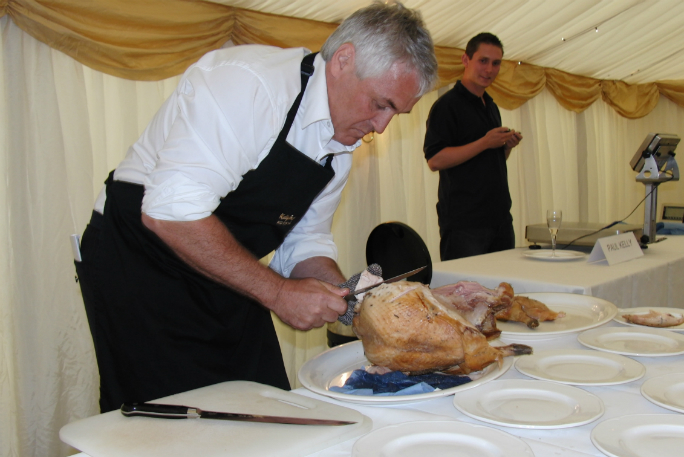 This is Paul's second record along with the Fastest time to pluck three turkeys; we know many could use his sharp skills at their dinner table!

Check out this record, a dessert made for the biggest of Thanksgiving dinners. The largest pumpkin pie weighs 1,678 kg (3,699 lb) and was made by New Bremen Giant Pumpkin Growers (USA) at New Bremen Pumpkinfest in New Bremen, Ohio, on 25 September 2010. The diameter of the pie was a whopping 6 m (20 ft). The crust took 440 sheets of dough to construct while the other ingredients used were canned pumpkin, evaporated milk, eggs, sugar, salt, cinnamon and pumpkin spice.

It is verified as the world's Largest inflatable parade, with many balloons of famous characters being touted by civilians through the streets of Manhattan.

On 22 November 2001 the famous parade celebrated its 75th anniversary, flaunting 30 of the signature, larger-than-life balloons to the millions of spectators lining the streets.

It’s become so associated with Thanksgiving, it’s hard to imagine celebrating without it.

If you like cranberry sauce, don’t let Andre Ortolf near your Thanksgiving table.

The German-born food editor can eat 500 g of cranberry sauce in a mere 42.94 seconds!

Andre has held this record since 2016, and in fact smashed his previous time of 1 min and 0.27 seconds.

Gamers might be surprised to know that they too play a major part in Thanksgiving, specifically in the annual televised Macy’s Day Thanksgiving Parade.

One of the most famous holiday events in the world, the 1993 event heralded a watershed when Sonic the Hedgehog became the First videogame character in Macy's Thanksgiving Day Parade.

While momentous, the debut did not go well: strong winds blew the giant balloon into a lamppost and punctured it.

Since then several other videogame characters have been featured in the American Institution. In fact, Sega's iconic hero made a return to Macy's Parade line up in 2011 to commemorate the 20th anniversary of the Sonic franchise, and was featured again in 2012 and 2013.

Most mashed potatoes eaten in one minute

Ashrita Furman has recently taken this title from known speed-eater Andre Ortolf. He consumed the Most mashed potatoes eaten in one minute at 909 g (32.06 oz), in Jamaica, New York, USA, on 7 August 2016. To calculate the final weight all excess mashed potato from the spoon and his face was deducted, but he still ate two pounds of potatoes!

To end our merry round up of records, we give you the record you might need most after putting up with extended family for more than six hours: the largest bottle of wine. 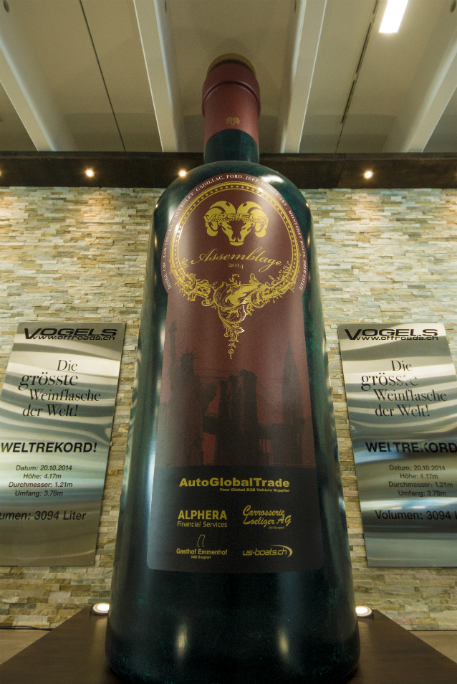