What better way to celebrate Guinness World Records Day than with an enormous cake?

The sweet treat weighed in at a whopping 462.4 kg (1019 lb 6 oz), as confirmed by official Guinness World Records adjudicator Pravin Patel, who was invited along to verify the achievement.

In order to break the record, the semolina cake had to contain no animal products whatsoever.

At a vegetarian school kitchen in Stockholm, the cake was created in 5 kg slabs and then baked 10 at a time. The 56 sections were then joined together with frosting.

There was a worrying moment when the team thought they didn’t have enough ingredients to complete the attempt.

"When we had baked three quarters of the cake, we realised that we needed more yoghurt and semolina," explained Therese. "After some seconds of panic, we decided that we could not give in now, after so much work. We gathered strength and made some urgent phone calls to get more ingredients sent to us. We made it and the ingredients reached us 30 minutes later."

The recipe for success contained a staggering 44.5 kg sugar, 3.56 kg flour, 62.3 kg semolina and 89 kg soya yoghurt. The cake was then topped with 26.7 kg whipped soy cream and 35.6 kg strawberries – among many other ingredients. 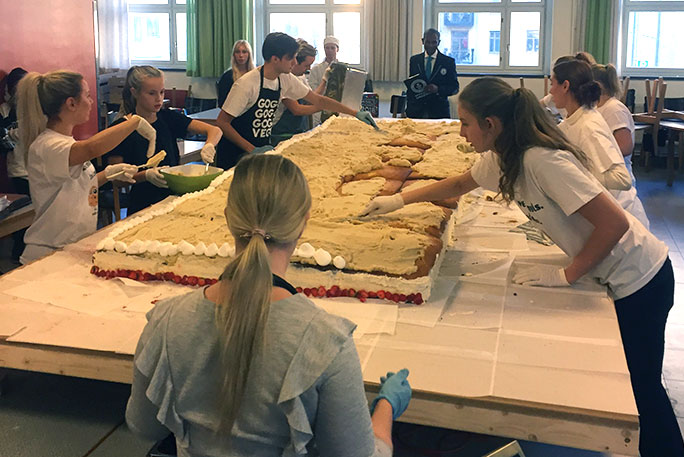 Therese – who boasts over 500,000 subscribers on her YouTube channel – took on this challenge to create awareness about veganism.

After the attempt, chefs and guests were able to get their fill of the cake, before the rest was boxed up and refrigerated so that it could be distributed at an animal rights meeting the following day. Approximately 2,000 people managed to get slice!

"To break a Guinness World Records title has always been on my bucket list - and now I've done it! I'm a vegan myself and by breaking the largest vegan cake record title I want to put focus on animal rights, a cause that is very close to my heart," – Therese Lindgren. 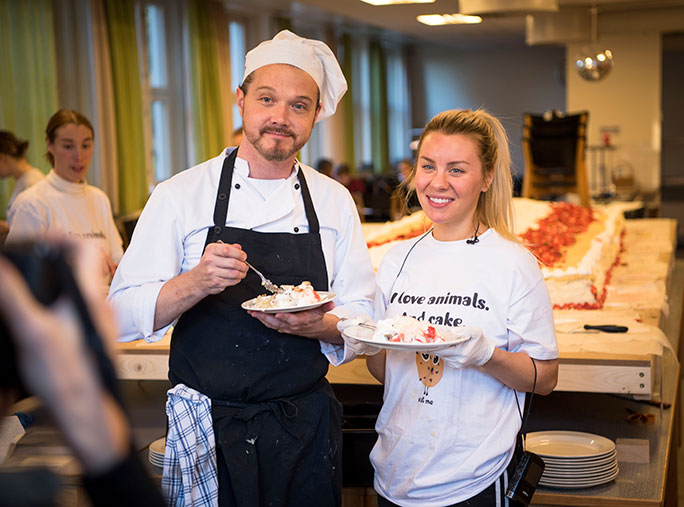 If you like this record, be sure to check out our top 10 plant-based achievements list that was published on World Vegan Day earlier this month.

As many as 600,000 other Guinness World Records title hopefuls from across the globe will be taking part in GWR Day 2017. Some incredible records will be rolling in from the USA, Germany, Japan, China, Belgium, Australia and the UK.

Stay tuned to our live blog GuinnessWorldRecords.com, the GWR YouTube channel and #GWRday to be the first to know when a new record is broken.