Ivan Moreira and his dog Bono broke the record for the Longest Stand Up Paddleboard (SUP) ride on a river bore by a human/dog pair, for their impressive 1,690.5 meter (1.05 miles) journey down the Mearim River in Arari, Maranhão, Brazil, earlier this month.
Ivan, who is based in Brazil and considers surfing his lifelong passion, has been practicing the sport since the age of five. Once he got Bono, his 5-year-old Labrador, he wondered what it would be like to ride on a Stand Up Paddleboard with him.
The pair have been practicing their hobby together since 2012, when Bono was just 6 months old, and Ivan has even taken his pet to the annual Surf Dog Competition in Huntington, California where they won First Place in the Tandem Finals. 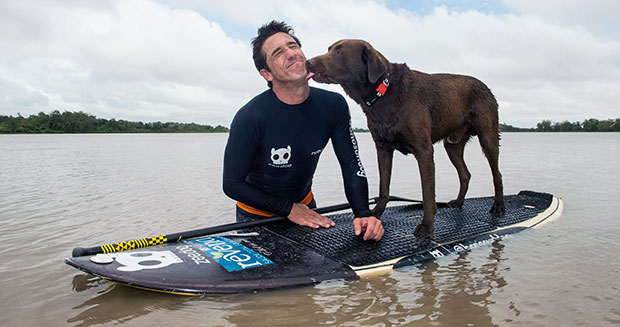 Apart from catching waves together, Ivan and Bono also enjoy volunteering for the Ronald McDonald House charity and receive great gratification from helping those in need. 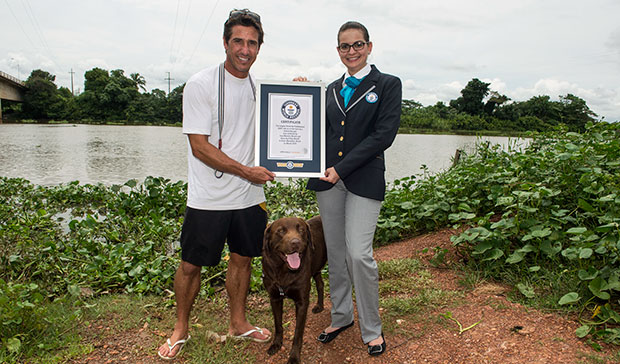 The record-breaking duo receive an official certificate from Guinness World Records adjudicator Raquel Assis
Ivan and Bono are the first human/dog tandem to hold this record, and when asked how it feels to be a record holder, Ivan said: “It is a great feeling to achieve this title especially because I get to share this achievement with Bono. I dreamt about this since the first time Bono rode in a Stand Up Paddleboard and I feel very happy to have accomplished it. Being with him completes me and fills me with all the good things in life."